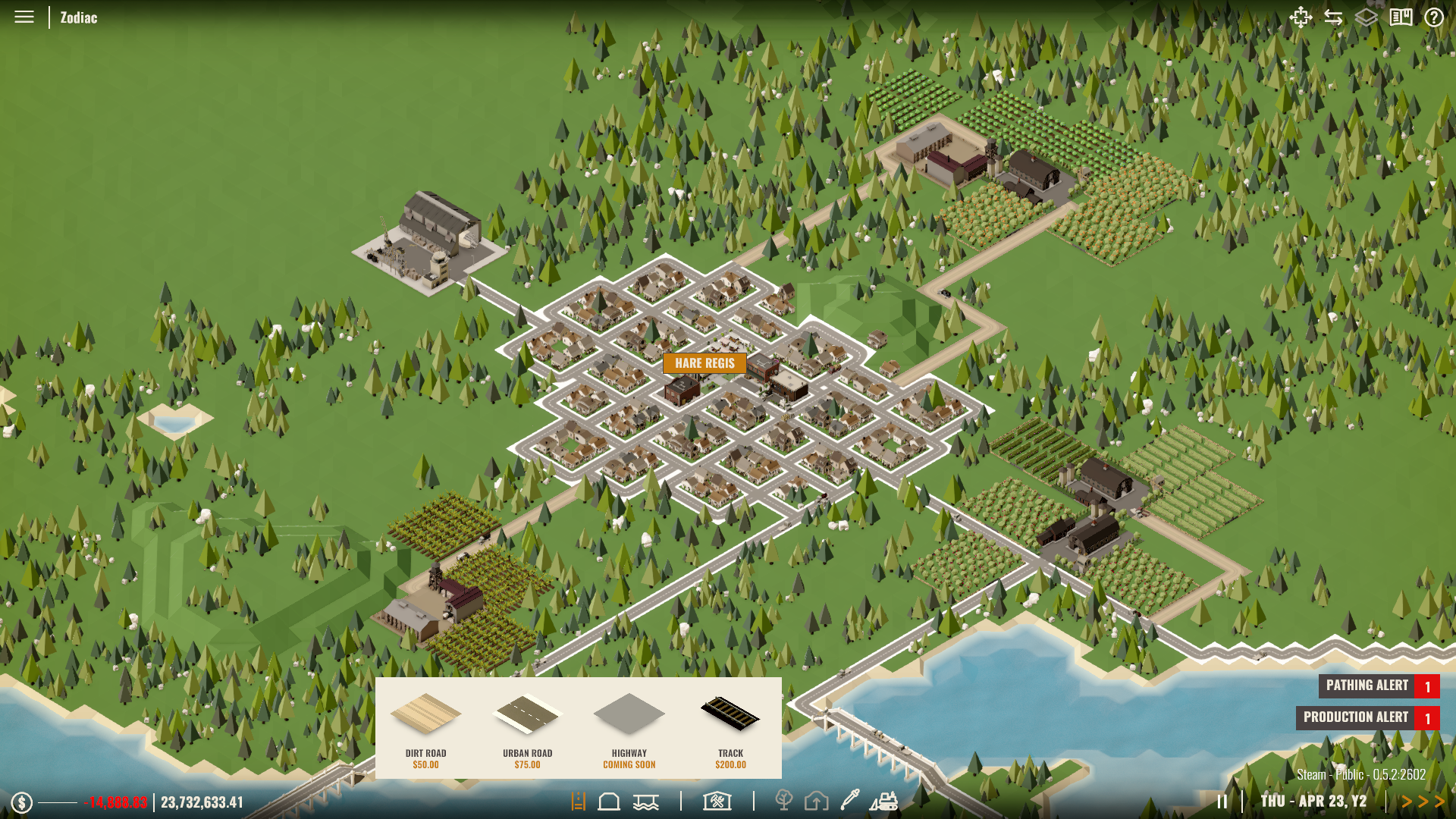 The joy which Tycoon games foster is generally rooted in a consistent sense of progression, of watching something you’ve nurtured grow into a booming empire, of overcome obstacles and skillfully navigating the tides of business. While many tycoon games can blend together, relying on themes in order to differentiate themselves, Rise of Industry brings multiple elements to play in a challenging way, combining maps unique to each playthrough, a fresh approach to supply and demand, rival corporations and the advancement of technology within the game itself.

The depth and breadth of the complexity inside Rise of Industry is exciting and incredibly rewarding to master. Each map is unique, generated anew for each play session, with districts, cities, towns, and rival corporations. The graphics are simplistic but attractive, providing a great deal of info while zoomed out, and more eye candy, and even ambiance sounds, such as chirping birds, when zoomed in. Before building your empire, you’ll need to study the map to identify resources (press tab for a quick view of what’s available!) and identify what products the different towns and cities want to buy before moving on to purchase permits in order to set up your business, and then decide how to best situate your facilities in order to quickly ship your products without annoying your customers by inflicting your farms and factories on their peaceful suburban lives. Setting up camp too close to a city makes for a bad relationship, as you hog resources, clog roadways, and potentially spew pollution; on the flip side, the further you are from a city, the longer it takes and the more expensive it is to transport and sell goods, so careful planning is absolutely necessary.

One of the most interesting elements of this game is your relationship with towns. Selling products and goods to farmers markets and hardware stores increases your influence over that town, and at the same time, the population grows when you supply the goods they need. At the same time, too much of a good thing can flood the market, causing the price to plummet, leaving you selling at a loss. There’s no room for one trick ponies here, the survival of your business empire will rely on constant innovation, diversifying products, and using roads, trains, and even zeppelins (more on that later) to move products to new and different locations.

Unlocking new technologies is also vital, and once again, requires no small bit of planning. The more work you put into an industry, the more you learn about it, passively earning Research & Technology points. By investing these R&D points into new buildings, you unlock new types of innovation as well as passive boosts. Farming is a great way to break into the game, but there’s only so much demand for oranges. When you start producing more fruit than any one town could eat, it helps to have already invested in a lumberyard and a papermill, allowing you to create the cartons which can hold orange juice, enabling you to use those oranges in a new way, thus opening up a whole new market. Of course, that requires moving a lot of resources around, a process which can be slow and congest your roads if you have too many trucks going to different locations, so it’s just as important to invest in infrastructure.

Moving products around is an industry all by itself, known as Logistics, and it even has its own dedicated research and development branch in the game’s technology tree. Starting out with trucks and dirt roads, you can expand operations to include sprawling warehouses, upgrade to blacktop roads, construct railroads, build bridges and tunnels, and even take to the sky in zeppelins. I know it sounds silly but seeing the sky filled with giant balloons hauling goods clear across the map is so much fun, and such a delightful nod to how futurists once envisioned the future of air travel. Transporting goods is expensive, regardless of the method, and Rise of Industry has created multiple ways to handle this, though none are quite so rewarding as the Trade Route. These are special vehicles which can move product around the map in a more cost effective way, but they do come with their own set of rules and restrictions. Each transport can only hold so many types of products, and while you can dictate what leaves the truck where, you have less control over their destinations, and their pickups can potentially conflict with your regular farm-to-market deliveries, if you don’t keep an eye on your supplies. It’s one more layer of complexity which can either trip you up or help you become world economic power.

If everything sounds overwhelming, then you’re not far off the mark. My first few attempts at building a manufacturing empire ended in disaster because I didn’t diversify enough, or I didn’t utilize trade routes, or I just flatout made bad decisions–and that’s ok! There’s lots of ways to fail, but just as many ways to pull yourself back from the brink, and that’s what makes Rise of Industry so exciting. There are so many proverbial plates to keep spinning that you’re sure to miss one sooner or later, and finding ways to rebound from that mistake incredibly rewarding. As if all that weren’t enough, you’ll also encounter random events, both good and bad. Maybe your county will give you a tax break, allowing your profits to soar, but it’s just as likely that your laborers will go on strike, reducing your production and your bottom line. All sorts of things can boost or hamper your progress, from natural disasters to politics, and learning to plan ahead and keep a little extra cash and product on hand, just in case fortune doesn’t smile on you, becomes just as important as keeping product flowing in and out of your warehouse.

If this somehow isn’t already clear, it’s worth mentioning that Rise of Industry is not for newcomers to the tycoon genre. The learning curve is steep, there are a number of ways to set yourself up for failure very early on in the game, and the UI will not hold your hand. While it does have a very helpful tutorial, this is extremely limited in scope, and the game itself is rather terse when it comes to notifying you of breakdowns in your industrial machine, but also where tooltips in general are concerned. Some errors are simple and really don’t need much clarification, “You’re out of storage space” is straightforward and I had no problem fixing that issue. That said, one of my trade routes produced a notice saying “Nothing being picked up at first stop,” when my first stop was my warehouse filled with excess merchandise. The game offered neither information as to why this was happening nor advice as to how to fix it, and after a great deal of tinkering and putzing, I’m left genuinely confused as to if this was an error on my part or a glitch in the game itself.

Because Rise of Industry is still in early access, I experienced the occasional glitch here and there. As robust as the game already is, it still has a whole host of unreleased content. A number of buildings, including Greenhouses, Pharmaceuticals, mines and more are not yet implemented, meaning that there is a whole host of high-level gameplay yet to be explored. I’m excited to see how these late-game industries will impact gameplay, environments, town relationships, and competitors.

Rise of Industry is already an impressively expansive tycoon game, filled with complexity and pitfalls in its mechanics, and it still has more to roll out. It’s not terribly accessible to newcomers of the tycoon genre, but there are plenty of tutorials out there to help guide you through those rocky early years. It provides any number of ways to become a master of industry, offering a procedurally generated world filled with random events, advancing technology, politics, rival corporations, and even a bit of whimsy in the form of delivery zeppelins, and a great experience for any fan of the tycoon genre.