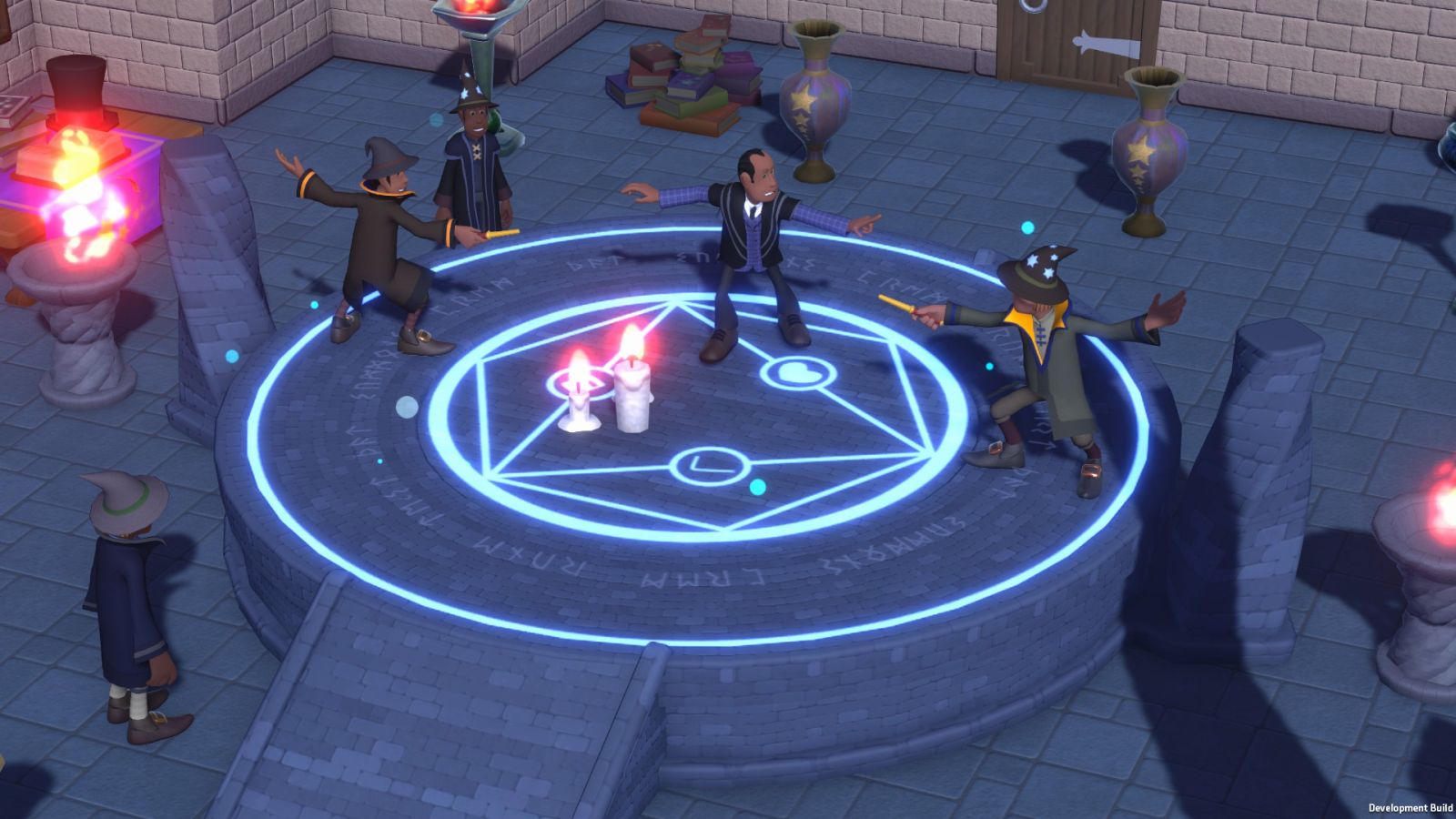 If you didn’t catch it, we went hands-on with Two Point Campus to transform the squishy-soft brains of the various kids foolish enough to walk by the school. Whether they wanted to be a Chef, the recently-announced Spy job, the Knight and Wizard professions, and many more, our job is to educate them in their chosen profession. Recently we went hands-on with the game once again, tackling the Knight and Wizard schools to see how those vocations work. Let’s dress these miscreants up like the Uninstall Wizard and see if we can cast the spell “Removicuus Moneyuus” on their pockets.

As I mentioned in our previous hands-on, the biggest change between Two Point Hospital and Two Point Campus is that you aren’t dealing with one-and-done patients. You’ve gotta “love the one you’re with”, catering to the wants and needs of the students over the course of their entire education. That means setting up clubs, activities, movie nights in the lecture halls, arcade cabinets and foosball tables, and generally actually having to “care” about them. Well, care enough to stuff them full of Cheese Gubbins and giving them a place to sleep anyway.

The first level we unlocked was Noblestead, home of the Fighting Fayre – a medieval themed school focused on preserving “Ye Olde” traditions like training knights, jousting, and more. The level starts off easy enough, asking you to plop down lecture halls and the like, but soon you’ll be putting down your first purpose-built training facilities – the Battle Grounds. At the center of the Battle Grounds is a castle tower surrounded by wooden knights for your squire/students to learn slashes, parries, and thrusts. Archery targets can also be placed because a good knight should also be a good archer. Banners, flags, and seating finish up the training area, allowing your students to get at least a base education. To round out their skills, however, they’ll also need a jousting pitch.

The jousting field is exactly what it sounds like, putting your would-be knights on horseback as they charge back and forth at one another. Perhaps somebody will get their block knocked off, and perhaps that blunted lance to the dome will drive in some education. Either way, you’ll also need a hospital and the staff to run it. Turns out being a knight is dangerous business.

One more challenge (beyond the possibility of financial ruin from banged up students) lies in wait – rival schools. Like any good college, the rival knights from the next academy over will be showing up periodically to try to knock your place down a peg. Armed with wooden swords, these ne’er-do-wells will bang on equipment, trash cans, annoy other students and generally cause chaos. Shooing them away will require specialty staff with the security badge trait. When one of your objectives is keeping the place above 85% pretty level, having smashed trash cans everywhere is gonna cause you problems.

With a single star you’ll unlock the second location in our demo – Spiffinmoore. Totally not a Hogwarts knockoff, this medieval castle is steeped in fog and mired in mystery. Well, it’s a bit of a prebuilt-with-a-problem, anyway. Arriving, you find a school that has saddled itself with extreme debt and you’ll be taking out a loan before you even get started! Naturally deep debts are a problem, but then there’s the other problem – actual and very-real curses, an arch-nemesis named Nefaria Munch (who may or may not be a homeless crazy person from the parking lot), and worse. It’s never easy is it?

As I mentioned, Spiffinmore is already built and operational, but wow is it laid out poorly. With over $100,000 worth of debt, you won’t have the cash to reconfigure – you’ve got classes and facilities to build. A potions class, featuring a massive cauldron in the center will get you started, especially since you’ll be splitting your attention between both a Dark Arts and Wizardry curriculum. Allocating your precious points, you’ll set up both of these disciplines (don’t forget, they need separate lecture halls!) as well as the supporting infrastructure. Turns out, even wizards need the bathroom. Also, it turns out that the cold is not ghosts (or not just ghosts anyway) so prepare to build out a radiator system to keep the drafty stone warm.

On every campus, the lifeblood of your school comes from research. Unlike stuffing bodies in a secret research drawer to grind out research points and knowledge, you’ve gone the less barbaric route, simply asking your folks to use their combined research to further the needs of the school. Better gadgets, sure, but also new tech and side missions. For example, the little fae creatures that live near Spiffinmore have asked you to research why they are able to ask you anything. That is to say, they’d like to know why they can suddenly speak. These little side missions can net you additional kudosh or cash to spend unlocking and buying goodies.

While we have only whet our appetites with both this hands-on and the last, what’s on offer here looks like a big step forward on the Two Point formula. The side mission stuff brings some much-needed variety, and having to create a healthy and happy environment to fill the empty heads of your woul- be wizards and knuckle-headed knights is far more fun than just asking your patients to be patient. The game is right around the corner, so we won’t have to wait long to find out how the whole thing comes together. I’m looking forward to trying my hand on a mega-college that somehow manages to mingle dragon slayers, pasta-flinging patisseries, and super sneaky spies into the same environment. It should be a blast, I just hope it’s somehow profitable.