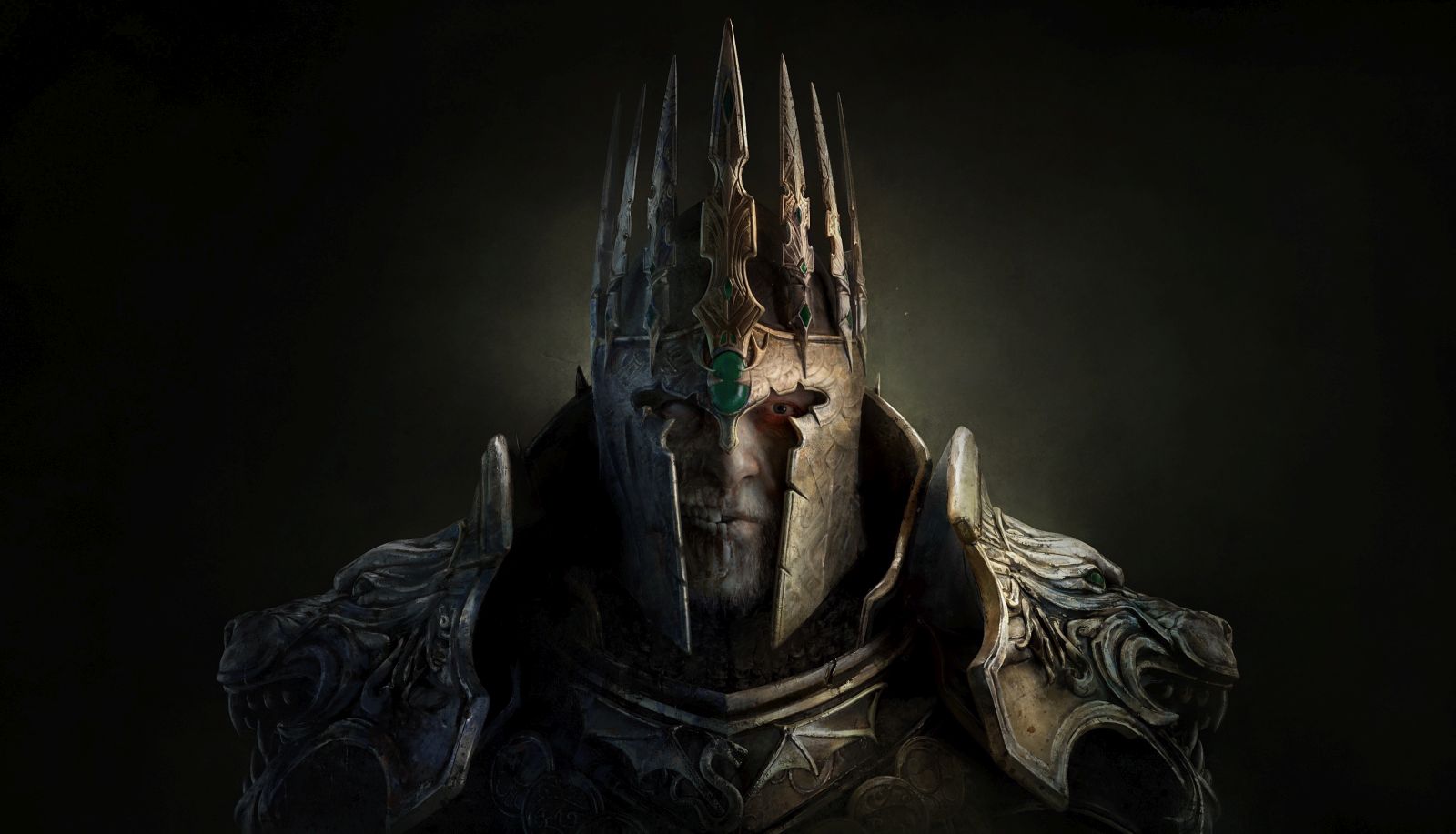 The legendary battle between King Arthur and his rival Mordred is well known. At the Battle of Camlann, King Arthur and Mordred were locked in combat and both perished. There are several versions of this tale that drastically differ, including that Mordred was fighting with Arthur, against Arthur, and even having one or both of them survive (which completely defeats the purpose of the allegory). Developer Neocore Games (of Van Helsing and Warhammer 40,000: Inquisitor fame, to name a few) have a different take on this ancient tale. In their version, King Arthur and Mordred faced off in a final battle, and both of them are slain only to rise once again, undead and full of dread purpose. It’s here that we get our first glimpse of King Arthur: Knight’s Tale.

The early access preview code I got to play came as a complete surprise as Knight’s Tale is a turn-based tactical game, but that’s just scratching the surface. As the now-undead King Arthur slowly corrupts the land, you are cast as Mordred, Hell-bent on stopping your nemesis once and for all. Facing your bitter rival, however, will not be easy, nor can it be accomplished alone. Below you’ll find a video of the first 50 minutes of the game, showcasing both combat and recruitment of some familiar faces into your new Knights of the Round Table.

A simple turn-based tactical game where you can recruit new meat for the grinder is hardly new, but Neocore has put their own twist on things. As you can see above, Sir Mordred has an alignment and motivations, but so does everyone he encounters. To that end, you’ll also face decisions at every turn. Sometimes it’s a willingness to accept someone of a different religious slant onto your team, and other times it’s a tough call on whether or not to execute a downed foe. Everything you do affects the alignments of your team. While we’ve not seen far enough into the game to see how this affects the mechanics, it is already apparent that some choices are locked off unless you’ve walked a specific path. Certain potential allies will not join if you’ve not moved more towards Pagan religious alignment rather than the Christian faiths of the time. Neocore is aiming for replayability here, but there are hints of deeper elements as you move further into the story.

Beyond binary choice, there is an entire field of irrevocable outcomes tied to your decisions. Once you’ve liberated a town and solved its bandit problems you’ll have to choose between conscripting those who remain or putting them to the sword. Both outcomes have rewards and costs, but as you’ll see below, they also have an impact on the morality of your version of Sir Mordred. The full game is expected to be between 20 and 30 hours, so we’ll have more to explore as we move towards launch. 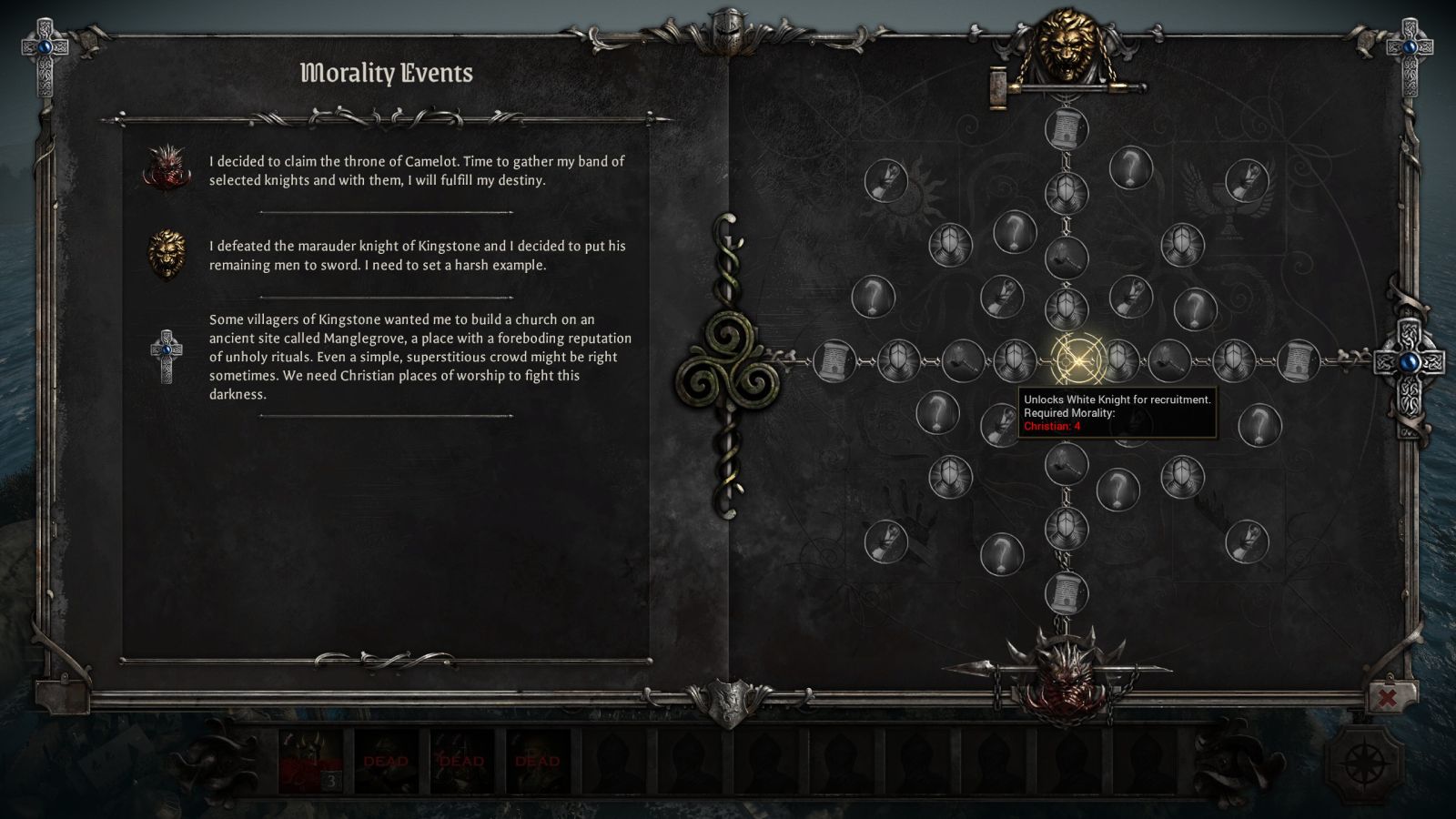 There are several classes in King Arthur: Knight’s Tale. Defenders are your heavily armored tanks, equipped with massive shields and one-handed swords. Champions wield massive two-handed poleaxes, dishing out tremendous amounts of damage at the cost of a shield. Arcanists are magicians who can sling various spells to turn the tide. Marksmen are archers who can dish out rapid-fire attacks from range. What’s different here is that each character can also be a blend of these classes, making each person you meet feel unique. Names you’ll recognize from lore often have unique powers that enable them to devastate the field of battle with signature attacks. I don’t want to ruin the surprises, but there are more than a few familiar faces.

As combat can occur nearly anywhere on a map, there are six formations for your characters to help ensure you’ve got the right troop placement for when all hell breaks loose. For more anticipated battles you’ll run into a series of red Xs that signify that, when crossed, you’ll be entering battle. This lets you place your troops like you would in XCOM for maximum effectiveness. 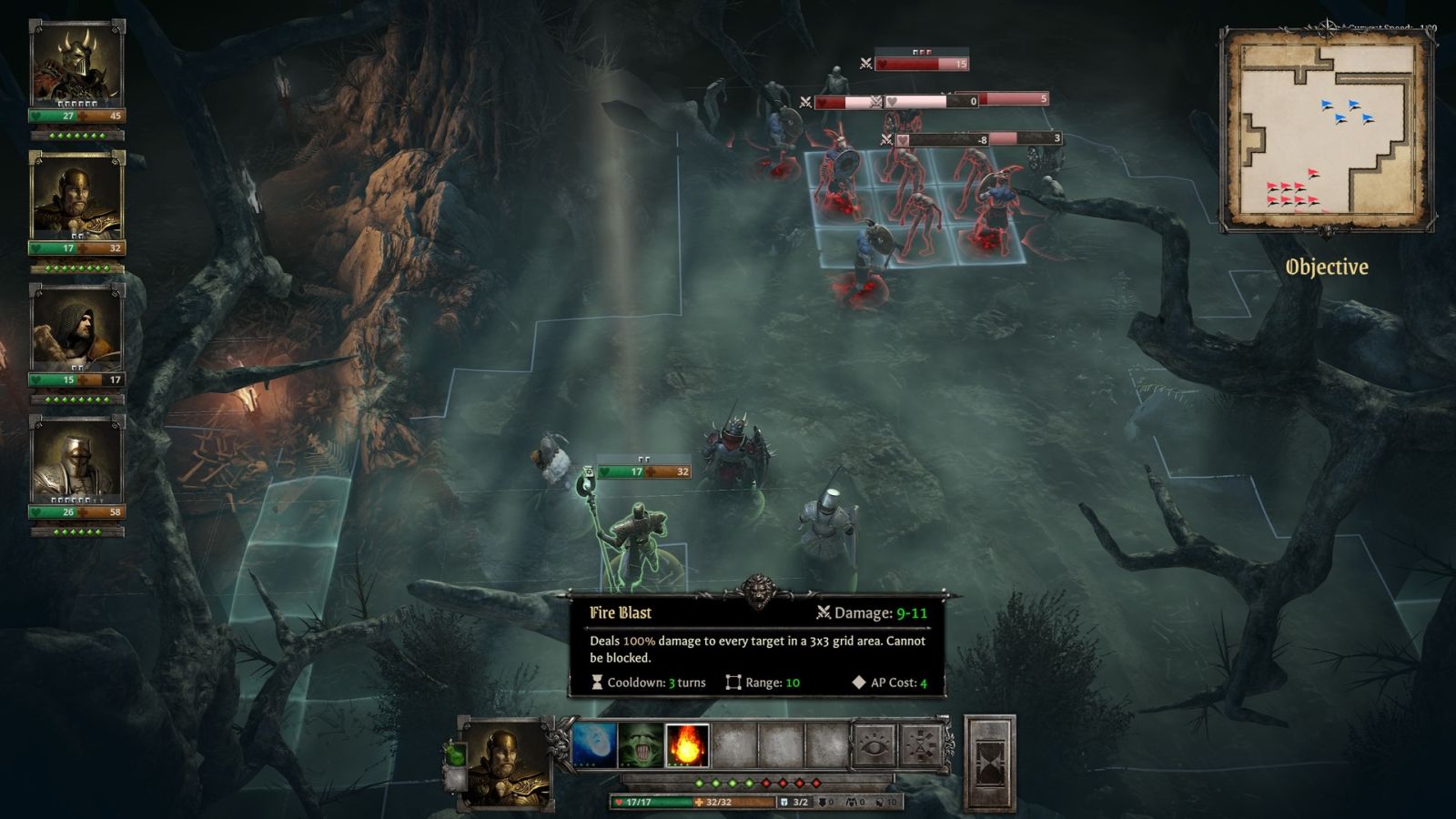 In combat, line of sight matters. Your archers don’t lob arrows into the air to land on their target above, instead taking a straight shot at whatever target is in range. This means having a big bulky knight directly in front of an archer will almost certainly prevent them from being effective. Similarly, some characters can attack with wide sweeping moves that hit multiple people. Be mindful, however, as being hit from behind will trigger backstab levels of damage. Placement is important, as is movement and situational awareness.

When you cross swords with the enemy you’ll see the new mechanics for health and armor. Armor rating, hit points, and vitality make up the overall “health” of your character. Armor is literally how much steel is between you and incoming damage. Hit points are the total health damage you can take before you start taking vitality damage. Vitality is deeper wounds, and when vitality reaches zero your character dies. Campfires you stumble on can either restore a portion of your health, or you can spend the time reinforcing your armor, but it will make you think twice before you engage in optional skirmishes as a full recovery isn’t possible until you return to your home base.

To mount an effective attack against King Arthur and his armies, you’ll need a staging ground of your own, and what better place is there than Camelot. Re-inhabiting the legendary castle, the game shifts gears and you’ll suddenly find yourself managing which buildings to restore the site from ruin, as well as deciding how to spend resources on upgrades for each building. Here’s a quick video of Camelot and the upgrade mechanic at the start of Early Access.

Truthfully, I could go on forever about all of the unique mechanics and gameplay elements that lie ahead for this game. An endless pile of loot for each character that affects their stats. The way permanent death can force you to be far more careful than you might otherwise be. The mythical monsters and truly evil people you’ll encounter. All of it scratches the surface, and doesn’t even shine a light on the best parts — the combat. The fact of the matter is that King Arthur: Knight’s Tale has a long way to go, just recently finishing its Kickstarter campaign, but what is here is already very impressive. If you are a tactical combat fan, this game needs to be on your radar.

King Arthur: Knight’s Tale is available on PC (with PS5 and XSX planned later) in Early Access starting by the time you read this preview! Enjoy, and tell us what you think.