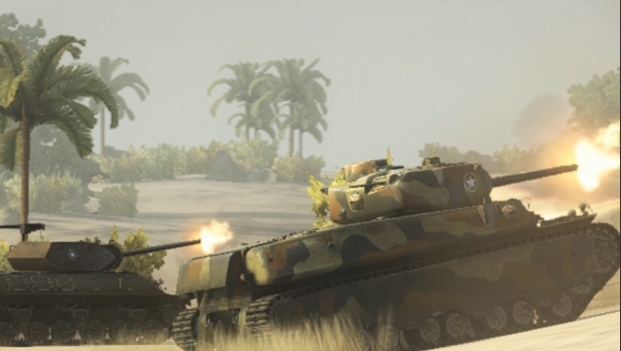 The arena of free-to-play(F2P) games is a fairly new one for me. I find that I lose interest – the fact that I haven’t had to shell out my hard-earned cash means that I don’t perceive loss of value in walking away from them. I believe it may be this very thing that also lets me carry on with my Steam backlog of shame – but I digress.

I’ve never played World of Tanks, though I shared a flat with several GT contributors during E3 2013 who were very much into the PC version, and they attended their E3 booth. With that much interest involved on the team, I moved on to other things thinking it would simply be something I didn’t need to concern myself with.

All of that changed when I was tapped to play and write up a preview of the upcoming F2P XBL version (which at the time of writing is still in beta), and my appreciation for their efforts have gone up immensely. That isn’t to say they’ve converted me, or that I’ll be spending every waking hour working to build enough experience to unlock the next tier tanks – but I certainly did enjoy my time. [singlepic id=17187 w=620 float=center]See, when I went into it, there were a couple of “a-ha” moments for me – the first being that with my lack of experience didn’t punish me for dying – in fact, there is no penalty for dropping out of a match once you were toast. This means you can grab a different tank in your collection and begin anew, while waiting for the first match to finish and pay out your experience. This is incredibly smart – it keeps things flowing even when you fail.

The next big thing, for me, was the strategy. I expect map knowledge to make a real difference in the FPS genre, and this seemed like I was driving an invincible shell of metal and shell-launching death. Yeah, I was, but only to the buildings and shrubs – everyone else also had these war machines. Quickly I learned that hiding and gaining advantage is more about placement and flanking than full-on assaults. This element was punctuated after an artificial inflation of my wealth (so I wasn’t restricted to simply giving impressions of the first step on a very tall ladder).

[singlepic id=17182 w=620 float=center]All I can say is wow. When you begin, you are poking around with one or two other light tanks, hoping you have enough people to cover both the base as well as maybe going on the offensive. People don’t seem to talk to each other, and if you’re lucky the other members of your squad will do more than just simply drive down the road to kill the enemies head-on. Hop up to the seventh tier, and you’ll have 16 other tanks playing – and a balanced mix of the different types. From the light, medium and heavy tanks to the tank killers such as the Wolverine or even the ballistic war machines, the teamwork and effort that I witnessed was second-to-none.

I had asked several veterans what I should do to really get into the game, and the advice I got time and time again was to simply drive around and learn the maps. Tank warfare is all about having the right ground, the escape routes and placement. There is no bunny-hopping folks – or at least, for those who put the time and effort into the game, it gets weeded out quickly.

There were a couple of minor issues I ran into while playing the game – the beta only includes a random match-making and you can’t even select the type of game. Sometimes I would wait upwards of three-to-four minutes to get into a match. Granted I wasn’t playing at peak hours, and World of Tanks is still in beta, but if the interest in the game is low, the game could become a ghost town. The free aspect should influence that though – I can’t see this happening for a very long time.

[singlepic id=17183 w=620 float=center]The work on the UI is obvious – screens from a play guide they sent me are vastly different from the current working version – clearly Wargames West is still fine-tuning the game interface. They’ve flattened menus to keep people engaged, and while they’re doing just fine I’d be remiss in my duties if I didn’t point several issues out.

The skill tree is deep, complex and key to progressing in World of Tanks. I spent quite some time investigating branching upgrades – what would I need to get an M4, for instance? Well, you progress from left to right on the research section, and the swim lanes interconnect. Just because you own the vehicle to the left does not mean you can buy the next one – no, you will need to go into the current tank and research one or more technologies to the get to the next tier. This uses up experience (represented as a silver star)- and that’s a great idea. You don’t even need to buy the upgrades with your silver – simply knowing them unlocks the next level.

[singlepic id=17189 w=620 float=center]The problems I had with the research section are twofold : one, the purchase and values weren’t always clear – for instance, understanding that gold is the currency to can purchase with real money VS silver which is what most purchases are based on, and the aforementioned experience stars are not clearly laid out – and some may find that frustrating.

The next issue is the interface – not all vehicles are clearly marked as to which class they belong to, nor are there any glamour shots to appreciate the differences before you buy them. Moreover, the descriptive text is shoved to the side rather than allowing us to put it front-and-center so we can appreciate the research that went into this – and that also goes for the upgrade steps. All cosmetic, and not one of them a deal-breaker, but since we’re talking about a beta product these are elements they could address to make the game more approachable.

[singlepic id=17181 w=620 float=center]If I were to pick out my least favorite part, it would be that there is no option to manually select how much gold to convert to silver. What I mean by that is that you have to hold the left stick down to start adding gold to the conversion – and while it speeds up initially, it can take quite a long time to convert cash (over two minutes to convert a paltry 5000 gold). Even if typing isn’t the way to go, perhaps having a number wheel for every column, or some other variant to help folks better control their experience.

Controls and gameplay are rock-solid, and the game looks really good for a free-to-play title. There isn’t a whole lot of competition in either the tank-sim genre or even the F2P arena on Xbox Live, and Wargaming has done a masterful job of creating an approachable and scalable experience to Xbox Live gamers. With a few tweaks to the user interface, along with more content (I believe that British tanks will be available in the final product) they’re right on track for a hit release.