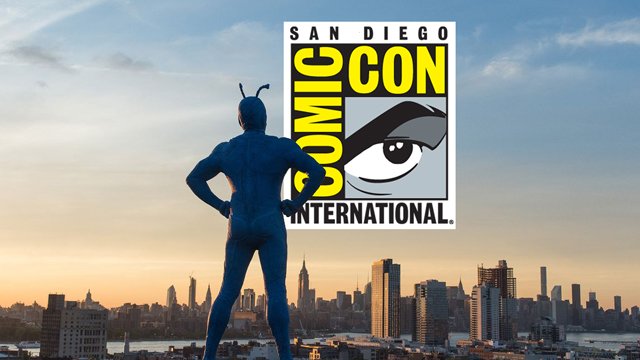 Amazon’s installation for their upcoming original series, a live action remake of The Tick, seemed average enough at first. We entered into a shaded pavilion full of fans blowing blessedly cool air to charge our phones, answer trivia questions, and watch the pilot episode of The Tick. Answering trivia, both about The Tick and Amazon Prime and its services, earned us goodie bags full of Tick gear, including a hat and a cell phone cover which sported blue antennae.

We soon found ourselves in a second pavilion located behind a twenty foot recreation of The Tick’s head and antennae, where a series of levers allowed us to control the position of The Tick’s impressively expressive antennae. We watched as the enormous animatronic appendages slowly moved into new positions, suggesting what was being said, or what he had seen, to cause that new emotion.

At last, our small group was ushered into a final instillation, a building which looked oddly like an old fashioned diner. A young man sat at the counter, eyeing us with obvious annoyance before deliberately ignoring our presence to focus on a newspaper. We stood in quiet confusion, when the experience suddenly stopped being average. A monitor over the man’s head flickered on, The Tick’s lovable and far more practical sidekick, Arthur Everest, played by Griffin Newman, appeared on the screen. He was winded, and clearly in a rush, and had a message from The Tick himself: We had a mission to do, and very little time to do it.

Two people in suits burst into the room, shouting for us to go, go, go! Hurry, there’s not a lot of time! Without warning, a challenged-based scavenger hunt began, sending us darting from Goat’s Deli straight into Arthur’s apartment, where we scrambled to find clues to help The Tick take down a group of evildoers. Clues came in the form of hidden sensors which we ‘collected’ by tapping scannable bracelets to them. Part test of observation, part competition, we all rushed to find interfaces, which were hidden in all number of ways: inside items, behind documents and even stuck to the underside of a drawer. Each person had to try and prove themselves the most worthy of being a hero by collecting more clues than anyone else; we also had to prove our knowledge of The Tick, as some clues were ‘locked,’ and could only be acquired by correctly answering a trivia question.

Our mission began in the Goat’s Deli with Arthur delivering message from The Tick himself!

After gathering clues from The Warehouse, another iconic location from the pilot episode, we were rushed, with much shouting, into The City Police Station, where cheering cops applauded our efforts, which enabled them to catch the baddies. A final scan of our bracelets revealed our super powers, I am apparently the Invisible Woman, which I assume means I didn’t do terribly well, though our exact rankings were never spelled out. In a fitting end to the experience, each Citizen was ejected from The City and back into reality in a blaze of glory.

Kay Purcell at The Tick Takeover at SDCC

The Tick Takeover was one of the more involved and entertaining installations I’ve experienced at a convention. What started out as a place to cool down turned into a very involved and oddly adrenaline filled experience which sent me home with a Tick convention backpack, several pieces of bright blue, antennae topped swag, a customized The Tick tshirt, and a bottle of water — a gift prized and appreciated by con-goers more than most anything else. The Tick Takeover Experience is free to the public, no convention bag required, and is located at the corner of 1st street and J, just across from the San Diego Convention Center. The Tick hits Amazon Prime on August 25th, so you’d better make sure your Amazon Prime membership is up and running if you want to watch it, Chum.