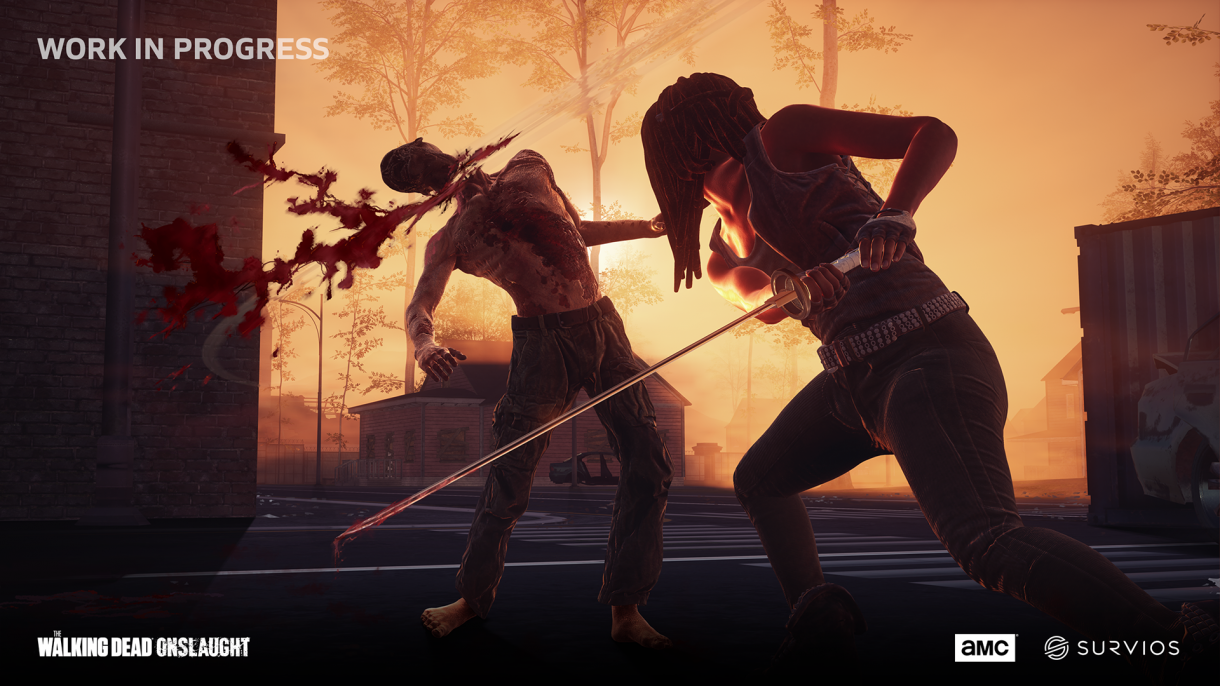 Ok, I’m going to admit it: I haven’t watched a whole lot of AMC’s The Walking Dead, but that’s not why I’m amused and a little mortified when I think of my time playing Survios’ upcoming game, The Walking Dead Onslaught. I’m well versed in a wide range of zombies, from my time with a horror B-movie club in college to the unique flavor of zombies found in Vampire Hunter D, from The Walking Dead comic book to World War Z and Game of Thrones. I’ve had more than a few run-ins with various flavors of the undead, and I really do enjoy little more than making them even more dead.

Before I put on the visor to test my mettle against the walkers, I was asked not once but twice if I was okay with gore. I knew I’d be fine, and that’s not why I feel myself flush with embarrassment whenever I recount the story of my time with the game. That said, it was a very, very good question to ask of anyone jumping into the game, because holy brian eaters, Batman, is this game brutal!

The Walking Dead Onslaught features, I am not joking, a progressive dismemberment system which allows you to hack zombies apart at any joint. It also features a “gore mesh” underneath each walker’s skin (once again, I’m not joking), which creates a realistic splatter no matter how you stab or slice into them, and allows you to do things like carve your initials into a dead body, if you’re into that sort of thing. But the insanity of it all doesn’t end there; you can also grab and restrain a walker in order to deliver brutal precision attacks, setting up the iconic hold-em-by-the-throat-and-punch-them-to-death scene, as well as an impressively robust impaling system. Not only do walkers react when stabbed, depending on how you swing, your weapon can actually get stuck inside their body, and the controllers deliver a delightfully disturbing tactile feedback in the form of a slight but telling vibration. At one point, a dead walker’s spine actually got stuck to my machete and did not fall off until I had lifted it several feet into the air.

But I’m getting ahead of myself. 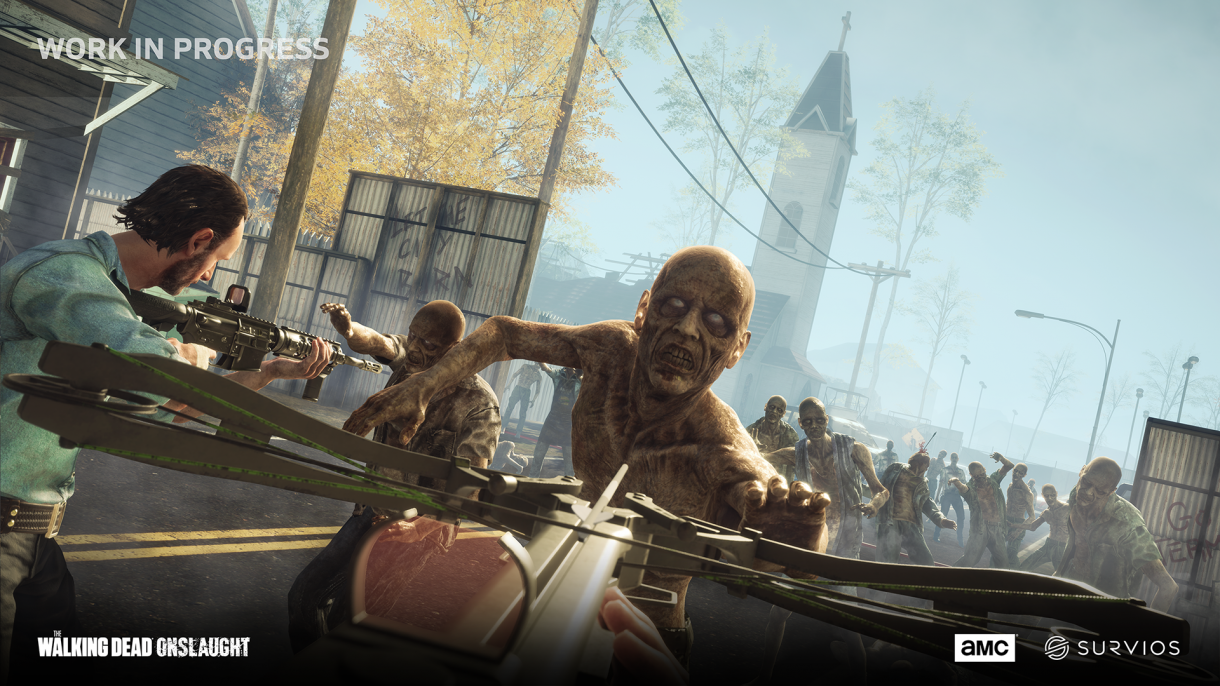 The Walking Dead Onslaught invites players to step into the shoes of the survivors of AMC’s The Walking Dead. You’ll explore the post-apocalyptic world and survive against the relentless threat of the walkers in this exclusive, original story. I got to experience a little bit of the story in this demo, and was also able to use four different weapons: a machete, a shotgun, a pistol, which delivered a very satisfying number of headshots, and Negan’s iconic barbed wire-wrapped baseball bat–and yes, you can swing it two handed, which is how I nearly took someone’s head off during the demo. More on that later.

The game itself is pretty straightforward. Follow the instructions from the guy on the radio, make your way down a fairly linear path to a predetermined destination, kill walkers and loot everything in sight as you go. Movement is achieved through Survios’ Fluid Locomotion system, which we saw in Sprint Vector; basically you swing your arms, as if walking, in order to move through the virtual space. Combat comes in two forms, ranged and melee. You can keep one ranged and one melee weapon on you, and you can switch between them by reaching down to your hip and pulling the trigger. Ranged is pretty simple: grab a gun (or crossbow), aim, and pull the trigger to fire. Melee, now this is where things get fun… and dangerous.

The machete proved to be an excellent tool for hacking walkers to bits, and preemptively decapitating the ‘dead’ bodies which often sprawled on the ground, waiting for you to walk over them before they spring back to life. (Of course I’m stabbing that thing before I get near it, this is not my first zombie rodeo!) The pistol also doubles as a melee weapon; if you run out of ammo, you’re free to pistol-whip the undead back to death, something which is incredibly satisfying when paired with the throat-grab technique in the game. 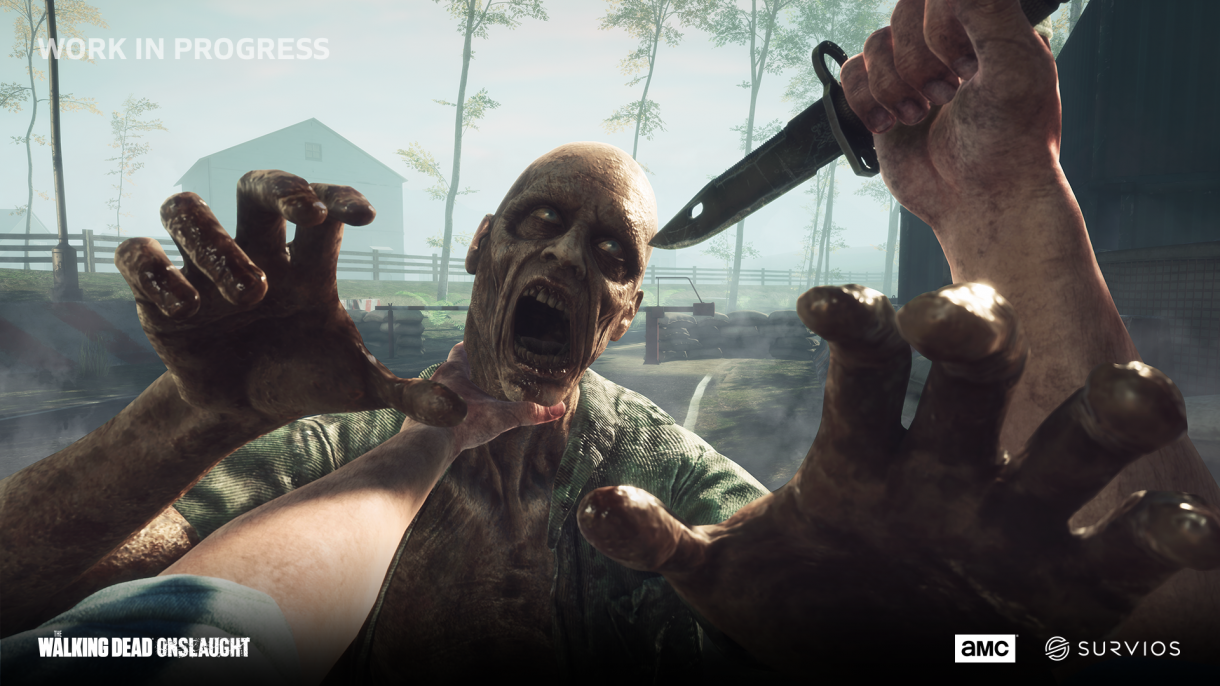 Before I go any further in this writeup, I would like to point out that the demo for this game took place in a rather small and temporary space. The Oculus censors were forward facing, and with the chaos of zombies coming in from all directions, I turned myself around a number of times, and the good folks at Survios often had to jump in and redirect me so I was facing the sensors. The problem was… this kept happening while zombies were swarming at me. From all sides. I could hear them speaking, I knew they were coming to move me, but The Walking Dead Onslaught is just immersive enough that there was a survival instinct which kept rearing its ugly head.

What I’m saying is, through only a minor fault of my own, I punched the game’s director. Possibly more than once.

And things didn’t end there.

At last, I had made my way to the final stretch of the demo, where the iconic baseball bat was waiting for me. I ditched the machete, snatched up the bat, and smacked a few walkers around.

“Bring your left hand up!” suggested the good folks at Survios.

Much to my delight, my left hand snapped to the handle of the bat, and you’d better believe I was going to fell a good number of walkers with a two-handed swing. Grinning like a crazy person, I took a test swing, then spotted a zombie shuffling towards me. I wanted my first swing to be entirely satisfying, so taunted it as I waited for it to bring itself into my range. 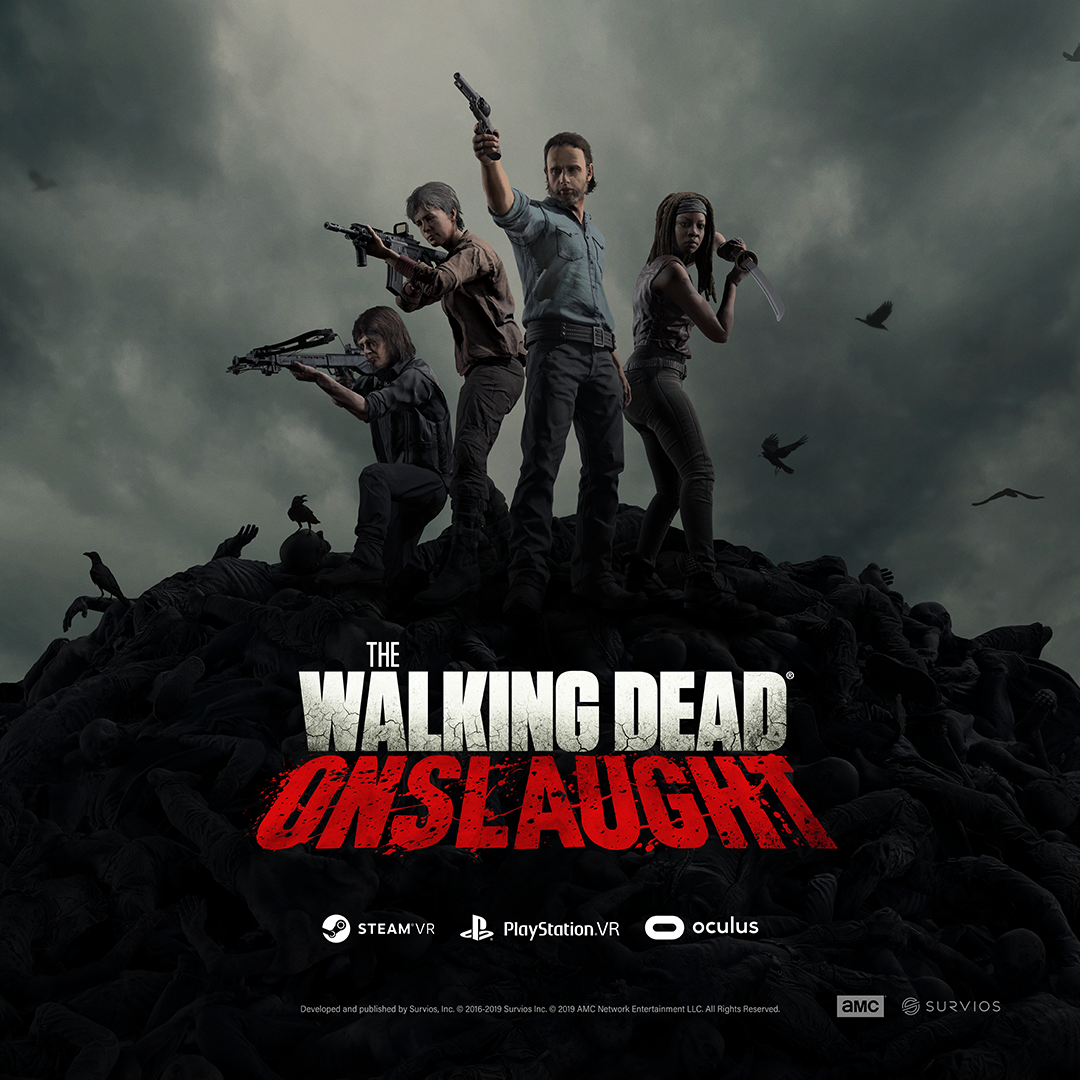 “‘Sup, bro?” I asked the walker before delivering a perfect swing, cracking its skull, snapping its neck sharply to the side, and sending its rotting form crumpling to the ground.

Laughter erupted all around me. I was confounded until someone collected himself enough to narrate what had just happened in the real world, you know, the one outside the visor.

“She just looked directly at me, said ‘Sup, bro?’ then took a swing at my head!”

Keep in mind that I had already punched at least one person by this point. I was already mortified when another voice replied, “Sounds like you got a warning, bro.”

I walked away from The Walking Dead Onslaught unscathed, a little high on adrenaline, and managed to cause only the slightest of bodily harm to other people in the process. It really is an engrossing, hilariously gory, delightfully challenging experience, if you’re into the terrifying, the undead are coming to eat you alive and will explode into gory bits when you kill them kind of thing. It’s not for the faint of heart nor the squeamish, should not be played in close quarters, and apparently comes with the very real risk of hitting another human being in the real world.

That said, I do think I’d punch someone for the chance to play it again. Fortunately, that shouldn’t be necessary as The Walking Dead Onslaught will be coming to the Rift, Vive, and PlayStation VR this fall. Visit Survios’ website for more information, and be sure to check out our E3 coverage for more hands-on gameplay and interviews from the convention floor.