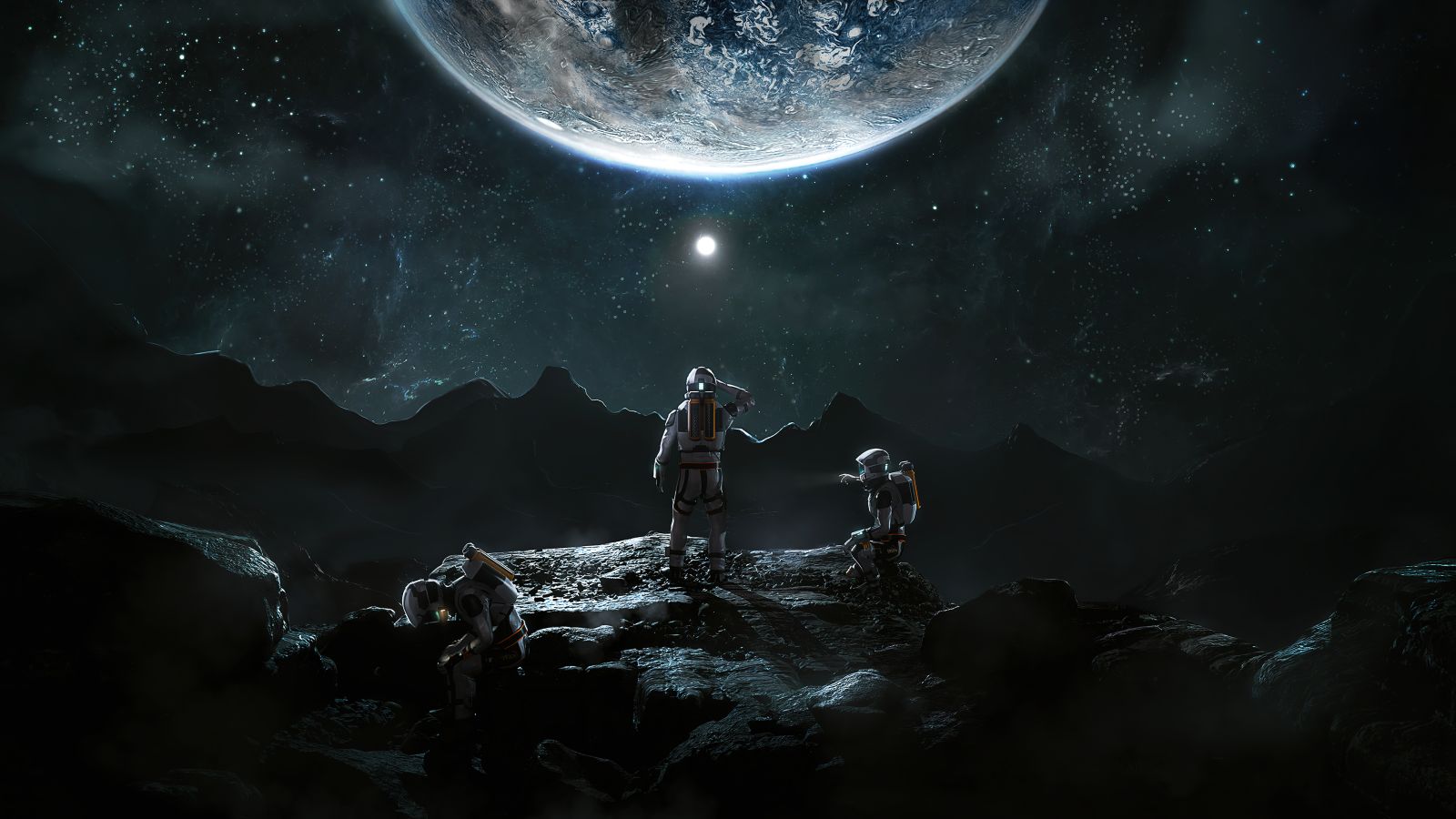 Neil Armstrong once said about his experiences in space: “I didn’t feel like a giant. I felt very, very small”, and The Pioneers: Surviving Desolation captures that perfectly. Your travel among the stars is off to a very rough start. While your last thoughts may have been one of excitement and a little bit of trepidation for the future, what you woke up to is nothing short of confusion and abject terror. Alarm bells from your escape pod ring out amidst the hissing of the hatch opening into the cold vacuum of space. You and two more of the crew of the Io have crash landed on an alien planet. As your oxygen rapidly depletes, whatever thoughts you had about the future instead turn to the immediate goal – survive.

The Pioneers: Surviving Desolation is a survival resource management game pitting the player against the unforgiving and desolate rock of this mysterious planet. A few scattered resources are strewn across the crash site, but your first order of business is to find the rest of your team. You can go far alone, but far further together. Finding their cryopod with the help of your AI robot advisor L’ia, you’ll need to take your first leap of faith. 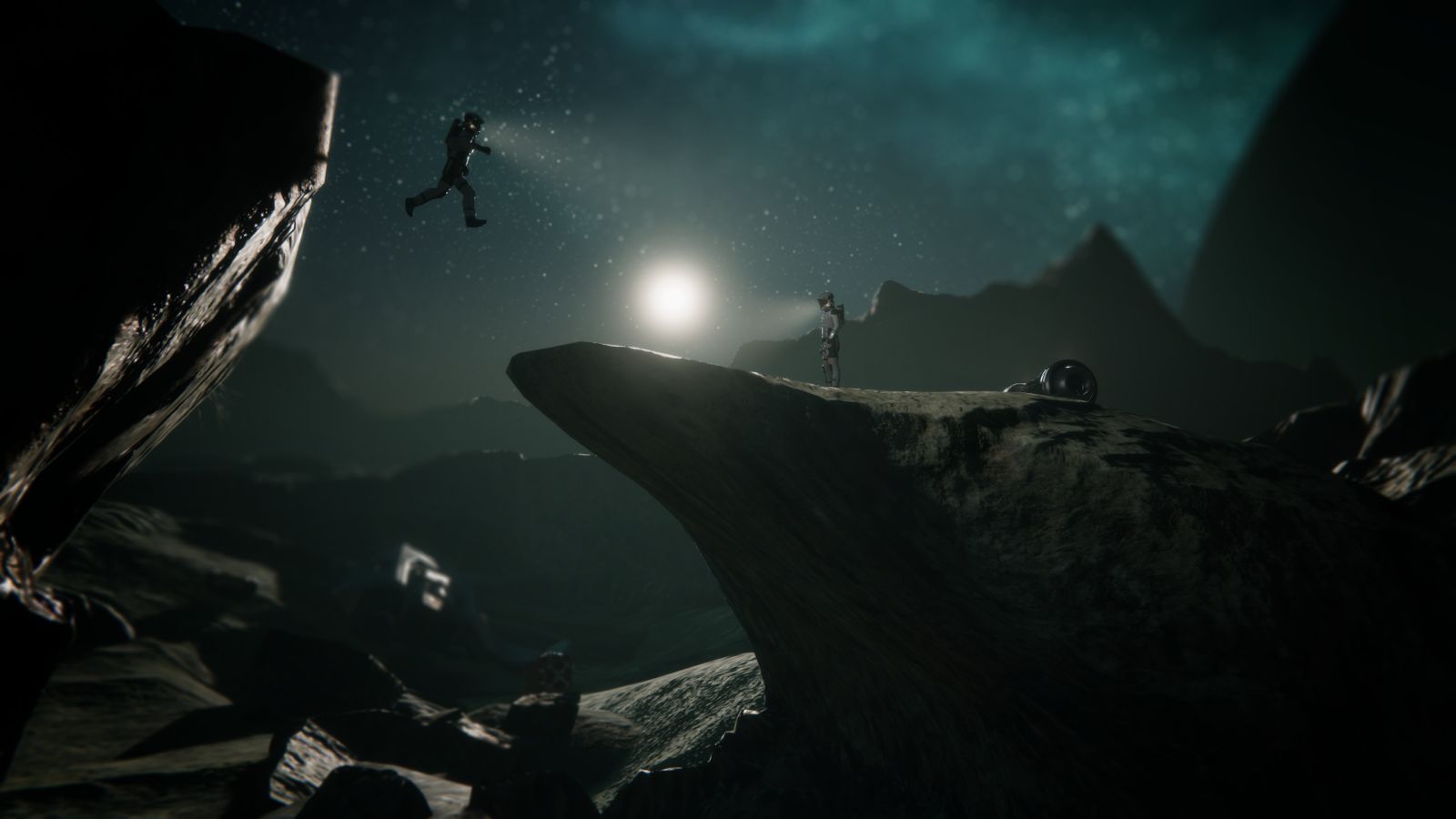 There is almost no gravity on this planet, and right clicking on your characters will prompt you with a cursor that will allow you to jump across vast chasms. The further out you go, the higher the risk of injury, so be mindful of where you leap. Similarly, you can climb up surfaces with handholds, but you’ll want to be mindful you don’t run yourself out of stamina lest you fall.

Trekking nearby, the team stumbles on a decommissioned base station! Jared Foster, our Mission Commander, starts to power up the reactor. It sputters to life, as does a nearby material printer nicknamed “Maggie”. We set Maggie aside for a moment as we had a more immediate need. With less than two minutes of air left in their suit, my crew was able to top off their O2 levels. Now we could turn to our next task – recovering our third party member, and building a sustainable ecosystem while we worked to repair our downed spacecraft. 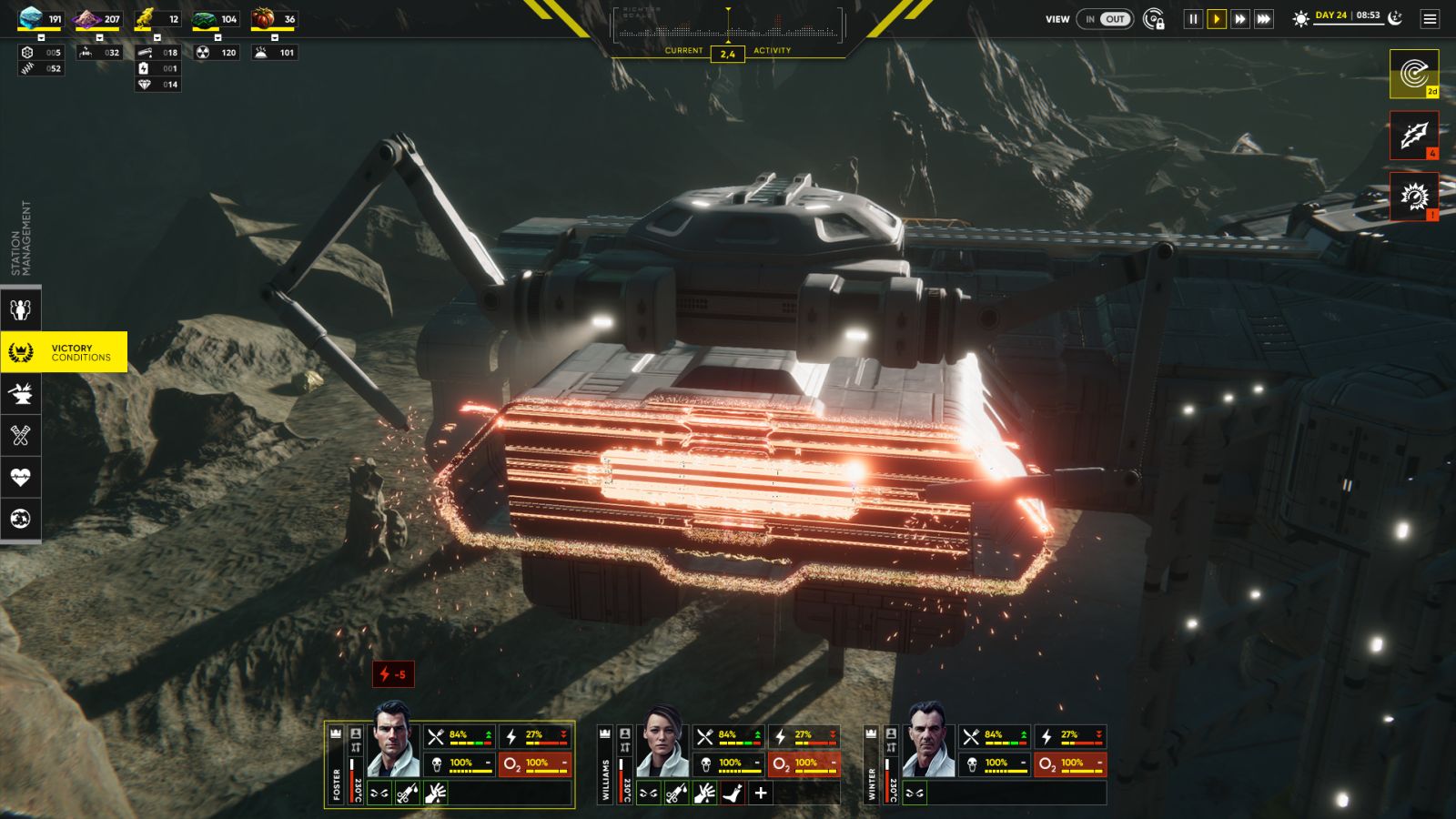 Ryan Stephenson, the CAPCOM for my crew, approaches Maggie and I see that he has a 5 on his computer skills. Each character has eight skills, and everyone carries their own strengths and weaknesses across the disciplines of Repair, Drilling, Electronics, Medicine, Computer Science, Agronomy, Athletics, and Crafting. These, along with the four stats (Hunter, Tiredness, Mental Health, and Oxygen) for each character govern how well you’ll transition from surviving to thriving. Using the right person for the job can make a world of difference.

I did have to give a laugh to my survivor collection. Each of the five selectable potential crew members slightly resemble a few real-life actors and actresses. You can take Discount Blake Lively, Discount Henry Cavil, and Discount Idris Elba, or you can bring Discount Skeet Ulrich and Discount Old Benedict Cumberbatch. No matter which “We have those actors at home” version you take, they each have their own strengths and weaknesses you’ll want to consider beyond your personal desire to bring Superman on your deployment.

With Maggie in full swing, the team got four different manufacturing modules setup and deployed in a freshly-deployed new station arm. While we hadn’t yet recovered our third crew member, we suddenly had a different problem – the other big differentiator for The Pioneers: Surviving Desolation had reared its ugly head. We all braced for severe seismic activity – an earthquake was imminent!

There was little I could do, but two sectors on the planet’s surface split open, pouring hot magma everywhere. Not only did it cut off sections of the map, it also made movement far more dangerous. I’d have to factor this in for future excursions. Similarly, I had to mind the de facto third member of my tribe as electromagnetic storms could damage Maggie if she was building as these electrical pulses ravage the surface. Nothing is ever easy.

The Supercube team is a French speaking team. I know this as there are still a lot of untranslated French instructions, even with English selected. The usual performance issues on load are present and accounted for, with framerates dropping to zero occasionally, even on moderate hardware. All that said, for a game just entering early access, it’s remarkably solid. The graphics are gorgeous, and the lighting effects are some of the best I’ve seen in the genre. Animations are smooth, looking smooth and slow when in low gravity, and normal speed and properly rigged when under full gravity. The team clearly wants to differentiate these moments, and they are well-reflected even now. 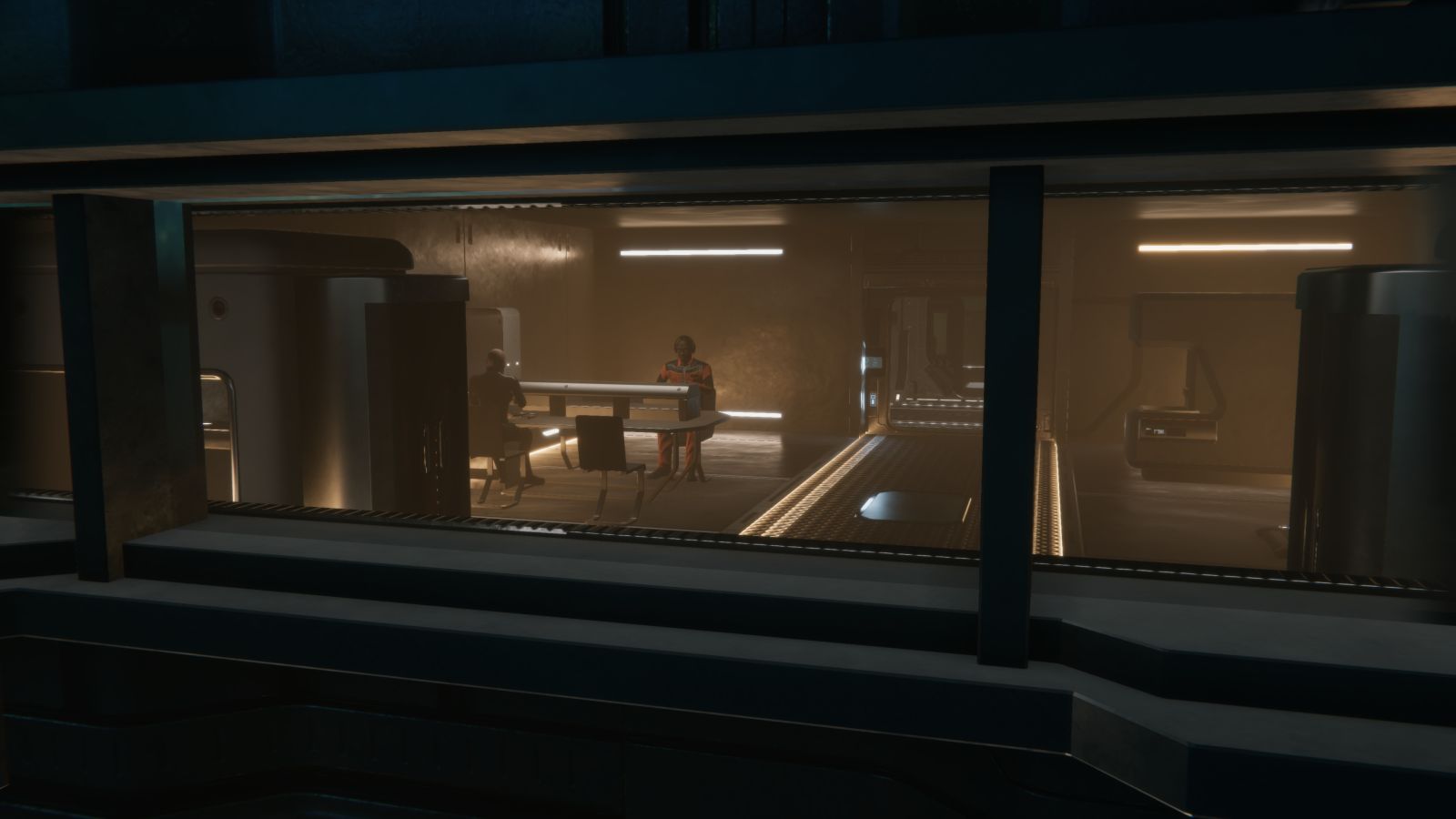 Headed back into the station, I focused on Maggie once again, building out four carbon drills, some storage, crew bunks, a small farm, and a medical station. These essentials should help us survive, despite the hardships. As I uncovered more scattered materials my crew found several items that reminded them of home. Pictures, a stuffed animal, and other goodies provided a reminder of what we are fighting for, as well as a perpetual buff for the recipient. It’s gonna be tough, but there’s a way to do more than survive here…

As this is early access, there are still some obtuse elements, and the game doesn’t do a lot to help dispel them. For example, if you find yourself unable to eat you’ll need to build a table. Once you’ve got that, if your crew STILL won’t eat…well, you are probably still in your EVA suit. Go take that off and your crew will actually sit down for a meal. Right now the game lacks the feedback to say “You can’t eat in your EVA suit”, leaving you to figure it out on your own. Discovery, so you’ll find, can also be an absolutely fatal process.

My first adventure came to an abrupt end. I sent Ryan and Jedd to pick up the materials that had filled the carbon extractors, not realizing that these drills were located on a platform exposed to the cold of space. They were both immediately incapacitated without oxygen. With nobody else to help drag them to safety, all I could do was watch them slowly suffocate and die. The UI is an element that improves rapidly in Early Access, but for now – look before you leap. 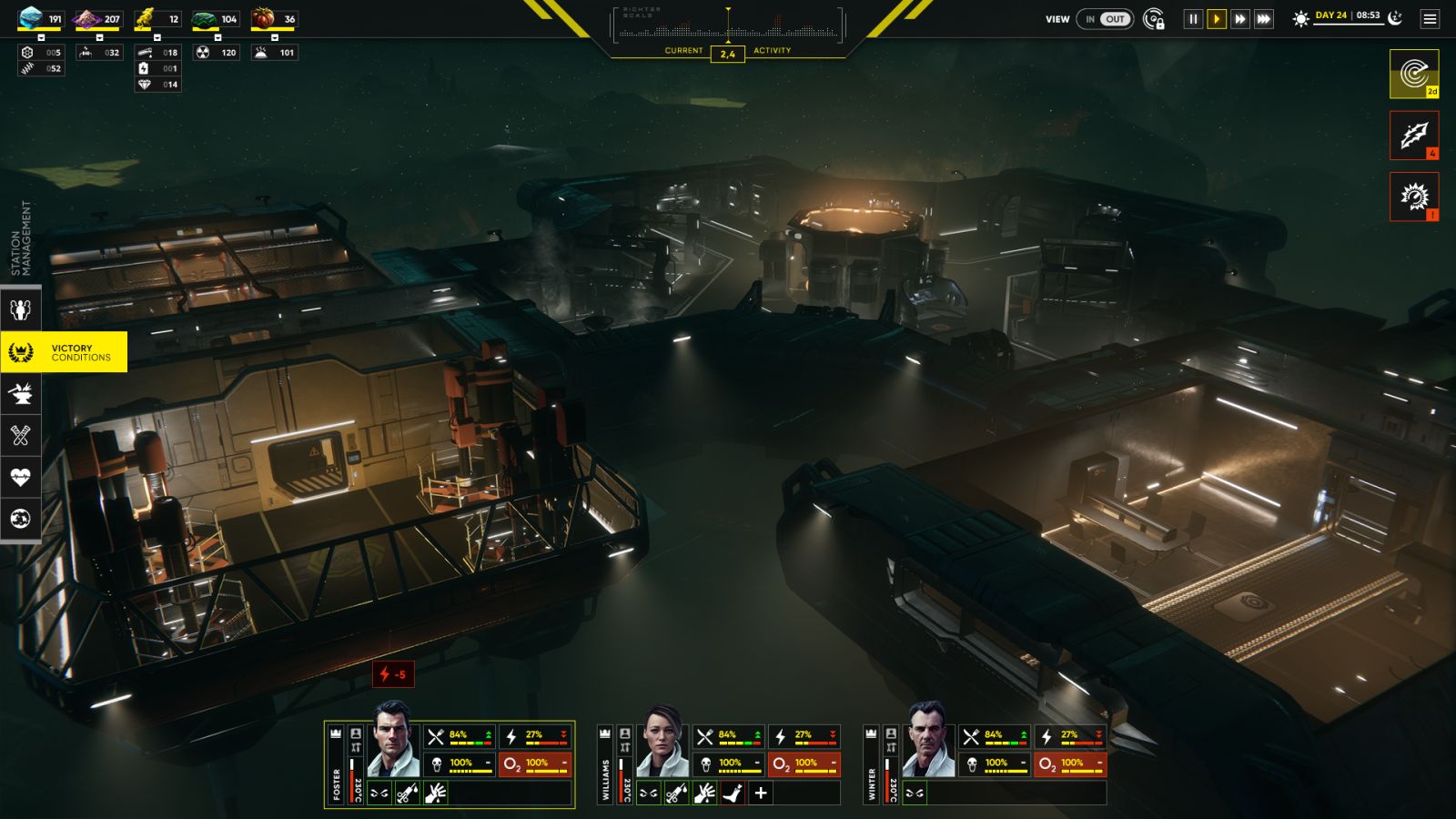 To help you survive out in the wild, there are a few items you can discover amidst the wreckage. For example, beacons will help you expand your radar visibility. Zip lines allow you to go up and down dangerous terrain. A hand drill allows you to mine materials you find in the field. There are plenty of dangers around every corner, so even a small toy you can play with to occupy your character’s mind during downtime is worth exploring to find.

All of these trials and tribulations, combined with the gear to overcome them, come together in service of a singular goal – repairing your ship. There are several parts to repair, and you’ll need to reload your supplies – especially food. The challenge will be to survive long enough to get your various economic engines running to produce electronics, fruit, minerals, and more in service of that goal. It’ll be interesting to see what other scenarios the team comes up with as the game progresses.

It’d be impossible to play The Pioneers: Surviving Desolation without immediately recognizing that it has another cousin in Early Access with games like Stranded: Alien Dawn. It has many of the same elements, but there are a handful of key differentiators for The Pioneers that make it unique and worth playing. The climbing and construction mechanics feel rewarding and there’s a huge element of risk/reward involved. There are no monsters roaming around (at least at this stage of Early Access), so you’ll be relying on hydroponics to survive. The climbing and jumping mechanic adds a verticality that the others don’t have. With the game being at the start of its Early Access journey, there’s plenty of room to grow. That said, The Pioneers: Surviving Desolation is off to a very promising start – even if my crew of actor knock-offs are as likely to starve as they are to suffocate. 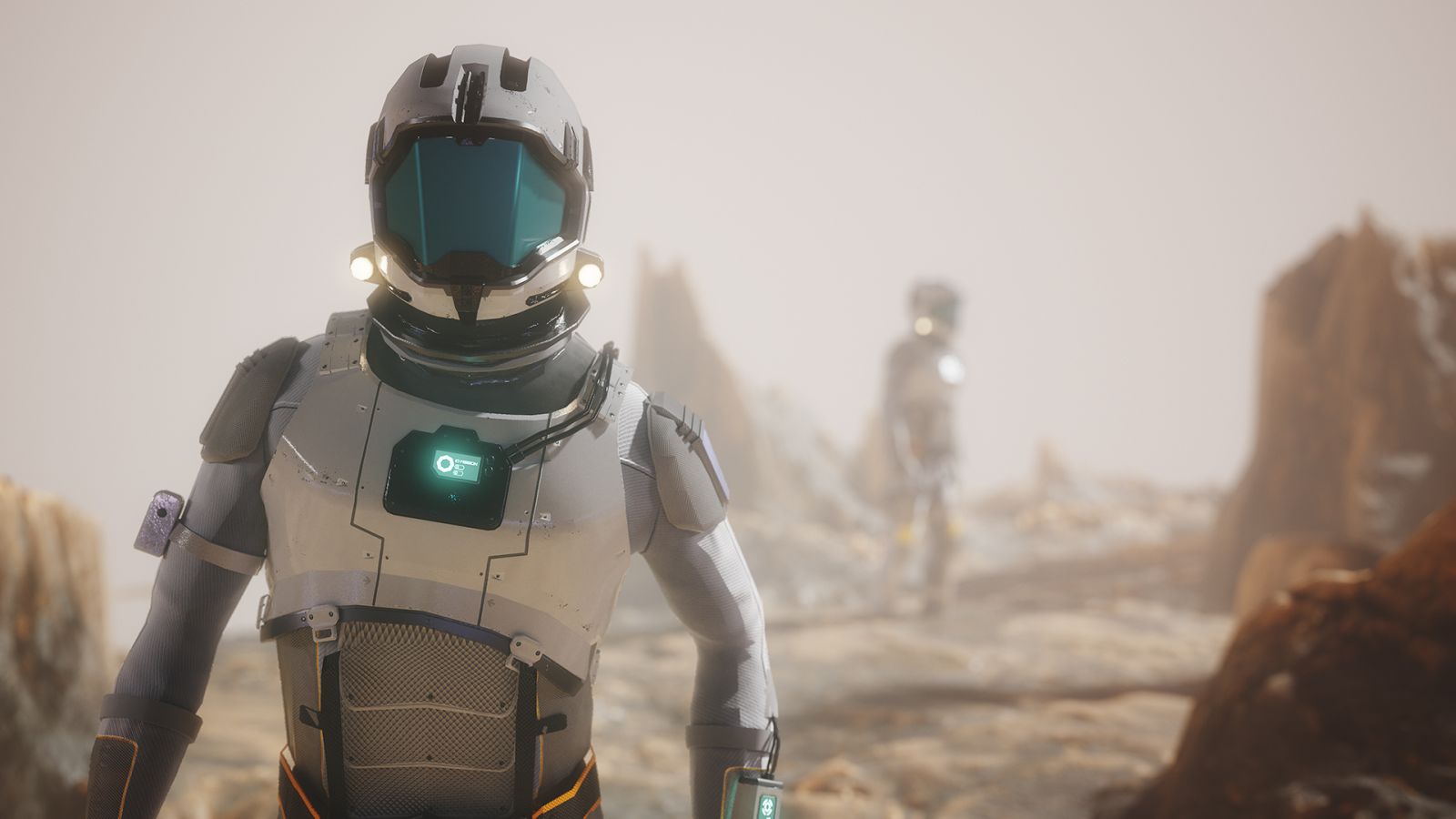 You can pick up The Pioneers: Surviving Desolation on Steam on January 20th, 2023.