It’s been years since a devastating event known as The Crash happened, where technology was essentially destroyed, leaving mankind in the dark ages. Humanity has done what it can to survive, but raiders, fanatics, beasts, and more have created even more chaos. A mysterious machine falls from the sky, crashes to the ground, and beckons you to it. It speaks of a mysterious crypt that holds preserved technology and shelter that could help you and your followers. With this information at hand, it’s up to you to lead your followers through the harsh world as you attempt to reach the crypt.

The game is an interesting combination of choice-based map exploration and card-based combat. The map traversal and its choices make me think of old games like The Oregon Trail, but obviously there’s much more going on here. On each playthrough, the layout of the map is randomly created, which offers a different experience every time. There are multiple paths stretching across the land, with some leading to dead ends and others to your next milestone (i.e. the end of that sector). When you’re ready to move, you choose a location adjacent to your current position and confirm that you want to travel. Traveling costs food and hope, which you can obtain from events, battle, and some locations. 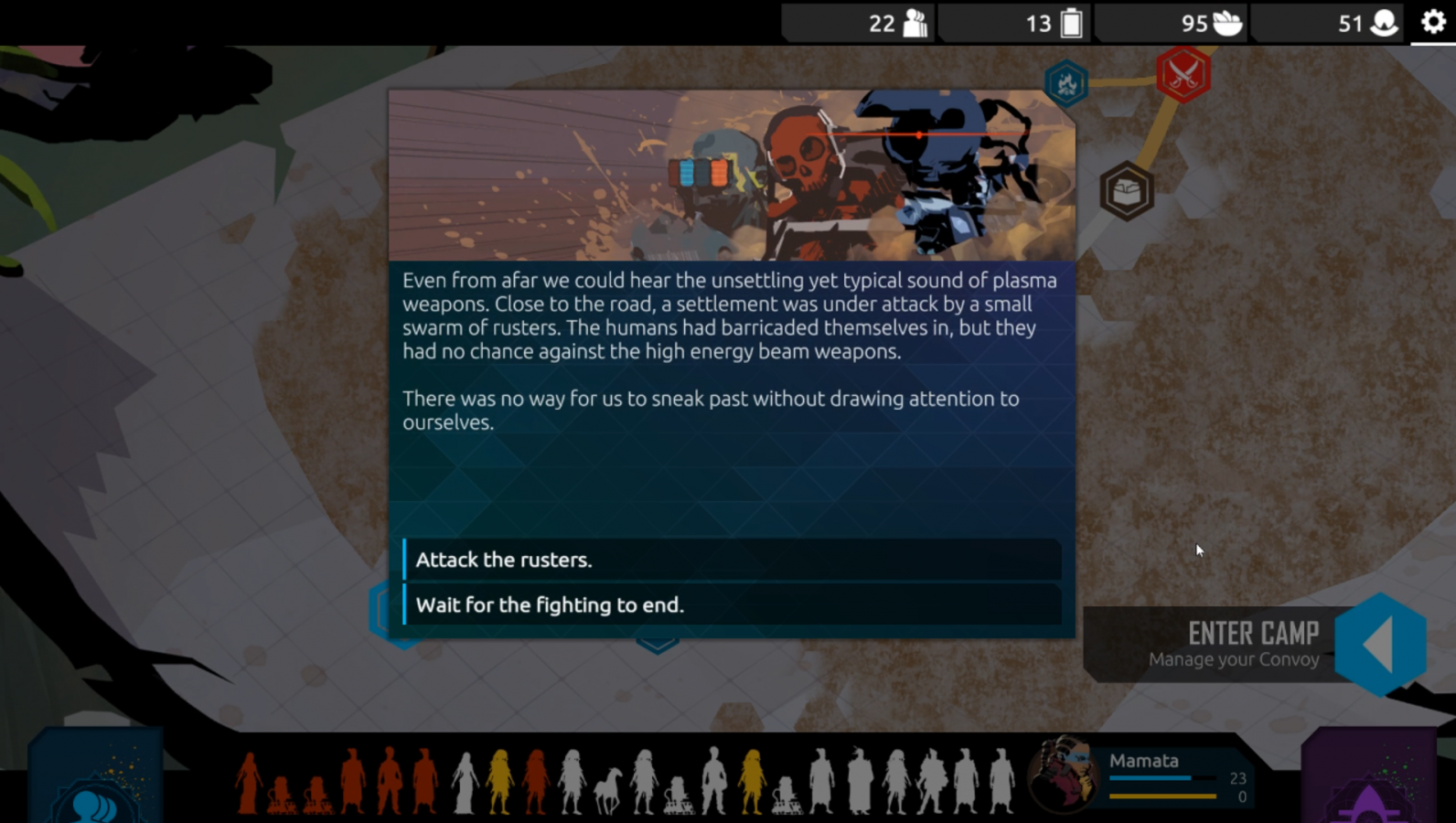 When traveling, sometimes events will trigger and offer you choices to make. For example, you might discover a group of bandits that you could either sneak by, threaten, or ambush. Other times there may be survivors that request help at the cost of some of your own resources. The choices you make will always have consequences, whether that be loss of resources, followers getting wounded, an unnecessary battle taking place, or if you’re lucky, just missing out on potential treasures. Depending on your current situation, one wrong choice could end your run. This means that choices are incredibly important and I felt nervous almost every time I made one.

As mentioned before, you’ll end up in fights as you travel. Besides the random events, there are some locations where battles are inevitable. These spaces are marked with a sword surrounded by red. Before the battle begins, you have the chance to edit your decks; these decks consist of your convoy cards and leader cards that assist them. Being able to edit them right before combat is helpful in case you forgot to add or remove certain cards since your last fight. Once any changes are done, it’s time to fight. 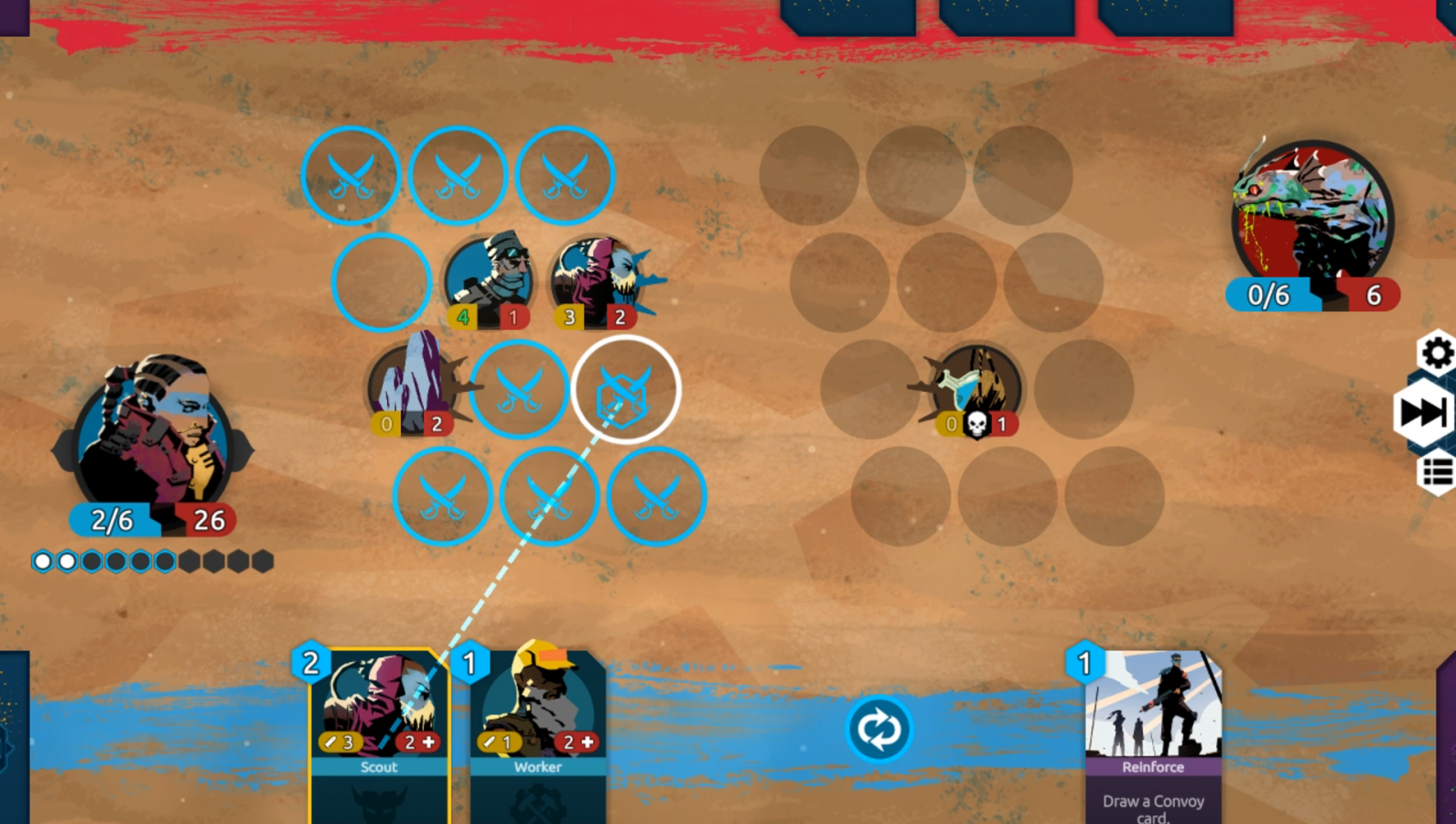 The battle starts with each leader drawing three convoy cards and three leader cards. Both combatants have an area made up of a 4 by 4 grid of token spaces. Sometimes these spaces are filled with obstacles or hazards, but they are generally meant for followers. You start the battle with three energy, which is used to play cards. Every turn increases your max energy by one. Each card has an energy cost in the corner, with more powerful cards costing more to use. Followers require energy to place on the board, but once there, they don’t cost any extra energy. Followers enter the battle exhausted, so they can’t attack on the turn they were placed unless they have the charge ability. Charge lets them rush into combat as soon as you want. Each follower has an attack power, health, and possibly a special ability. Some abilities give boosts to allies, while others may hinder or harm enemies. One of my favorites is a follower that once played, immediately destroys one enemy with the taunt ability.

In order to attack, a follower must be in one of the frontmost spaces of a row unless otherwise stated. If you have one follower on the frontline of row 2 with someone else behind him, then the person behind him cannot attack. You can move the second follower if you want, but that exhausts them, leaving them unable to attack that turn. To initiate an attack, you click on the follower and then their target. Only the frontmost enemies can be targeted. This means that whatever enemies are in the closest position in each row are the only ones you can target. An attacker’s power is the amount of damage they do, but there’s a catch: attacking an enemy causes them to retaliate. When a unit is attacked on either side, they will immediately damage their attacker equal to the amount of attack power they have. I’ve seen aspects like this used as counter chances in games before, but never as a core part of combat. This causes you to think more carefully about your moves because defeating one of your foes may end up costing you one of your followers as a result. I think this part of combat is brutal, but it does add an extra challenge that I find intriguing. 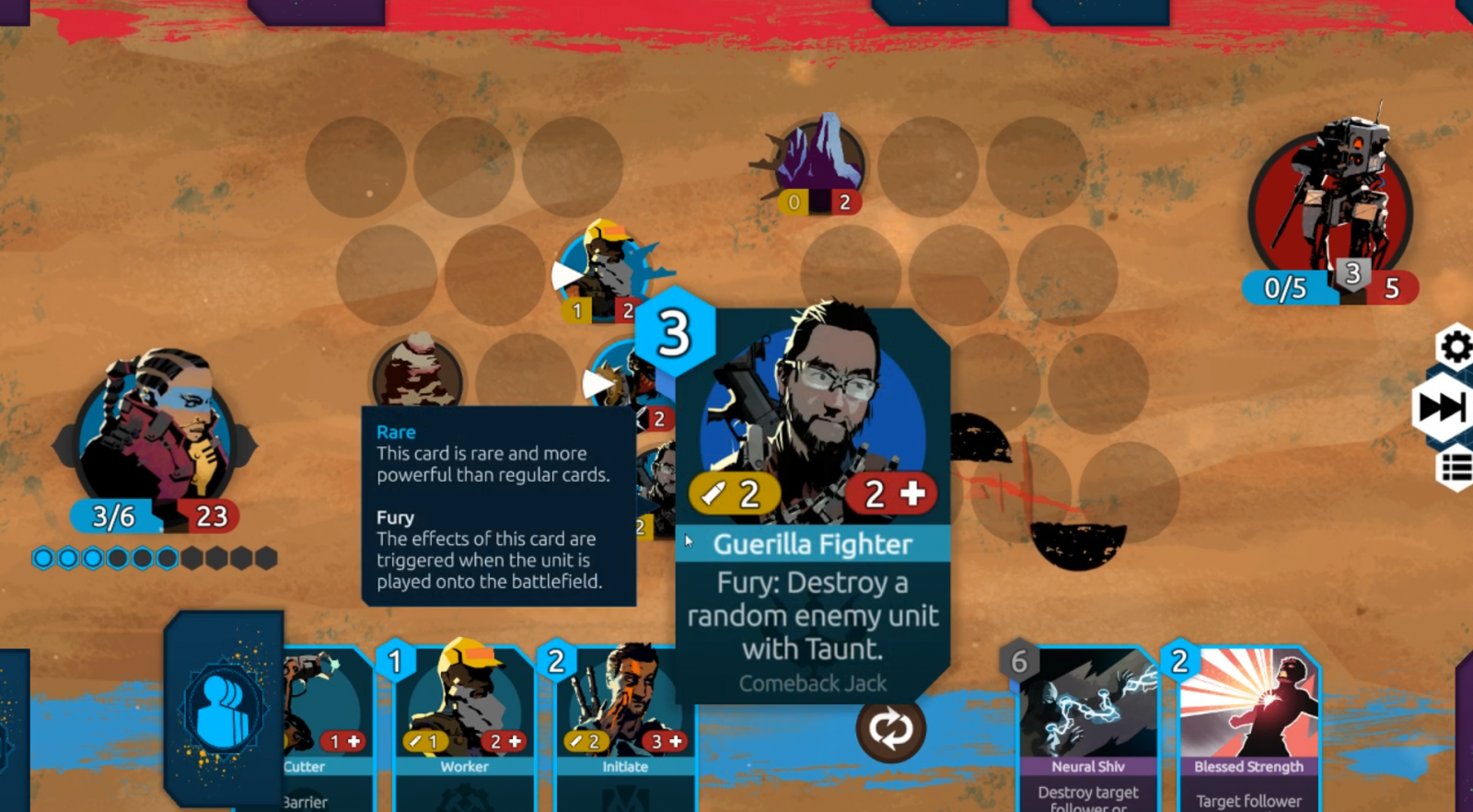 Leader cards have one time effects that activate instantly. These can be anything from boosting a unit’s stats until they die, doing damage to one or more enemy units directly, or even removing foes entirely. Leader cards can make a big difference, especially if you can use one to destroy an enemy without harming your own forces. Two of my favorites were one that increased a unit’s attack by four but reduced it’s health by two, and one that did four damage to all enemies in one column. Those two cards helped me in some pretty tough spots, and even earned me a few victories.

The goal of battles is to reduce the enemy leader’s health to zero. As mentioned before, you’ll be fighting their followers, but the battle won’t end unless the leader goes down. When attacking, you can choose to target the leader directly as well. This leads to you ending the battle sooner, but at the same time it may leave enemy units free to attack you on their turn. Depending on how the fight is going, you’ll need to decide how to best balance eliminating units and doing damage to their leader. 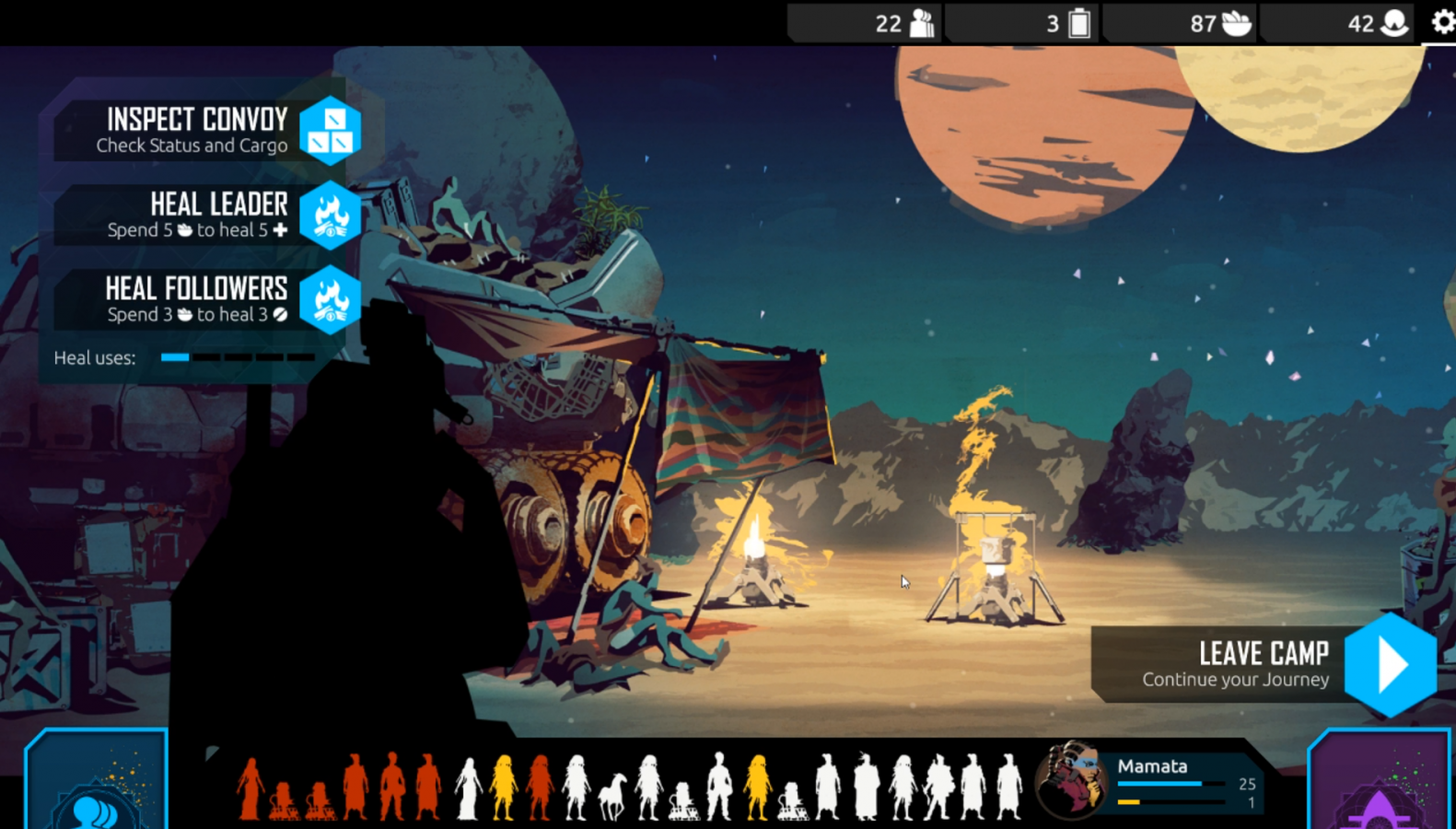 When in battle, some of your followers may get defeated. Don’t worry, they aren’t gone forever…yet. When a follower falls, you are severely wounded, which reduces their energy cost and stats until they get healed. You can heal a few followers at a time at safe campsites if you reach them, but you can’t always heal everyone. Wounded followers can stay in your deck and fight, but if they get defeated while wounded, then they die. My advice is keep them out of your deck until they’re healed unless you want to risk permanently reducing your deck size. You may recruit more followers due to events as well, so it’s not like you won’t ever have the chance to grow your forces.

The beta only gave us access to the first section of the game, but there will be more to explore in the full release. The choices have weight to them, while the combat is tactical, engaging, and definitely difficult. The whole apocalyptic wasteland vibe of the world is pretty cool, especially when coupled with the sometimes unforgiving gameplay. Nowhere Prophet is clearly no walk in the park and seems to be meant for those who want tougher games with a strategic focus. That being said, it looks like it’ll be quite an adventure to be had once it fully releases.