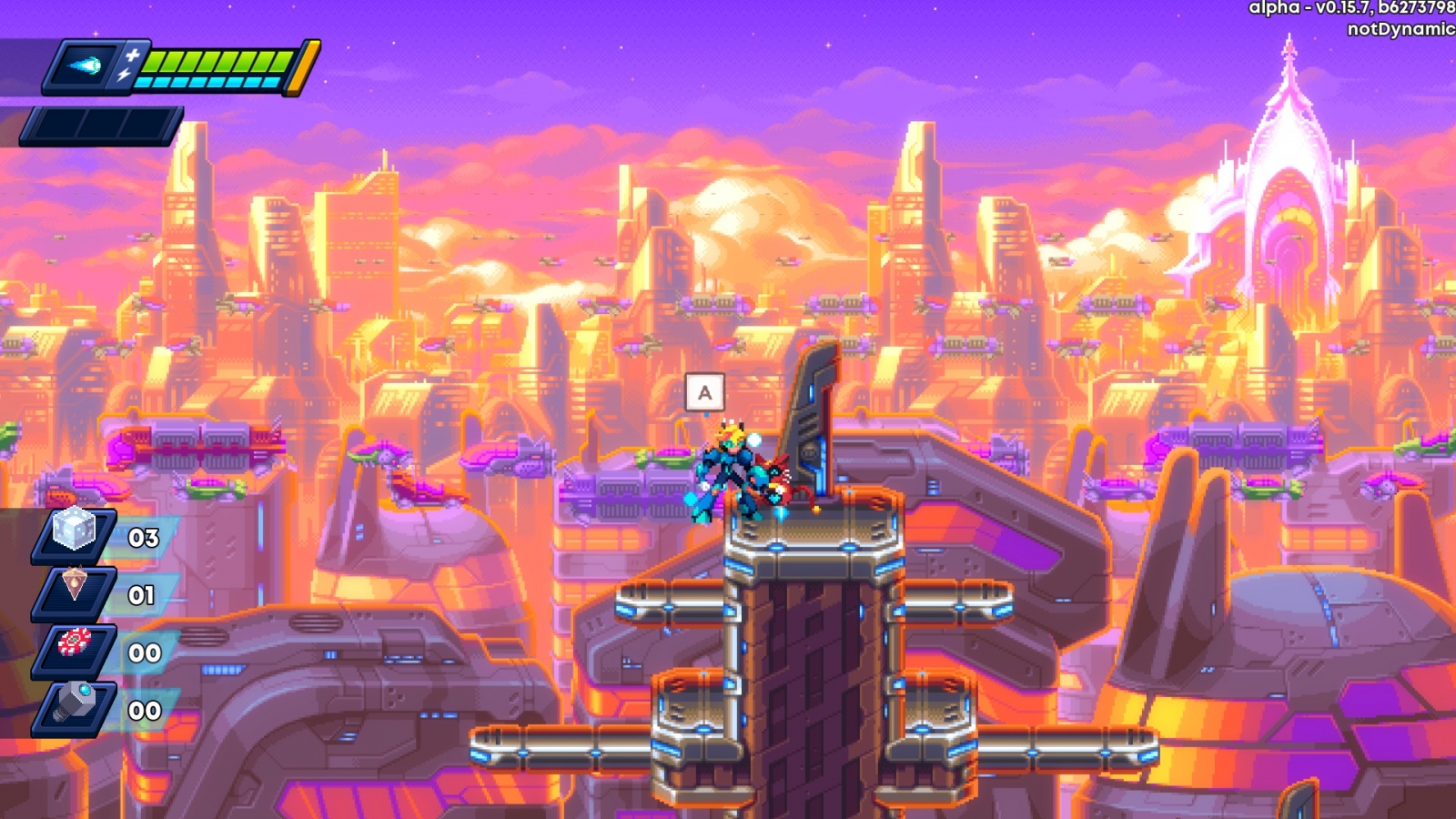 With most games in early access, it’s easy to see a game’s cracks and seams that haven’t been covered up yet or polished. Some mechanics might not work yet, levels can be unavailable or unfinished, and you might even see some placeholder graphics. I’m usually reluctant to play games in early access for this reason, however, 30XX is not that kind of early access game. Despite the small amount of content available, it feels polished and is a ton of fun.

30XX is the sequel to 20XX, a MegaMan inspired rogue-like with randomly generated levels. As Nina or Ace, you can jump, shoot, and slash your way through various stages gaining several types of power ups along the way. Nina starts out with just her buster gun, while Ace begins each run with his sword and a boomerang like projectile. Both characters can charge up their attacks for a damaging first hit or shot, dash, and wall kick on… walls. They’re essentially MegaMan X and Zero, though with some differences. First of all, the dash doesn’t really give you much speed or cover distance, you can instead use it just before jumping to gain momentum in the air and gain more distance. I found myself using this almost constantly in every run, because it’s both a faster way to get around and it’s just plain fun to use. The charge attack is also much more convenient, with an auto charge upgrade available to purchase with in game currency. While I prefer to play as Nina for her range and versatility, both characters are a joy to control.

At the moment 30XX is light on story for now aside from the initial tutorial stage, but there are still several interesting levels to jump and shoot your way through. Currently, the game has six of the planned eight level themes, each with several randomly generated chunks, minibosses, and a final boss. What sets 30XX apart from other rogue-likes are these aforementioned chunks: small, designed bits of levels the game loads in a random order. This approach has both pros and cons, on one hand this gives stages an actually manageable level of difficulty, and being handcrafted leaves them more fun as a result. On the other hand, once you play a few runs you’ll start to recognize the chunks which can be a bit repetitive, and hopefully the final game has more chunks for each theme, because in all my runs there were a few I seemed to encounter every time.

What I found most fun about the game though was actually the online co-op. As someone who normally doesn’t enjoy online multiplayer, this was a shocker. Both players are free to choose whoever they want, but a team of both Nina and Ace compliment each other perfectly, with each shoring up the other’s shortcomings. Since levels often contain multiple paths, you can either help each other through sections using the teleport function or take different routes entirely, possibly finding more resources like bolts or powerups. Sadly there’s not a whole lot of people playing online (get in my lobby dang it!), but when I eventually do find a match it’s always a good time.

Bolts are your basic currency that doesn’t carry over between runs, you use it to buy health pickups or even more powerups. There are two types of these powerups: active and passive. Active powerups you assign to a button for a new attack or move that uses up NRG, and you can also combine some of these to add special effects, like adding a gear to the powerful black hole shot that allows it to move slowly across the screen. There aren’t a whole lot of these yet, especially for Nina who only gains them after a level boss, but they’re still very fun to experiment with. Passive powerups are a lot more varied and can drastically change your playstyle. Some are simple attack buffs that are equipped for the rest of that run, but others cost cores to equip. You begin with a pool of eight cores which can be upgraded with other powerups, and each piece of gear can draw a certain amount of these cores. For example you can equip an air dash ability for six cores or turn Nina’s standard blast into a shotgun for three. Some of these can be extremely powerful, and thus cost even more cores, so you have to decide what you want to equip from what you have. You will also find you need to use different abilities and powerups for different situations, and you can easily swap them out in the pause menu. It’s a nicely balanced system, though I wish items that increased core capacity were a bit more common as I only saw one throughout all my playthroughs.

I can’t get enough of 30XX and I await more content with baited breath. If that early access tag initially put you off, rest assured that what’s already here is well worth the entry fee aside from a few rare glitches and crashes. I’m looking forward to revisiting this in the future when the game is finished, but for now my mind races with thoughts of what is coming next both in terms of this game and what the developer will do in the future like, if I may be a little self indulgent, a MegaMan Legends style rogue-like.