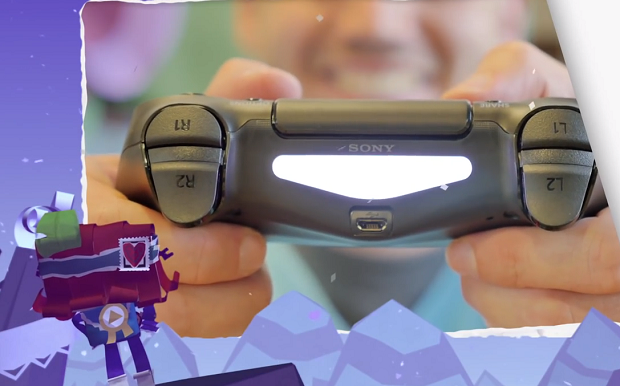 When the game originally came out on Vita, I played it out of curiosity and so I could have something on my criminally underused handheld, but after hours of play, I found it to be an incredible use of the Vita’s functionality that was full of charm and, most memorably, I loved how it approaches the idea of storytelling.

In playing Tearaway: Unfolded, the game’s retooling for the PlayStation 4, I’m reminded of everything I enjoyed about the original game, but was also able to experience that same story in a completely different way.

A lot of Tearaway’s mechanical staples are still present in Unfolded. The game is built around your helping your in-game messenger, Atoi, navigate through environments by altering it using the DualShock 4’s touchpad and improved SixAxis motion controls.

The one feature that was most heavily featured in the demo I played was the ability for Atoi to throw objects in the environment into your controller. You then have to shoot whatever item is in the controller at certain targets, using the SixAxis gyroscope in the controller to aim as opposed using an analog stick, often in order to reveal new passageways for your in-game character to use in order to progress. It really blended in with all of Tearaway’s other environment-changing mechanics, and felt like a natural addition to all the ways you can help your messenger along.

Also taking advantage of the motion controls is the ability to use the controller’s lightbar to illuminate dark rooms, and control enemies caught in the light. The demo showcased how players could move the controller to make enemies stand over pitfall traps in order to guide them to their demise. This is in line with what the original game did regarding defeating enemies, as Tearaway wasn’t a combat oriented game when it first came out, often requiring you and your messenger to work together in order to disable and take out enemies, as neither were usually capable of doing so on their own.

The DualShock 4 feels just as crucial to Tearaway: Unfolded as the Vita felt to the original game.

Some of the mechanics that were present in the original game have been remapped in order to accommodate for the lack of a back touchpad on the DualShock 4, meaning that things like pushing up bouncing platforms have been relocated to the DualShock 4’s touchpad. It was a bit disorienting at first, and it makes me curious as to how else certain aspects of the game have been changed in order to make it feasible for a console release.

Tearaway was a game that was made with a certain idea in place: take advantage of everything the Vita is capable of and make it feel genuine. Unfolded seems to be taking that same philosophy and applying it ot the DualShock 4 just as earnestly.

Playing Tearaway: Unfolded was like seeing an old friend I’d not spoken to in awhile, and one I’m ready to reconnect with. I can’t wait to see how Media Molecule has utilized the PlayStation 4 to rework one of my favorite games for the Vita, because I feel it’s about time I met up with my messenger again.