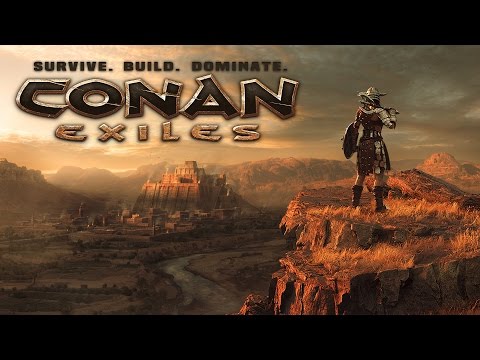 I’m naked again.  I’d made it a good distance away from the crucifix where the game begins, but exertion combined with exhaustion took its toll.  Frantically scrounging for grass reeds just to make some clothes to shield myself from the burning sun, I found out very quickly that Conan Exiles is every bit about combat as it is about survival.

Conan Exiles is based on the cumulative works of more than a dozen authors (including Wheel of Time author, Robert Jordan) spanning 50 novels, starting with those of Conan creator Robert E. Howard in 1953.  That said, you don’t need to have a working knowledge of any of these books, or the multitude of comics or three movie tie-ins, to understand this world.

Set in what seems to be the early Hyborian Age, Conan Exiles is a tale of exploration, expansion, and savage conquest.  Developer Funcom (also the team behind the MMO Age of Conan: Hyborian Adventures) has taken an entirely different approach with Exiles.   The game has just recently moved into early access, and I’ve spent a few hours discovering the world.

First and foremost, Conan Exiles is not an MMO…unless you want it to be.  You can play it single player,  in a custom server where you can invite up to 100 of your friends, or you can jump on random servers and deal with their rules.  Running the server, you can adjust a great many variables such as how fast the player is affected by stamina, thirst, and hunger, day and night cycles, creature and item respawn rate, and far more.  The current build has an admin panel exposed to spawn creatures, items, and objects, but I spent the first few deaths understanding the world before I went about breaking it.

The world of Conan Exiles is brutal and unforgiving.  Everything wants to kill you, eat you, and take your things.  The default settings are to allow all of your gear to drop (respawning you naked at your last bedroll, or at your crucifix if you didn’t even make it that far) for any other player to loot.  With that in mind, the overarching objective is just to survive.  But for those strong enough to call themselves Hyborian, you cannot be content to simply survive — you must rule.

Crafting is a big part of any action RPG, and the fledgling parts of a robust crafting system are present in Conan Exiles.  While it suffers from some UI clunkiness (the whole game interface is very basic at present), there is a simple logic in Exiles to its crafting engine.  Starting off naked, you’ll need clothing.  Gathering up reeds allows you to weave them into basic strips which can be turned into shoes, loincloths, a basic tunic, handwraps, and leggings.  Anything beyond those clothing basics requires leather, and we all know how to come by that.  A stick and a rock with strips of reeds become a stone axe.  That axe can be used to fell trees which yield planks of wood.  Planks of wood can be turned into a crude shield.  It isn’t often difficult to extrapolate what the game wants of you, and if you get lost, there are indicators of what materials are needed.

Conan believes the best things in life are “To crush your enemies, see them driven before you, and to hear the lamentation of their women.” Of course, he said this while locked in a cage as a thrall.  You see, slavery is a major component of the world of Conan.  Whole villages are raided and enslaved, dragged back to Wheels of Pain and forced to ceaselessly push a slave wheel around and around until they drop.  The strong who survive are found worthy of further investment, receiving training as warriors, craftsman, guards, and bed slaves.

The Wheel of Pain — a rough way to spend the day, month, years…

Conan Exiles, once you’ve gathered the materials to make the needed Wheel of Pain (and reached level 10), supports the creation of thralls. Striking an unsuspecting human of any type with a truncheon allows you to render them unconscious.  By crafting reeds into twine, you can fashion a rope to then drag their limp and unconscious body back to your camp.  Feeding your thralls and breaking them on your wheel allows you to make them into armorers, carpenters, guards, and more.  As the game evolves, I would imagine capturing already-trained crafters from enemy factions would yield even more effective results.

Combat is still early with Conan Exiles. You can fashion a bow, a sword and shield, a hammer, starting with stone and advancing eventually to metal weapons, but all of the combat currently consists of enemies running towards you at full speed and standing right in front of you as they punch or bite at you.  Future patches will bring sorcery and more advanced tactics — the developer have already recognized this and promise additional polish and features in upcoming patches.

Utilizing Unreal Engine 4, Funcom has made Conan Exiles a fairly pretty game.  There are some rough edges here and there, but for the most part the game holds up, even in this early state.  The developers have stated that they don’t expect to spend “more than a year” in Early Access (looking at you ARK), which suggests frequent patches full of features, upgrades, optimization, and more.

I was surprised at just how feature complete the game already is.  There is a lot of of work to be done, and elements like the UI and performance hiccups scream Early Access, but Funcom has done a great job of proving their basic premise.  Conan Exiles is shaping up to be the most brutal, mature, and true to the book adaptations version of the Hyborian universe yet.

Conan Exiles is available via Steam’s Early Access Program, but is coming to Xbox One with PS4 being a persistent post-release rumor.  Stay tuned for our continued coverage.