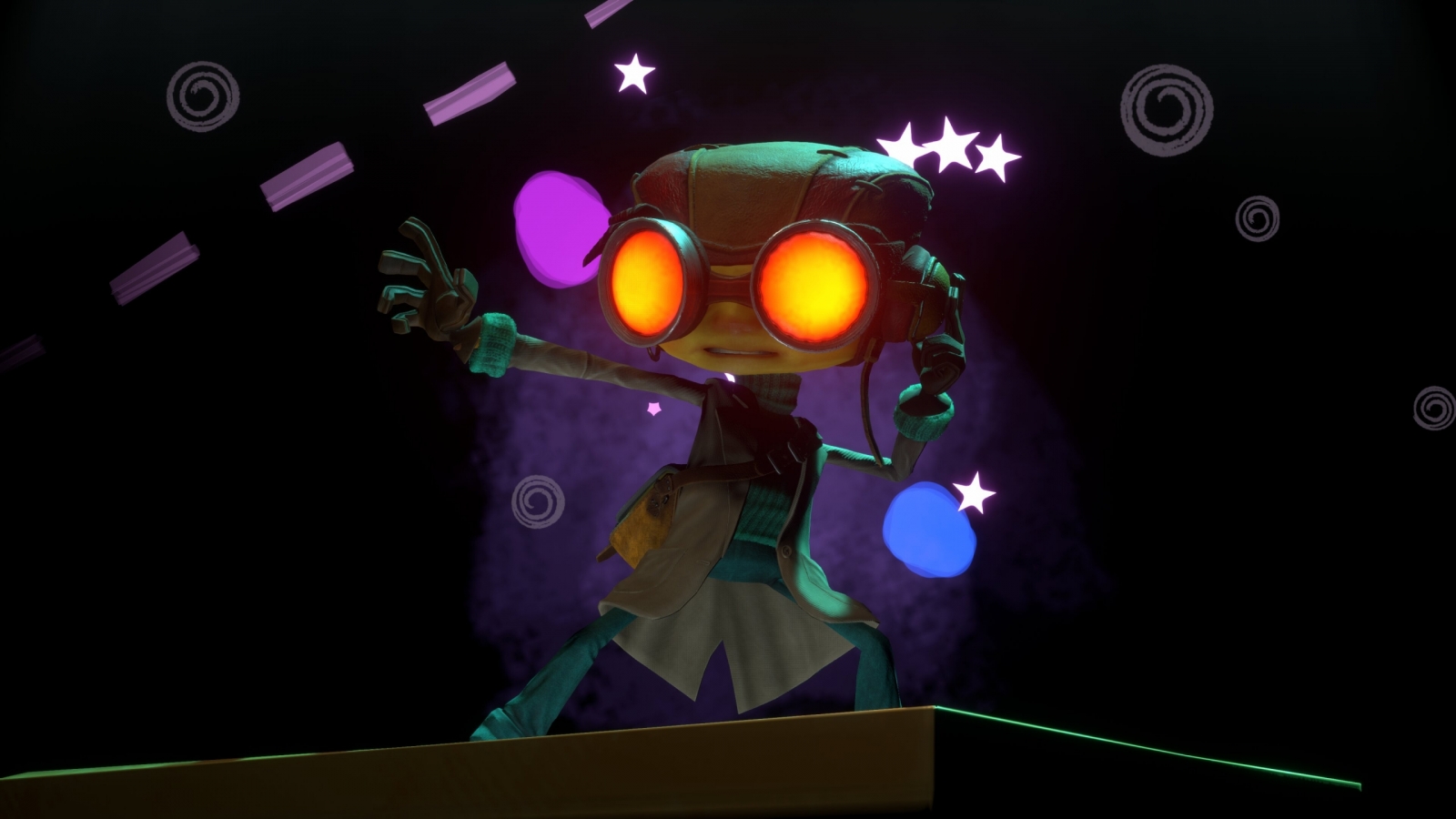 Many games fall into development hell, but few are able to ascend from its boiling depths. Even fewer manage to be a competent product, with the likes of Duke Nukem Forever changing hands so many times we weren’t even sure who polished that turd. Some go on to make it, as Kingdom Hearts III finally saw the light of day even though it wasn’t a perfect experience (our review here), but most tend to be sequestered to adages of what could have been. I’m not sure Psychonauts 2 falls into the category of being in development hell, but it certainly has been a long time coming to this grand revisit.

I’ve been super excited for this game to finally release ever since completing the original way back when. I wasn’t a day one player mind you, but I certainly fell in love with Raz and company as they went on their zany adventure back in 2005. It’s been nearly six years since the initial announcement of the sequel, and between that all kinds of different things have happened, including Fig (think Kickstarter) funding, the VR tie-in Rhombus of Ruin, and a Microsoft acquisition of Double Fine. It’s been something to finally have Psychonauts 2 in my hands, and it feels like a figment of my imagination blending with the production values of today.

So, let’s start with this statement: you’re going to be hard pressed to tell me Xbox Game Studios has released anything more unique than Psychonauts 2. It’s not that they don’t have an incredibly diverse group, and it also doesn’t take away from the efforts to branch out through Game Pass (Spiritfarer comes to mind), but it’s more due to the talented group at Double Fine that has always made games that exist outside the box. These are the same people that made Costume Quest AND Brutal Legend, and that is an amazing thing.

There’s plenty to love about the game, but something I love right from the beginning is the effort to be inclusive to all gamers. This is present not only in just the settings, but in the opening scene as well. Psychonauts 2 opens up with a nice little recap, which in my opinion is necessary given how long it could have been since the last time someone has played it, along with Rhombus of Ruin being a VR title that many haven’t experienced. It wraps everything up in a nice little package, and you’re ready to rock within minutes. As for the settings, the push to help different people with different challenges to play video games has been industrywide, but I can see several things becoming standard from Psychonauts 2. No matter where you stand on the “issue”, the invincibility option makes it so that no matter what obstacle you face, you’re going to be able to play this game at your own pace. There are others here as well, like colorblind filters and the like, but the invincibility toggle stands out to me. Everyone deserves to play video games. 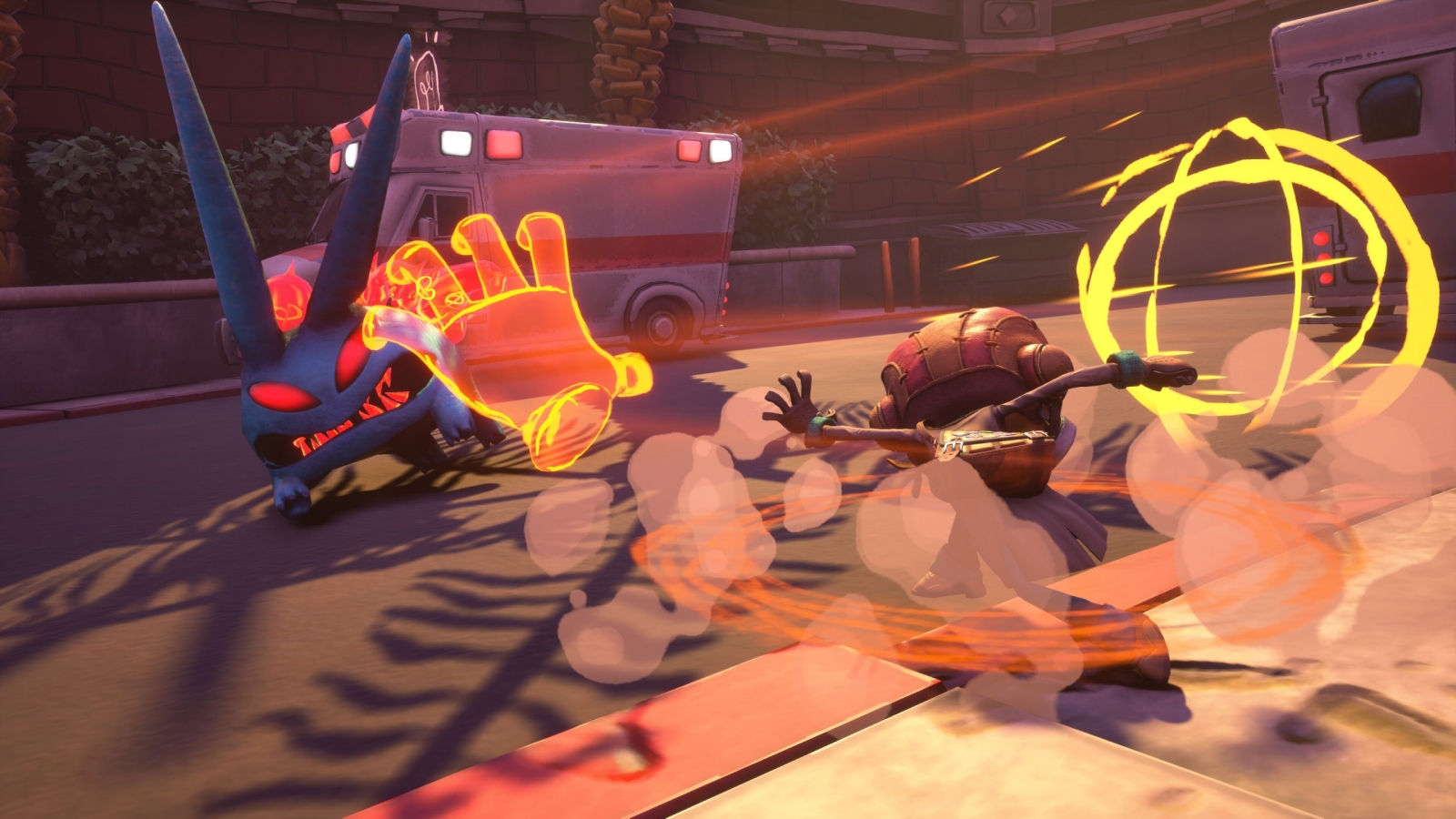 So, if you’ve played the original Psychonauts before, this is going to feel wonderfully familiar to you. Within the first level alone I found so many things pulled right from 2005, the emotional baggage, the figments, the memory vaults, all creating happy nostalgia. Heck, even the scavenger hunt you’re given in the original by Ford Cruller returns by way of another student. There is plenty to do in the game right from the start, and I’m sure there’s plenty to come once you move further in.

Moving further in is obviously going to happen through the levels, and boy, has Psychonauts 2 upped the ante with what they’ve built. Each of the levels I was able to play were alive, and they all felt unique. The opening level, despite it’s disgusting teeth and gums theme, is an intriguing romp through the mind of Dr Loboto, the baddie from Rhombus of Ruin and secondary villain of the original. Let’s be clear, even if you don’t have a phobia about the features of the human mouth, there are plenty of spots you will most likely find repugnant (and if you do have any phobia I’d stay away), but the artistry in motion of each one of these areas is a sight to behold.

It especially comes into light when you find yourself inside the mind of the Second Head of the Psychonauts, Hollis Forsythe. While the first time you enter it’s cold and damp, the second trip you make takes on a bright casino theme, which is only there because of a mistake Raz makes. Rest assured, he’s there to fix it, but the cornucopia of color is a blast to explore. It’s hard to explain exactly how delightful these areas look, but if you’ve seen a trailer for the game every flamboyant environment is an accurate representation of what you’re going to see. 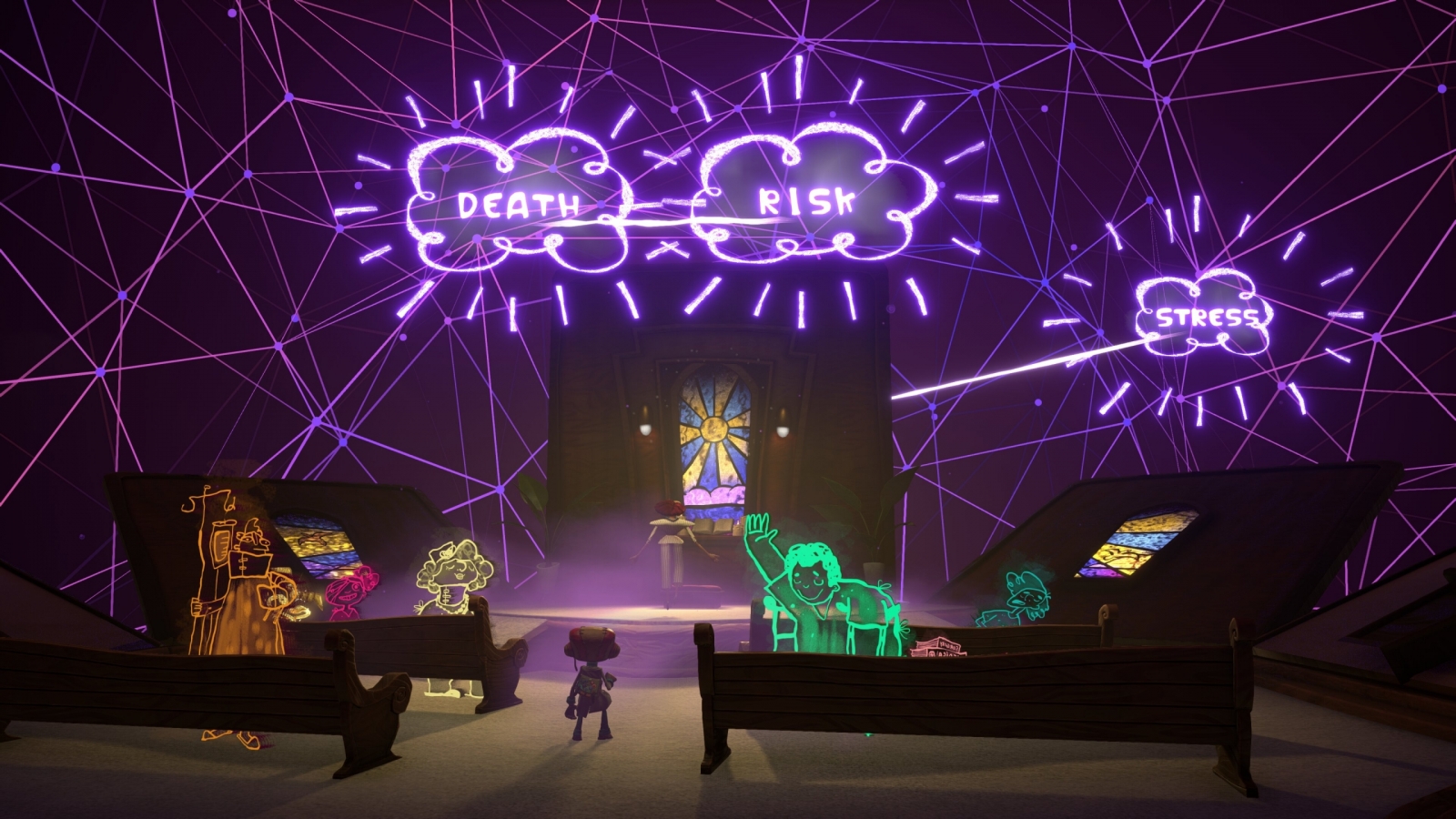 During said exploration, I found the mechanics of the game largely unchanged from the first, but not necessarily in a bad way. There aren’t nearly enough great platformers out there, and this reminds me of one of my favorite games this year, It Takes Two, in that there’s just enough beating up bad guys in between moving through the level. Getting through each section flows wonderfully, and my muscle memory from platformers past made me feel right at home on every level. This makes its way into the combat as well, and while there isn’t a ton of it compared to the platforming, shooting psi-blasts and telekinetically flinging objects is plenty of fun. It all works in a crisp, fluid manner, and makes me feel like I’m back in 2005 playing the original. You can’t ask for much more than that.

One of the areas I think Psychonauts 2 is going to have its biggest impact is in the story. Right off the bat, there’s a mental health advisory on how the game depicts serious mental conditions and how you should be careful if it affects you. This is realized quite quickly in the opening level with Dr. Loboto as we see he’s just a pawn with mental blocks inside his mind used to intimidate him into silence when questioned about his employer. Double Fine goes even further down this avenue as you traverse the mind of the aforementioned Hollis Forsythe, and the battles she’s fought to become who she is are done with aplomb. Given this is only the first few hours of the game, I can’t wait to see what the developers have laid out next. We did talk about the aspects of their use of mental health and what they’ve done in our interview above, and I hope it will add more to what you’re reading here. 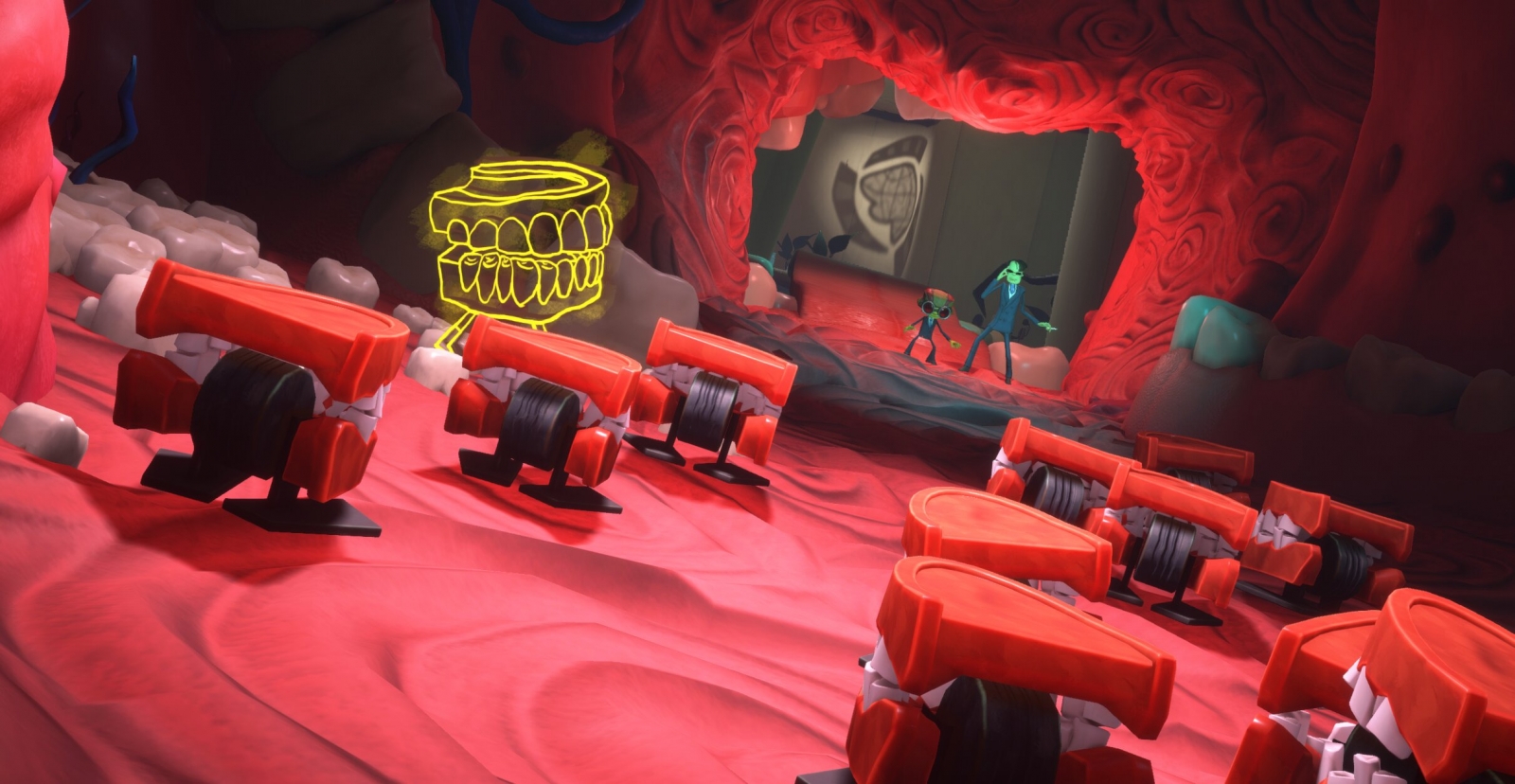 The biggest question with playing this game was always going to be if it fits in an age much different than the one it arrived in. I mean, all you have to do is watch or play some of the first Psychonauts to see how much has changed in gaming since 2005. Not everything will translate, but I feel like Psychonauts 2 has its place among the more refined games of today. The gameplay is clean, feeling as good as something like Crash 4, and the color palette chosen sets it apart from everything else. There are some things that feel a bit off, like the character models, but I feel like that’s more in the style of the game rather than something being unoptimized. This is a faithful return for the series, both in staying true to its roots and also taking advantage of the power of present day consoles, and it’s great to see a game once thought dead rise again.