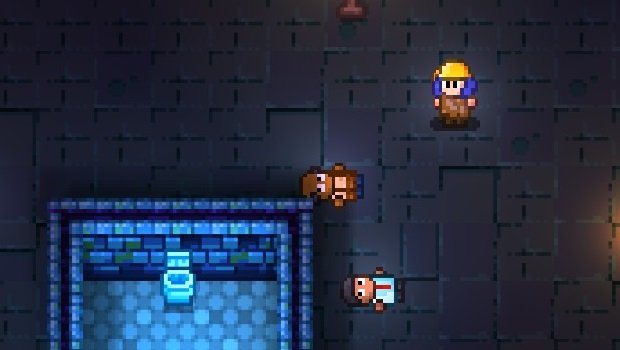 Roguelikes are becoming increasingly popular, especially in the world of indie gaming. Streets of Rogue, a game in early access on Steam developed by Matt Dabrowski and published by tinyBuild takes on this genre in a unique way. (Think if classic Grand Theft Auto and Metal Gear had a child, but it left the family to join the circus.) Each floor offers a variety of randomly selected missions, procedurally generated maps and high possibility for carnage and mayhem.

After a simple-but-crudely-hilarious tutorial, you’re brought to your hub world: a secret underground hideout for resistance members that are up against an evil tyrannical mayor at the top of the city. From here you can choose to spend hard-earned chicken nuggets on level-up perks and weapons to take into the game. You can also choose to play through multiplayer and change the game modifiers (more on that later).

Despite its early access status, there are a lot of characters available to play as from the start with more to unlock as you play through the game. The cast spans through a wide variety ranging from slum dwellers, soldiers, thieves all the way to gang members, cops and even a gorilla. Each character offers a different load-out and set of skills. For example, if you choose to be a thief, you can get into safes more easily and pickpocket citizens, but shop owners will often ask you to leave their store. Rude.

When you choose your character, you should think about the kind of missions you could be tasked with. Some of the missions will have you retrieve an item (from a safe or a person), neutralize a person, break someone out of prison, destroy a generator, and escort someone to the entrance of the level. Just like the map, these missions are randomized.

There is more than one way to approach missions. For retrieving items, the mission may go more smoothly if you have the thief as a character who can easily pickpocket your targets. If successful, you can retrieve the item and escaped unnoticed and without using any of your precious items. Unfortunately, this is one of the only instances where a more passive class outshines an aggressive class.

When my friend and I played together, we eventually found our favorite duo to stick with. I played as the soldier, a character loaded with a machine gun, grenades and landmines, while he chose the thief. This was a good combination to have, but it was more difficult for him to complete the missions. Why sneak into a heavily guarded facility when you can just blow up the wall to destroy the generator or break into the chest?

This is especially problematic when you realize that the thief has a finite number of items he can use to break into places that are too difficult to replenish, therefore rewarding aggressive players much more than passive ones.

The full game will have 6 levels of the city, but for now, only 2 are available with three floors each. Unfortunately, you can blow through these levels quickly, but that’s why we have level modifiers to create a unique experience on top of the randomized content. Completing certain conditions will unlock more modifiers. Some of the modifiers make the game faster, limit you to using guns or melee weapons exclusively, or make it so that everyone hates you and just like real life, when someone hates you, they beat you up. My personal favorite is the “guns only” modifier, but that’s because of the hilarious (and dangerous) situation that arose from choosing it.

For the final floor of each level, a “disaster” happens. These disasters are difficult challenges that occur to make running through the last floor of the level a living nightmare. Because learning about the disasters is half the fun of a run, I’ll only talk about one: Riot!

This was my first disaster and it’s one that isn’t necessarily too dangerous for you if you’re careful. In this disaster, the citizens of the city are pissed. Everyone is fighting everyone else. If you’re careful, you can watch the carnage from a distance and pick up the items that are dropped from victims of the riot. Things “heat” up if you have on a modifier. While my friend and I were running through with “guns only” on, we got the “Riot!” disaster. The only thing worse than an angry mob killing each other is an angry mob killing each other with guns. We barely survived that floor, but it was exciting.

Streets of Rogue is full of small touches that bring the world to life. If someone hates your guts and they are pursuing you, they may accidentally hit someone else. If that happens, the person they hit will fight them and you’ll be free. Another small touch I noticed is two gang members fighting each other. This game has two gangs, the Blahds and the Crepes (a clever twist on real-life gangs, “Bloods” and “Crips”) and if you witness the two gangs in the same area, they will fight.

Overall, Streets of Rogue is shaping up to be a fun game with a lot of care put into it. While it’s far from completion, I’ll be looking forward to seeing what sort of mess I can get into at higher levels of the city. At the moment, it has some balancing issues it needs to fix, such as rewarding players for running in headfirst more than moving in more calm and with a plan, but you can even have a good time if you fail, and that’s one of the most successful marks of a roguelike. If you can die and not feel like you wasted your time, you’ve succeeded. Streets of Rogue is available on Steam’s Early Access system for $15.