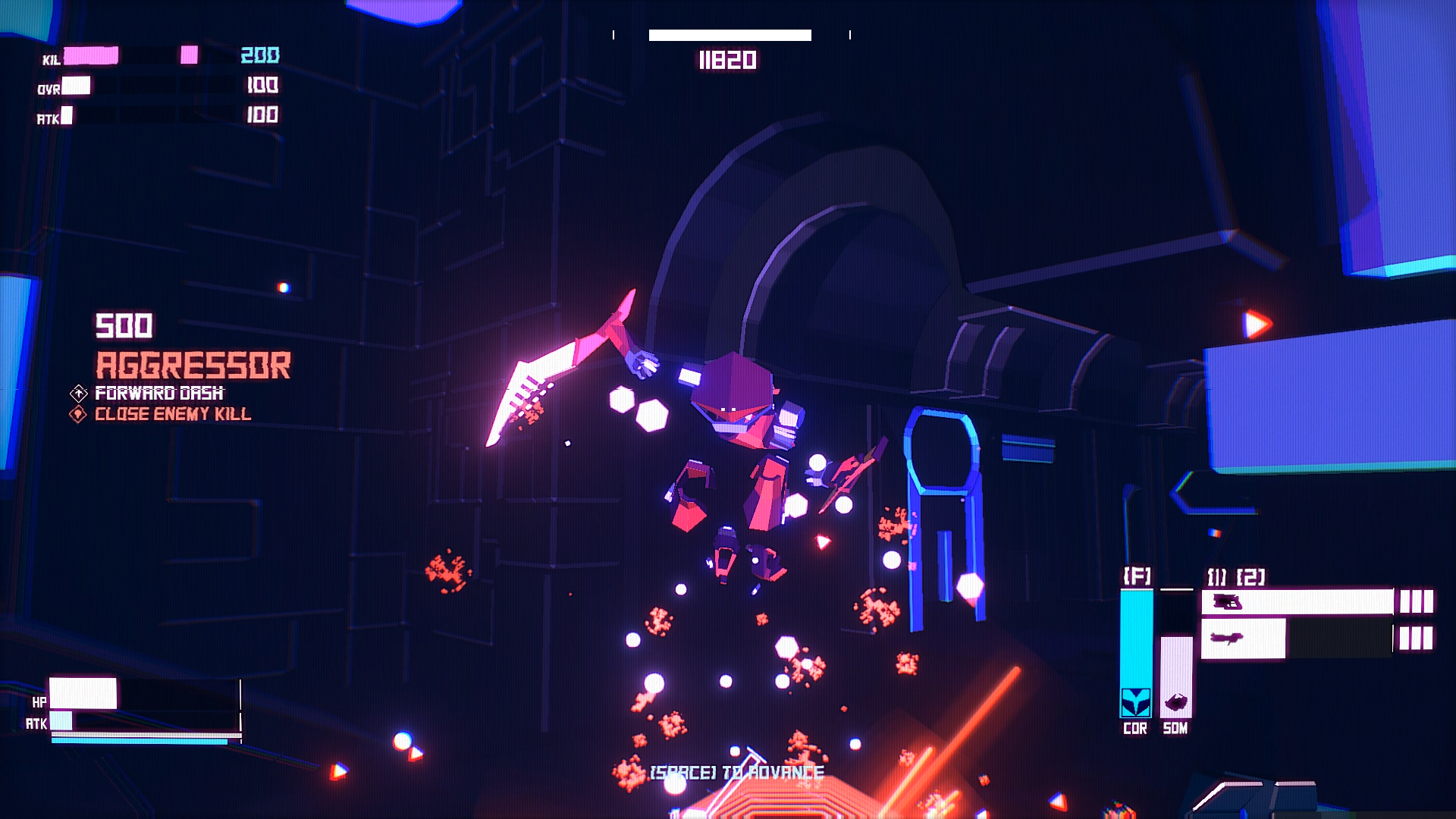 This represents the progression of my thoughts and reactions to Desync:

The first minute in-game as an unapologetically avid ‘80s synth fan (much to my wife’s displeasure): “Damn, this soundtrack is amazing!”

After another hour, and just prior to launching my keyboard through my neighbor’s bedroom window: “@#$& this!”

About an hour after my neighbor cussed me out for shattering his window mid-coitus: “I should play Desync again.”

Rinse and repeat until cross-eyed.

Although I may not have actually interrupted my neighbor’s nookie with a flying keyboard, the rest is pretty much spot on. I instantly fell in love with Desync’s ’80s synth soundtrack and its tough, but addictive shooting gameplay.

Desync doesn’t try to be something it’s not. There’s no plot, no gripping story—and that’s totally fine. Not all games need a narrative. If the mechanics are enjoyable and engaging, they can stand on their own successfully, and Desync accomplishes this perfectly.

This ultra-challenging arena-style shooter demands all of your attention. With pacing akin to that of a twitch shooter, damage boosting kill combos, a deadly environment ala Bulletstorm, and an almost “puzzly” nature like that of Superhot, you’ve got to be laser-focused to stand a chance. This is one of the hardest shooters I’ve ever played. Seriously.

Each level of Desync is divided into a handful of arenas which must be completed in succession. Die at the beginning of an arena and you’ll have to respawn at its start until you’ve beaten it. As you play through each level, you’ll unlock more guns, gain new abilities, and fight different enemies. Some enemies have ranged attacks, others melee, some combine both, and some even teleport, but they’re all very aggressive. To stand any chance of defeating them, you’ll have to move swiftly, dodging projectiles, evading strikes, stringing together wild combos, and using the wall mounted spikes or pendulum axes to your advantage.

However, as I’ve stated before, I’m not a fan of extreme challenges when they become a major roadblock to experiencing all the content a game has to offer. Unfortunately, this is one of Desync’s shortcomings. There are no difficulty settings, it’s just insanely hard all the time. As such, if you simply cannot beat the level you’re on, or you’ve tried so many times you can’t bear the thought of continuing, then you’re stuck. And, frankly, that sucks.

But, hey, at least the tunes are sweet.

In fact, Desync’s soundtrack is the best I’ve heard in years. The game’s ‘80s synth from Daniel Deluxe and Volkor X is spot-on and couldn’t possibly fit more brilliantly with Desync’s frantic pace and neon-poly exterior. Damn if it isn’t satisfying to dispatch hammer wielding, spike throwing, digi-monsters to the synthetic sounds of the most awkward, but strangely amazing, decade in history. If you’re not playing this game loud, you’re doing it wrong.

Desync will hook you like an opioid junkie with its impressive mechanics, torture you with frustration, dazzle you with its beauty, and have you aching, masochistically, for more (please, sir, may I have another?).

An immensely tough, but amazingly satisfying shooter experience for only $15 (USD). If you’re looking for a serious challenge, a brightly colored, uniquely appealing geometric aesthetic, or the best ‘80s soundtrack you never knew you needed in your life, then Desync is your jam.