The curse of having made one of the best games of all time is that your future work will always be compared to it. And the curse of writing about From Software games is that comparing them to Dark Souls is nearly unavoidable. It’s useful as a reference point, but the problem is, for a lot of people, “more like Dark Souls” means good and “less like Dark Souls” means bad. Having played Sekiro: Shadows Die Twice for about three hours, I can say that it doesn’t feel much like Dark Souls, but it definitely feels like a From Software game, and its combat may be the best from the developer yet.

I had studiously avoided all of the trailers, interviews, and gameplay videos already released about Sekiro, hoping to go into the game defenseless and ready to be surprised. But then I got the opportunity to play a pre-release demo, and — well, I only have so much willpower.

If you’ve managed not to spoil yourself yet, the gist of Sekiro is that you play a shinobi (the titular Sekiro, or “one-armed wolf”) trying to rescue his young master in a fictionalized version of Sengoku-era Japan. You’re equipped with a prosthetic arm that lets you fire grappling hooks to traverse the world as well as use all manner of weapons, from a shield-breaking axe to distracting firecrackers. You also have the power to return from the dead when slain, which you charge by defeating enemies. Sekiro’s combat is dominated by swordplay and reliant on a new (or at least newly formalized) system called posture. To defeat your enemies, you have to perfectly time your strikes and deflect your opponent’s attacks to break their posture before they break yours, thus opening them up for a deathblow. 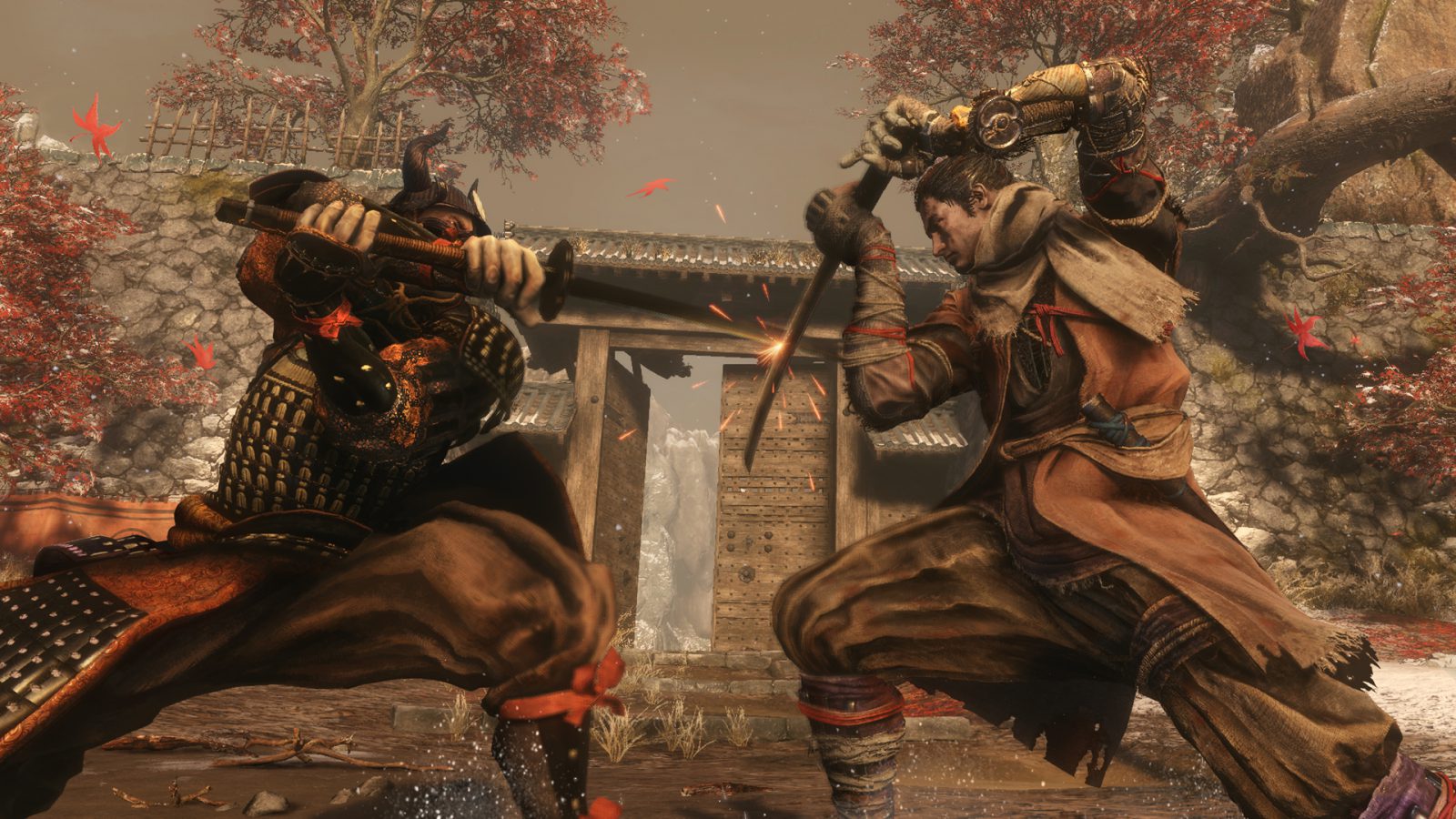 After binging as much as I could on Sekiro gameplay videos, I felt ready to at least avoid making an absolute fool of myself when I got my hands on the controller. Reader, I was not.

One common fear among the “git gud” contingent of FromSoft fandom, whose egos have become tragically linked with their ability to correctly time button presses, is that Sekiro will be too easy, thanks to its generous resurrection system. I can now say with confidence that those fears are unfounded.

Sekiro may have the most demanding combat of any FromSoft game yet. Rather than hiding behind your shield or weaving out of attack range, you’re forced to confront enemies head on. Lesser foes can be killed by simply whittling down their health bars, but even the flimsiest swordsman is fairly adept at blocking. If you just go in swinging your sword, most of your attacks are going to be deflected, which will deplete your posture and give your enemy the advantage. It’s much more effective to instead deflect their attacks and set them up for a deathblow, and with bosses, it’s mandatory. The system turns combat into a deadly dance that requires intense focus and battlefield awareness in even run-of-the-mill encounters. 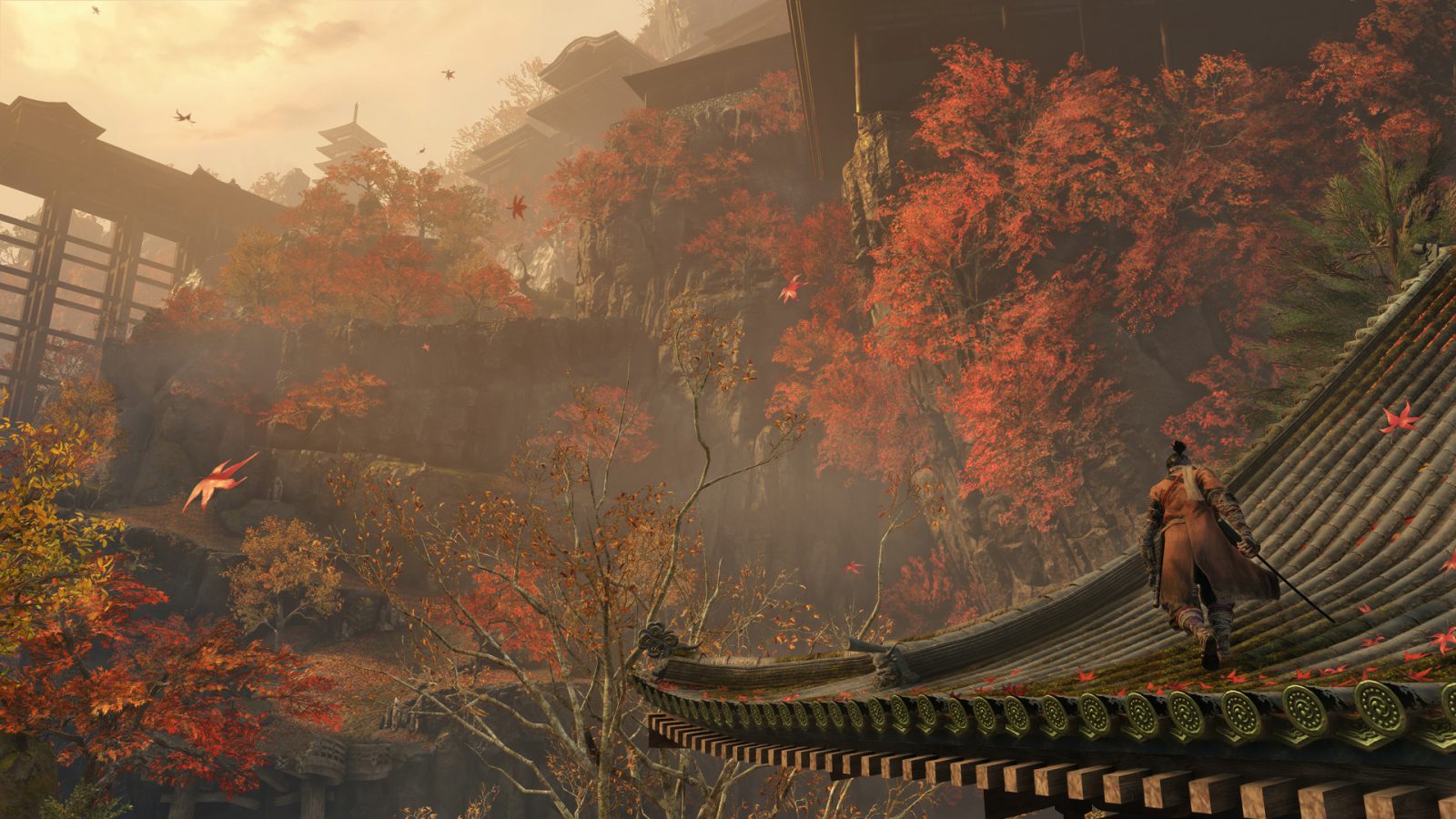 If you’ve practiced your parrying skills in Dark Souls and Bloodborne, you’ll be pretty well prepared for Sekiro’s combat. I, being a coward, almost always resorted to blocking or flopping around the environment like a rookie break dancer, so I was fairly anxious about the prominence of parrying when I started the demo. Fortunately, I took to it much more than I expected to. Unlike in Soulsborne games, you don’t necessarily take damage if you mistime a parry in Sekiro. The window to perform a perfect deflect seems just as small, but since the deflect button is the same as the block button, you just end up blocking if you slightly misjudge the timing. That means losing posture and possibly setting yourself up to be counterattacked, but it’s better than taking a sword to the skull.

Sekiro looks to be far less punishing than Bloodborne or any Souls game, but no less deadly. In the three hours that I played Sekiro, I died far, far more often than I did in the first three hours of any Soulsborne game, and perhaps more than in almost any three-hour chunk of those games. The difference is that dying doesn’t mean starting from scratch. Instead, you can just get back up and keep fighting on the spot, thanks to an ability called Dragon’s Heritage. You gain one use of this ability each time you rest, and can gain more from killing enemies. I started to see the potential of the system in the demo: keeping minor enemies alive as you take on a boss to give you another resurrection chance, choosing the most advantageous place to die when the end looks near.

What seems most interesting about the system, though, is how it exemplifies what may be the very core of FromSoft’s games. In Dark Souls and Bloodborne, you die over and over to learn how to overcome your enemies and use that knowledge on your next run. Sekiro just shortens the distance between learning a lesson and applying it, cutting out the long run from the last checkpoint and your corpse so you can immediately correct your mistake. Or try to, anyway. 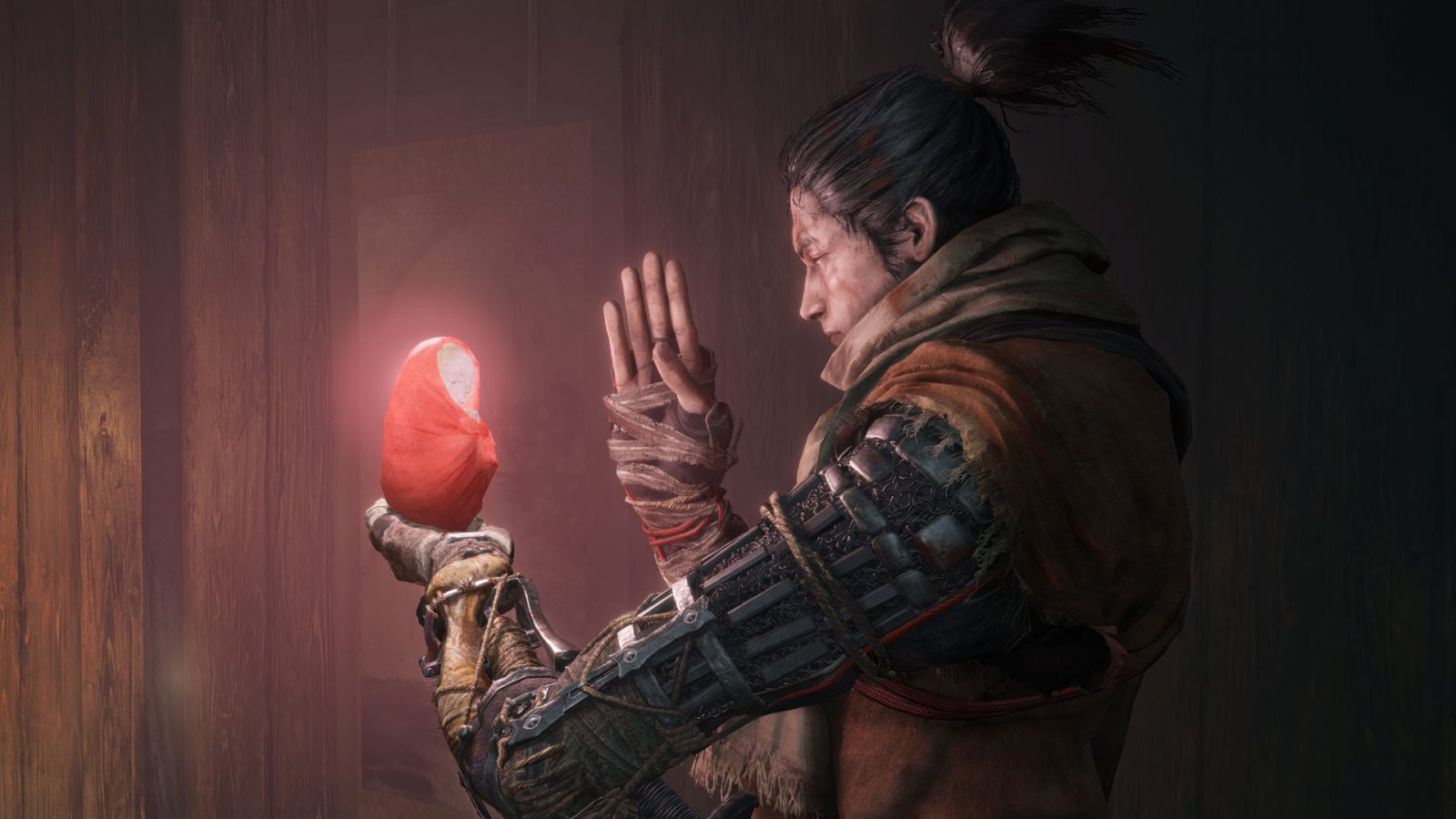 Resurrection is more than just a handy gameplay conceit, too. It seems intrinsically tied to Sekiro’s story. Your character’s Dragon’s Heritage was granted by his master, who is referred to as the Divine Heir. When I heard those terms in a presentation before the hands-on session, wheels immediately started turning. Given Dark Souls and Bloodborne’s obsession with recursion and inheritance, it’s easy to see how Sekiro might continue the pattern they started.

We also learned more about what death means in Sekiro from the demo. When you’ve used up your resurrection ability and fall in battle again, you immediately lose half of your money and experience points (which are separate resources in Sekiro). There’s no running back to where you died to recover them, but there is a chance to avoid the penalty entirely. From time to time, you’ll be granted Unseen Aid, which the game describes as the intervention of the gods, and you won’t lose anything upon death. We’re told that each time Sekiro dies, he pulls his life force back from the world around him, reducing the chance of receiving Unseen Aid in the future.

Each death also drains the essence of characters who have come into contact with Sekiro, some of whom make their home in a central temple hub similar to Dark Souls’ Firelink Shrine or Bloodborne’s Hunter’s Dream. Die enough times, and they’ll be inflicted with a disease called Dragonrot, which weakens them somehow. In-game, they start to cough and gripe about their illness, and there are suggestions that they may even die if left untreated. There are ways of restoring your Unseen Aid chance and curing Dragonrot, but these two concepts seem to have a lot more to them than we’ve been shown yet. 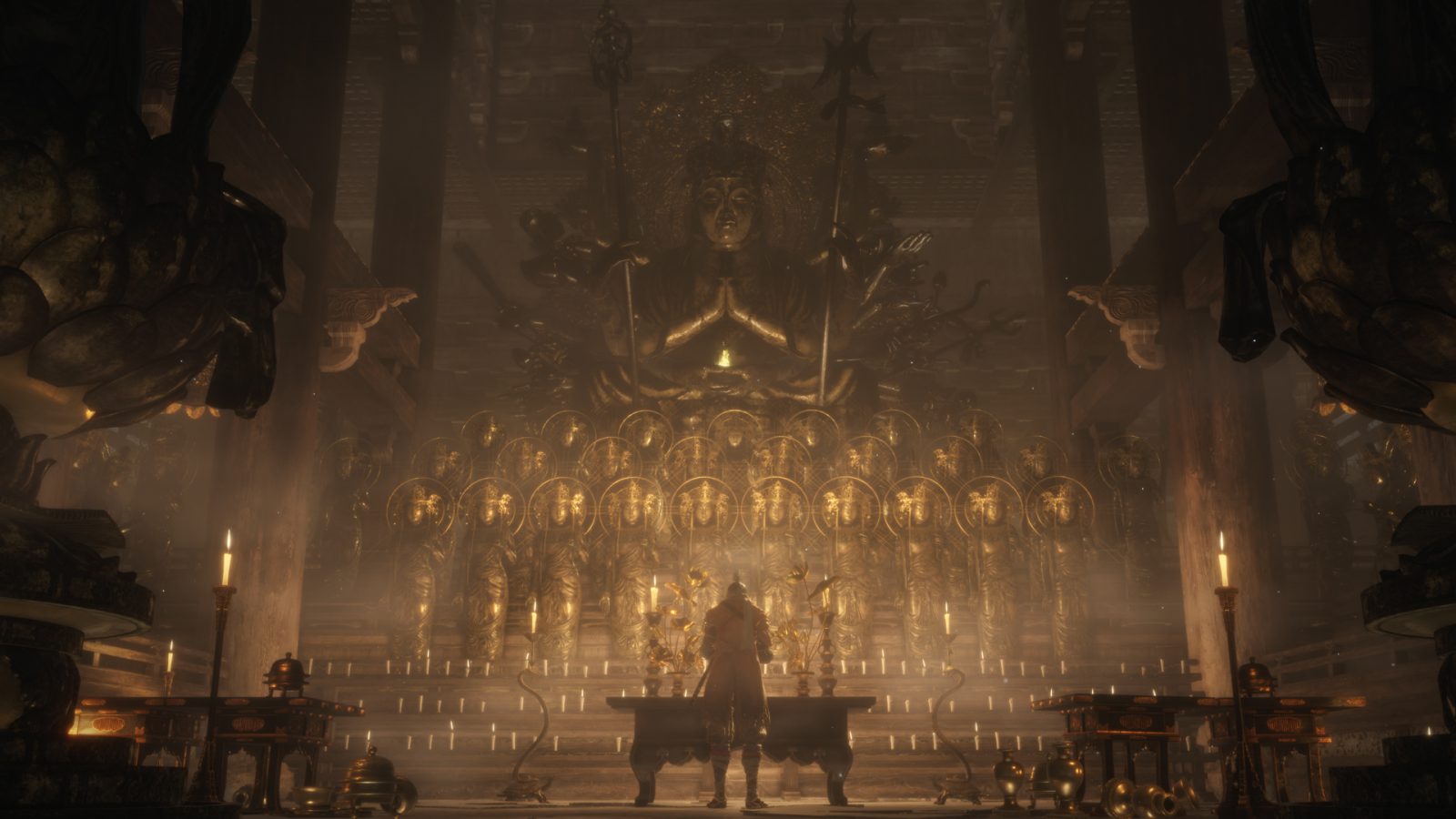 This is probably where Sekiro looks closest to its predecessors. There’s clearly a lot going on behind the scenes that we’re only seeing the barest glimpses of, meaning there’s plenty of room for Dark Souls-level lore or a Bloodborne-like mid-game twist. We simply won’t know until the game is out, but I certainly saw enough hints peeking from the demo’s corners to make me eager to uncover the rest.

You can find out more about what we saw in the demo, plus see 20 minutes of exclusive gameplay footage, in our video preview embedded above or on our YouTube channel.