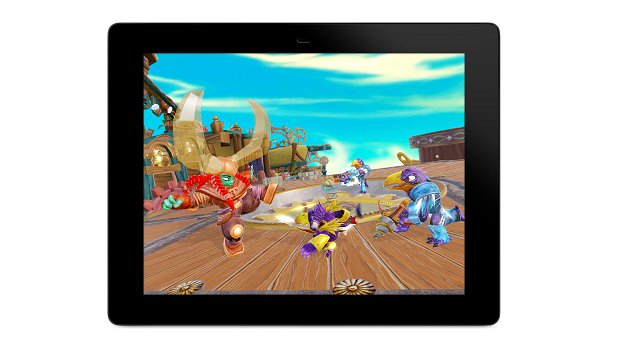 I recently got to sit down for a hands-on preview of Skylanders Trap Team, and walked away confident that the series will likely remain as kooky and fun as ever. But I wasn’t ready for what I saw next:

Skylanders Trap Team, running on an iPad. Like, the whole game.

It’s really an impressive sight. Along with the console versions of the game, Activision is releasing a starter pack for tablet versions that includes everything you’d normally get––two Skylanders figures, two Traps, the portal, and the game.

This portal’s a bit different from the standard bases you’ll normally get, though. First off, it’s Bluetooth, meaning that you can wirelessly connect it up to one of several different tablets. Currently, it’ll run on iPad (3rd generation and up), Nexus 7, Kindle Fire HDX, and Galaxy Tab Pro, S, and Note devices. A built in slot on the back of the portal is an inspired bit of genius, and will prop up your device of choice for you while you play.

You’ll want to make sure your tablet is propped up in order to use the included controller. That’s right––you’ll have a proper controller to play a proper console game on your tablet. When it’s not in use, it tucks right into the bottom of the base. It might not be the best controller out there, but based on the brief level I got to play, it should handle pretty much anything the game can throw at you. It won’t work on anything other than Skylanders, though––nice try. And if you don’t want to use the included controller, you can still use touch controls to move your Skylanders around. Either way you choose, both solutions work way better than you’d think.

The game itself is virtually the same game you’d find on consoles, though the graphics are (understandably) not quite up to the same level of fidelity. Still, the charming Skylanders art style shines through, even if some of the textures look a little less detailed. Also, if you don’t want to use the portal, you don’t have to, as the game will store two digital Skylanders and traps for you, available to use at the tap of a button.

Skylanders Trap Team might simply be more of a good thing, but the tablet version is looking like it should be something truly special––a full, console quality title, right in the palm of your hands. Look for it on October 3rd, the same day as the console versions, for the same price of $74.99.