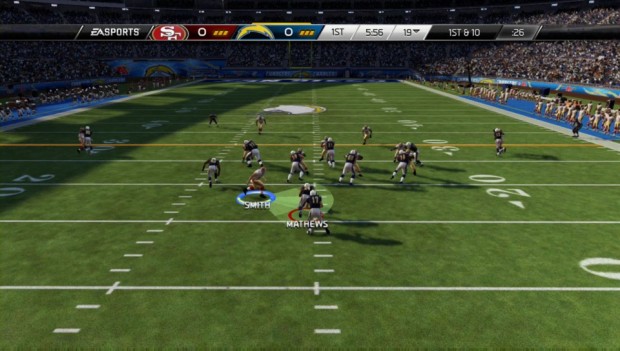 With the month of September now upon us, football will be appearing on television screens across the country come Sunday for at least the next three months. But as we know, with football season comes yet another installment in the long running Madden NFL franchise. This go around, EA Tiburon has put a significant highlight on beefing up the defensive side of the game. But apart from that, many hoped this would be the first real next-gen version of the game, with the initial PS4 and Xbox One release of Madden NFL 14 being underwhelming. For EA to be successful on both fronts, they must nail presentation and mechanics while maintaining the core of Madden which has kept it alive in so many players’ eyes.

The main focus of improvement in this latest version of Madden was on the defensive side of the ball. It seems that we are hearing about slight cover and control changes that should “enhance” defensive controls on a yearly basis. But this year, EA went all out and not only tweaked certain controls but also included some brand new features. One of those is a timing element that requires you to begin your rush quickly to get a slight momentum build for when you try to shed your blocker. It is much more useful for the linebackers and defensive line, obviously. Despite it only helping half the defense, it works perfectly and makes jumping just in time finally feel useful. Getting an early jump in real football is key on the defensive line, setting the tempo for the remainder of play. The timing is spot-on with just the simplest of slip-ups hurting your chances of shedding the blocker. This is one addition that, in a few years, we will wonder how we ever played without it.

The other major change comes in the form of a tackling cone which appears as you approach the player with the ball. The cone signifies your tackling zone and gives you two choices, you can press X to do a safe tackle which will bring the other player down reliably. On the other hand, you can do a risky tackle with square which will look cooler, and have a chance of jarring the ball free, but you are more likely to be shaken off by the ball carrier as opposed to if you were doing a safe tackle. The concept this feature introduces is an interesting one, making you think of performing different tackles for different players. For example, if you are a high profile linebacker, you know you can tackle well so you take the risk, but if you are a defensive linemen, you need to play it safe in hopes of bringing the ball carrier down behind the line of scrimmage. The only part where this really stumbles is the odd cone interface placed on the screen. In a game that is all about realism, having a cone overlay on screen breaks immersion and just seems awkward.

On the offensive side of the ball, the biggest addition is in the form of being able to change your playcalling tactics. You can choose from no huddle, normal, and a chew clock option which will help you shed minutes from the remaining time. This becomes very useful later on in the game as you begin to wind things down and do not want to spend time finding ways to kill the clock. Of course, those two minute drives at the end of the half and end of the game are much easier to perform now due to this addition as well. While it is fairly small change, with the defense getting most of the focus, the addition of the three play calling options definitely helps the flow of a game – something that has consistently been an issue in the Madden franchise.

Few changes have come to the online play as it continues to play similarly to past years, which is not always a positive thing. Finding a game is incredibly easy connection issues can hamper your experience. In-game lag seems to appear at the most inopportune times making games more frustrating than exciting.

As hoped for, presentation has also taken a boost since Madden NFL 25. While you expect a visual boost with this being on next generation consoles, there are other slight tweaks such as the 1st and 10 marker appearing on the football field, beside your offense at the beginning of each play. This is a small change but it still makes the game look much nicer, decreasing scoreboard clutter on the screen. Technically, Madden NFL 15 has stepped up its game in nearly every aspect. The field looks leaps and bounds better than in the past, with blades of grass being noticeable from low angle camera shots. The more popular models such as Peyton Manning and Robert Griffin III received no significant improvement, but they already look and play like their real-world counterparts. But on the other hand, smaller players tend to lack that realistic brush stroke you hope for. The physics system is beginning to show its age also, with awkward plays still happening way too often.

Some of the other staples of the Madden NFL franchise remain in the game such as the Ultimate Team mode. In Ultimate Team you get a starting deck of cards that features a variety of players, all of which are lower caliber. You then proceed to play games with those players in hopes of eventually getting much better cards. This is EA’s devious little way of prying out some micro transaction dollars.

As you would expect, the Connected Franchise mode is still prevalent in Madden NFL 15. While other aspects of the Madden franchise have remained intact for Madden NFL 15, the player aspect of Connected Franchise has been gutted and is now a shell of its former self. Once you begin your own career, you choose your own team instead of working out and being drafted. You get the choice of being an early pick, mid-draft, or undrafted free agent. Each selection comes with certain pros and cons such as an early pick starts with a higher overall but also has more pressure on his shoulders and later picks have low overalls but no expectations.

The main issue here is that these “expectations” are figurative and seem to play no real part in the gameplay. The only reason to choose later picks is if you want it to be much more difficult to achieve success. While it was very cheesy, doing other side activities like hiring an agent, doing interviews, etc. added a certain life to the mode which it does not possess otherwise. None of those options are available to you in Madden NFL 15.

The EA Sports UI system has returned in Madden NFL 15 and it continues to be impenetrable. It is clear they have a certain design in mind, but it falls flat on its face. Not only does it bring about a ton of frustration, it makes the Connect Franchise mode less enjoyable as you attempt to make trades and do different tasks within the cluttered menu system. The menu system has been outdated for years, and continues to be in need of a serious deconstruction and redesign. Seriously, Tiburon – it is time to open the wallet and hire a UI designer to help you.

There have been way too many years where you can describe the changes to Madden as “minimal, but helpful.” This year, the changes to the defense and boost in presentation slide it away from “minimal” and feel much more substantial. But unfortunately, I find the player aspect of Connected Franchise to be one of the biggest parts of the whole Madden experience, and it being a husk of its former self is more than a little disappointing. That said, Madden NFL 15 is definitely one to jump into if you have not played a Madden game in years. It will be very interesting to see how EA Tiburon builds upon this success in Madden NFL 16.