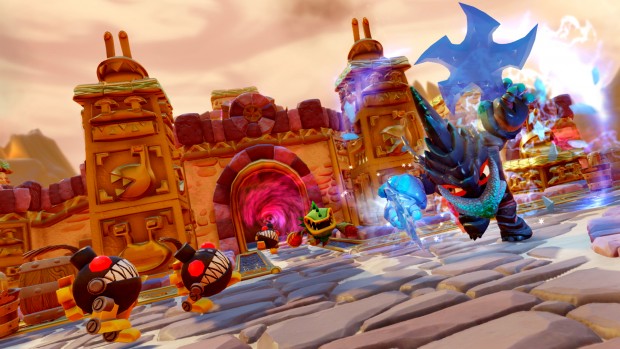 I wasn’t sold at first. Skylanders Trap Team looked like a gimmick—a neat looking game with a dumb reason to buy a whole bunch of extra figurines. I’d only ever seen it in videos or at loud press events, and it’s really hard to see what exactly Toys for Bob is trying to do without being up close and personal with it.

Then, I got put in a closed room, with me, a TV, and the portal. The boss on-screen was on its last legs. I placed the trap into the portal, and the boss clung for dear life as a swirling vortex started sucking him in. As he flew inside, the sound slowly faded out of the TV… and into the portal sitting in front of me on the table. The sound of hollow knocking emanated from the glowing hunk of plastic. I had just “ripped” a game character out of the digital world, and into the real—or so the magic trick went. It’s still very much a gimmick, but it’s one that will make children believe magic exists.

Skylanders has always introduced new wrinkles to their “toys to life” game franchise. Giants introduced hulking beasts that, while cool, weren’t all that different from the normal Skylanders characters. Swap Force made things a bit more interesting, letting you mix and match several different characters for a whole range of combinations. Trap Team represents another twist—this time, whenever you beat a boss, if you have a trap of the same element (each one sold seperately, of course), you can suck them out of the game, and place them “inside” the little plastic trap. Once trapped, these little buggers can be summoned as long as their energy meter is completely full, giving you an additional edge in your fight.

Based on the brief time I spent playing a handful of levels and challenges, Trap Team is looking like it will be more Skylanders—which isn’t exactly a bad thing. Now, you’ve got the Trap Team themselves, like the awesome-looking Viking woman Head Rush. You can also buy Mini Skylanders—cute little tweaks on existing Skylanders characters that you can use to fight and do… something (they were awfully coy about whether the Minis will unlock additional areas when I asked).

In addition to the standard monster bashing, you’ll also get to play a whole new variety of minigames. One is a simple card game not unlike those found in Final Fantasy, while another has you pressing buttons in time to the music played by an all-skeleton ska band. These small diversions, in addition to the tower defense-like Kaos Challenges, prove that, even if you don’t buy every single figurine out there, there’s still plenty to do here.

Skylanders Trap Team may simply be adding on to an established base, but given my time with the game, that base is still as fun as ever. And yeah, the whole Skylanders franchise may feel like a big gimmick, but it still feels like magic is happening whenever you put that toy on the game’s portal. Look forward to draining your wallet even further when Skylanders Trap Team launches on October 3rd on current-gen, new-gen, and mobile platforms.