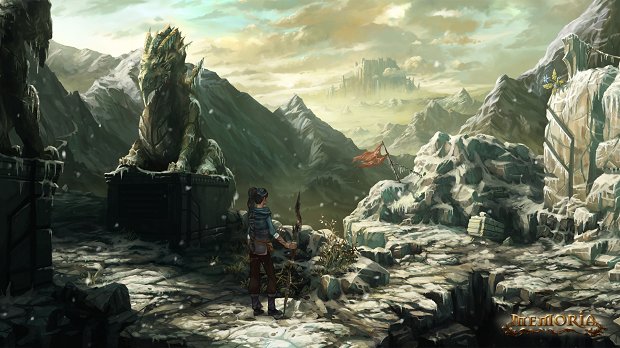 A consequence of the rise of digital distribution has been the resurgence of long-dead genres of games.  We’re seeing it all over — Star Citizen is reviving the long-dead space combat sim, Torment is bringing back the Baldur’s Gate-style cRPG — even the venerable point-and-click Adventure has shambled out of the grave with the help of studios like Telltale and Daedalic Entertainment.

[singlepic id=14720 w=320 h=240 float=left]While Telltale has had success with licensed properties like Sam and Max or The Walking Dead, their Hamburger compatriots have been taking chances on riskier, more original creations like Deponia or The Whispered World.  I got a chance to try out Daedalic’s upcoming releases and from what I’ve seen, Memoria is creative enough to do their namesake proud.

With any point-and-click adventure game, you inevitably get stuck staring at the screen trying to solve the puzzles, so it’s good that the luscious backgrounds in Memoria make it worth your while. Cool blues and greens illuminate the forests of the first few moments of the game, but they’re quickly replaced with rusty reds, oranges, and yellows when Memoria takes a detour into the past.

This past setting — presumably where the majority of the game will play out — follows a young princess named Sadja and her quest to reclaim the power of one of her distant ancestors. Things quickly go off the rails, and Sadja must find her way out of a deep tomb.  All of these locations — the tombs, the outer chambers, the forests — are absolutely beautiful, and I found myself staring at them more than once.  Sadja’s world trades standard European baileys and castles for a distinctly Persian or Ottoman aesthetic.  You’ll find few dragons, but golems and demons abound.[singlepic id=14715 w=320 h=240 float=right]

Every bit of dialogue in Memoria was fully voiced, although in my preview build all the lines were spoken auf deutsch. It was a bit odd hearing German voices in such a west Asian setting, but the dissonance quickly faded thanks to good old-fashioned subtitles.  Sadja is a great character, but some of the people around her died so fast that it was hard to get a handle on them — they all had the air of redshirts.

For all my raving about the lush presentation, the meat of any point-and-click adventure game, however, is the puzzles.  Nothing in the world is more frustrating than having to ferret out the specific solution that the developers decided was the “right” one.  Fortunately, I was able to solve nearly all of the puzzles in the preview without getting too frustrated — though there was a puzzle about 90 minutes in that drove me absolutely bonkers.  I don’t want to spoil any of the puzzles, so I won’t describe the problem here, but I will say that it’s frustrating when the game presents you with an obvious solution that you can’t use. This puzzle was so bad that I was reduced to the dreaded “try all items on everything” technique in an attempt to luck upon the solution.  However, that was the only major hitch I found.

[singlepic id=14718 w=320 h=240 float=left]I generally don’t enjoy point-and-click adventure games, and I say that so that you’ll understand how significant my interest in Memoria is. From what I’ve played, Daedalic have a wonderfully original world on their hands, and I can’t wait to explore more of it.