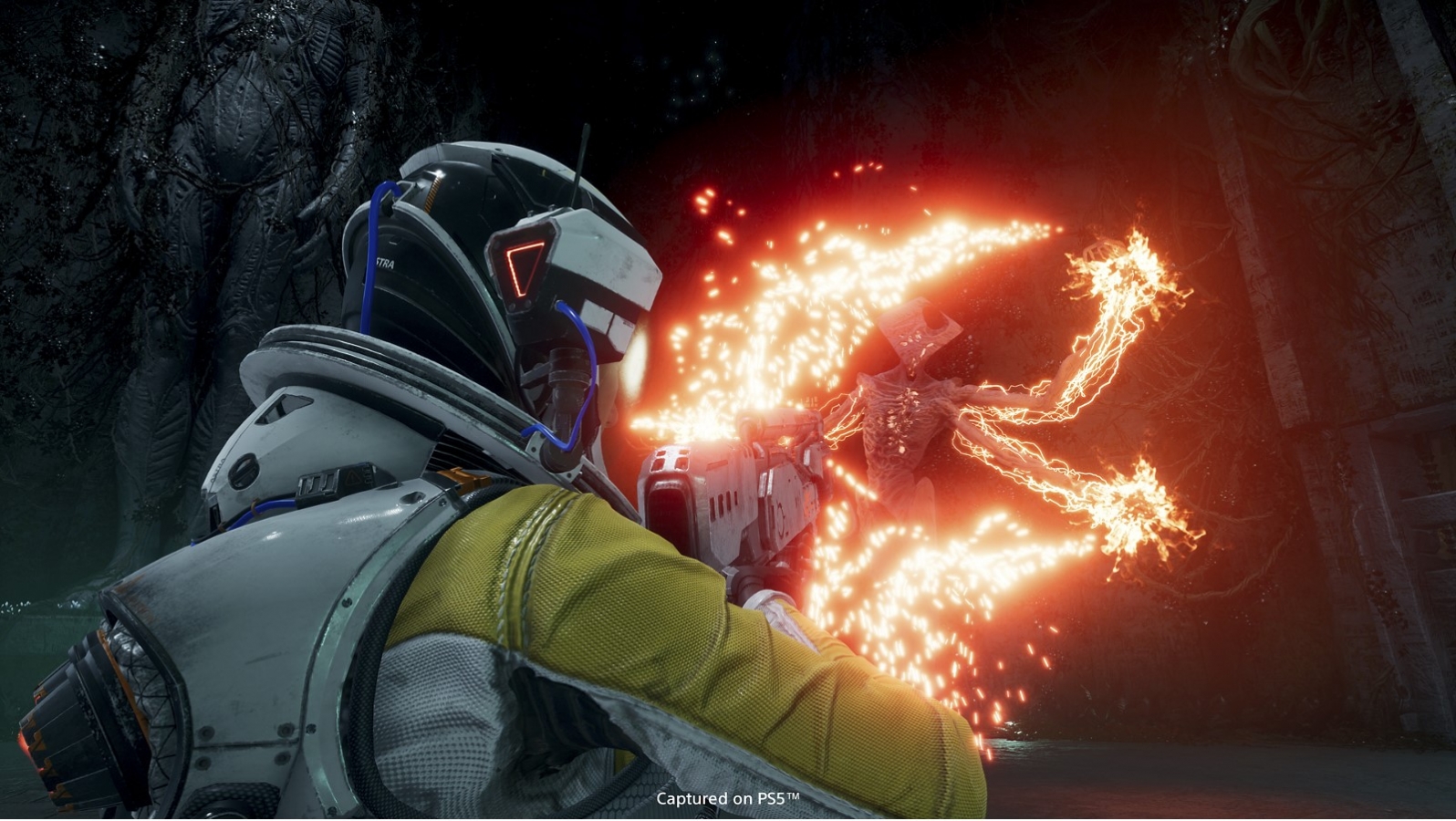 Returnal is a game that has many fans and critics divided. On one hand, all the trailers show something that looks unique, but on the other it’s pretty expensive for something made by a studio who has mostly handled indies to this point. I get the caution, we’ve been burned by quite a few games in our lives. But after a few hours with Returnal, any reason I have to be wary of it has turned into full blown excitement, and I’ve got several arguments for this to be your next purchase.

So let’s start off with a little background on the game before we talk about what makes it tick. You play as Selene, a scout sent to investigate a signal coming from Atropos, a hostile alien planet. On the way down your ship gets hit and you’re forced to crash land, upon waking up you find you’re stuck here, and worst still you almost immediately come across a dead body that happens to be you! It seems like there’s a big mystery to unpack, and it’ll unfold as you navigate multiple biomes in this third-person action roguelike.

No, I’m not talking about the air on Atropos, but the environment around you. This extends far past what you see, but to what you hear and even what you feel. Atropos starts out as a dreary forest and leads into a barren red wasteland, but has even more for you to explore past that I can’t talk about year. The forest is the one I want to stick to covering, a rainy foliage filled area that just drips of sci-fi ambience.

There’s a lot more to the forest than just the trees however, and Returnal’s spooky backdrop is accompanied by Sony’s own 3D audio. It’s almost like you feel every raindrop falling from the sky in the first area (more on that in a moment), and the effect makes the location you’re roaming even the more horrifying. Ray tracing is a term thrown around a whole lot, mostly in lighting and shadowing effects, but leveraging ray tracing in the 3D audio means every twig that cracks beneath my foot and every growl of a hostile creature has a correlation with where that sound is coming from. I know an enemy is on the right because I heard the enemy on the right. The lightning crackling across the sky has that perfect Doppler effect and that adds to my feeling of what’s going on. 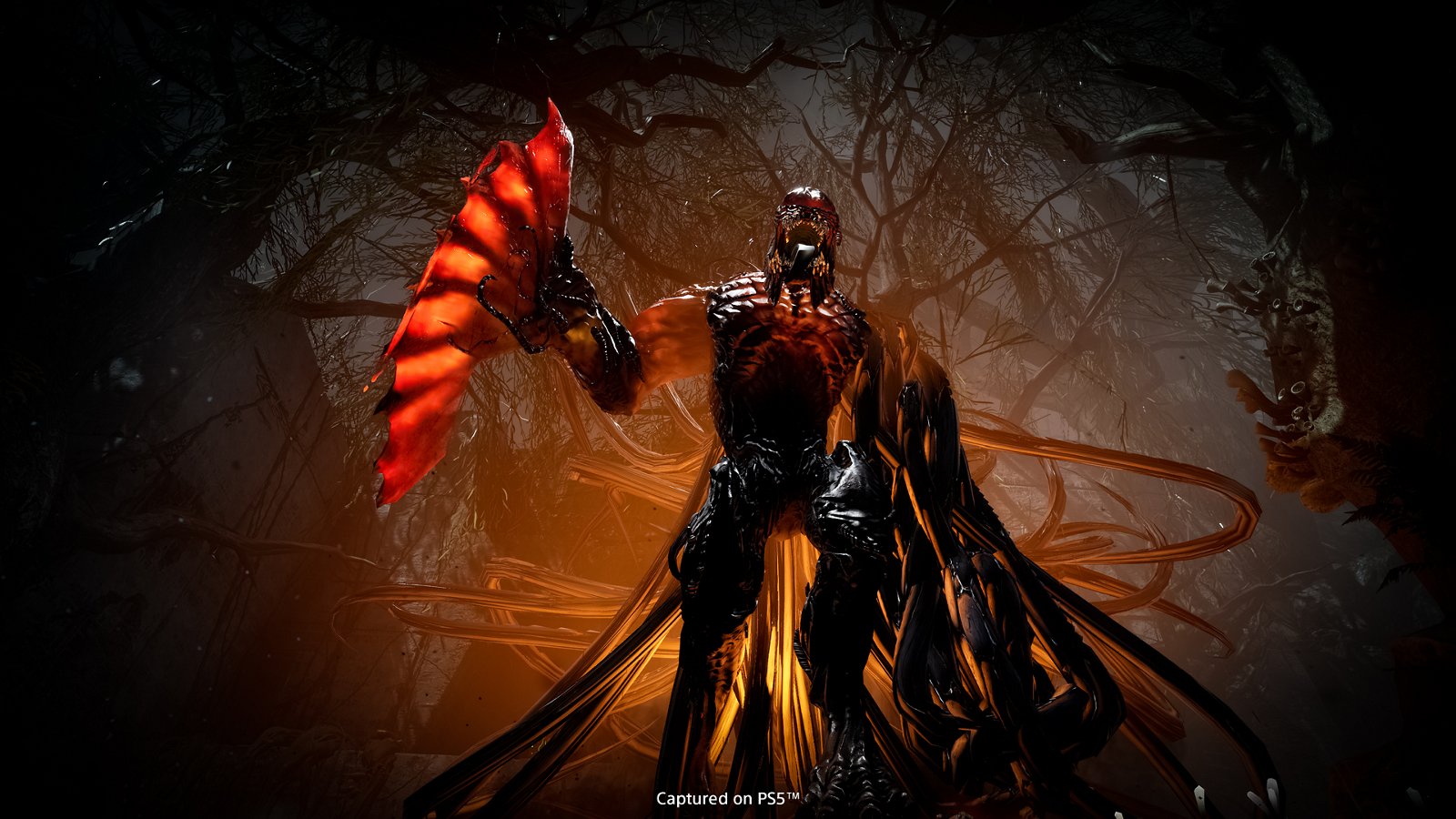 Before the DualSense controller released it was nearly a meme status, everybody assumed the buzz words would be just that, buzz words. But once you get a hold of this controller, you quickly understand it does everything PlayStation said it would. Now, I can say the DualSense is like VR — you have to experience it to believe and fathom how next-gen it is, but believe me when I say it’s an incredible piece of technology. Some developers make better use of the technology than others, with games like AstroBot or Call Of Duty: Black Ops Cold War changing your perception of how a controller should function, while Outriders quite honestly acts like it doesn’t exist. But Returnal is a true next-gen showcase of how a game needs to be built using this device.

I spoke before of feeling every raindrop from the sky and how the 3D audio does a great job at accentuating that. The DualSense capabilities ratchet it up to eleven, with each drop giving the sensation that it’s hitting the controller. The haptics on this bad boy are no joke, and you’re as close to the rain as if it fell from a cloud above you. This continues in other instances, like the lightning I also spoke of feeling like it’s crackling across the controller, but this specific instance cements this controller as legendary, and this is one of the first PS5 exclusives to utilize it. Just so you properly understand this function, I’m dropping a tweet from Blessing from Kinda Funny Games below, as he did a great job capturing how real this feature is.

I mentioned in my preview "feeling" the droplets of rain in the Dualsense and idk if I'll ever get over stuff like this.

Watch with sound on. The sound you hear is the Dualsense on my desk. pic.twitter.com/YxSjWzRY6B

While the haptics are incredible, so are the adaptive triggers. These aren’t necessarily the star of the show, but the smart use of them leaves me wondering what talented teams will do next. Once you’ve earned the ability, your gun will feature an alternate fire function which is a super move of sorts. Instead of mapping this to a face button, Housemarque decided to use the power of the adaptive triggers. When you half pull the trigger, it comes to a locked position and your aiming down sights comes into play. However, when you fully pull the trigger, it pulls up the ability to use your super. I remember reading about this in several of the gameplay previews, and wasn’t sure if it would function properly. Maybe I’d accidentally use my super, or just wouldn’t be able to normal fire because of the functionality. But Housemarque has done an incredible job at using what’s available to them, and while I occasionally pull the trigger back a little too far this ingenious idea has become very comfortable to use. All without making me chase another button.

Housemarque is the studio for bullet-hell shooters, and that influence is prevalent all throughout your playing in Returnal. While I’ve never been drawn to the genre, I appreciate them and I’ve played my fair share of top down bullet-hells as a kid. Returnal may draw from those roots, but not in a way that’s going to leave the player hating what they’re doing. Many bullet-hells leave you in a panic, avoiding masses of projectiles at a blistering pace which can cause players to want to quit. I’m sure I haven’t made it to the harder enemies yet, but the current pace is challenging rather than difficult. Returnal does state at the beginning that they want to test your abilities, and that’s how it feels to me.

Combining this with Selene’s fast paced movement gives you a feeling somewhat like Control from Remedy Games. Jesse’s gameplay style is one of my favorites (and Control one of my favorite games), so watching this smaller studio get something like this right in one of their first tries in creating a third-person action game is extraordinary. You’re going to hear a lot of comparisons to Control in a lot of previews this weekend, and that’s not a bad thing. I mean, Control was a Game Of The Year winner and contender for a lot of publications, so imitating something successful is always a good thing, especially when done right.

Even though there’s a lot going on in the game, the team at Housemarque chose for this game to follow the roguelike genre, and it’s to a surprisingly skillful effect. I’m not much for roguelikes, not because I don’t like the style, but they become too repetitive for me after a while. I know, I know, this coming from the guy who plays Call Of Duty all the time, but that’s how I feel. Returnal manages to make this work because there’s a lot behind the cycle you’re playing over and over. Not only is a narrative interwoven behind your “returning” (which I definitely have no clue about, I get the feeling it’ll all make sense in the last thirty minutes), but the levels procedurally change after each death. I’m not sure if there is a limit to the changes yet, I haven’t died enough, and I did notice the level change stayed the same in subsequent cycles after I restarted Returnal, but it’s fun nonetheless.

There’s truly so much more I want to talk about when it comes to Returnal, but I don’t know enough to give you a full breakdown. There’s still so much of the mystery of the story I don’t know, I don’t have the complete grasp of the inventory, gear, and weaponry yet, and there are plenty more biomes of Atropos to discover. Unfortunately, you’re just going to have to wait for me to finish the game and write up our full review that’ll drop around Returnal’s launch on April 30th. That is, if I can find the time to put it down.