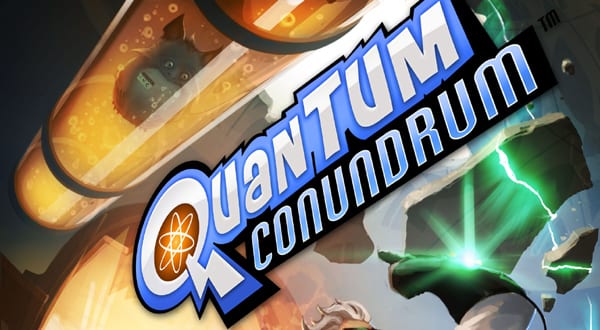 Scott Wade, Concept Artist, and Chris Madden, Concept Lead from Airtight Games gave us our first look at the upcoming first person puzzle platformer, Quantum Conundrum.  You play as a 12-year-old child that was dropped off on your eccentric Uncle’s doorstep.  Unfortunately, your Uncle Fitz Quadwrangle has two issues – one is that he is a kinda crazy scientist, and the second is that he is missing, courtesy of an experiment gone wrong.  You have to use his latest device prototype, the Interdimensional Shift Device (ISD for short), to figure out where he’s gotten off to and rescue him.

The first thing to understand is that the ISD grants the player the ability to remain rooted in our normal dimension while the things around him are shifted to one of several other dimensions. To this end, the player must collect batteries filled with “science juice” (seriously, that’s what they called it) and drop them into ISD power receptacles.  These enable the player to alter the areas and objects around them, allowing the protagonist the ability to manipulate the environment.

The demo begins with one of the strangest dimensions you’ll be able to use – the Fluffy Dimension.  Since our protagonist is a kid, unable of moving heavy things on his own, the player must use the fluffy dimension to turn everything around him to a soft and downy cotton.  Thankfully this doesn’t affect the player, as breathing cotton lungs would likely hurt for the short while you lived.  In Quantum Conundrum the objective is often to simply exit the room you are in – something that proves more difficult in practice.

A sentient robot named D.O.L.L.Y. (the Dynamic Object Linear Ligation Interface) appears throughout the manor, and her only objective in life is to make you happy.  To that end, in this room she is replicating safes and spitting them out of her mouth, tongue hanging out with every ejection.  We need one of these safes to place on a switch, but obviously no 12-year-old is able to lift something that heavy – that’s where fluffy dimension comes in.  With the flick of a button we turn on a nearby fan.  This makes a fan underneath D.O.L.L.Y. begin to blow, but clearly not enough to lift a safe.  Flipping dimensions to the fluffy dimension turns the safe to soft and plushy cotton, but now the fan is able to lift it and throw it into the glass you need to break to progress.  Unfortunately, now the safe is too light so the player will have to use their timing to allow the safe to sail across the room, and then flip it back to our dimension to make it crash through the glass.  In this same way, the player can pick up furniture and other interactive objects in the world to solve puzzles.

Moving into the next room we spot a pile of books.  Each is a play on words relating to science – there are 54 in all throughout the game to find as a sort of Easter Egg.  This sort of comedic flair extends to the rest of the environment as well.  Later in the demo we saw a picture that looked like a normal hillside, but when flipped to the heavy dimension it became encased in iron, changing to the reverse gravity option brought dinosaurs to the painting, and the fluffy dimension made the whole thing look downright cute and saccharine.

Back to the game proper we run into a “Portable masto-energy converter” – you might know this as a scale or button.  Using the same fluffy system allows us to do the most natural thing in this scenario – put the box on the scale to open the exit from the area.

Moving half way through the game we find ourselves in need of two safes, but we find that there are there are no safes in this area, and lasers block our path beyond.  We find a cardboard box, but obviously that won’t hold up to the heat of the lasers.  This is where we discover our next dimension – the heavy dimension.   Turning the cardboard box into a cast iron immovable force after fluffy to throw it towards where we needed it to be to block the lasers, allowing our exit.

Moving a bit further into the game, we are exposed to another dimension – slow motion.  We see it used in a situation similar to the above, but where don’t have enough boxes to get through the lasers.   Using the throw mechanic, we slow time significantly, allowing us to run through the laser field before they are automatically reactivated.  Since you move full speed while everything else slows way down, you can make it through the laser field without issue using only one object.

On the other side of some safety glass we see robotic workers carrying safes.  We can’t break the glass so we can’t go that way.  There are lasers guarding an area, but using the heavy dimension we are able to stop the laser.   A critter called Ike, who is able to see the entire multiverse at once, is nearby and holding a fluffy container.  We can’t get through the wall of lasers with the box, but using a heavy iron dimension and and slow motion, we re-activate the scale by moving faster than the lasers, making it back into the other room to free the fluffy battery from Ike.  Sometimes you have to choose what dimensions you might need to complete the room, as you can only have four.

Moving even further into the game we begin to see how all of these advanced techniques combine and interact.  In this case, we are trying to use some more safes barfed up by D.O.L.L.Y. that are falling entirely too quickly to be safe.  By using slow motion we create our own descending elevator to get to the next room.  Needing to get a safe much further than before, we use another skill to help move it along – forward momentum.  Throwing a safe, then grabbing it in the air with the forward momentum power propels the safe forward.  Switching it back to our dimension it begins to fall, but using the gravity inversion skill, we are instead able to make it sort of ‘swim’ it’s ways across to the area near the player.  Switching back and forth makes it seem to ‘fly’ – good as you’ll need to jump on top and ride it to reach your next area.   As our demo team reaches the end of the level we are reminded that Preordering gives you a chance to have the art team render your likeness into the game, and then patch you into the PC version.  The game is heading to Steam on June 21st, with an XBLA and PSN release later this Summer.  Look for our continued coverage throughout this entire week.  Based on what I saw and played – you might want to pre-order right now.  If you need more convincing, check out the official E3 Trailer for the title.