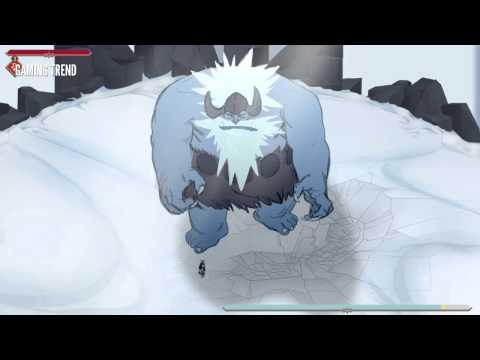 [The video above contains some language on my part, and is an archive of the stream I did of my first playthrough of Jotun’s Alpha]

Jotun, like a lot of games recently, draws upon Norse mythology as its inspiration. You play as Thora, a recently deceased Viking who “died an inglorious death,” who must triumph over the challenges presented to her by the gods so that she can impress them enough to enter Valhalla. In Norse mythology, that of course means a giant hall located in Asgard. It’s a simple premise, and from what I gathered from the Alpha I played, the story is straightforward and minimalistic. It might be important in the main game, but it’s not really why I was enamored with it.

Rather, every other element of the game enraptured me – the pieces of Jotun, from the stylized art to the gorgeous music, from the intriguing exploration sequences to the fearsome boss at the end. This is how you assemble a fantastic game. I was a bit worried, noting the similarities between this and Shadow of the Colossus going in (only boss fights for combat), that Jotun would fail to capture the spirit of that game on a 2D plane.  I could not have been more wrong.

The exploration sequences, where you look around large areas for runes that you need to collect in order to progress, are extremely strong and interesting pieces of the game in their own right. Instead of just giving you a direction and telling you to go find a boss by walking there, each environment engages with a dynamic challenge or interesting obstacle. For example, in the first area, there is a giant sea snake that tries to attack you from beneath the ice and you have to avoid it while trying to get to the rune.

This vista is amazing, letting you look down on a level you will soon be exploring.

Moving on, in the beginning the camera angle annoyed me with how much it limited sight, but Jotun made me realize the benefits quickly. The game lets you see enough that you can find your way around the immediate area, and then in specific locations pulls out to give you a better view. The camera pulling back is only used when it is needed, and it makes it ever more impressive when it pulls out to show you a big and beautiful environment. Some of the backdrops are especially breathtaking, which is an amazing accomplishment for a game completely in 2D. I really love how it uses the act of pulling back the camera in moderation.

In fact, Jotun shows a real mastery of doing things just right. I always felt a little lost in the large exploration environments, but I never went too long without discovering something new that made me feel like I was headed in the right direction. This prevented me from ever getting bored or frustrated with these parts because I couldn’t see much, I always felt like I was making progress. The slight anxious emotion of being lost was prevalent, while the game didn’t draw it out so long that it got annoying. When the environment finds a place that’s more complicated to navigate, there’s always a place for you to observe the way forward from a high place.

The locations themselves, while all still revolving around the same central theme, look different enough to feel like completely different places. The environments also never get boring to explore, not just because you’re always finding new things, but because new elements were introduced to keep things fresh. When I was getting a little bored of walking around, the game presented me with the environmental challenge of a snowstorm blowing in and dealing damage unless I hid behind deliberately placed rock formations. The alpha was too short to find other examples, but if that type of thing continues to be present in the full game, the experience of exploring will never really overstay it’s welcome.

Do not be fooled, this guy is terrifying.

The most important factor of these exploration pieces is that they make the boss fights feel truly special. There are no enemies to fight except for the bosses themselves. This makes them special encounters, and if the design doesn’t match up, then all of the tension building up to that fight is lost. Jotun does not fail on that front; the boss in the demo was a challenging opponent, and was difficult while also fair. The moment when I defeated it was amazing, I really felt triumphant. The best part was that even though the attack patterns themselves were simple and telegraphed, just when the fight started feeling easy, the entire environment changes to give everything a different feel and make it more challenging to use the same tactics as before.

While the fight isn’t quite the same as climbing up onto an enormous beast to find weak points, making the boss a puzzle in itself, it was still a very entertaining and well-designed boss. It was improved by the masterful way it was built up to throughout the demo, and the ultimate defeat of the beast was an amazing way to cap everything off. I can’t wait to see the other bosses, to see if they are a bit more complicated to figure out then this first one was.

There are very few bad things to say after playing through Jotun’s demo, but even though I feel the combat roll could be a bit longer to make it more satisfying to execute, and the strong attack can be a bit difficult to use, those things hardly matter. The experience is so strong that such deficiencies are hardly noticed. The art style and soundtrack are gorgeous, the developer shows a masterful amount of moderation in how they designed the game, and the boss fight was a spectacularly intense way to end the demo. Jotun is one you should keep on your radar, because it’s definitely one I’ll be keeping on mine.