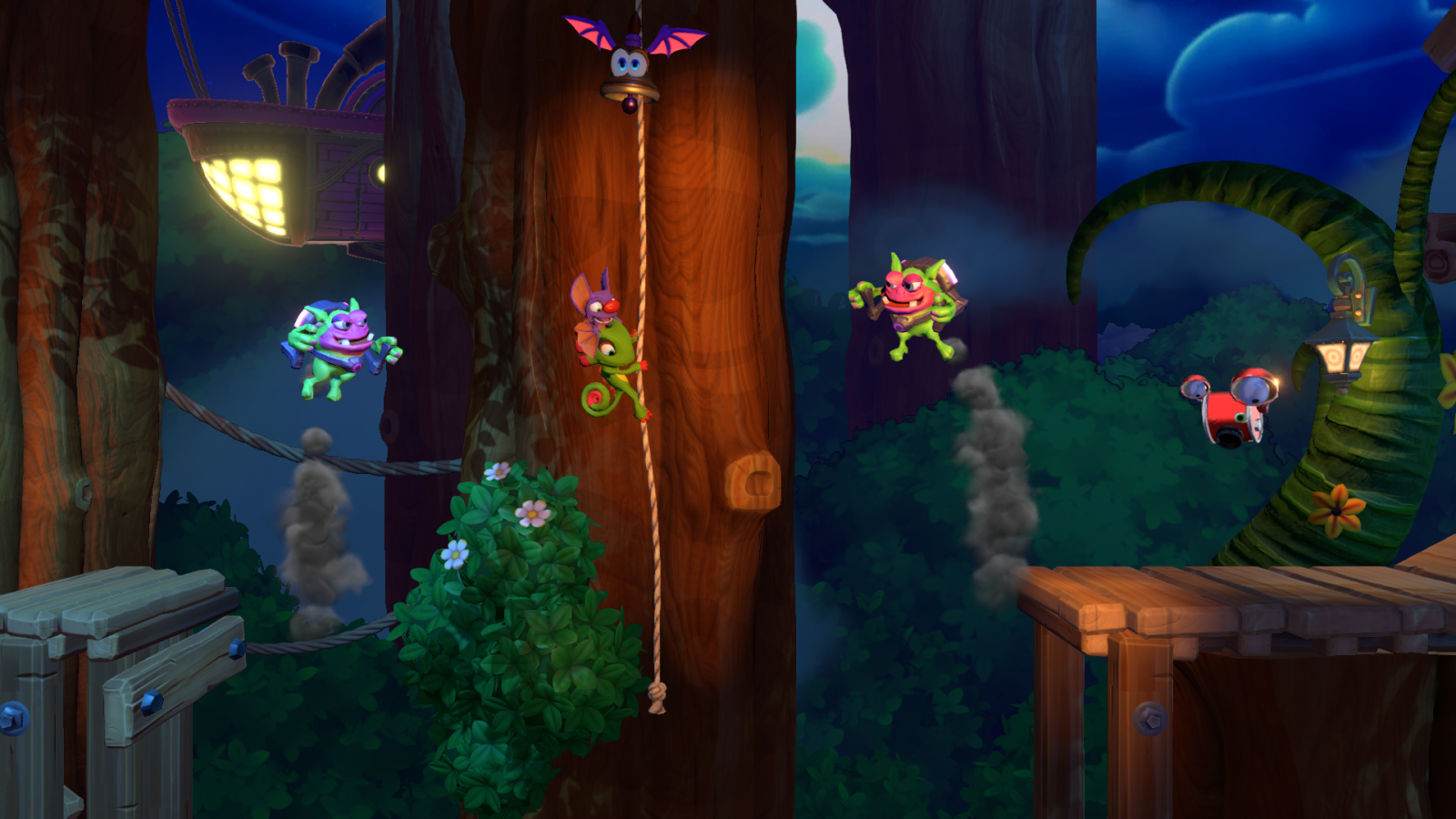 With its first 3D platforming entry, some could argue that the Yooka-Laylee series got off to a rocky start. While we enjoyed the game, reviews overall were mixed.  We weren’t expecting a follow-up so soon, much less in the form of a 2D platformer, but after getting hands-on time with Yooka-Laylee and the Impossible Lair, we’ve determined that this game is the real deal. 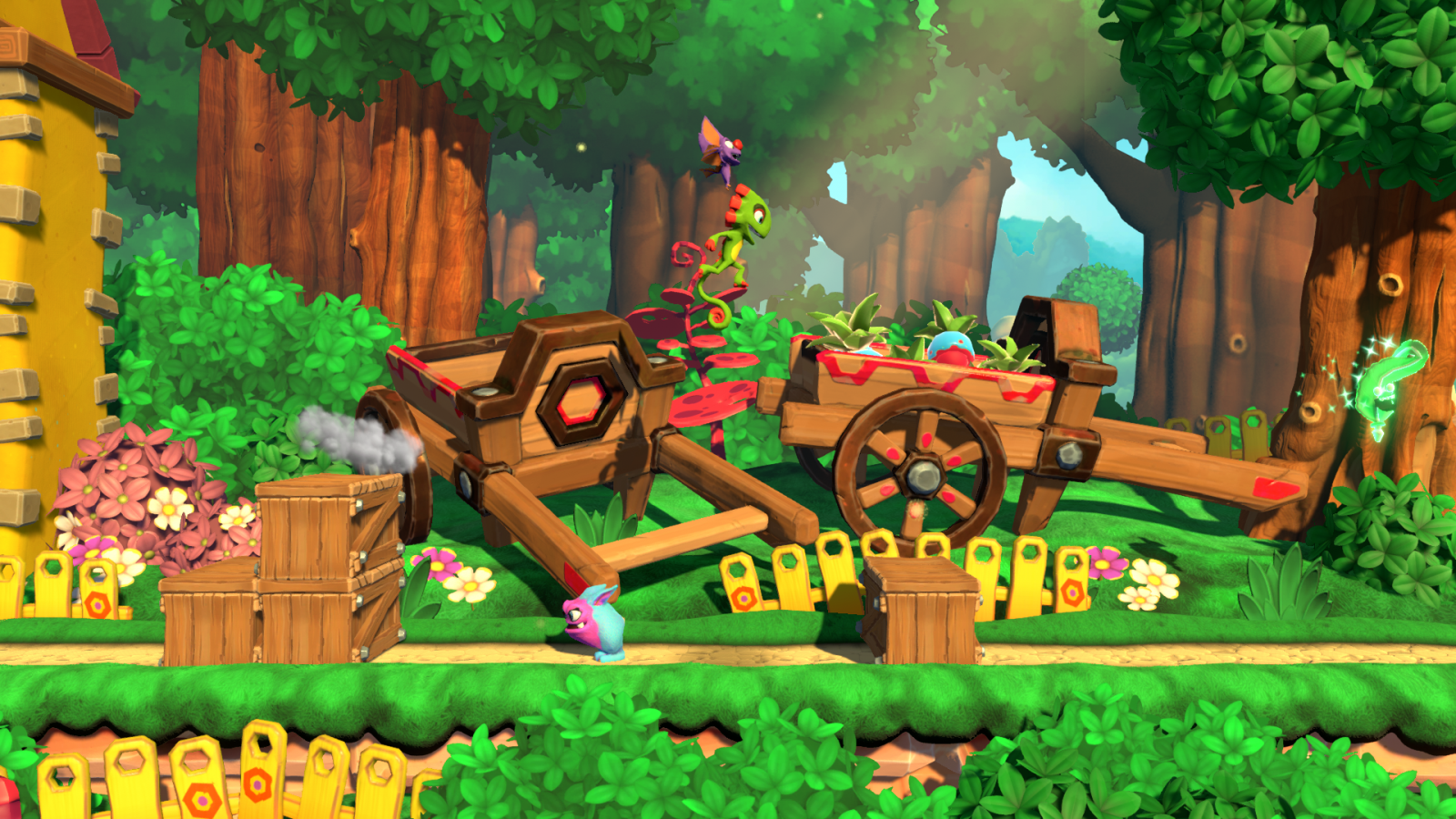 The story is simple. After his defeat in the first game, Capital B decided to build a new lair in the Bee Kingdom to challenge Yooka and Laylee. In retaliation, Queen Phoebee is building up a Beetallion to take him out. However, many of these bees must be freed by Yooka and Laylee before they can do any sort of heroic deeds.

In the main levels, Yooka and Laylee are paired together, much like the original game, and have several moves such as a ground pound, the ability to roll, briefly hover after rolling off an edge, and a mid-air slap. However, one hit and Laylee flies away from Yooka, bouncing along the walls briefly. This means that Yooka is not only one hit from dying, but his moveset has been cut in half until he either grabs her before she disappears, or finds a bell to summon her. 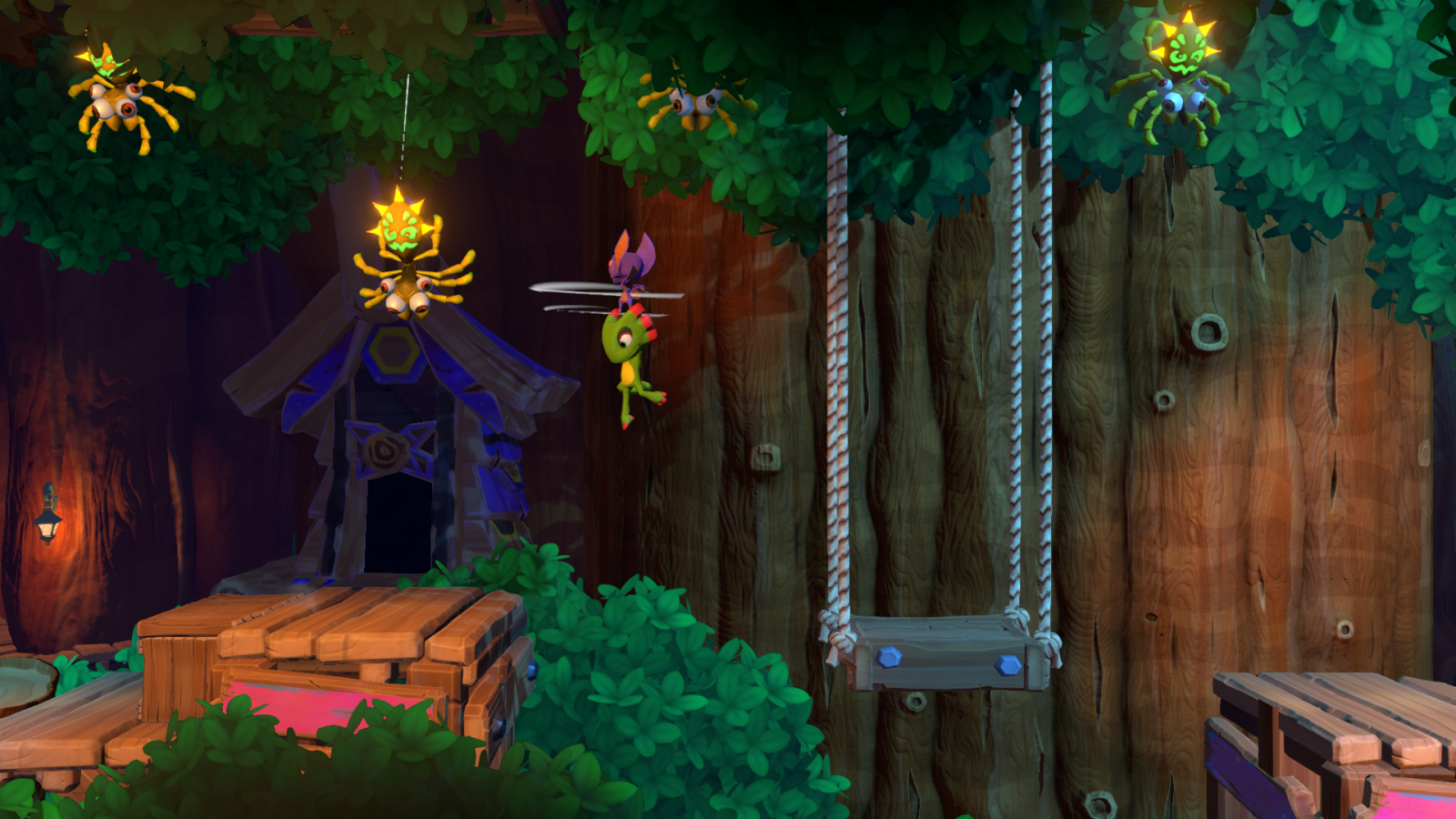 The gameplay itself is incredibly smooth. It ran at 60fps from what I played and the moves could easily be chained together to pull off moves you’d only see in platformers such as Donkey Kong Country: Tropical Freeze and Rayman Legends.

There were several nooks and crannies to explore in the level, which often rewarded me with flowers or one of the five rare coins that are found in each level. In addition, there are ghost writer feathers that will shower you with feathers in different manners. For example, one would shower feathers in a dangerous place while another would have the feathers follow them. 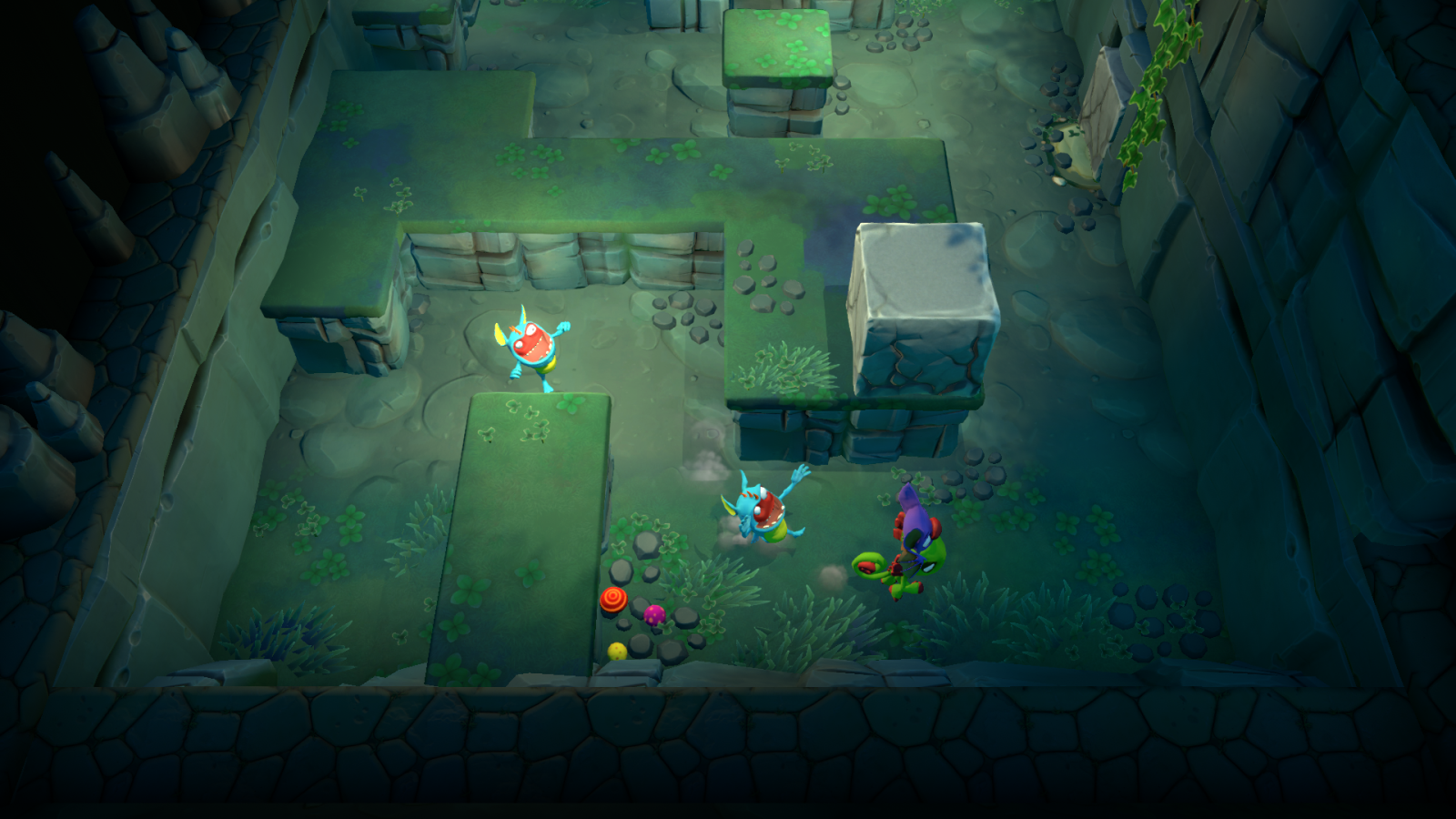 What I didn’t see in the demo is really what makes me excited for this game. The plot is simple, Capital B has built himself another lair and called it the Impossible Lair and challenges Yooka and Laylee to get through it.

The ultimate goal is to beat this lair, and it’s actually going to be accessible from the beginning. It will contain enemies from every other area in the game and it will truly feel nearly impossible to get through. However, by beating a level, you will earn a bee soldier that’ll give you an additional hitpoint in the lair. 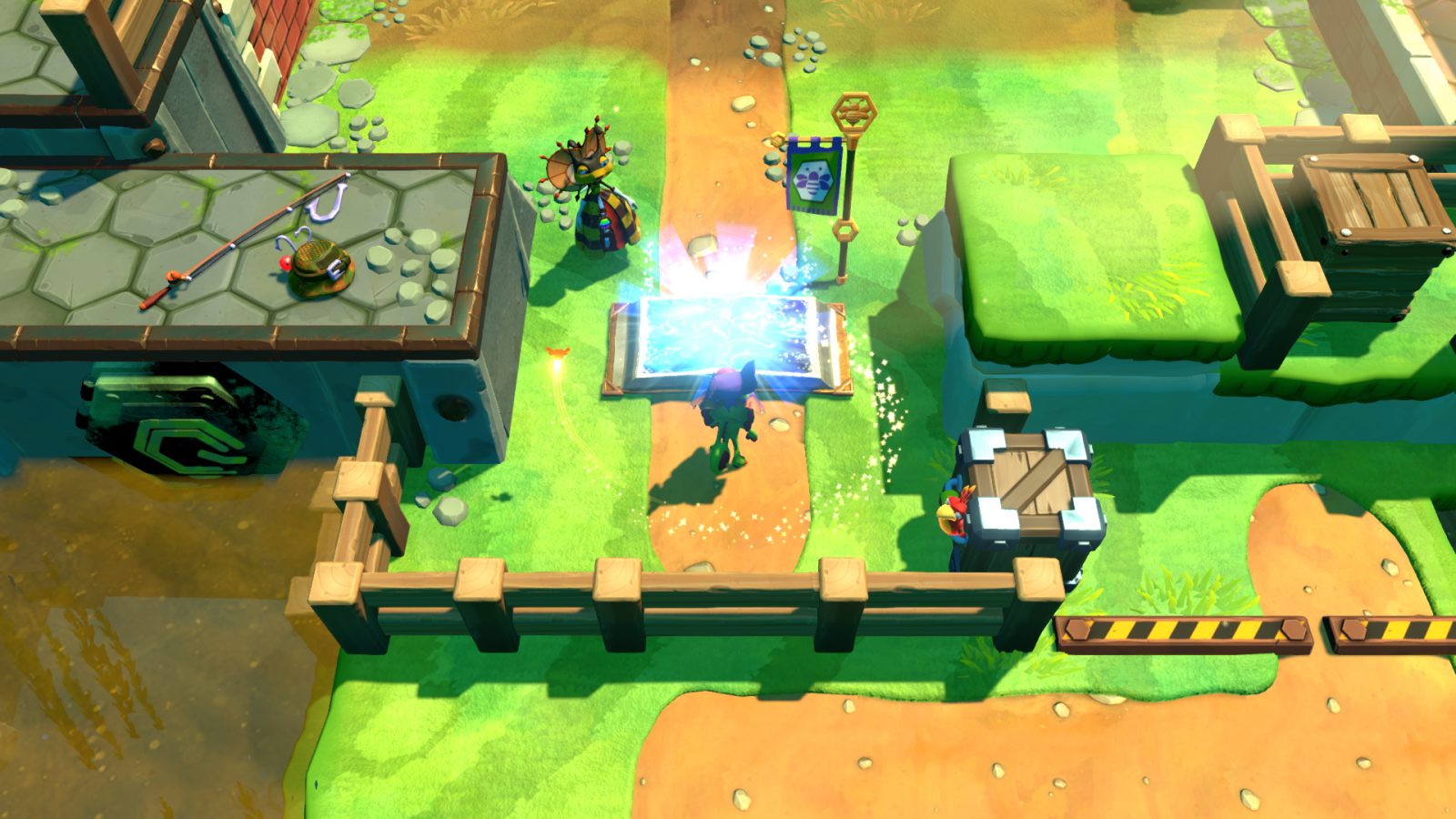 Additionally, the world map will have its own share of secrets. By completing secret objectives on the map, you’ll unlock an alternate version of each level, with their own coins and bee to save. However, we’ll have to wait to see how these alternate versions of levels look in action. Yooka-Laylee and the Impossible Lair will be released later this year on Xbox One, PlayStation 4, Nintendo Switch, and PC.