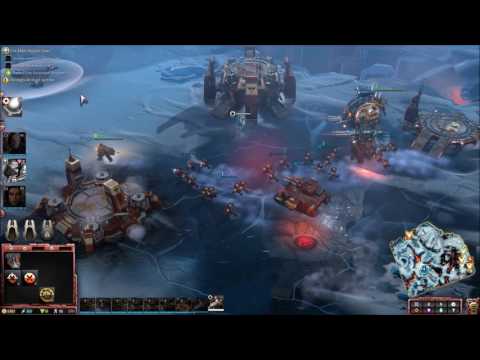 I’m a seasoned strategy gamer, or so I’d like to think. I’ve also been following and playing Warhammer 40,000 since I was 12 (I’m 30 now). When Dawn of War came out in 2004, I was beside myself with excitement. With the expansions installed, I beat the campaign twice each with the Space Marines, the Imperial Guard, the Necrons, and the Tau, not to mention countless skirmishes. I liked Dawn of War II, and I completed two playthroughs, but it was much less of a traditional RTS and felt more like a science fiction Company of Heroes (another Relic title). I have always hoped to see the franchise recreate the success of the original.

Fast forward to Sunday morning during PAX West 2016. I’m exhausted from two straight days of madness, with more still to come. Then it (ahem) dawns on me and I’m absolutely pumped: today is the day I finally get my hands-on with Warhammer 40,000: Dawn of War III. I arrive at the SEGA booth at the appointed time, and in short order, I’m face-to-face with 12 years of built up fanboy anticipation. Needless to say, a great deal has been leading up to this moment.

A weapon of terrible power has been uncovered on a planet called Acheron. The Space Marines, the Eldar, and the Orks shall face off once again over control of the world and the weapon contained within. Familiar forces will be led by familiar faces. Gabriel Angelos, Chapter Master of the Blood Ravens Space Marines, returns at the helm of the Emperor’s finest warriors, steadfast, fearless, and uncompromising in their defense of the Imperium of Man. The powerful Farseer Macha is back to lead the mysterious and manipulative Eldar into the future. And then there are the Orks, the brutish, warlike, and frenzied (and hilarious) Greenskin menace that gleefully follow the notorious Warlord Gorgutz, as they pillage their way across the galaxy.

Ben Boudreau, communications manager for Relic Entertainment, asked me if I’d ever played a Dawn of War game before. Emphatically, I answered in the affirmative, certain of my strategic acumen. Perhaps sensing my eagerness and overconfidence, Boudreau set me off with nothing more than a brief explanation of my mission’s parameters. I’d be commanding the Blood Ravens against the strange and cunning Eldar during the later stages of the campaign.

Initially, I was a tad overwhelmed coming into such a late-stage mission relatively unprepared, but I quickly felt right at home. Dawn of War III felt wonderfully reminiscent of the original, but had hints of the sequel from 2009 in its DNA as well. I was blown away.

Just as in the original, requisition and power are generated through the use of control points dotted around each map, and your base must be protected and upgraded. Forget these basics and you’ll be lucky to last more than a few minutes. The return of these mechanics will, no doubt, cause plenty of excitement amongst fans who are more in favor of the traditional style of the first game (me included).

“From Dawn of War I we’re bringing forward the base building, which we got rid of for DoW II. But it really allowed people to build massive armies and wage war against other people’s massive armies, and that was really important to us for DoW III,” added Mastretta.

Once my economy seemed robust enough, I amassed a sizeable force of scouts, tactical marines, assault marines, Dreadnaughts and tanks. But I had more than just regular troops. Super units, as Mastretta called them, like Lady Solaria’s Imperial Knight, will play a prominent role in battle, able to both dish out and soak up terrible amounts of punishment. Heroes like Gabriel Angelos, for instance, are going to be more impactful as well. “From DoW II we’re bringing forward the heroes, so heroes have very unique abilities and very unique roles to fulfill on the battlefield,” said Mastretta. And, as she also pointed out, the heroes in Dawn of War II felt a little too separate from the rest of the units, which is something Relic wants to avoid this time around.

It took me two or three attacks to learn how best to utilize my Imperial Knight and Gabriel Angelos, the Space Marine leader. I hadn’t been taking full advantage of their abilities which, when used correctly, are decisive and destructive, but I also hadn’t been doing a good job of safeguarding them. Angelos fell in battle early on (he does come back after a long cool down, thankfully) and I nearly lost Lady Solaria as well. Clearly, I had either underestimated this game or overestimated my skill, or both.

What I noticed is that Dawn of War III requires more careful management, not just of heroes and super units, but all units. Ranged specialists need to stay at range, and melee units need to get up close and personal very quickly, but few of them will survive without support. These distinctions were present in both previous titles, but they seemed far more pronounced in Dawn of War III. Once I’d learned to properly balance my army’s strengths and how best to exploit the weaknesses of my Eldar foes, the tide turned. I started steamrolling around the map, eliminating enemy bases and preventing further recruitment.

Lady Solaria, contained within her ominous, bipedal Imperial Knight, easily laid waste to swathes of enemies. Gabriel Angelos bludgeoned and blasted his way through the Eldar, supported by streams of fire from my tactical marines and missile barrages from my Whirlwind tanks. In the end, my demo stopped just short of victory, an unfortunate result of my surprisingly rocky start.

Whether you’re a fan of the series and the lore, an avid RTS gamer, or someone who’s completely new to all of this, it really doesn’t matter. Relic has absolutely nailed battles, the visuals, and the very essence of Warhammer 40,000. Destruction has never looked so good. Dawn of War III is going back to its roots and, if you ask me, that’s exactly where it belongs.

Dawn of War III has no official release date, but Relic estimates it will launch in 2017.