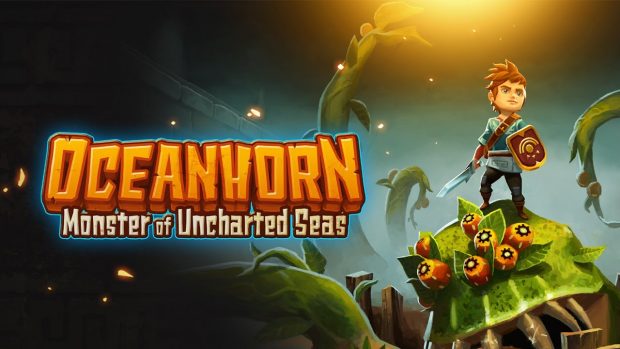 Oceanhorn – Monster of Uncharted Seas is the type of game that so closely resembles another that you’d be excused for thinking it’s just a cheap knockoff. Borrowing the same look, feel and structure of old 2D Legend of Zelda games, Oceanhorn doesn’t hesitate in the slightest to follow the formula of Nintendo’s adventure series. Thankfully though, Oceanhorn feels far more respectful than it seems on the surface, paying homage to The Legend of Zelda rather than outright copying it. Oceanhorn – Monster of Uncharted Seas feels a little too familiar at times, but the game manages to capture the Zelda spirit so well that it still delivers a compelling old-school adventure.

The plot follows a silent protagonist who sets out in search of his adventurer father and to defeat Oceanhorn, a monster that plagues the seas. The hero’s journey tasks him with traveling from one island to the next, fighting monsters, acquiring items and solving puzzles. Even the visual style, which features an angled, top-down view of the bright and colorful scenery, feels reminiscent of past Zelda games, giving Oceanhorn a Wind Waker meets A Link to the Past vibe.

Oceanhorn’s greatest accomplishment, though, is in how well it parallels The Legend of Zelda without ever feeling like it’s ripping it off. Oceanhorn features dozens of gameplay elements that Zelda fans should feel accustomed to. Puzzles that are based on moving weights onto switches, side quests that reward you with life-extending heart pieces, and pots that can be picked up and smashed are just a few of the many facets that Oceanhorn borrows from Zelda. But while all of these things are seemingly lifted from Nintendo’s series, Oceanhorn embraces them unashamedly. It never tries to obscure the fact that it feels like Zelda; it lovingly embraces how well the Zelda formula works and manages to excellently reproduce its same sense of adventure.

That’s not to say that Oceanhorn doesn’t occasionally stumble over its devotion, though. While most of the experience is faithfully reimagined beat-for-beat, Oceanhorn feels like it sticks a little too close to the formula for its own good. There’s no sense of uniqueness in Oceanhorn, instead feeling complacent to stick to the playbook. This ranges from the strikingly similar appearance of creature species to the inclusion of only the most basic dungeon items, like bombs and arrows. Oceanhorn could have been an opportunity for the developers at Cornfox & Bros. to add their own sense of identity to the genre, but instead it seems like they were too focused on sticking to the same procedure without ever veering off the beaten path.

As a port of a 2014 mobile game, Oceanhorn plays astonishingly well in its transition to consoles. Moving the hero using a controller’s thumbstick feels like a far more intuitive input method than playing on a cell phone could, and having physical buttons to help attack and block during swordfights makes me wonder how Oceanhorn’s combat could have ever played out previously. Similarly, the ability to map items and magical spells to face buttons makes for a familiar control scheme, while quick-cycling through my inventory using the D-pad is a godsend for helping to keep the momentum of the game going. Oceanhorn feels like a game that is far more suited for consoles and it works so well that it’s amazing to think of playing it without a controller.

However, there are still a few areas where Oceanhorn’s mobile origins are apparent, to the game’s detriment, mainly in regards to its camera controls. When controlling the hero on land, the camera is locked to a particular angle; moving the right thumbstick only peeks the camera slightly without ever rotating it. The game is crafted in such a way that rotating a camera isn’t necessary, but there were admittedly a few times where I wish I could have moved the camera from its locked position for the sake of visible comfort.

This camera behavior functions conversely when traveling across the sea. In the hero’s boat, you have full 360 degree camera control using either thumbstick, but no ability to move the ship on your own. Moving to another island is done entirely through selecting a location on the world map, without any actual steering, creating an overworld that is essentially nothing more than an on-rails journey with the occasional landmark. Oceanhorn’s game structure was not built with open exploration in mind, leaving its exclusion as only a minor loss, but it does stifle that element of self-driven adventure that The Legend of Zelda: Wind Waker excelled at.

Accompanying Oceanhorn’s engrossing gameplay is a stellar soundtrack. Featuring a musical score composed by Nobuo Uematsu (Final Fantasy) and Kenji Ito (Romancing SaGa), Oceanhorn boasts some impressive mood-setting tunes. The soundtrack mostly feels light and somber, helping to bring a serene quality to the game’s vistas and villages. And much like Zelda, there’s a certain thrill to the adventurous music accompanying Oceanhorn’s overworld. Overall a more soothing collection of music, Oceanhorn’s soundtrack works wonderfully for this type of game.

Oceanhorn – Monster of Uncharted Seas is a solid adventure game with a love for gaming’s olden days. Undeniably built around the same framework as The Legend of Zelda, Oceanhorn reproduces the core tenets of Link’s adventures while seemingly showing respect for them as well. There are certainly instances where Oceanhorn feels a little too samey, but it captures the essence of Zelda so well that it is still a thrilling journey. Oceanhorn hardly ever feels original, but its great inspiration makes the experience worthwhile.

Oceanhorn is unashamedly a Legend of Zelda clone, but feels more like an homage than a copycat. There are few original ideas, but old-school adventure game fans should love Oceanhorn’s bite-sized interpretation of Zelda’s classic formula.

Gaming Trend's resident amiibo collector, Matt's a lifelong gamer with a soft spot for Nintendo. As a new father, Matt often struggles to stay as involved as he has been in years past but can always be counted on to come back for some engaging geeky conversations. A resident of Philadelphia, he is currently working on building up his Man Cave with all things Marvel, Star Wars, and Video Games. As an old-school gamer, Matt firmly stands by his belief that gameplay will always be more appealing than story.
Related Articles: Oceanhorn - Monster of Uncharted Seas
Share
Tweet
Share
Submit