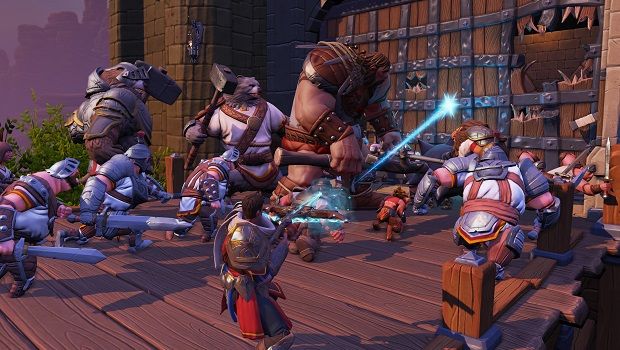 It’s been awhile since Orcs Must Die! Unchained went into Open Beta on PC, but last week at PlayStation Experience, we finally got to see how the game is shaping up on PS4.

For the uninitiated, Orcs Must Die! Unchained (OMDU) is an action/tower defense hybrid that tasks players with setting up traps and defending a fortress against waves of ghastly orcs. The game supports co-op, so after a brief tutorial, I sat down with two other players to defend my castle base.

There are different characters to choose from in OMDU, and I while I was tempted to play as the savage, wolf-like Blackpaw, I settled for Gabriella, the sorceress. The goal of each match is to prevent waves of orcs from entering your portal, and to accomplish that, you’ll have to quickly to setup traps and barricades before and after each round. Traps can be combined to create devastating combos; for example, you can place tar pits on the ground that slow oncoming enemies followed by arrow traps on adjacent walls, or you can place barricades that funnel enemies into well-placed spike traps. Defeating enemies with combo attacks fills your Unchained Meter, and when activated, your character receives increased damage, health and mana regeneration that work wonders in mowing down the baddies.

To be successful, you’ll also have to leverage each character’s unique abilities while simultaneously paying attention to their cooldowns. Gabrielle, for instance, has a spell that entrances nearby enemies, causing them to stop in their tracks, and another spell lets her teleport away from enemy mobs. Blackpaw, on the other hand, has a nifty ability that lets him summon friendly gnolls (creatures like him) to fight at his side for a time.

The game looked and played well on PS4, although there were a few times where I felt overwhelmed trying to remember certain button assignments. This might be because I only spent 20 minutes or so with the game, but otherwise, OMDU felt right at home with the DualShock 4 controller.

If you’re on PC, you can download the Open Beta for free now. OMDU will launch on PS4 sometime in 2017.