Infinity Ward takes Call of Duty back to its roots, ditching character-shooter oriented gameplay and futuristic settings in favor of grounded realism. The environments, character models, guns, and scenery are all modeled after and inspired by real world conflicts and help contribute to the gritty atmosphere that the Modern Warfare series is known for. Following suit of the likes of Battlefield and other shooters, Infinity Ward promises a free of charge season pass and a “complete game at launch”, ending the days of limiting maps behind a paywall. For the first time in Call of Duty history, Modern Warfare will feature crossplay between Xbox One, PS4, and PC, uniting the player base as one. I got hands on early access to the multiplayer gameplay on PS4, as well as interviewed studio art director Joel Emsley and audio director Steven Miller about what is the bread and butter of Modern Warfare. 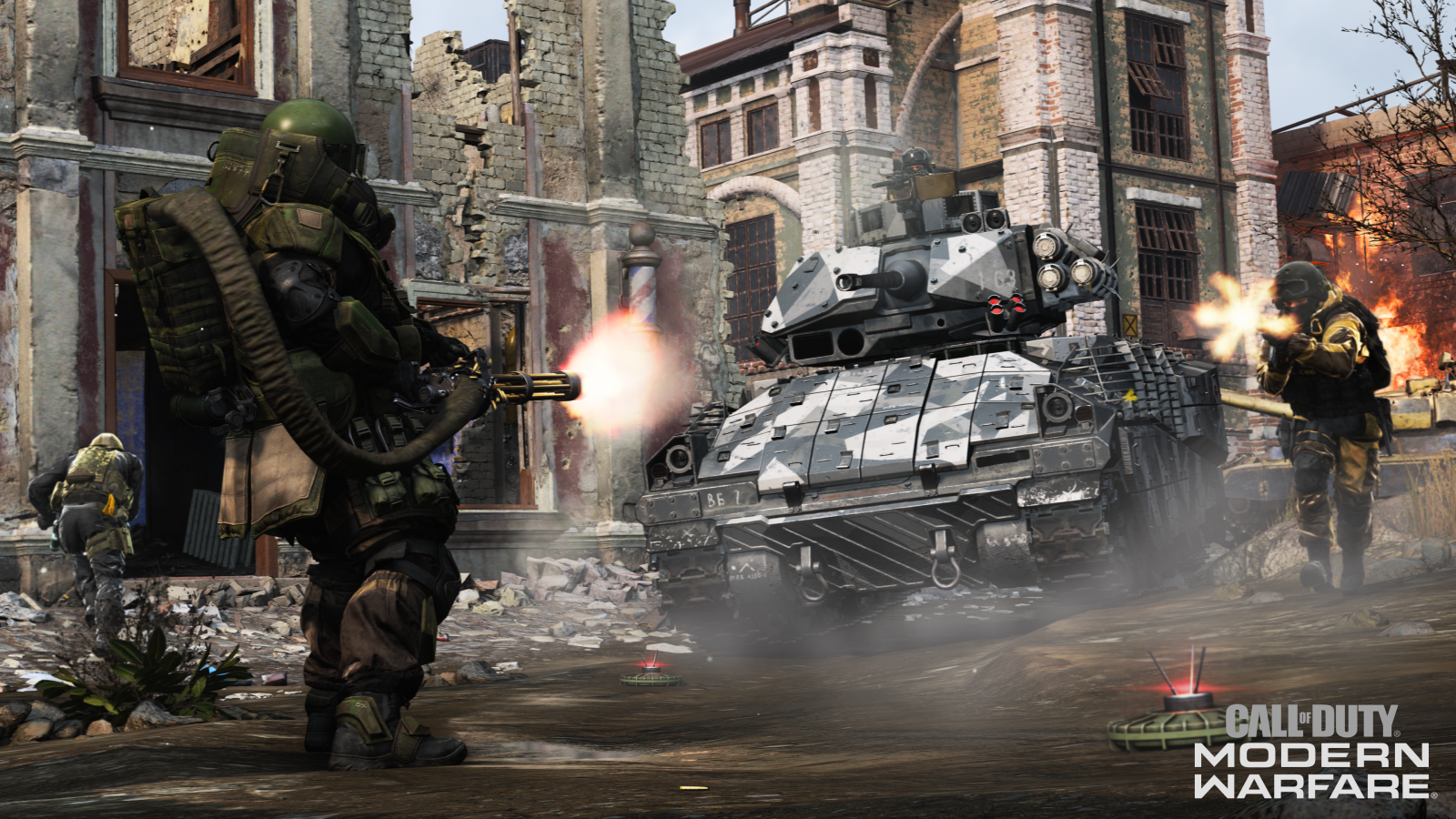 The true stars of the show are the firearms, and Infinity Ward did not pull any punches when it came to Gunsmith, the gun personalization available when creating a class. Options include series staples such as weapon camos, grips, sights, extended magazines, gun barrels, and so forth. Choices felt more legitimate, less restrictive, and with more variety this time around. A customized AK-47 with enhanced grip and a reticle scope was my go-to weapon of choice, and felt as powerful as it was unique and personal. Gunplay is even more authentic in this title, there is  weapon kickback and flinching when firing your gun and your soldier’s firearm lowers and bobs as they run, reminding players that sprinting means a slight delay between aiming down your weapon’s sights. 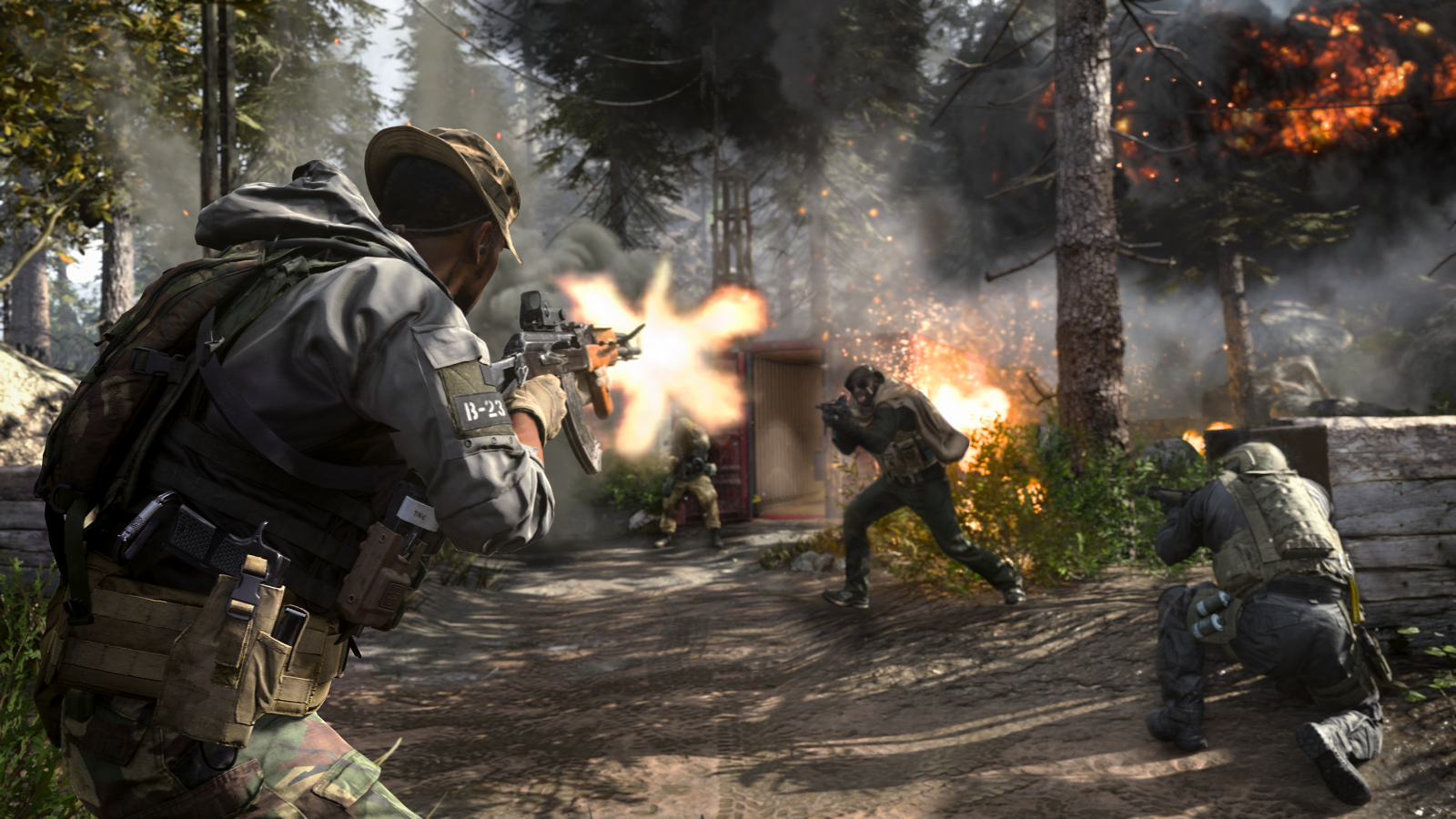 The sound design was one of Infinity Ward’s shining moments, and I talked to Steven Miller about the intricate details that were taken into account. Sound travels differently in cave gunfights than it does in a desert plain and Miller contends, “We do interesting things when we go and record, we blend analog frequencies into our digital recorders to get this rich sound captured.” Real gunshots were recorded in designing the sounds for the sandbox’s firearms, each weapon reflects he hyper lethal beast it should. Additionally, a mounting system was added to the game allowing players to steady their aim by leaning against corridors, or by fixing their weapon into a stationary position on the battlefield; this feature is most useful when returning covering fire. Kill streaks reclaim their former mantle in Modern Warfare as opposed to score streaks prominent in most recent titles. Instead of merely racking up points to gain special weaponized rewards, players must hold unto their precious lives and rack up kills in succession in order to deploy tools of devastation such as a UAV, Juggernaut combat suit, or even a nuclear warhead. These rewards favor strategic gameplay that makes or breaks the tide of the game, often resulting in total annihilation of the opposing team. 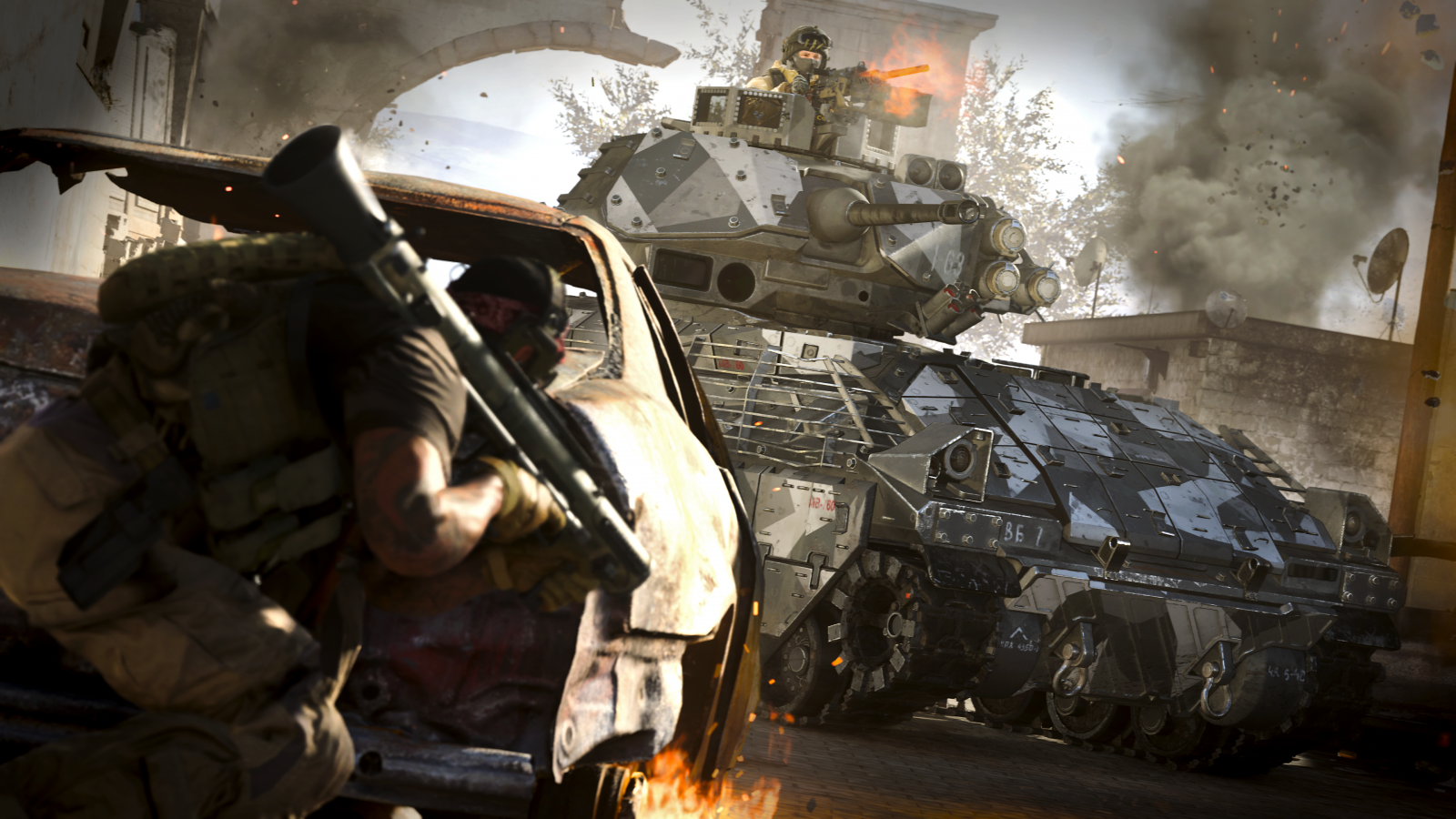 Map design ditches the standard three lane layout Call of Duty maps–as of late–have been notoriously known for, instead favoring map control almost akin to an arena shooter. Maps feel very organic, with many obstacles to traverse and clamber over, allowing players to forge their own path on the frontier. Many maps favor the high ground, encouraging players to take advantage of map control before the enemy team does. Smaller maps than fans are used to make an appearance in Modern Warfare, accommodating for Gunfight, a new two vs two round based team elimination game type where players are each given one life and a random loadout of weapons. The last team standing wins, with victory relying on the player’s twitch reflexes and adaptability to the random weapons that the game’s disposal. There is also twenty vs twenty player support available for larger maps, namely the grassland level Battlezone that was demoed on the show floor. Functioning ATV’s are positioned around the map, allowing players to navigate the large scale battle grounds faster. Doors on buildings offer some complex gameplay strategies that could give players the upper hand in a situation, or be downright mischievous. Doors are able to be opened and closed by the player, as well as sprinted into to be burst open, though much louder in doing so and could alert enemies.  Bombs can be set onto doors, depending on the type either forcibly opening the door, or to be left as a trap to an unfortunate player exiting a room. One map in particular that stood out to me was a battle ground set in the middle east, reminiscent to a spiritual successor to Modern Warfare 2’s Rust . This map is one of the few available that had two variants, one during the daytime, and one taking place in the night. 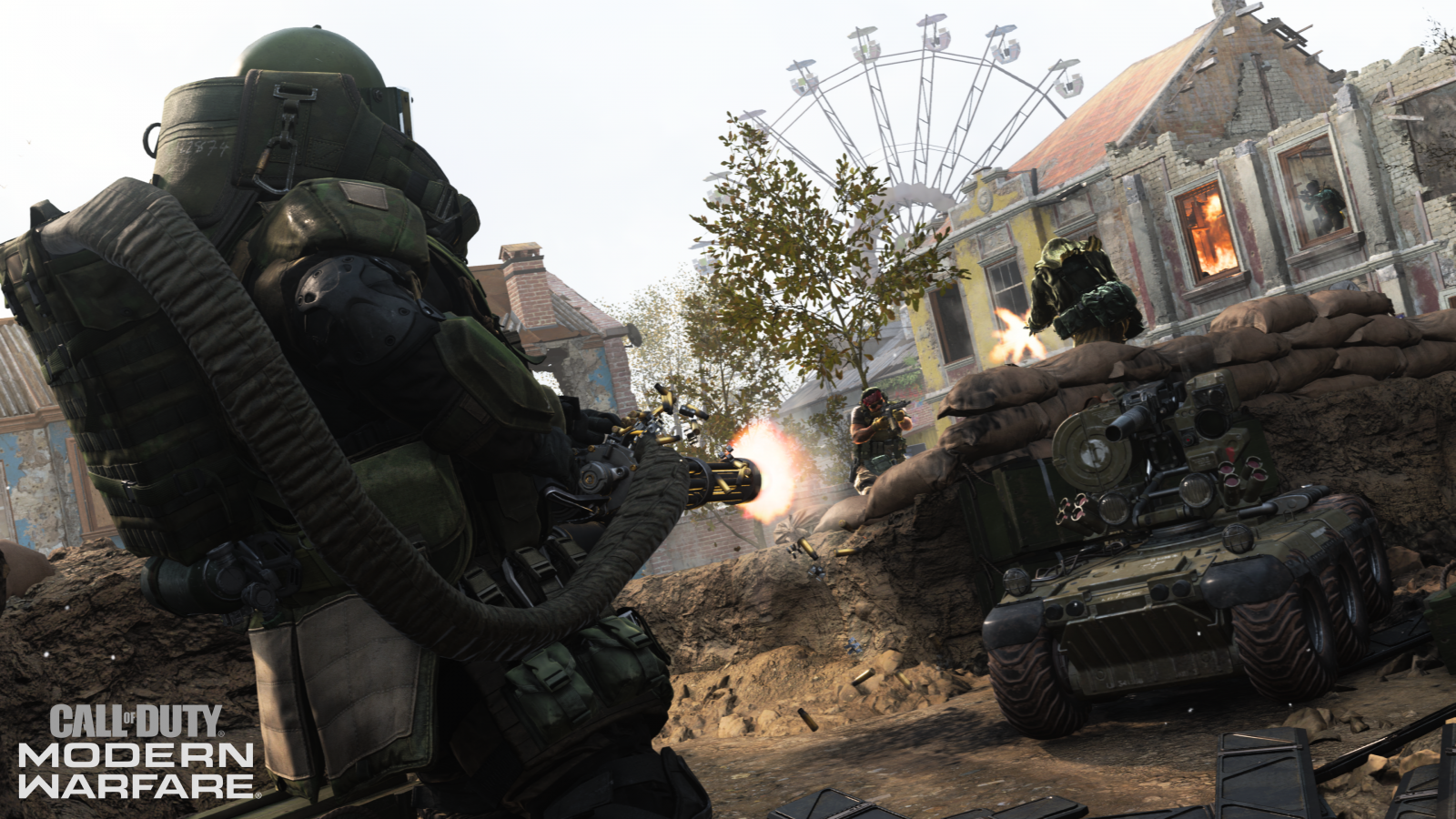 Night vision goggles in multiplayer make a return from the original Modern Warfare, but this time as a full-fledged experience that adds replay ability to the maps that support this feature. When night vision is equipped, players are unable to aim down the sights and a left trigger pull just slightly tilts the weapon instead, allowing players to rely on their firearm’s laser sight to aim. Night vision can be unequipped by a click of a button, but it is ill advised to traverse a dark area without it, even if it means aim down sight restrictions. The camouflage and outfits players adorn are akin to the map’s environmental factors, allowing players to blend in with their surroundings.  Character models and skins can be changed as well, allowing limited customization when compared to previous incarnations in the Call of Duty series, but the care and attention to detail on the soldiers is nothing to scoff at. Soldiers facial animations, body types, and gear all look shockingly life like, and in my discussion with Joel Emsley, he further elaborates upon that “We make crazy investments in scanning devices, reality capturing people and bringing them into these stylized looks. There’s this tangible thing, it’s believable and belongs exclusively in Modern Warfare.” The watch on your character’s wrist even tells time based on your console or PC’s clock, a more trivial detail, but further enhancing the immersive nature of the game nonetheless. 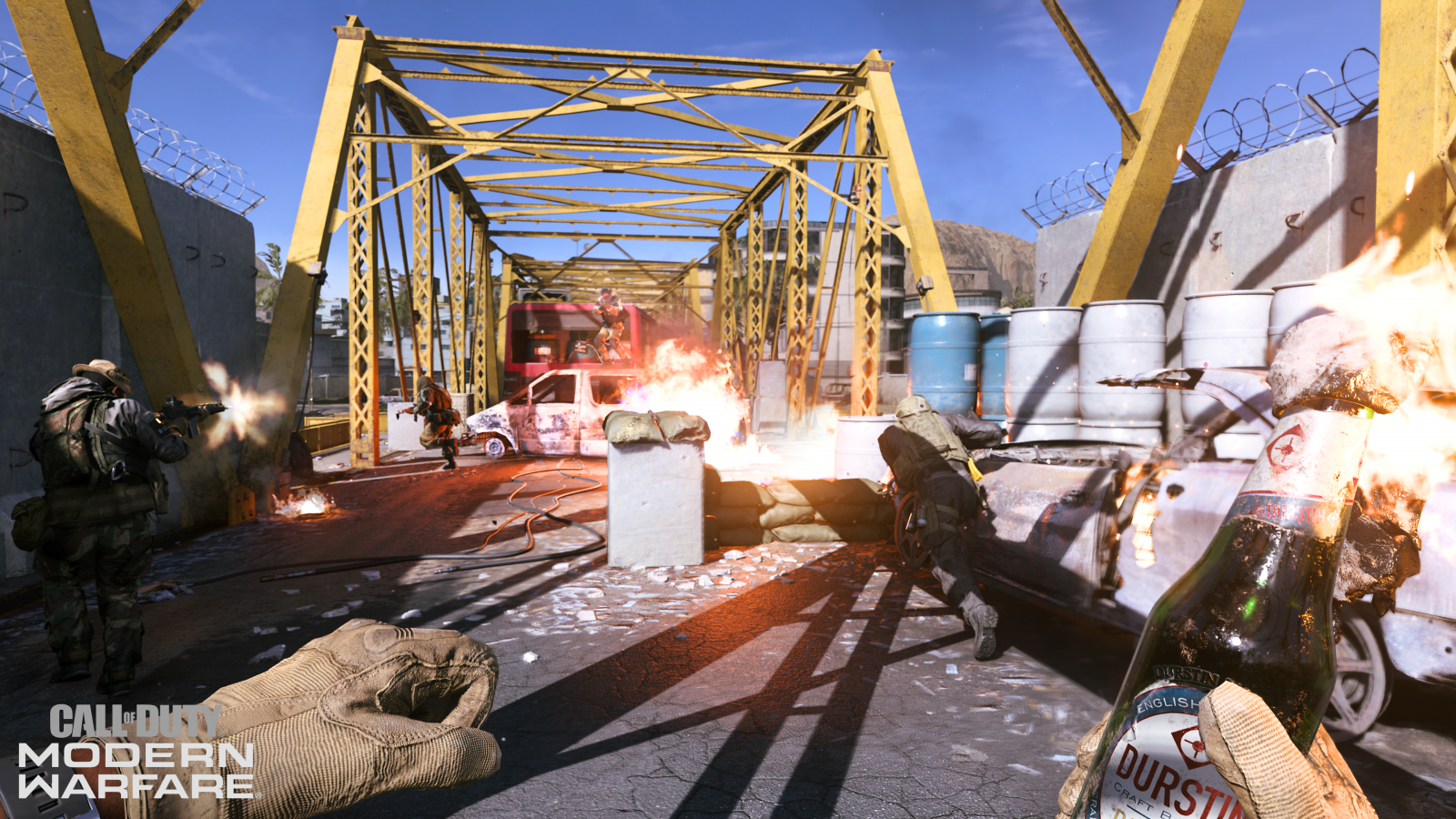 Modern Warfare aims to bring the series back to grizzly realism, and Infinity Ward’s efforts have not been in vain. The removal of specialists and putting players all on an even playing field resonated well with me, and showed the developers are listening to the vocal majority of fan feedback. The earth tone aesthetic and intricate sound design go hand in hand in giving players a premium interactive experience. Firefights are fluid and the attention to realism truly allows the player to feel like they’re stepping into the boots of a hardened combat veteran. 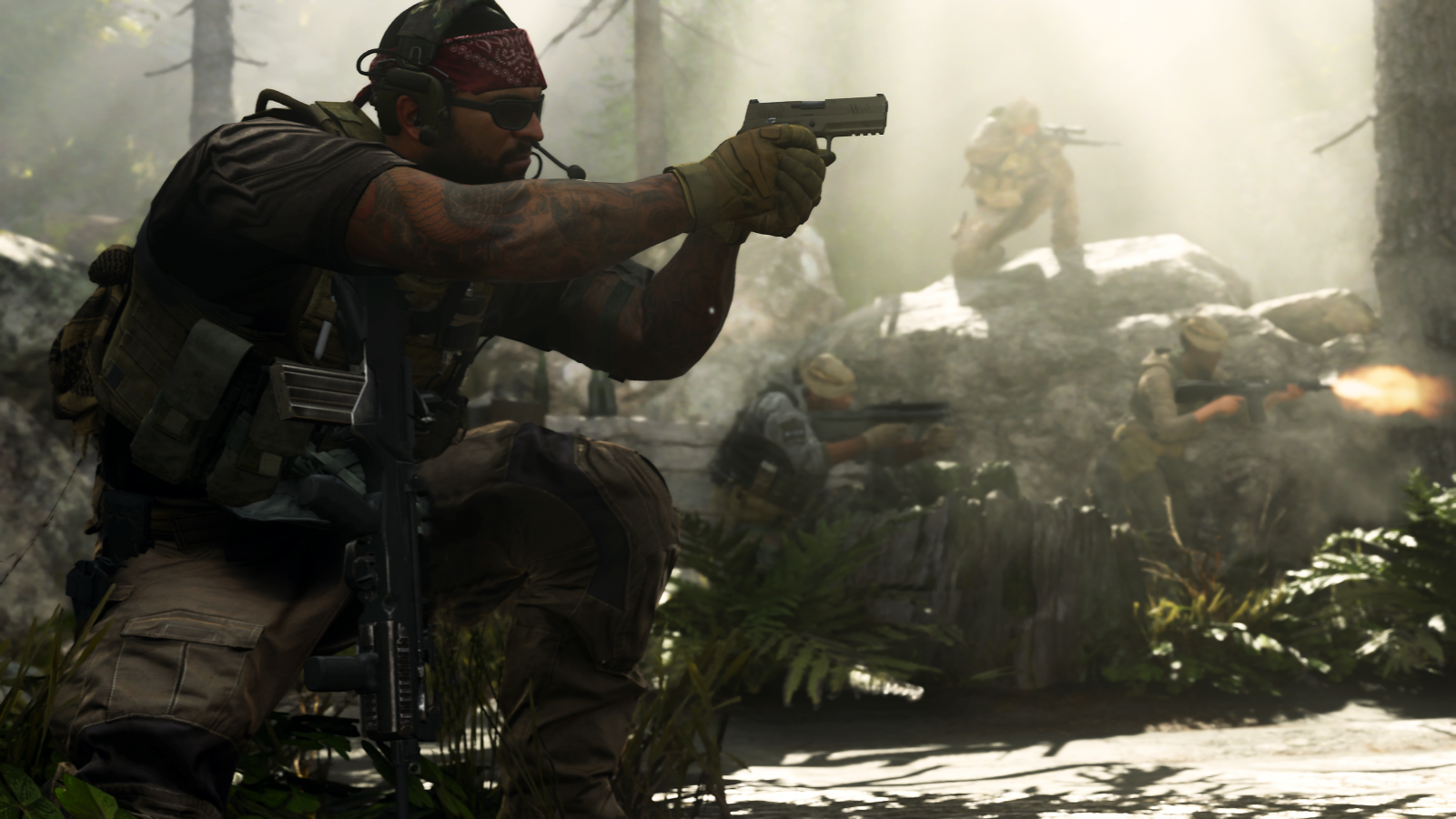