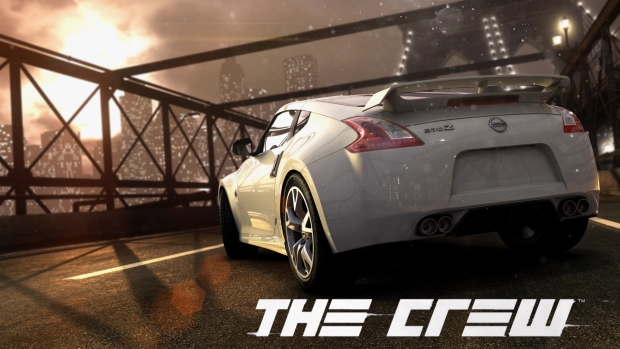 “Next-gen” implies several things, one that it is only available on the newest consoles being released. This is often where next-gen definition ends – historically new consoles have games that aren’t going to be pushing the new hardware as developers get comfortable programing for the platform. The “next-gen” that interests us, then, is when a game or technology leverages the new hardware that simply isn’t possible on the existing consoles, and pushes past our current expectations.

[singlepic id=14631 w=320 h=240 float=left]While the game was on display to the open showroom floor, it felt like getting into the private hands-on preview of The Crew was like making into some exclusive club. There were two people guarding the door, velvet ropes, and people scurrying around with clipboards and constantly re-checking who we were. The wait wasn’t too long (as I was on their clipboard lists), but having watched the videos on display I was anxious to get my driving gloves on their next-gen title. Below I’ve recounted my experience in playing the game, and have also included a video to give you a clean view of what The Crew represents directly from the mouth of Julian Gerighty, creative director, and why we’re excited to see what they have to offer.

When they figured out who was sitting where, we were first introduced to the controls and then shown the vehicle customization screen. I got to flip through a few custom cosmetic parts such as hoods with different scoops. Almost before I got a feel for it, we were put into a warmup event – in my case, I was playing solo in a downhill race on the edge of Las Vegas. The developer who was with me was explaining that they were getting some other people online and that we were just getting familiar with the controls. As soon as all four of us were up to speed, we were invited to a chase on a Miami beach. This is the same race that you see at the end of this video:

I found that while I did OK on the street I had an easier time chasing him on the beach. I got a few shots in, but ended up spinning out. To get back in the game, I cut over and used the adjacent road to box him in. I managed to force him to change direction, though I didn’t manage to get the final takedown it felt good to help the team take him down. It was too short, but man it was sweet, and I wanted more.

The Crew is being developed by Ivory Tower –  a group of veterans including talents from the Test Drive Unlimited(TDU) series- and it certainly shows. The online-only MMO aspect focuses on adding content and challenges, and the storyline itself was designed for single player but can be shared. As you level up you unlock more customizations and vehicles, and unlike other games which offer full destruction, the damage is cosmetic and allows Ubisoft to have licensed vehicles.[singlepic id=14635 w=320 h=240 float=right]

One of the things that The Crew shares with Test Drive Unlimited 2 is that wherever you are in the map, the closest people playing simultaneously will be in your game. You can simply ignore them, challenge them or even team up to complete quests and challenges. You can also find your friends anywhere in the game world – a map made up of the continental United States of America, including 15 major cities and covered entirely by passable terrain to truly go off-roading. According to the developer, a pavement-only drive in a street racer takes approximately two hours from New York to Los Angeles, and the cities themselves are larger than GTA’s Liberty City. Thankfully they aren’t forcing people to drive everywhere (let’s say you’re in Florida and your buddies are running a crew challenge in Las Vegas) you can fast travel right to them.

This was my first experience playing on the Xbox One controller, and it was both memorable and impressive. The controls were responsive and easy to pick up and play. Stay tuned to GT as we get closer to the release. We look forward to seeing you on The Crew as it arrives in early 2014 for PS4, Xbox One, and PC.