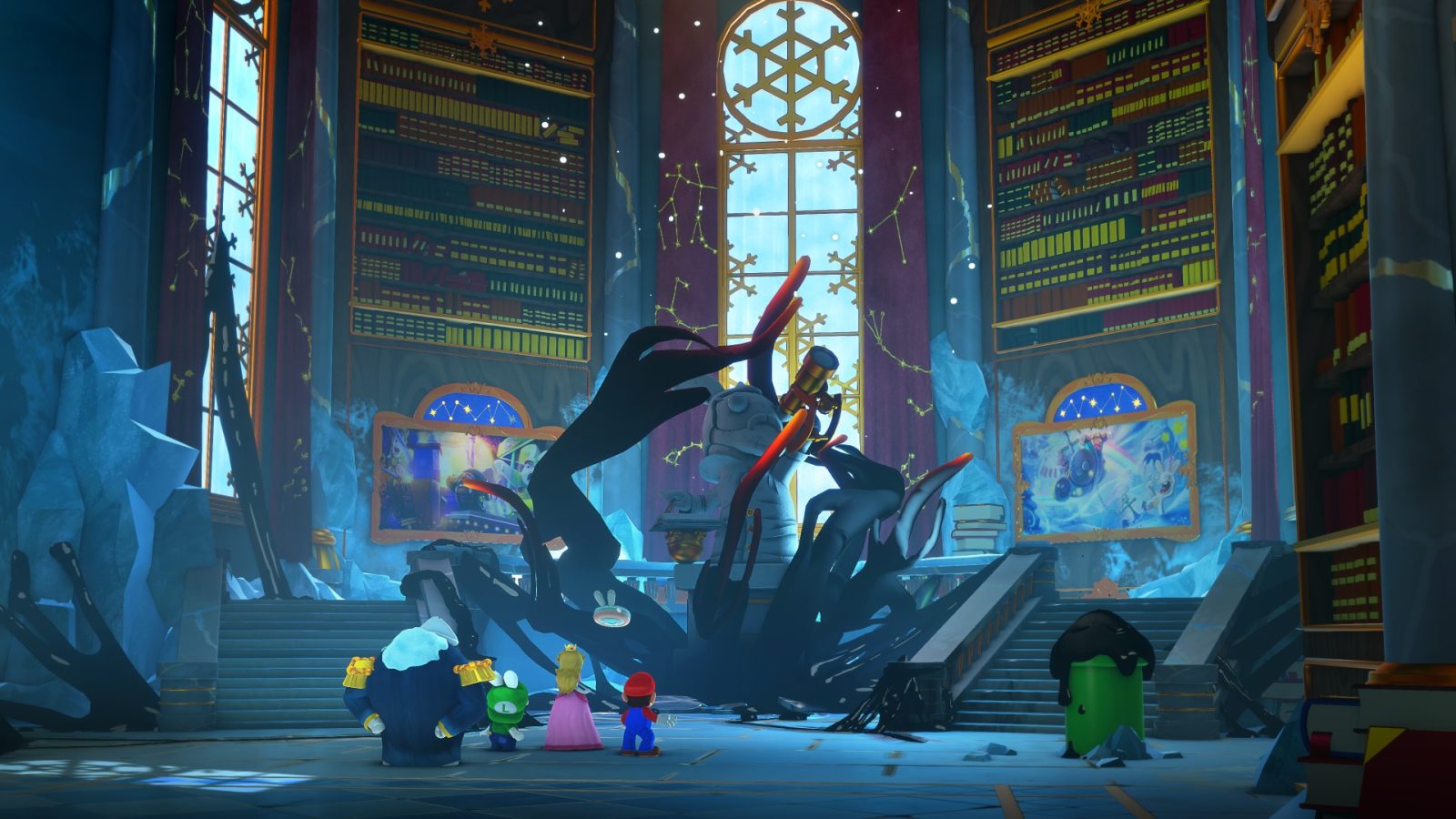 The original Mario + Rabbids: Kingdom Battle just surpassed 10 million players on the Switch, showing that sometimes the weird answer is a good answer. This strange crossover was clearly shown love by the developers, as Mario + Rabbids: Kingdom Battle was a great introduction to the tactical style genre to some, while still providing a challenge to those who are familiar with the genre. Now, after more than four years of work, Mario + Rabbids: Sparks of Hope is close to release. I had the honor to be invited by Ubisoft to attend an early preview of the game in San Francisco, CA. The amount of pride in this game is clear from their team; from the director to the developers to the PR team; everyone seemed to have a spark (of hope) while talking about Mario + Rabbids: Sparks of Hope. 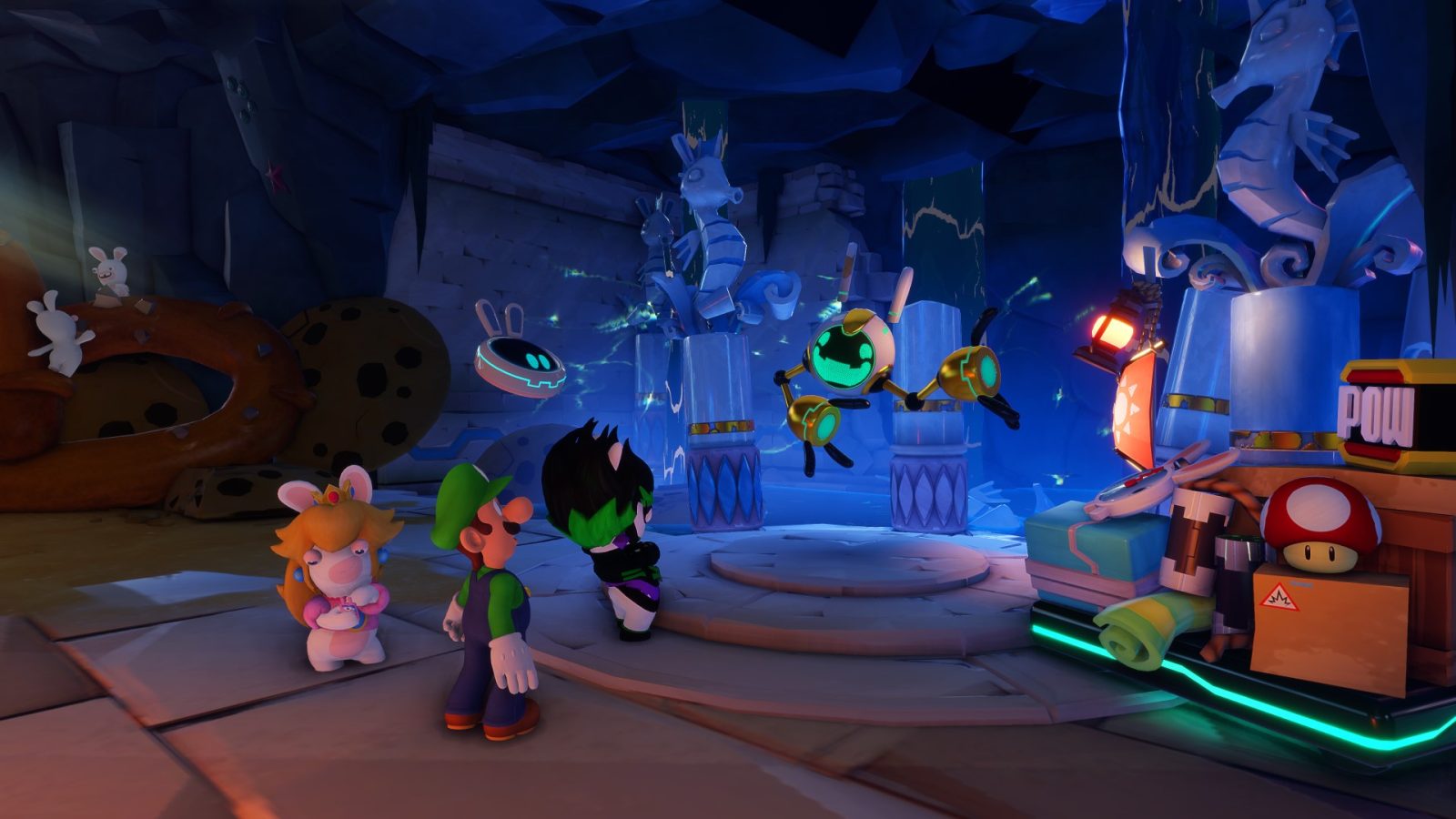 Their biggest selling point for Sparks of Hope are the “new tactical possibilities” throughout the game. This phrase was something I kept hearing over and over from all of the team members I was able to speak to during the event. Truly, they’re not wrong.

Sparks of Hope changes the normal tactical RPG genre by taking the grid away from movement. During your turn you have an area that is open to your characters. You can use many free actions before attacking, and in that free action part of your turn you can move about as you please in that area. These free actions include slide attacks, team jumps, throwing items, etc., while the actions that cost points are hero specials and attacks. This frees up so many ways to handle situations. For example, you can put down a ton of damage with the new character Edge, who we got to play with during our preview. Edge has an ability later in the game to allow for three-four slide attacks per turn. This just adds SO MUCH DAMAGE without even fully taking your turn. Another example is Mario. Mario has the ability to chain a team jump, stomp on an opponent, and then fire both of his blasters while in the air allowing him to get around cover of an enemy. These two examples are really just two of many ways of playing with these characters.

A slight change from the first game, once you fire your weapon the character cannot move. So be prepared in case you get caught out in the open. When I spoke to Quentin Correggi (Associate Producer) about the changes from the grid-system to a free movement system, he said, “I think, well, first of all, it all goes back to the first one. We release Mario + Rabbids: Kingdom Battle… We started to dig into what players really enjoyed in the game, and specifically the combat experience. What we realized is what the player really enjoyed, and what set us apart from other tactical games, were the amount of options you had during your movement phase… We knew that we needed to keep that as the core experience… And we knew we wanted to go even further.” This is such a core point to Sparks of Hope. You have so many options and “new tactical possibilities” while playing the game and you can truly play it the way you want to play it. 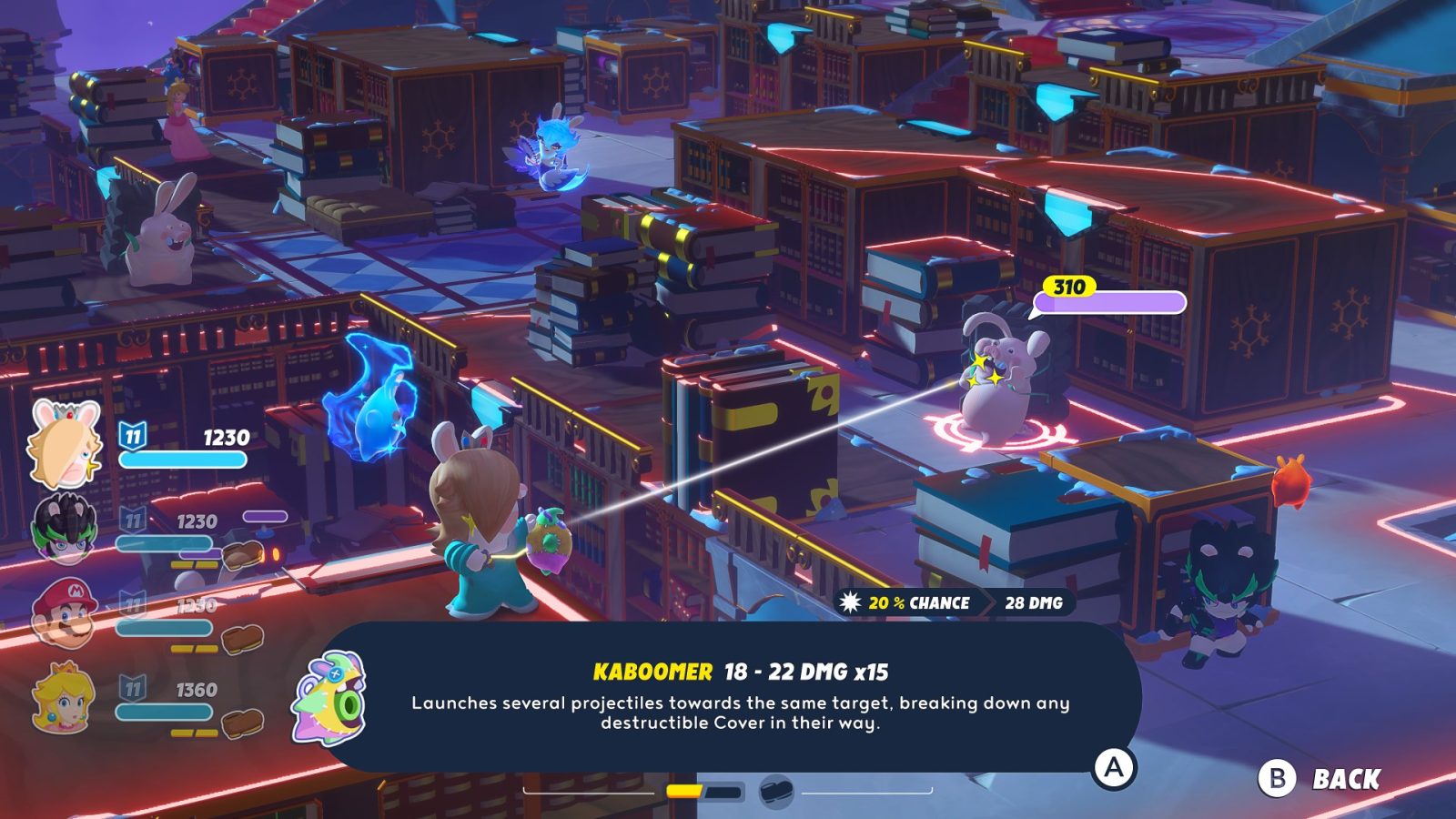 During our preview, we had access to Mario, Rabbid Peach, Edge (my top three I used for the preview), and then Rabbid Rosalina (new to Sparks of Hope), Luigi, Rabbid Luigi, Peach, and Rabbid Mario. On top of that, we have confirmation that Bowser is playable. From what I was told, he’ll be recruitable halfway through the game, allowing you time to play with the character before the endgame. The new characters in the game are really important to the team members I spoke to during the event. When speaking with Correggi, we discussed the new Rabbid characters that are unique to the game, some not having a Mario counterpart. “We knew we wanted some fresh and new faces because this is a new game and it was important to have new faces…,” he said. We discussed some of the new Mario-based characters; Bowser and Rabbid Rosalina, and then he said, “Finally, we have Edge… Her character design is also coming from the gameplay, we knew we wanted a Rabbid with a sword… We wanted a character that was very focused with the movements. But I cannot say too much without spoiling it.” As I’ve stated, Edge was my favorite character I played with during my time, and I can’t wait to see what she can do fully leveled up! When asked if the team had a favorite character, the response was a clear no. Everyone really seems to take turns liking characters and finding new combinations of characters for the team. This truly seems like a group who is so proud of the game as a whole, which is refreshing. 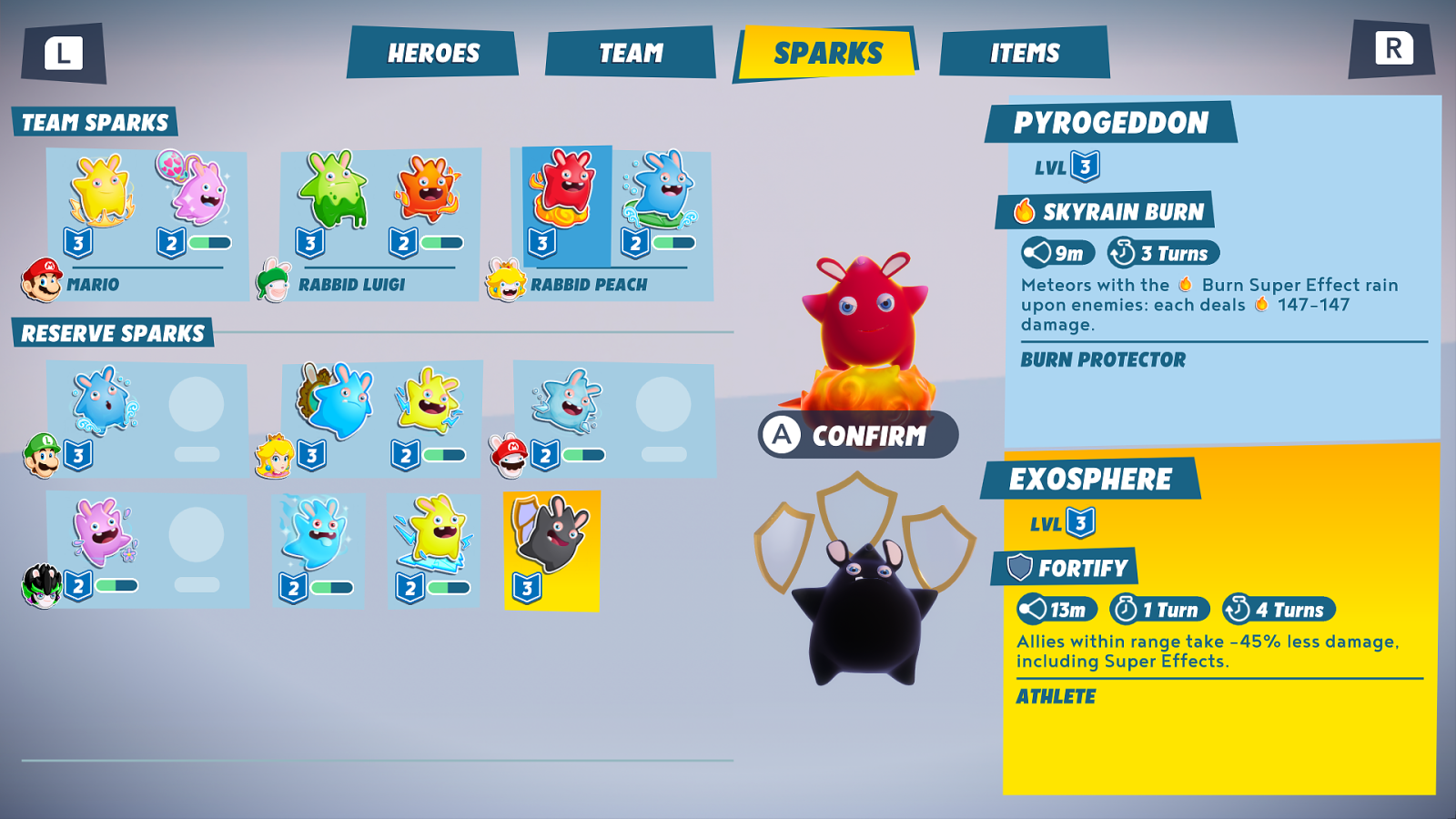 Another new addition are the Sparks. These are a combination, visually, of a Luma and a Rabbid (there’s a story to this, so I won’t go into details). These sparks replace the multiple weapons and specials for heroes from Kingdom Battle. Correggi told me in our interview, “Each weapon is completely unique now… they each have their specific behavior… but then, on top of that, we added the Sparks. The Sparks, for us, was really being able to give urgency to the player. Each Spark comes with an active power (unique) and passive bonus that can be offensive or defensive. And really, I think the Sparks, not correlated to the actual hero ability and archetype, really enables the player to, basically, create their own hero in a way.” The Sparks, from my preview, became a great way to add damage to each character, but also gain advantage because of the effective and resistant elemental types enemies have in this game. For instance, before our second session where we played in the second planet, my dev team member stopped me to share that I can add an electric Spark to be more effective against the enemies wearing the seahorse heads. Which leads me cleanly into my next point: scanning. You can use Beep-0 (your robot companion from Kingdom Battles) to scan the battlefield. Showing the strengths and weaknesses of your enemies. Meaning, you can scan enemies, find their weaknesses, and then get a group of Sparks to help you take less damage or cause more damage. Again, adding to the “new tactical opportunities” the team talked about. 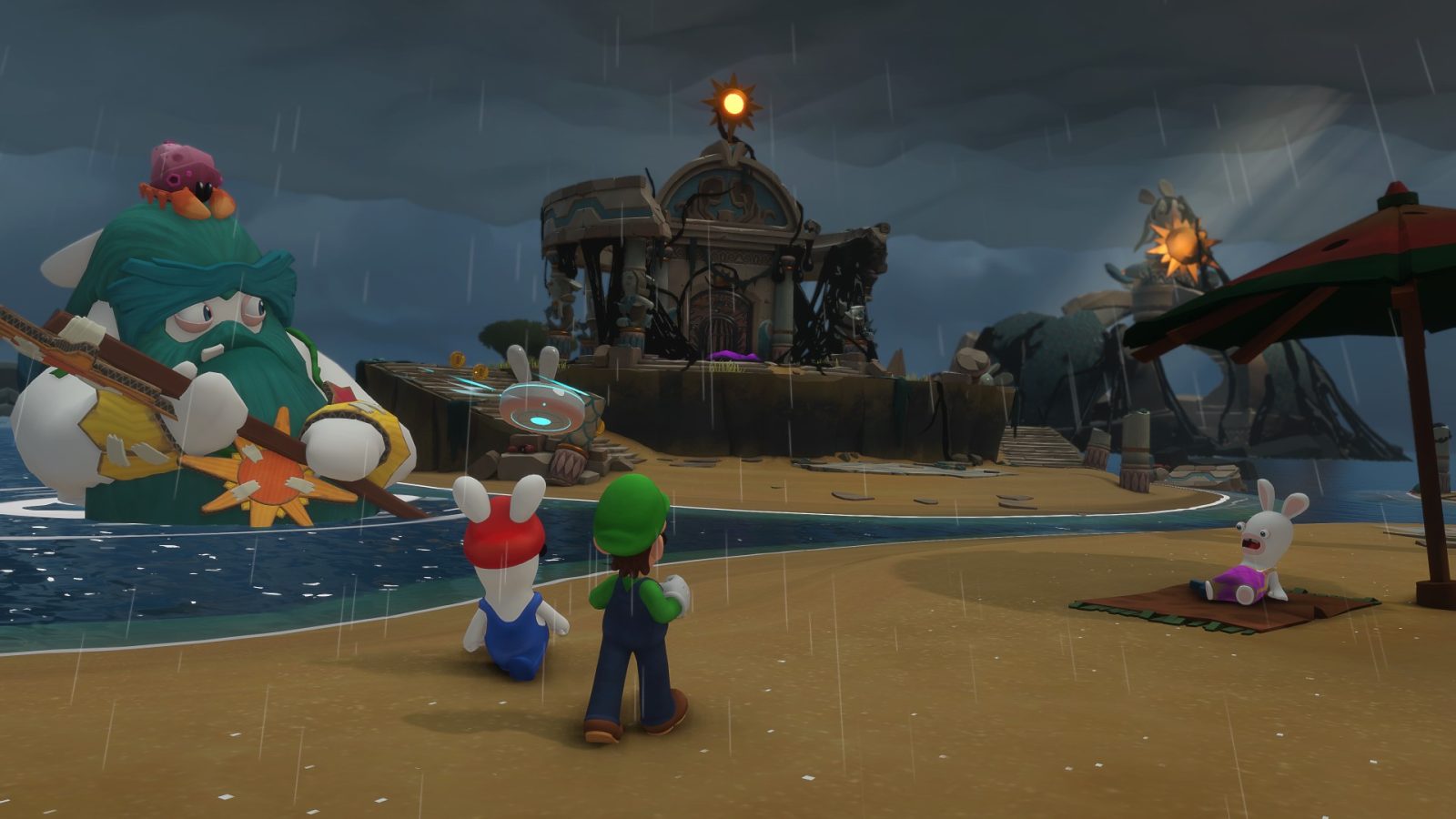 From a visual standpoint the version I played, which is an early version, was as good or better than Kingdom Battle already. I didn’t, personally, have any issues with frame rate drops or stuttering of any kind. I played my time in docked mode on a TV. Everything looked great, and considering it wasn’t in its final state, I’m excited to see what it fully brings when we get our hands on the full game.

My experience with Ubisoft and Mario + Rabbids: Sparks of Hope was such a sweet one. Everyone at the event truly seemed to love the game and what they’ve come up with for the player-base. The game looked and felt so good to play, I cannot wait to see what the full game has in store for us.

Mario + Rabbids Sparks of Hope will be released October 20th on the Nintendo Switch.