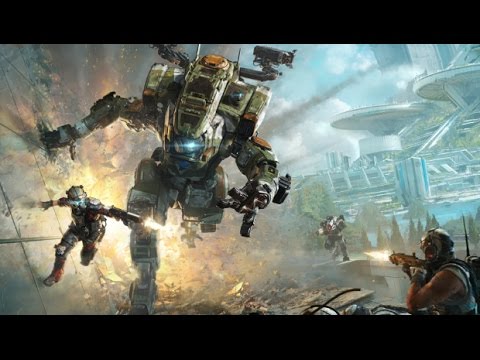 Titanfall 2 comes out this month, and its release falls smack in the middle of the two biggest annual titles of the industry. It’s a bold move by EA to stick to a release date so close to the mammoths that are Call of Duty and Battlefield (and slightly confusing, considering Battlefield 1 is also an EA published title). But judging by what I played during the tech test back in August, the game’s multiplayer can stand toe-to-toe with any modern shooter.

I only played about 12 hours of the first Titanfall’s multiplayer, but from what I remember, I had enjoyed the game’s balancing act between Titans and Pilots. It felt great being able to take on the goliath machines while on foot, and it felt even better to get in one myself. But the gameplay soon became too fast for me to keep up with as my rank increased, and I — like everyone else — craved a single-player experience.

In many ways, Titanfall 2 is the answer to all my grievances. A spongier health system, more open map design, and a more tactical approach to Titan takedowns all serve to slow down Titanfall’s volatile combat systems and add a welcome complexity to the mix. I took issue with some of the new modes’ systems, and the new open map design introduced a few new issues; but all in all I enjoyed my time with the pre alpha test and am now very excited to see what Respawn has planned for the final product.

The most evident and dynamic addition to Titanfall’s on-foot gameplay is the grappling hook. While I never felt that Titanfall was lacking in traversal abilities, the new equippable perk proved to add a new and unique element to Titanfall’s already exciting mobility. It wasn’t quite clear to me at first how the grappling hook was best used. If you launch your hook at a nearby obstruction while standing still, you’ll be dragged lazily along the ground, clumsily bumping into any rocks along the way. But if used with momentum and well-placed shots, the grappling hook allows for swift, fluent chains of wall-runs and double-jumps. It only took me a few games before I was efficiently manipulating my pilot’s movements while being towed across the battlefield, up buildings, or even down toward unsuspecting Titans. It’s a tool which requires experimentation and skill to use, and it’s a ton of fun once you’ve figured it out!

I spent most of my two weekends with Titanfall 2’s pre-alpha test playing Bounty — a new mode to Titanfall wherein two teams of six battle and are rewarded with cash for each kill. Rewards may be earned by killing AI bots, other players, or AI Titan “bounties,” which drop once every few minutes and can be pursued by both teams for significant rewards. After the bounty is killed, two nodes open at each end of the map for players to deposit their rewards. If you’re killed by another player at any point before depositing your booty, half of it goes to your assailant. Some of the most exhilarating (and frustrating) moments I experienced during the pre-alpha test were the result of these bum-rushes to secure my points. Most of the time, I would scurry to the bank on my team’s side, either carefully navigating buildings and other interiors to remain out of sight, or frantically wall-running and hookshot-ing my way across the map as quickly as possible. However, when I was feeling especially daring, I would hang around the enemy’s bank and pick them off as they came, quickly deposit my cut of their rewards, then repeat. It’s a risky move which yields very high rewards.

Titan combat is still just as exciting as back in 2014, but the Pilot vs. Titan dynamic has changed moderately. The titular moment of watching your Titan drop from the heavens still conjures a sense of glorious excitement unique to the FPS genre. But what follows might not always feel as grandiose. Titan-on-Titan combat is always exciting; a duel which ranges from the elegance of trading gunfire and vortex shields to the brutality of a gargantuan fist fight. The balance between Pilots on-foot versus those resplendent in mech-suits, however, feels off in the more open maps. On Forwardbase Kodai — a very spacious level with two bases, hilly terrain, and one tilted Tower of Pisa-esque edifice in the center — Titans are only able to freely move around in areas with high exposure, normally resulting in easy kills for Pilots hiding on rooftops. Most of my Pilot-on-Titan kills on this map in particular were achieved by simply camping up on a small fortification and peeking my head out from cover to ping a distant Titan with my charge rifle. Thankfully, Respawn nerfed this long-ranged weapon for the pre-alpha test’s second week, but it still proved most effective against Titans in open fields.

Boomtown, on the other hand, is a map made from the same mold as those of the first game. Plentiful with buildings, tight channels of streets, and indoor corridors, Boomtown is perfectly situated for close-quarters Titan brawls and swift on-foot platforming. Here, I felt I had more of a chance against pesky Pilots peeking in and out of cover; normally piloting a heavy Titan equipped with a grenade launcher, it was much easier on this map to find Pilots hiding inside buildings and send them a barrage of explosive rounds before recommencing the Titan brawls on the streets. Conversely, escape on foot was much more attainable when I could start wall-running around corners and out of sight from most any area of the map. Using the grapple hook in Boomtown is a bit more tedious without the more forgiving wide open spaces of Forwardbase Kodai. But once I got my bearings experimenting in the more open maps, weaving through the streets and over the rooftops of Boomtown became the most rewarding experience out of all the maps offered during the test.

Another scruple I had with Titanfall 2’s open maps (and most online shooters in general) was how they affected Pilot vs. Pilot combat. With most shooters, the results of one-on-one exchanges normally come down to skill and reflexes — unless you’re looking the wrong way. With few enclosed spaces and less focused objectives, I felt most of my deaths and kills were the result of one player getting caught off guard. Titanfall 2 comes from a breed of shooters which focuses on individual player achievement more than team achievement, which incentivises lone wolf run-and-gun playstyles (with the exception of Titanfall’s objective-based mode Hardpoint). This was certainly a common trend in most multiplayer shooters, but now feels shallow and unfocused when compared to new hits like Overwatch and Destiny. I should acknowledge, however, that strong familiarity with the maps might easily abate this blindside tug of war.

Based on what I experienced during the pre-alpha tech test, Titanfall 2 certainly feels a lot like its predecessor, and it often falls in line with other near-future military shooters. But there was enough new, genuinely innovative additions to shake things up for the game’s multiplayer scene. The grappling hook proved to be an exciting and fun new addition which requires real skill to use effectively, and the classic Titan gameplay is still thrilling, especially as a reward for quality performance on foot. I’d like to see some tweaks in balance between Titans and Pilots, as where it stands currently, Goliath often falls to David. I also hope more focus will be given to objective-based modes to get players working together, though it could very well be too late for that. Otherwise, Titanfall 2’s pre-alpha multiplayer made for a great time, and I cannot wait to see what Respawn has in store for the single-player campaign.