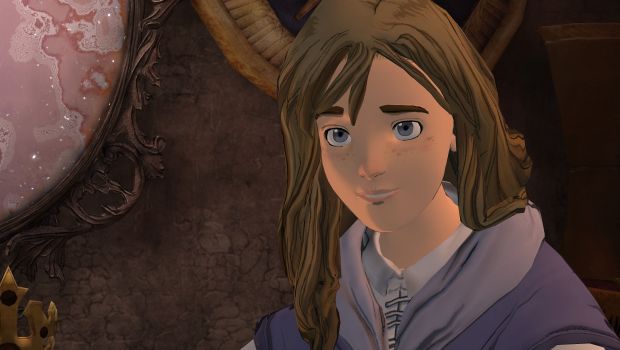 There are times in your life when you start a project and in your heart of hearts you know what you are doing is right. You feel it deep in your soul. When you meet people who are in that same situation, you are instantly drawn in and you get to share in a bit of that energy. That is exactly what I felt when I met Matt Korba. As Founder and Creative Director of The Odd Gentlemen Studios, he and his team are responsible for resurrecting one of gaming’s most venerable and storied franchises — King’s Quest.

King’s Quest harkens back to the golden age of point-and-click adventure games. Korba and company want to bring back what made the original series so alluring, while also updating it for a modern audience. The first Chapter (I wouldn’t call them Episodes as they are self-contained periods in King Graham’s life, spanning quite a few hours, unlike the shorter episodic titles we are used to) is entitled “A Knight to Remember”. Our demo started with King Graham as an old man. Voiced by the great Christopher Lloyd, Graham’s Granddaughter Gwendolyn is at a young impressionable age, and she’s come to her Grandfather for advice. Gwendolyn is facing a fencing tournament and she’s nervous. Using his own youth as allegory, you as the player will provide stories of bravery, compassion, or wisdom. If you’ve seen the movie Big Fish or The Princess Bride, you know exactly what you are in for here.

The venerable King offers his worldly advice to his grandaughter

A Knight to Remember starts with Graham as a would-be knight. While he may one day become the leader of the land of Daventry, his youth was one of flailing hilarity and laughable circumstances. Accidentally rolling down a hill and into a mud pit, Graham extends out his hand to at least deftly catch his hat with a flourish, only to watch it end up in the mud. His feet finally on the road towards the castle, he tells Gwendolen “After gracefully repelling down, I finally found a road and began my adventure”. To demo some of the signature comedy in this title, Korba sets off on the wrong way, prompting Gwendolen to say “Grandpa! You can’t leave Triumph!” Continuing to attempt to leave will have Christopher Lloyd saying “AHEM! EAST!” or eventually “Suddenly a gust of wind rushed down the road and I headed EAST!”as a log falls into place to block the way. How the story unfolds is up to you, but trying to head too far off the beaten path can only end in hilarity. It is immediately clear that Korba and his team are making a story about stories. Having Ken and Roberta as consultants for the game certainly helped, but The Odd Gentlemen Studios understands it to their core — they aren’t just emulating or copying.

As Graham arrives at the bridge to the castle, he finds that it is out. Across the path, the other would-be knights are already on the march. He’s arrived late as he thought the tournament was the next day. This adventure is off to a rough start. As Graham walks up to the horn, the HUD appears. In this version of King’s Quest, the HUD only appears when there is a contextual reason for it to do so, leaving 100% of the screen real estate for the beautiful handcrafted cel-shaded artwork. Adjacent to the bridge is a horn which Graham decides to blow. “The horn was broken, but that didn’t stop me from blowing on it” is the initial remark, but a second attempt has Graham remarking “..and I never tried to blow that horn…again…” In King’s Quest, repetition is the fast track to comedy.

Hand crafted artwork taken to the next level

When I state that the artwork is hand crafted, I literally mean that the team drew out the art pieces on paper, scanned them in at a very high resolution, and then re-imported them into the game. Again, when you see a labor of love, it’s apparent.

Jumping ahead, Graham finally gets past the first bridge and encounters…another broken bridge. This time, there is a cadre of knights guarding the bridge. Graham asks if he might be able to help repair it, but they comically cite a laundry list of goofy rules and regulations in a near Monty Python-esque manner. When Graham looks into his magic mirror (your inventory, and a nod to the past for fans) to use his hatchet, we find out that Gwendolyn has a bit of an obsession with it.

“Did you use the hatchet on that big tree?”
“You cut down the rope, knocked down those guys, and scored victory at the tournament?”
“You cut…” “NO CUTTING!”

Hatchet aside, he’d have to find another way to cross the river. There are some nearby bees, but they aren’t quite distracting enough. He’d need to create a “distress” to get the other knights to abandon their post. A few awkward wobbles and Graham ends up in the river needing to be ‘rescued’. After pulling him to shore, they then gathered to debate just who was the most helpful during this ‘crisis’. A quick tap of the nearby beehive to drop it in their midst clears the path, allowing our future-King to finally take a shot at repairing the busted bridge alongside the other rookie knights. Or we would, if they’d stop pushing us off and saying things like “Your hero…is thinking”, or “How about you let us big kids figure this out.”

In turn, the Knights showcase their skills to traverse the river. One picks up a piece of dropped rope, shooting it across the bridge and ambling across the rope like an armored ninja. With a nod, he throws the rope back to Graham to give it a try. Using a first person view, Graham locks onto the bullseye, performs a perfect pull on the bow, and the rope shoots forward about three feet. Oh well, at least Graham can now add a rope to his inventory.

Pulling out the hatchet to try to create a path by felling a tree, Graham gets shoved out of the way as a far larger knight simply shoves the tree over with ease. After casually walking across, he shoves the log into the water. Not everyone is going to play nice.

Making his way down to the river edge again, Graham now has a path across via the log which has lodged against nearby rocks. Before he can make it across, another knight shoves past, sending the log back to the shore with Graham on top. You see, Graham is a creative and intelligent sort of hero. He may not be the strongest, or the fastest, but with the guidance of the player, he can always be the smartest.

Using the axe on the log, Graham crafts a raft that he can lash together with the rope. Before he can use his cleverly crafted raft a knight named Manny (who stands roughly three feet tall) just proudly strolls across. It seems he could have walked across the entire time, and he’s been watching Graham the entire time. Wallace Shawn, the “Inconceivable!” guy Vinzini from The Princess Bride, voices this hilarious character. He remarks “Without you, no one would have made it across. They’ll never admit it though!”, and despite our clunky approach, he’s entirely right.

Skipping around in the demo again, we got to see a lot more influences from other King’s Quest titles. The open world forest with its branching puzzle structure is heavily inspired by the first two titles. The nearby town (complete with a character voiced by Zelda Williams, daughter of the late comedian Robin Williams) could have been cut straight out of King’s Quest 5. As Korba drives through the remainder of the level, he points out the otherwise-invisible underpinnings of how the story is told. Zelda’s character provides bravery options, whereas the Baker will offer compassion. A nearby Curiosity shop represents wisdom, and a little mischievous nature. Everyone will remember the decisions you make, spanning across all five episodes, so you’ll have to be mindful of your choices.

In a final sequence, we see Graham attempt to cross a bridge. It turns out to be a giant bridge troll. Convincing the troll that he is a hideous bridge troll as well, Graham engages in a fully dance through quicktime events to earn passage. Those of you who think back to the second King’s Quest title might recall a similarity to a section that only allows you to cross seven times as the eighth cross would cause the troll to ‘emotionally collapse’. These plays on words are part and parcel to puzzles as well as how you progress through the game world.

Graham kinda sucks at swimming too. How did this guy ever become King?!

I came away from my time with King’s Quest eager to get home and reinstall the eight games once more to relive all of those great childhood moments. It’s not that I needed to have played the previous games, but I wanted to wring every bit of nostalgia out of this fresh adventure. I’m very glad to see the return of the golden age of adventure games, and it’s fantastic to see such a well polished and amazing family-focused game leading the charge. You won’t have to wait long either — the first chapter, “A Knight to Remember” is set for release on PC, PS3, PS4, Xbox 360, and Xbox One on July 28th, 2015.