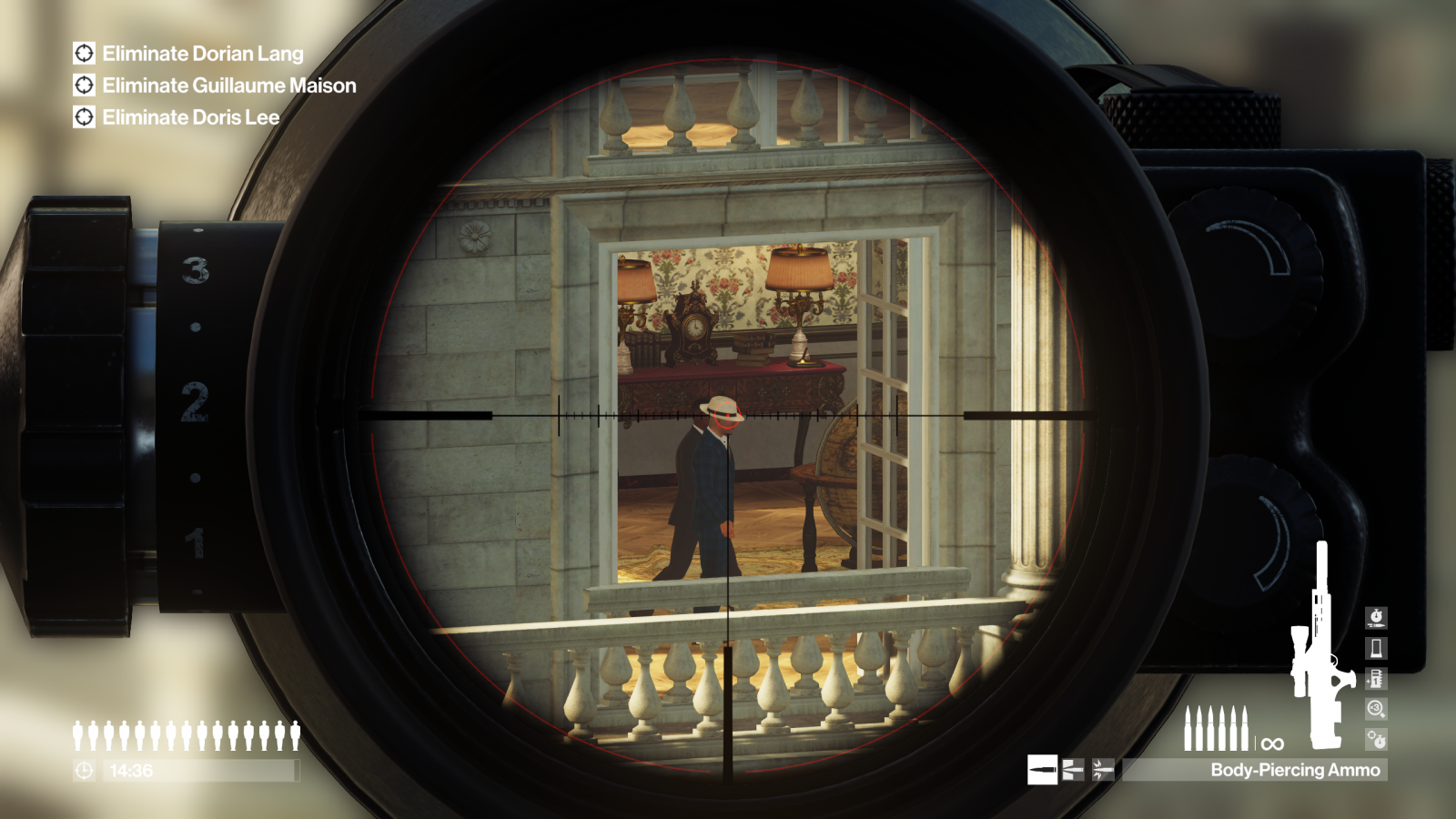 Nothing quite ruins a wedding like a sniper taking out your guests. Hitman: Sniper Assassin has you taking down three targets as they get to together for a wedding. You have fifteen minutes to take them, and their bodyguards, down. In usual Hitman fashion, you have plenty of options when it comes to murder. IO Interactive continues to be some of the best when it comes to building areas for players to mess around in. The main draw of the game is to find new ways to kill your targets while avoiding killing civilians. It makes a short, fifteen minute game last far past an initial run. Not too bad for a pre-order bonus.

For the first time in the series, Hitman: Sniper Assassin offers online co-op. However, you need a friend to have also pre-ordered the game as there is no online matchmaking. Since I don’t have any friends I rocked this game solo. Thankfully there going solo actually offers some benefits. Normally, two players take the role of Knight and Stone. Knight gets some Wall-Piercing ammo that, unbelievably, pierces walls. Stone gets the Shockwave ammo that has a slight explosion to take out multiple enemies. When you play solo you get to be the star himself, Agent 47. As Agent 47 you don’t have to worry about which ammo type to use as you get access to both.

Completing the mission itself is as easy as breathing. You just shoot everyone. That’s it. They can’t fire back and it is super easy to kill them as they try to run away. No, the challenge comes from doing this undetected. Trying to do this stealthily is a true challenge. You have to get creative with how you take out enemies as you can’t go and hide the bodies. This encourages you to play around with the environment to see just what you can do. Shooting fire extinguishers to draw people away from prying eyes is always satisfying. Once I lured two bodyguards to an out-of-the-way alley and was able to electrocute them by shooting a barrel of water and an electric light nearby. The best part is I had no idea it would do that. I honestly thought the barrel was going to explode. While classic video game knowledge may have lead me astray there, it did still work out in my favor.

Beyond just playing around in the environment, there is an actual reason to replay the mission. As you continue to play you unlock extra bonuses for your sniper, such increasing reload speed and ammo capacity. While this isn’t worth it on its own, it is a nice bonus and gives you an extra reason to go through the level just one more time. These little upgrades build up quickly to really make you feel like a badass assassin and make doing things quietly just a little bit easier.

Hitman: Sniper Assassin could be an interesting idea to expand upon for Hitman 2. It would definitely need some variety, but sniping targets in open environments is entertaining. Even with its one mission, it is easy to play for a couple hours just trying new things out. It has the same freedom that makes Hitman games great. As far as pre-order bonuses go, you could certainly do worse than a solid sniping game.

You can see the game in action here.