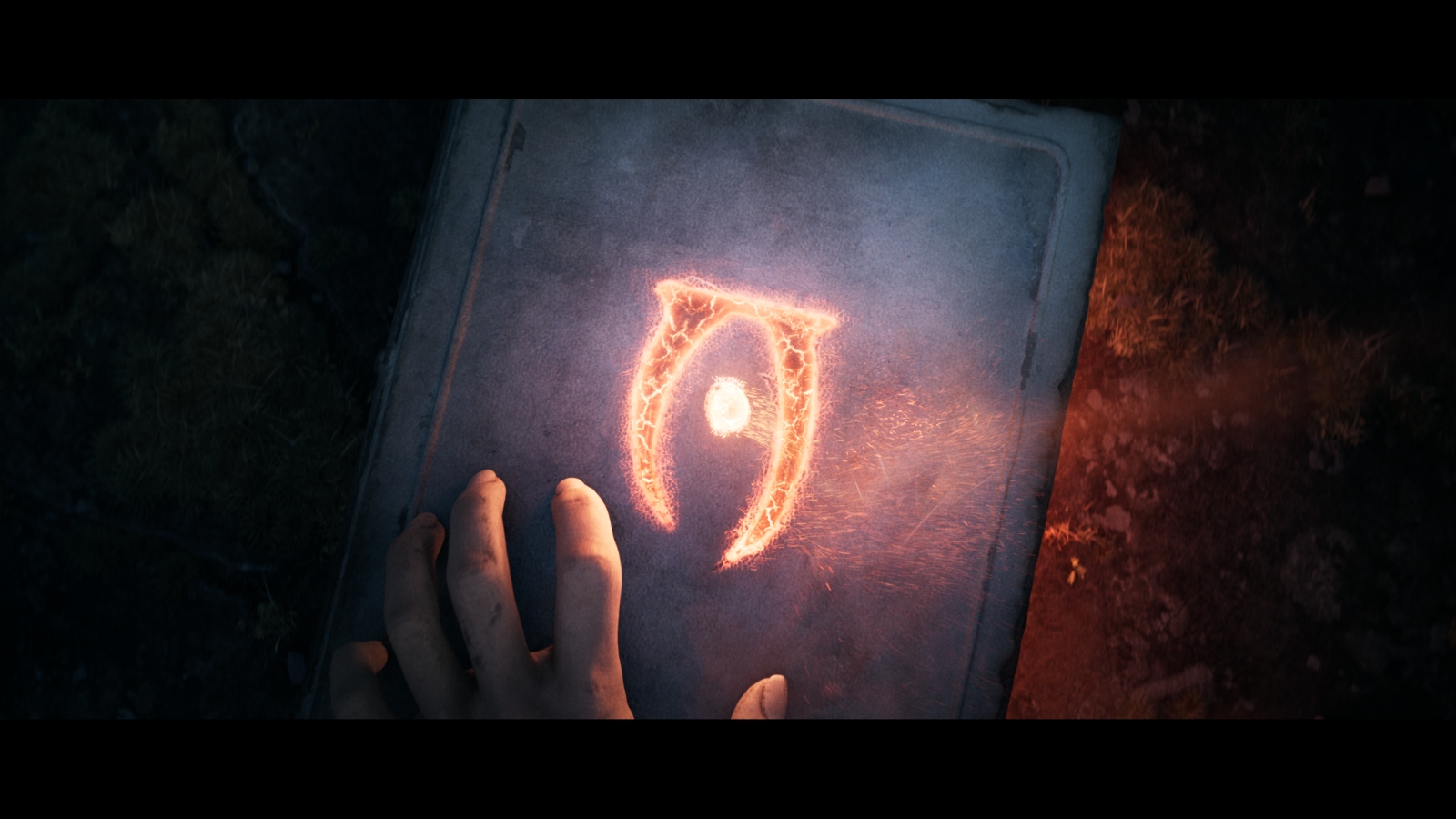 Last week I got to attend a press event with Elder Scrolls Online Creative Director Rich Lambert to talk about Blackwood, their newest Chapter coming out on June 1st. After the event, a select few members of the press got to hop into a private server to check out the new zone. The following day I got to sit down with Rich for an exclusive one on one interview, which will be posted very soon so keep an eye out.

I’ll be one of the first to tell you, some REALLY cool things are coming to the popular massively multiplayer online game. When I say popular, I’m not exaggerating; Rich announced that ESO now has over 18 million players, which is a huge accomplishment in the MMORPG world, and I couldn’t be more thrilled for them. I am an ESO vet that has been playing since the early days of beta, and have been with the game for the long haul. It’s gone through a lot of different phases to get where it is today, and has carved out a unique space in the genre. Breaking some of the molds you see in almost every other MMO, ESO reworked its entire game to be a choose-your-own-adventure model, where anyone at any level can jump in and experience anything in the game, with the exception being Trials, which are ESO’s version of a raid. This is something I appreciate, as three generations of my family play this game together. My 74 year old mom, and my 7 year old son play with me, and we always find stuff to do together even though our play styles are so different, and I think that has really clicked with the community to be a huge part of the game’s current success.

The Elder Scrolls Online: Blackwood - All Roads Lead to the Deadlands

The ESO dev team is very specific when they say that the bigger content that comes out is called a “Chapter” versus an “Expansion”. When you think about expansions in most MMOs you think of having to hit the new maximum level again, get end-game gear again, and go through the grind of linear content that has boring repeatable dailies. This isn’t the case with ESO, which is why I LOVE this game so much. A Chapter in ESO like the upcoming Blackwood addition will have new content, dozens of hours of new quests, usually a new Trial or two, dungeons, and exciting interactive public overworld content like group events, bosses etc. The huge difference between ESO and every other MMO is anyone of any level can jump right in. Once you’ve hit Champion Level 160 in ESO (which is very easy to obtain) the gear will stay that level throughout all your content, you just pick and choose the set pieces you want. It’s totally flexible and fun, without the pressure of constantly keeping up with current content. The dev team makes each Chapter a year long event, where the content and stories come out in phases, so as not to overwhelm players. 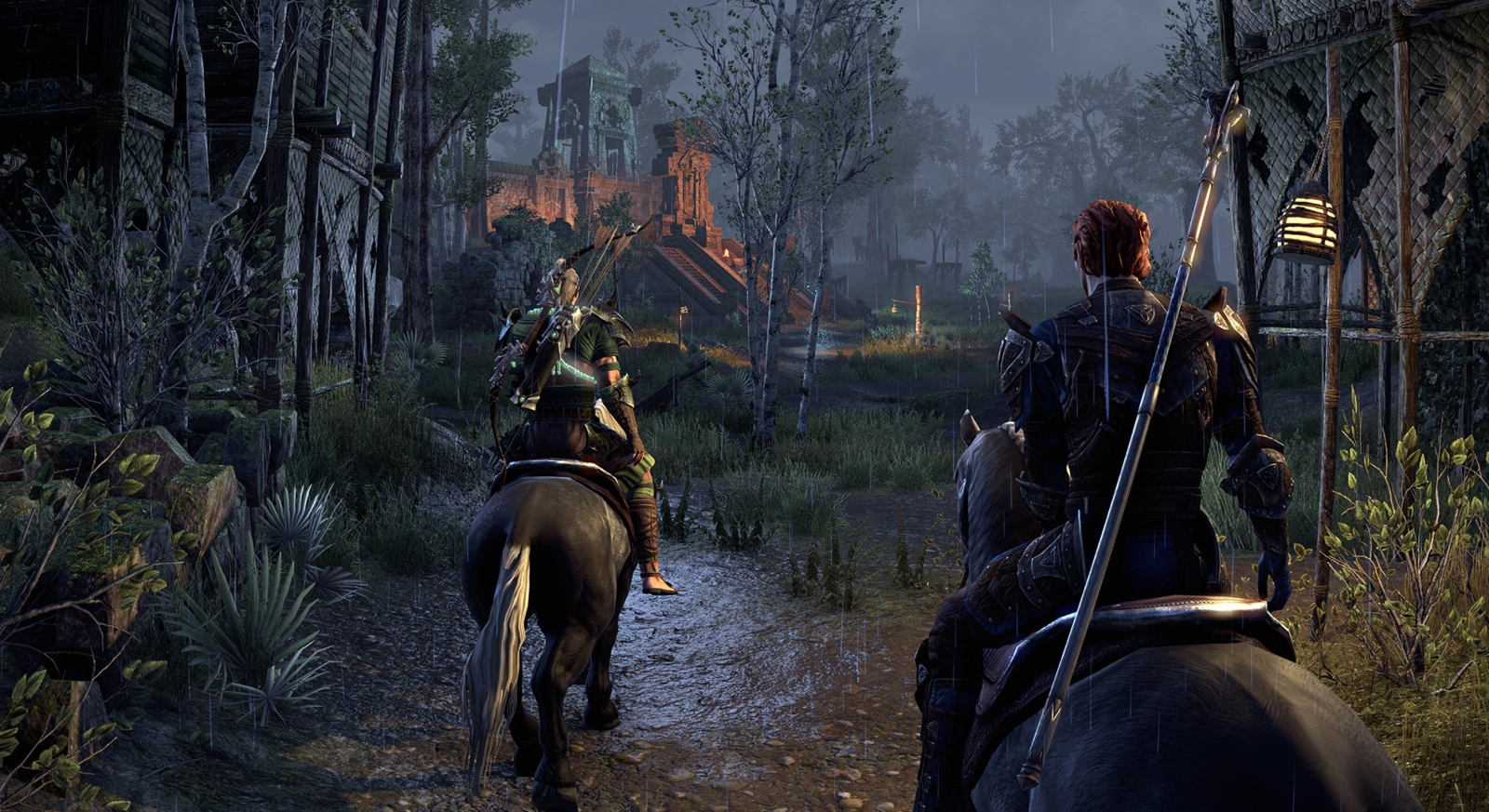 A player adventuring with Bastian, one of two Companions launching with Blackwood.

Blackwood’s biggest feature will be the addition of Companions. We’ll see two at launch, obtainable through short, fun questlines. I played through the quests to get Bastian on the private server. He’s had a lot of struggles growing up in a wealthy family who took him in under the guise of his parents dying. I am about four hours into his quest line and having a blast learning about him and his snooty foster brother Quistley.

Companions are able to take the place of a real player, complete with their own gear, spells, and abilities. While they can take the place of players in content, they will never be as powerful as a real player. Fully customizable, they can tank, dps, or heal, depending on the spells you equip them with. In dungeons they can take the spot of missing players, which could help newer players become more comfortable with running dungeons without the fear of being yelled at for doing something wrong. They are not considered pets though, and they will take an actual player slot in a four man dungeon. This could enable players to effectively finish easier dungeons without the hassle of going through a group finder. Companions will not be able to go with players into Trials or PvP content.

Companions will also have rapport with you, which can be affected positively or negatively by your actions. Rich hinted at a lot of things that the devs would love to add to the game eventually, such as relationships with the Companions, but at launch I think we’ll see a basic version of things. Something else to note is that you can fully customize your Companions with outfits, mounts and weapons. I am so excited for this, and had a lot of fun seeing it on the private server! 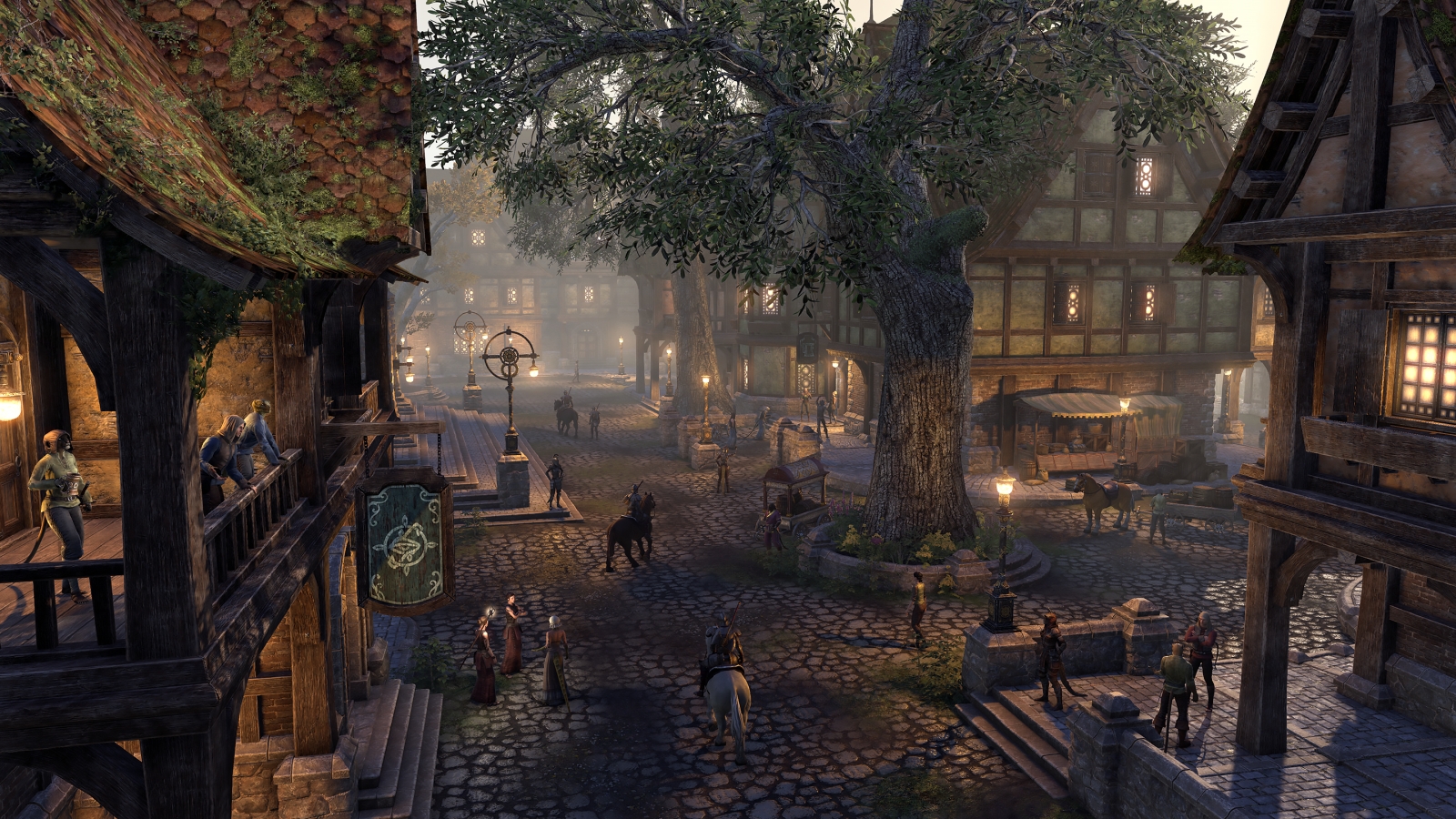 A glimpse at the city of Lewayiin.

Blackwood will also have players revisiting the familiar city of Leyawiin from TES:4 Oblivion. This will be our central hub throughout the Blackwood Chapter. Within the zone of Blackwood, there will be all new public events, similar to how the Dragons in Elsweyr and the Harrowstorms in Greymoor worked. But this time, you’ll get random portals on the map which take you into the Deadlands. Inside the portals you will get random events that you have to fight your way through to succeed. Rich explained them as little mini-dungeon romps vs the current map events in Elsweyr and Greymoor. 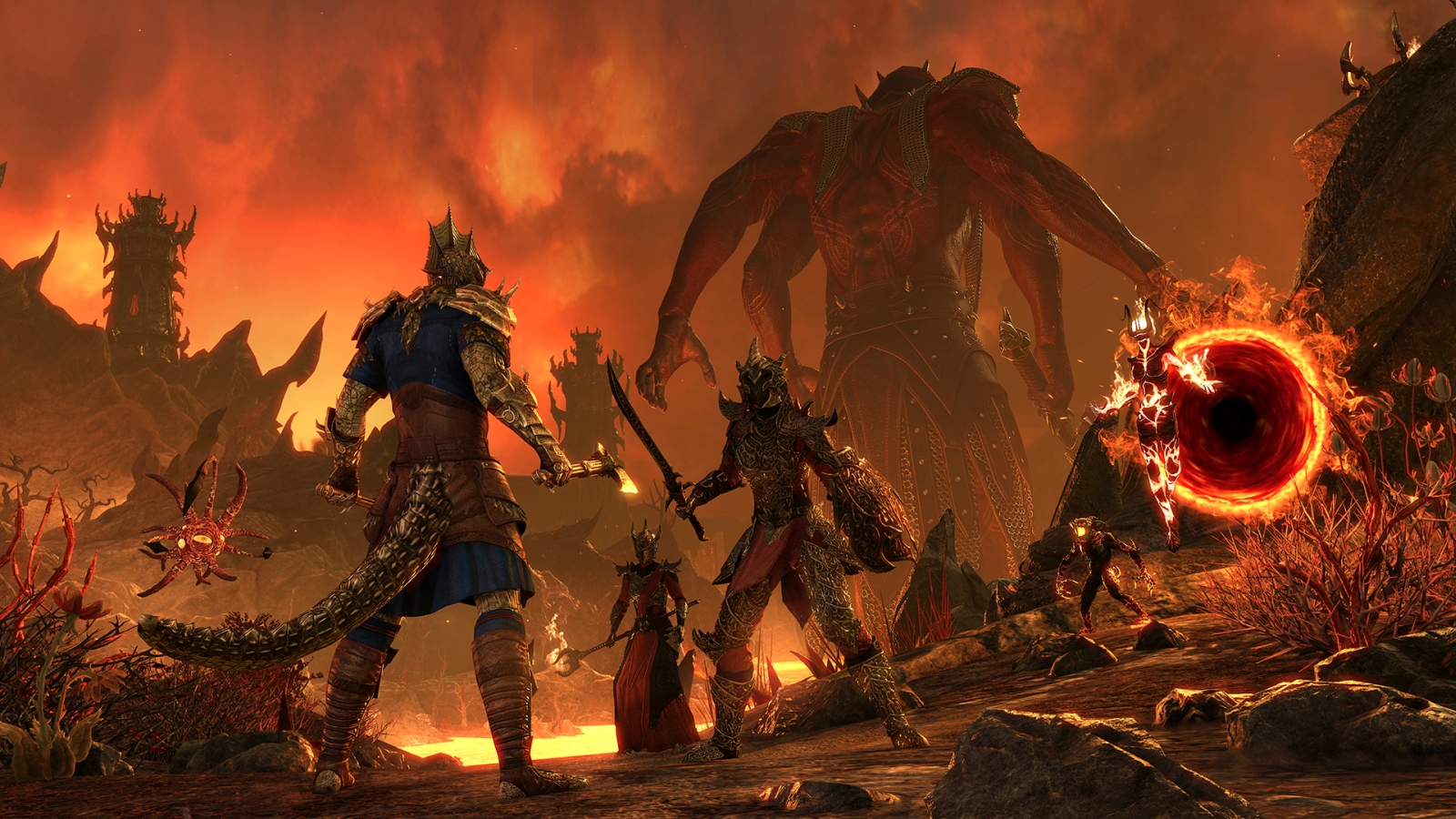 The parts of the zone that I saw that were fully finished were beautiful. Blackwood sits on the border of Shadowfen so parts of it are a bog, but other areas have green rolling hills with gorgeous wildflowers. I ran across a cottage with an apple tree farm that looked so quaint. It looks familiar, but feels new and fresh at the same time. Think Argonian meets Imperial.

Rich also hinted that a lot of our favorite NPCs will make an appearance. As most of you know, the Prologue that leads up to Blackwood features Eveli Sharp-Arrow, the super spunky Wood Elf who fashions herself a detective, and the Dremora Lyranth. He also told us that good ol’ Lady Laurent and her manservant Stibbons will make an appearance, and I also came across the Duke of Crows while exploring. I tried to see if my personal favorite, Rigurt the Brash would also star in the show, but Rich wouldn’t budge. Hopefully Raz and Rigurt will be in Blackwood, but either way I am sure that this Chapter of ESO will be amazing. 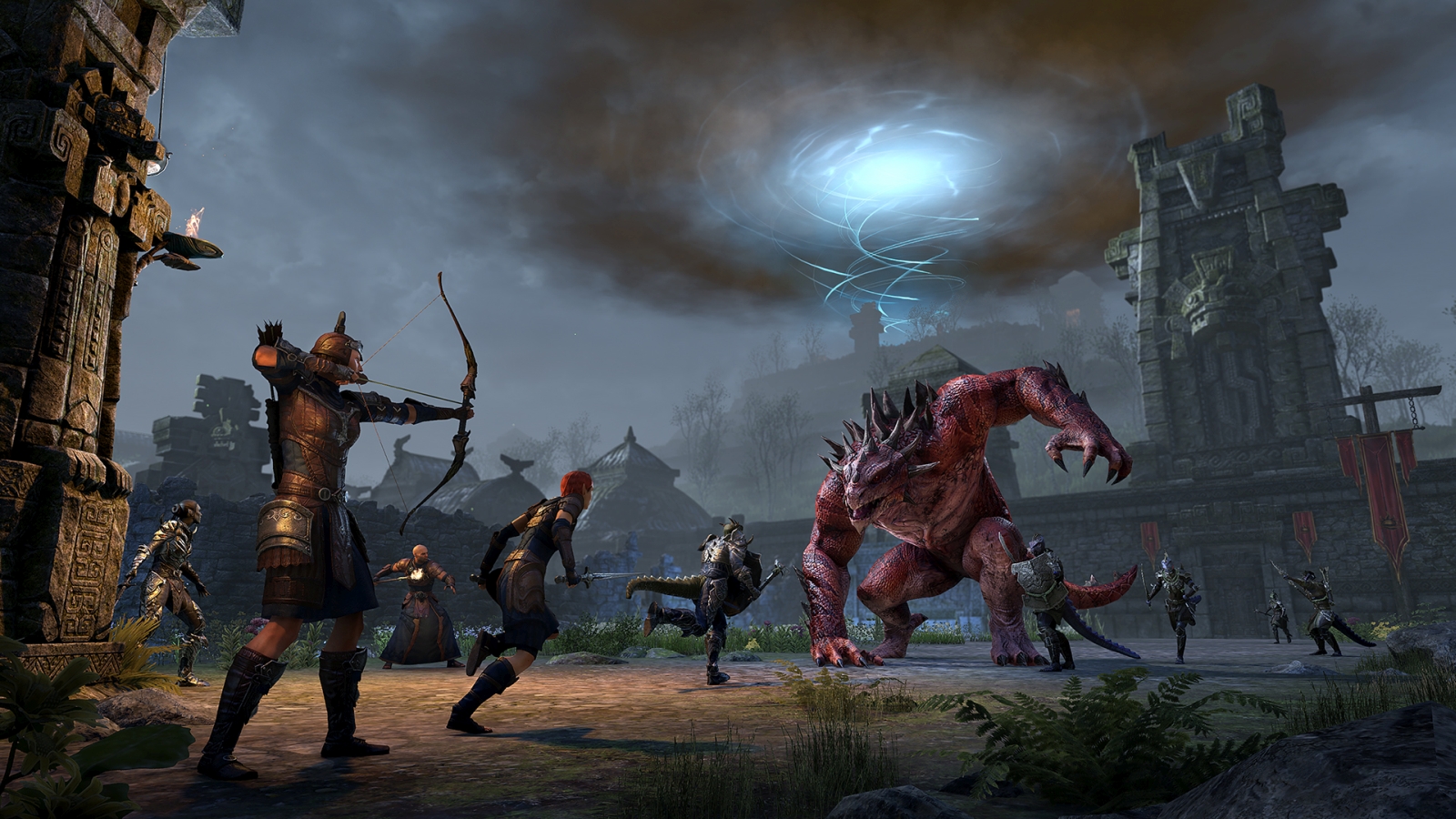 There will also be a new Trial that launches with Blackwood for the Veteran players. Rockgrove will be a 12 man Trial with Hardmode, and it will have a new mount that you can obtain for completing all of the achievements. Vets will also be happy to hear that you can achieve five piece bonuses from combining both perfected and non-perfected gear.

Something else that is worth mentioning is the addition of Endeavors, which will be daily/weekly tasks that will award a new type of currency called Seals of Endeavor. The way it was explained is that the game will automatically track certain things you do, such as completing three dungeons, or killing fifty mobs. You won’t have to go to a quest giver to pick these up (yay)! Completing tasks gives you currency to directly purchase items from Crown Crates that were previously only obtainable with spending Crown Gems on. This is a huge bonus for people who can’t buy Crowns to gamble on Crown Crates!

Overall, I am SO excited for the Blackwood Chapter to drop. I have the utmost respect for Rich Lambert and the team that works on ESO. They really listen to what the players want, and try to innovate things to not be the usual boring grind that most MMOs have become. They took their MMO that was failing at launch and did a 180 that turned into a thriving game with a great community. There is truly something for everyone in this game, and I hope they keep innovating!