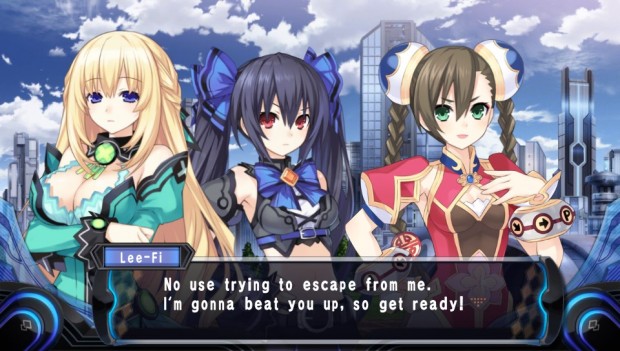 This is the unceremonious “Yes, we have it and are reviewing it” piece about Hyperdevotion Noire: Goddess Black Heart for the Playstation Vita.

I’ve had  the game for a couple days now, and would say I’m a fair bit into it, but games of this size usually need a good amount of hours invested to make a fair decision. Plus, there’s some things I’m wrestling with in the game, but we’ll get to that. This is by no means a final score or verdict on the game, just a preview/early impressions.

I’ve never played a Hyperdimension game before, and my only experience up until now was seeing an occasional mention of it on message boards and screenshots and descriptions in the Playstation Store. I knew it was a JRPG, it had tons of what anime fans refer to as “fan service,” and it centered around cute Japanese girls getting into crazy antics in a world that is a parody of the console wars.

I mean, there’s a character named Lee-Fi who is a Chun-Li parody that tries to fight everyone. That’s pretty great.

Hyperdevotion Noire managed to capture my attention based off both the fact that it’s an SRPG (strategy RPG) and that I had never tried the series before. I learned when I was young that a “no-thank-you” bite is polite, so this was my test drive of a series I had long avoided. I like the occasional anime series, I watched Toonami when I was younger, and I absolutely adore games like Fire Emblem and Devil Survivor.

Well the good news is, as an SRPG, this game is pretty good. It hasn’t yet hit the highs of other strategy titles, but I could definitely see myself dumping hours into the campaign and side missions. The combat plays out in a very standard turn-based manner, and there’s the standard backstabs, positioning a unit’s facing and getting a boost when you use skills while standing next to an allied unit.

The bright graphics and fun characters are an interesting change from the SRPG norm.

There’s a ton of depth in crafting and farming for equipment, and there’s a variety of ways to customize each of your characters. Your roster of combatants doesn’t get very large, but you can use things like discs and elemental chips to customize their damage, affinity and stats. There’s a fair amount of variation in weapons, but you’ll mostly be using close-ranged fighters. In my time playing, I have yet to get a reliably-ranged fighter.

The graphics are surprisingly good for the Vita. The chibi-battle graphics are an acquired taste, but the cutscenes for big moves and the models of the characters have a cool doll-like aesthetic. They remind me of those Funko figurines, which is adorable until they’re impaling each other with spears and swords. The anime-style portraits and CG’s that play during story events are really nice too, and the motions and change in expressions help add some character beyond what would be considered the typical VN-style story scene.

It was odd at first, but it grows on you, and the animations are still pretty impressive.

The story and characters aren’t very deep, but they’re fun. The parodies of famous franchises and games are pretty entertaining, and create some interesting battle scenarios. The battle with the Street Fighter character Lee-Fi takes place in an electrified fighting ring, and the Metal Gear Solid character’s arena is filled with booby traps and explosives. It’s nothing groundbreaking or emotionally moving, but I found myself laughing and smiling at the funny parodies and interesting situations that happened.

The enemies are also gaming parodies, and usually themed to fit with the stages.

What’s been nagging at me is something I mentioned earlier in the preview – the fan service. Hyperdevotion Noire places you in the shoes of a new guy (explicitly a guy), who by pure luck ends up helping Noire out early on in the story. Noire is instantly taken with you, and names you her “secretary,” and soon you’re basically building a harem of characters. There’s a lot of scenes that seem designed to put characters into compromising situations, like an early-on scene where Noire challenges another girl to a swimsuit beauty pageant for pretty much no reason. Even in the gameplay, there’s fan service. You can use Lily Boosts to power up characters’ skills and have them cost less SP by having multiple allies adjacent when you use the skill. This plays out by the adjacent characters pecking the skill-user on the cheek before the attack. Yes, girl kisses power up your abilities in this game.

Yup. Girl power transferred through kisses on the cheek. An entire game mechanic based around this.

In the grand scheme of things, it isn’t the worst I’ve seen, but it pervades so much of the game that it can’t be very easily ignored. I know that if my friend was asking for a new SRPG to play for their Vita, my early impressions tell me I would recommend this game to them; at the same time, I’d have to warn them about all the fan service, and I’d feel weird recommending it.

I’m enjoying my time with this game regardless, though, and plan to have a much more in-depth review out before release. If any Hyperdimension fans or just people in general would like to comment on this, you can do so in the comments below! Now back to grinding those Space Invaders for more chips…