I got hands on with Hitman Absolution today.   The mission is simple – the King of Chinatown…must die.  I have several options of making that happen – a well-placed explosive in his car, accidental crushing via an overhead pallet with a weak chain, tainted drugs with a required drug dealer disguise, fugu fish added to food, drink, or drugs, guns blazing, or my personal favorite – the sniper rifle.

The difficulty levels range from easy, normal, hard, expert, and purist, though all but normal are locked out here at E3.  The difficulty level changes affect the number of instinct hints pop out on the level.  These instinct hints help you spot things like a likely meeting spot for a target, a place where your target might eat his lunch, or an idea.  The difficulty level also affects how aware enemies are of your behavior, how forgiving they are when that behavior is strange, how many progressive save points there are, and the patrol pattern complexity of guards.

The demo opens with Agent 47 meeting someone in a fleabag hotel.   A man named Birdie is willing to help us out, but he’d like us to eliminate the King of Chinatown as payment for his assistance.   In this, the second chapter of the game, we enter the marketplace from a nasty alley.  Debris, trash, bottles, and more litter the area amidst stacked boxes and a rusted out rickshaw truck.  Walking through some red gilded doors I am immediately faced with a huge crowd.  This market has people cooking various foods, selling their wares, and otherwise making it difficult for us to cleanly kill our target.   We carefully push through the crowd and locate our target.  He’s inside a red pagoda with two guards on one side entrance and a single guard on the other.  Granted, I could run up and shoot the guy in the face, but that isn’t how Hitman is properly played.   Scouting the area I noted a few ways that I could kill this man.  I could incapacitate a nearby cook, hiding his body and stealing his clothes, thereby granting me access to poison my target.  I could grab a knife and make short work of the man’s neck.  I could shoot him with my silenced pistol.  In the end, I chose to do what any good hitman should do – I set up a happy accident.  Waiting for our King of Chinatown to step off the beaten path to take a leak, I took aim and popped the chain holding a heavy pallet overhead.  The pallet crushed his body, killing him instantly.   This happy accident granted me a nice professionalism and stealth bonus for my score.  We won’t find out what those high scores unlock until the game ships later this year.

With my favor complete, I grab my rifle and head to the roof.  Sitting among the pigeons is a man who can get me information on a girl named Victoria…for a price of course.  The price is simple – he wants my rifle.  A sad day indeed.

Switching to another mission, I take on the Sniper Challenge: 15 minutes, 15 security guards, and one target.   This mode is exclusive to those who preorder on GameStop.  Finally, it was time to end some lives.  My target is Richard Strong – a local

Chicago arms dealer.  The Agency wants Richard and every one of his guards eliminated – they want to send a very clear message.  Arriving by helicopter, I had a very short window of opportunity to do this quietly.  Based on the number of kills, speed, bullets left, and other factors, you’ll pick up a score.  The score is uploaded to PSN or XBL to compare against your friends or opponents globally, again unlocking yet-unnamed bonuses.  The real treat is what happened next.

Heading behind closed doors, I got a look at another complete mission.  John Brook, Brand Director for the Hitman series shows us the 9th mission in the game.   Agent 47 has gone rogue from the ICA and is on the trail of a girl named Victoria.  We have followed a lead named Lenny “The Limp” Dexter (I don’t think I want to know how he got that name), so we can question him.  His gang the Cougars are too dangerous to keep alive, so in this mission we’ll perform five hits and execute a kidnapping.

“Streets of Hope”
Agent 47 starts off by driving an old 50’s car into the city.  It’s here that we see the Hope Cougars – a 50’s style hipster type gang.  Our job is to kill targets named Tyler, Landon Metcalf, Gavin, and two others.   Using our instinct mode to see patrol paths, people of interest, and targets, we locate our first would-be victim.  Illuminated in red, this target heads into the Green Mountain convenience store.  The store is run down with cheap toys and knockoff foods, which is the kind of store you’d expect in a neighborhood in the middle of middletown America.  They are having a closing down sale, and they aren’t the only ones leaving town. We overhear one gang member say that he’s leaving soon, telling the clerk to be quiet about it.   Using a radio on a shelf as a distraction, we make our way up the stairs after this hooligan.  The son-of-a-bitch is talking about selling a child for money, and as much as that infuriates us, we take the silent kill option.  As we stash his body in a nearby armoire we grab some C4 and check our notebook.  In the notebook we see challenges, objectives, and our current score that’ll be logged to the leaderboards.   Heading back downstairs we find the clerk once again blocking our path.  Pulling our pistol doesn’t mean we put a bullet in her skull – we use it to shoot her car, setting off the alarm.  As she runs to investigate her alarm, we make our way outside undetected.  Back on the streets we locate our second target.

Our second target is hanging out near a vehicle garage.  Local cops are milling about, making it a little more difficult to pursue.  Avoiding the distracted cops we make our way into the side entrance. Through our intuition mode we notice that the gas pump has a leak – something useful for later.  As we enter the garage we are immediately flagged as ‘trespassing’ – we’ll have to be careful and remain out of sight.   Sneaking upstairs we see that our target has several friends nearby.  Sneaking through the upstairs storage area, including making our way past some local sheriff deputies, we find our target outside talking on his phone.  Sneaking up we choke him out and subdue him.   We drag him away and over to a nearby wall where we deposit his corpse near the gas pump we saw earlier.  Unfortunately a cop spots us and we have to knife him – it’ll be harder to make this look like an accident.  Making our way back outside and through a side window, we walk calmly outside.  Using the C4 on the gas tank, we walk away and blow up the gas station.   This triggers a secondary explosion unlocking a “Dynamite Harry” Achievement, successfully killing everyone near the explosion and hiding the evidence that we were ever there.  This attracts a great deal of attention as the whole place goes up in smoke, distracting all of the cops who run to investigate.  We still have one more target to kill….

Heading to a nearby junkyard, now with far less police, we have a more clear path in.  Grabbing the attention of a nearby guard dog, we back off and grab a bone  that we can use to pacify the dog after taking out a patrolling civilian.  We dump him into the nearby outhouse after we grab his outfit so that we now look like a mechanic.    Using the outfit to blend in with our surroundings, we casually scratch our head or otherwise obscure our face when other mechanics are nearby, helping to prevent being detected.  We walk past a cop that wouldn’t know whether we are a mechanic or not and stroll into another nearby garage.

Our target is hanging out near a car lift, talking on the phone.  Tossing a wrench under the car to grab his attention, we end him by dropping the lift (and the vehicle it contains) on top of him – another happy accident.  As the remaining cops in the area check out this second freak accident in a single afternoon, we make our way to the next target, Mr. Mason McReady, but unfortunately he’s at a police BBQ.

Surrounded by cops, we’ll obviously need another disguise to complete this objective.  Smashing a cop in the head that had the decency to wander away from the pack for us, we steal his uniform after we smash him in the face with a bottle.  Grabbing a tomahawk from a nearby target dartboard, we fling the axe into our target.  Using the “Point Shooting” mechanic, we mark a group of targets and quitely execute them in rapid succession in the short moment before anyone can react.  This skill burns instinct power to use, but in this case it kept our mission quietly moving forward.  Only two targets remain…

As we scale the wall and prepare to head inside the building, one of our two targets has the misfortune to wander into the carnage we just left at the BBQ.  We don’t hesitate to put a round into his head with our silenced Baller pistol. Inside the building we find a barber preparing to give our final target a shave – he catches lead poisoning of the brain and we take his outfit as well.   Walking past his goons, we walk up to give our final target, Lenny, the shave he’s been waiting for.  Silently dispatching everyone in the room but Lenny, we listen to him brag about exploits that are clearly our handiwork as if they were his own.  With Lenny in our sights, we grab Lenny and “pacify” him to end the demo. 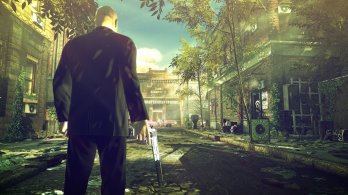 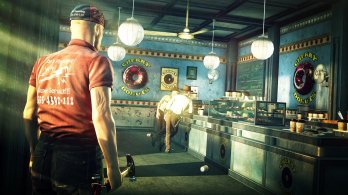 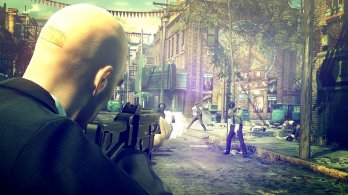 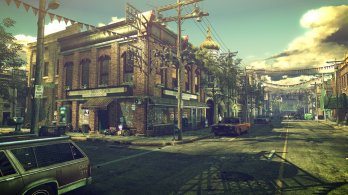 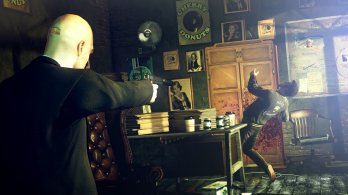 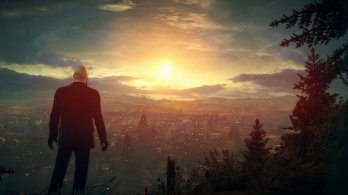