If the subtitle to this preview sounds a bit familiar, that’s because it was spoken by the famous Winston Churchill. After watching all that Sledgehammer Games had to show us about Call Of Duty: Vanguard, it seemed fitting to go and find a quote to match this sneak peek, and this one in particular fits to a tee. Sledgehammer isn’t looking to rewrite history mind you, but share a depiction, one of real people and their struggles in one of the largest conflicts our world has ever known. I was privileged to see the assiduous effort the team is putting into the project, and I’m excited to bring their vision to you today.

I did want to take a moment to call out something that was encouraging in how the event opened. Aaron Halon, the studio director at Sledgehammer, came out and immediately addressed the horrible happenings at Activision Blizzard. Obviously there was plenty that couldn’t be said, after all, there is a lawsuit coming against the company, but everything he said felt genuine. This wasn’t done to make us forget what’s going on, but to let us know it wasn’t going to be left alone and swept under the rug. I for one appreciate the open communication and feeling that someone wasn’t just reading a pre-written statement. 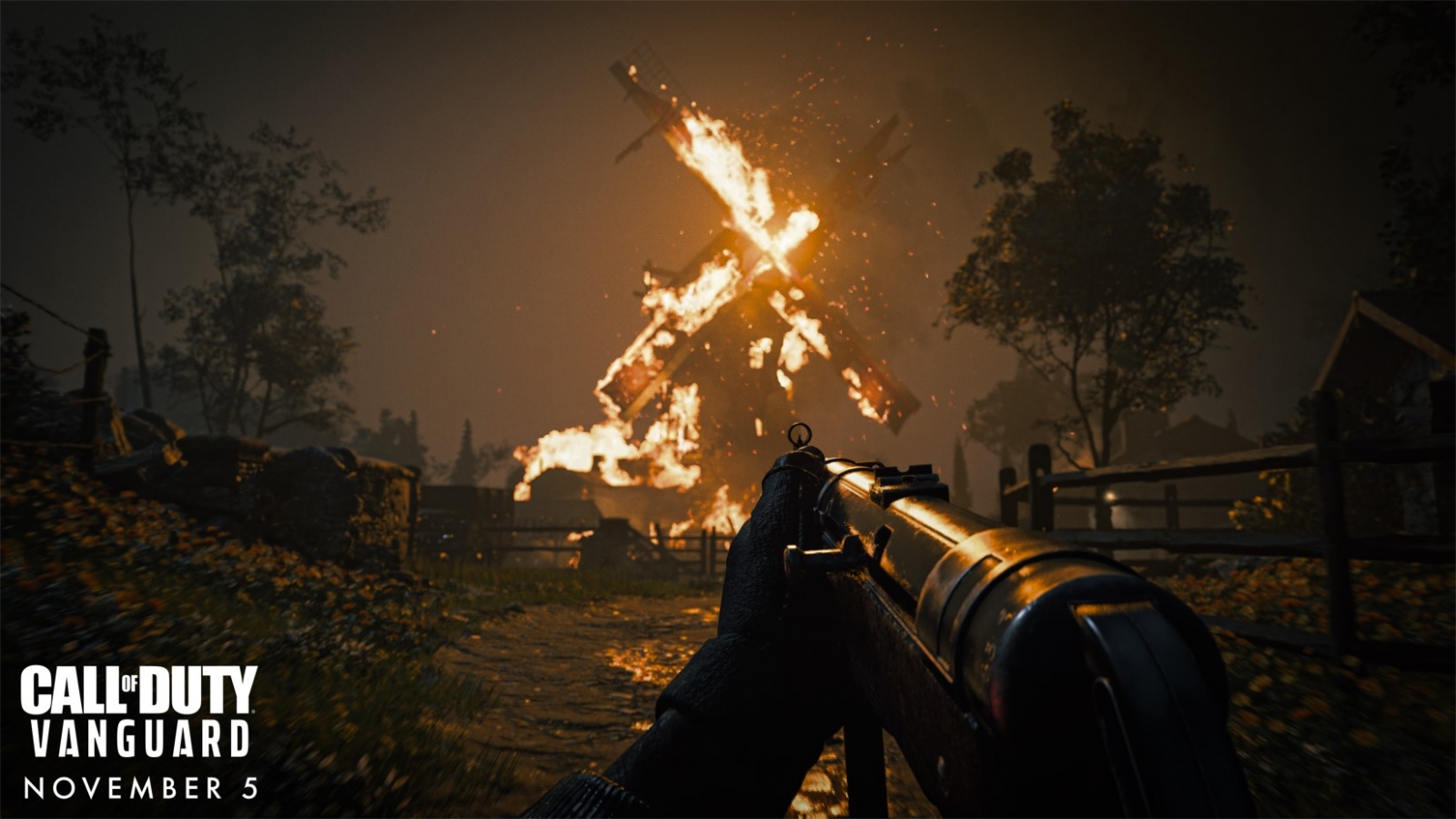 So, let’s get into the nitty gritty of what Call Of Duty: Vanguard is and looks like. We were treated to the reveal trailer that will most likely be the first thing live after the 8/19 Warzone event (which we wrote about here). It’s exactly what you can expect from the team, with plenty of epic setpieces and the spectacle of a movie trailer. The trailer hits its mark; I was excited watching it from beginning to end, taking in the blood-soaked WWII battlefields and shaking my head in disbelief at a pilot firing his pistol into an enemy plane. One thing is for certain, they need to pay the person making these a whole lot of money as I can see this footage alone getting fans excited.

We asked the team how challenging it was to come with something new from a timeline that has been explored so thoroughly, and Game Director Josh Bridge had a great answer. He didn’t feel like it was necessarily challenging, but he felt like they found something that hadn’t been done. History is filled with many stories, you just have to look for them, so the team at Sledgehammer dove into different subsets of it in order to craft what we were shown.

While all of this is awesome, the thing that actually matters is what it plays like. We didn’t get any play time during our event, and we don’t know exactly when that will happen, but we did get to see one of the campaign levels in action. One of the things talked about was how we’re going to see the birth of special forces in the story, how it would be historically inspired rather than a direct telling of the battles. Now, that doesn’t mean the team hasn’t done their homework, as through the presentation we were shown people in history that each of these operatives were based upon, but you aren’t going to be able to write a paper for an assignment with this game. 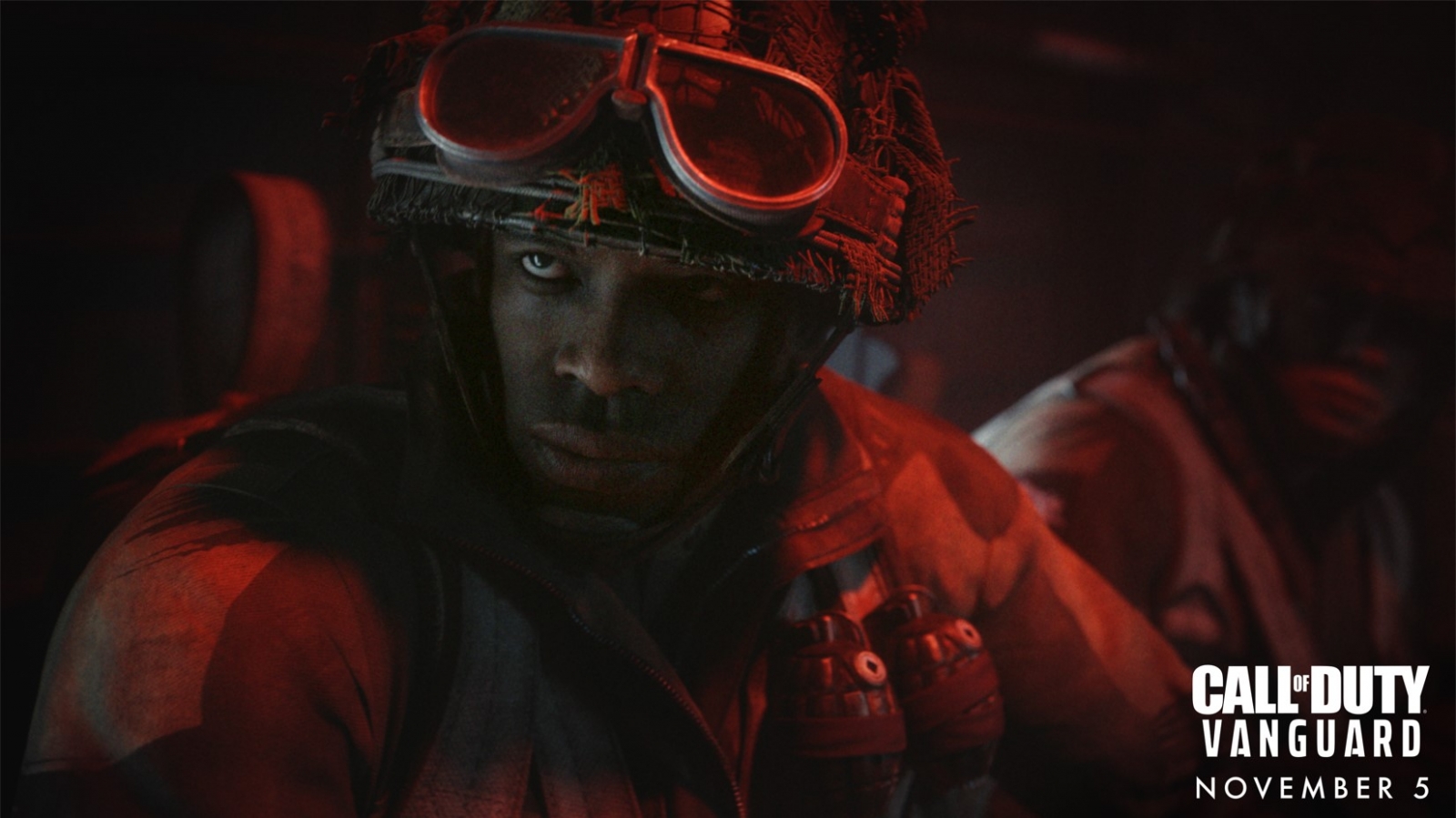 Probably the coolest aspect of what’s happening in the campaign is the war on all fronts, and what happens after the war. Many previous titles engaging in telling the WW2 story often stuck you behind a single character or a specific battle, whereas Call Of Duty: Vanguard will be telling different stories across all fronts, telling the tales of ordinary people becoming extraordinary. There is a unifying narrative; stopping the director of the Gestapo Heinrich Freisinger (based on the real life Henrich Muller), and Project Phoenix, which is the search for Hitler’s successor. Because of the allied powers finding out about this, they form the first special forces team to get to the bottom of it.

Back to the campaign level we were able to see, we literally dive into the action with Sergeant Aurthur Kingsley, a British paratrooper based on Sergeant Sidney Cornell. This is the night before D-Day, with you parachuting into Normandy to secure the area. Of course, nothing generally goes as planned, and we see as much with Arthur relying on his secondary chute when the first one gets destroyed in an explosion. What follows is very much the Call Of Duty formula, with tense moments of sneaking around as Nazi soldiers seek you out.

One thing of note is how stunning the game looks; even though my stream came through somewhat subpar it still looked absolutely gorgeous. As Arthur continued his way through the fields of the level, the ray tracing on display took me by surprise. Watching the lights flashing through the trees as the anti-air cannons fired, the soft glow of fires left behind from crashes, and especially one moment where Arthur shoots a lantern, exposing the shadow of a soldier behind a blanket on a clothesline for you to shoot, were simply breathtaking. The gunplay also looks as steady as it always is, with an impact felt through the screen even without holding a controller. Which, to my excitement, Josh Bridge did confirm we’ll see more Dualsense integration in Vanguard. If everything seen in this level is how the game is going to look and play, count me in. 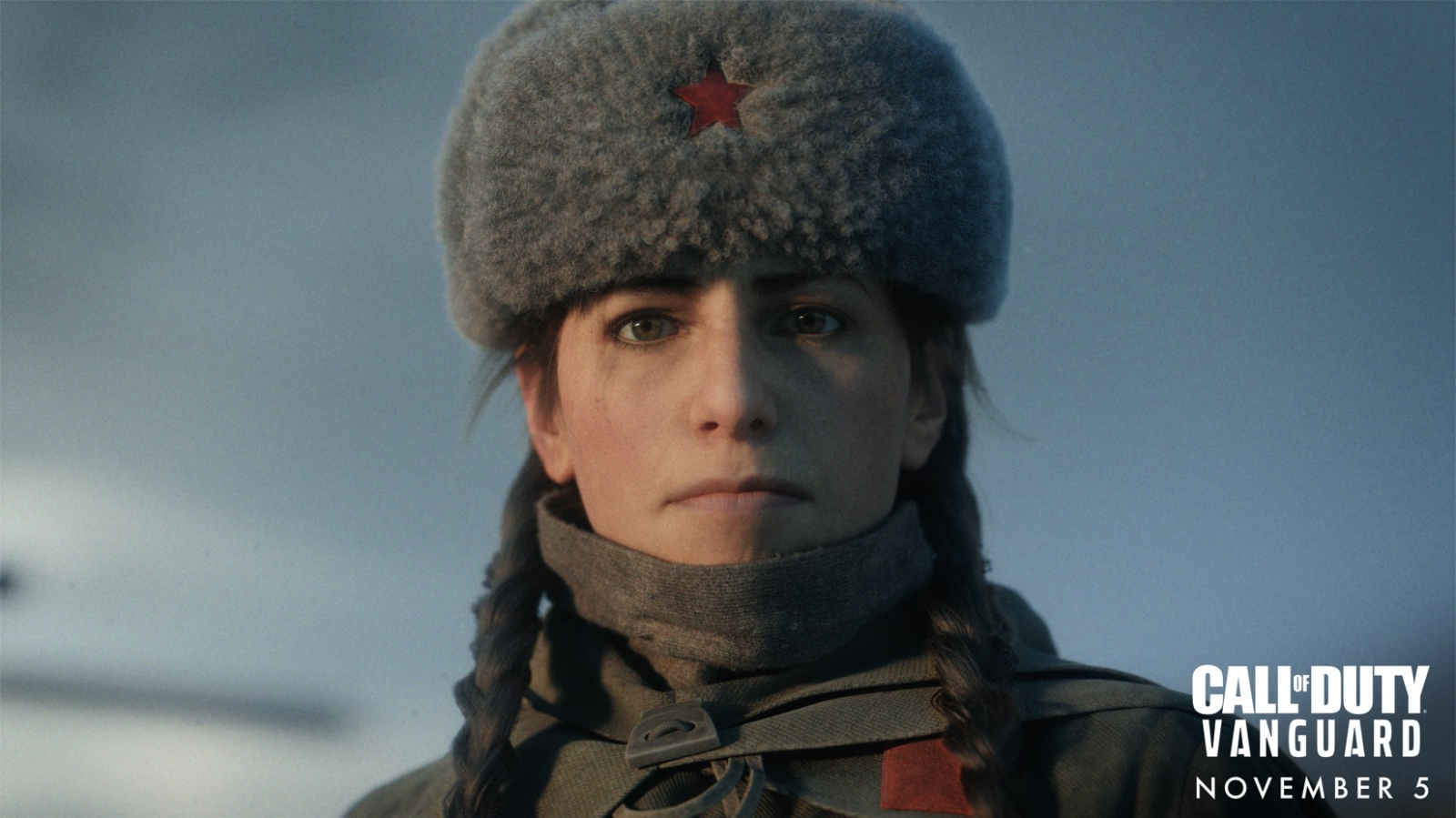 There are several more squad members, all of which we’ll be able to play as, including one who I can’t wait to play as in Lieutenant Polina Petrova, who is based on Russian sniper “Lady Death” or Lyudmila Pavlichenko who killed over 300 enemies in combat. Vernon ‘Mike’ Micheel inspired Captain Wade Jackson, who fights in the Battle of Midway, bringing us into the Pacific front as we’ll get to see him crash land in the Solomon Islands and try to survive until rescue comes. Lastly we see Second Lieutenant Lucas Riggs based on Charles Upham, an infantryman taking us to the tank battles of Africa, and rounding out the special forces team. It was amazing to hear Campaign Creative Director David Swenson talk about all of these soldiers who aren’t just characters in a game, but based on real people with real experiences. Certainly, not all of what we’re looking at is pulled right from a textbook, but there’s a labor of love that can be seen in how Sledgehammer is approaching the story.

I’m one that thoroughly enjoys the campaigns, but I’m even more invested now in the multiplayer, having logged over 400 hours in the last two titles combined. We didn’t get much of a deep dive into the finer details of the multiplayer, one would assume that will be tackled in its own segment, but there was some neat content the development team shared with us. Starting with the best news, the game will be launching with an astounding total of TWENTY multiplayer maps, of which sixteen will be available for 6v6 players. After that being a talking point of my Black Ops Cold War review (which you can read here), I’m certainly happy to see double the map count of the previous title. 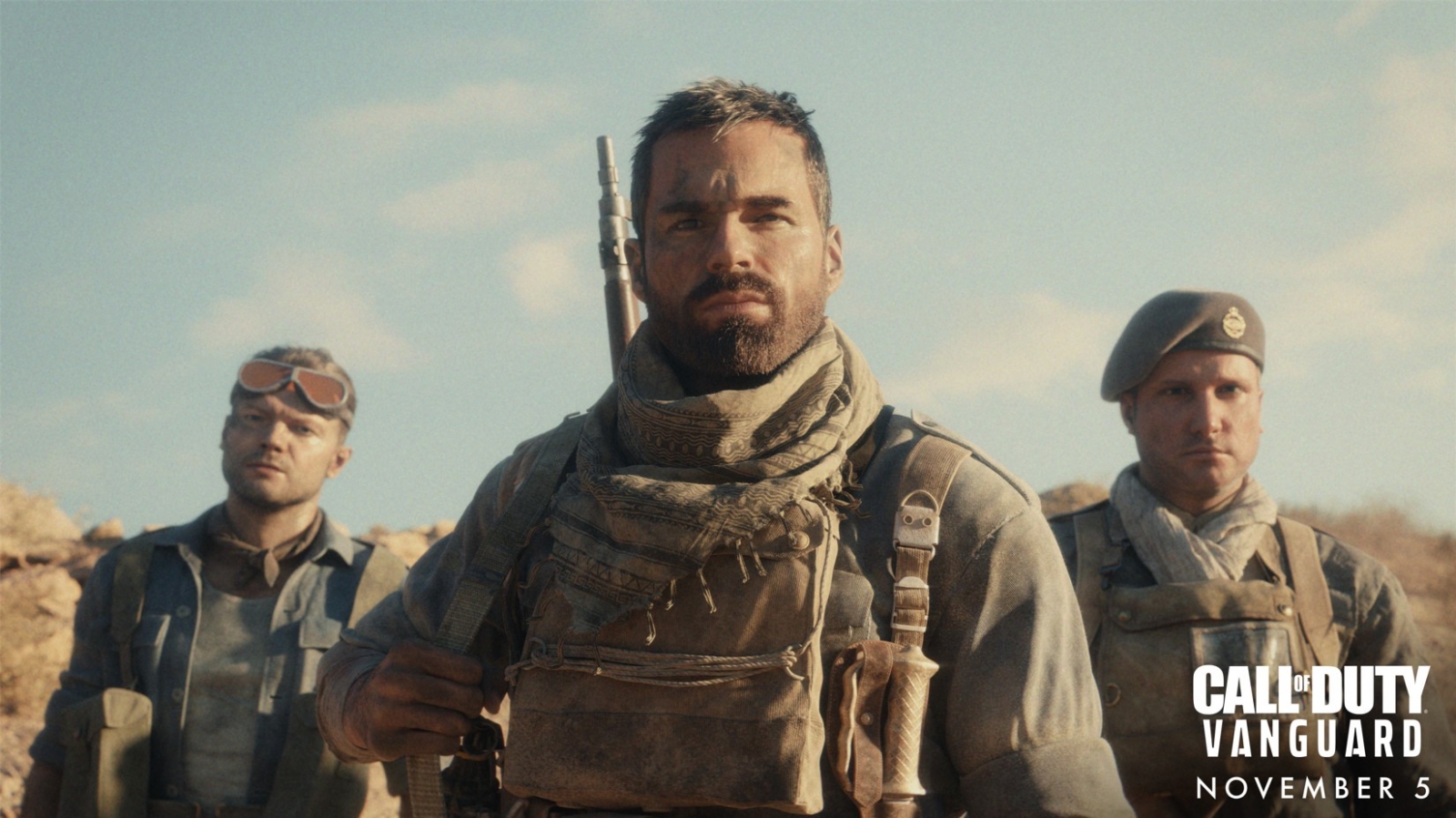 Even though this wasn’t the place for a big multiplayer reveal, Greg Reisdorf, the Multiplayer Creative Director, had plenty to say. The team at Sledgehammer is definitely focused on variety as well as adding new tactics to gameplay. Whether it’s a byproduct of it or not, it certainly seems like the use of the engine behind Infinity Ward’s Modern Warfare reboot in 2019 is making this game shine, as well as the boost in next gen consoles and PCs allowing for more depth in the environments. Utilizing this meshes with their mission to give the best down-the-barrel experience, where using the gun feels impactful, along with working in the popular Gunsmith feature. Mounting your weapon, a facet of Modern Warfare that I missed terribly in Black Ops Cold War, also returns, adding more tactics to how you’re going to play the maps.

It may not be to the level of the Battlefield franchise, but something also brought up in our presentation was adding destructibility to the maps. You won’t be bringing entire buildings down, but from what we were able to see, the devs have worked hard to build strategic spots into the maps, whether it’s a boarded up wall or a stained glass window overlooking a dining room. Functional doors are also coming back, but where they could be a pain in Modern Warfare it seems they’ll be easily torn apart in Vanguard, which will make someone think twice before hiding behind one. I love this addition to Call Of Duty, it isn’t too over the top and it adds another layer to how you play each map.

Something I’m not too sure on is combat pacing. It’s described as “a preference to set on your filters in Quickplay”. It sounds like it’s replacing hardcore, but there are three different settings, Tactical, Standard, and Blitz. The descriptions Greg gave us seemed to lean that way, but I’m not completely sure of everything. I’m interested in what it could be, but until we see it in action I’m cautiously optimistic, especially as a hardcore player. Being Call Of Duty, we can expect a bunch of new modes, and the biggest addition is going to be Champion Hill, a mix of battle royale and Gunfight mode. We aren’t allowed to talk any more than that about it, but I feel like this one is going to be a major draw for players. 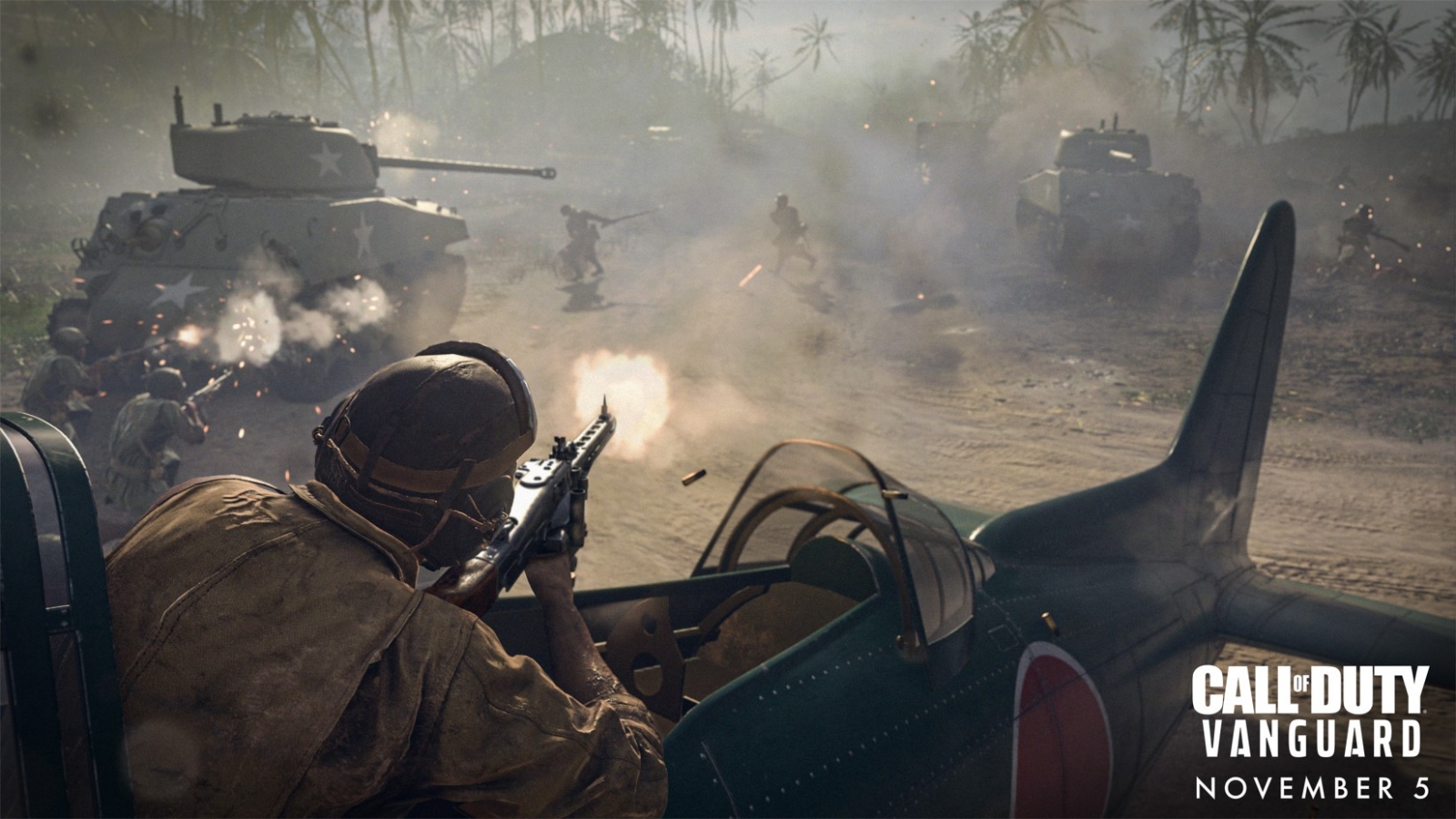 The last things we have to cover involve the current pillars of Call of Duty, Zombies and Warzone. First, Zombies is being led by Treyarch, and for the first time there will be a crossover in Vanguard featuring a story that is a prequel to Black Ops Cold War’s Zombies. As for Warzone, yes, there’s going to be a brand new map with a new metaverse, but what is going to make people even more excited is that anti-cheat is in fact making its way to the new map when it launches. This has been a hotly requested feature, and it’s a big deal that the massive success that is Warzone will finally have a way to combat the hacker community that is killing the fun for other players.

There is probably plenty more that I could have told you about through this presentation, and there’s definitely a lot more that I don’t know. I probably heard just about every buzzword from the Call Of Duty playbook, but in the end I left extremely positive on where Call Of Duty: Vanguard and Warzone are headed. Yes, we’re going back to a timeline that has been invaded so many times, but as long as it’s done like this, searching for original stories and building a fun to play game, I don’t mind in the slightest. We’ve got a little ways to go until launch, but what we’ve seen today is miles ahead of the doom and gloom we heard from leakers a few months ago, showing that when you hunker down and work hard great things can still come. Speaking of launch… Call Of Duty: Vanguard will be heading to war on November 5th, 2021, and will be available globally on PlayStation 5®, PlayStation 4®, Xbox One®, Xbox Series X|S, and PC via Battle.net!