The apocalypse is coming and it’s going to take an unexpected team to stop it. A fallen angel and a demon, each for their own reasons, take it upon themselves to stop the end of times. Even though they come from different places, they realize their only chance of success is to fight together. The demo may not have been long, but taking control of warriors from heaven and hell feels exhilarating.

The story boils down to the four horsemen of the apocalypse showing up on Earth, signaling the end of times. Harry the fallen angel and Judy the demon both decide that it’s not the world’s time. The best way to stop the apocalypse is by hunting down the four horsemen and eliminating them. The demo only features a few levels that involve you chasing after Pestilence in a Western setting. I really like the choice, since the character and the setting fit well together. As we know, the Old West had plenty of sickness, diseases, and bugs, which all coincide with Pestilence. I’m hoping that the other horsemen have levels that relate to their symbolism as well because that would emphasize their unique themes. 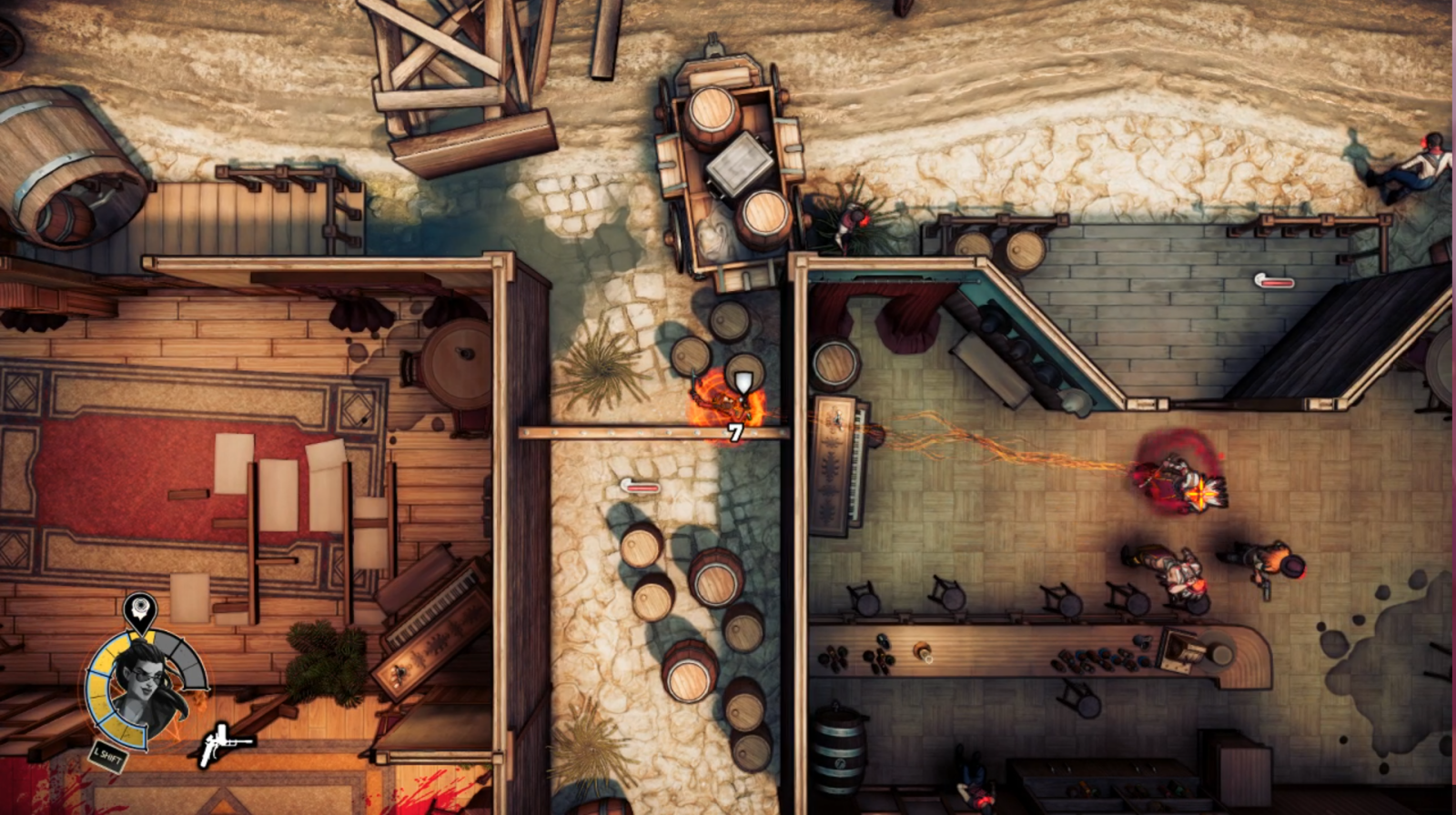 The gameplay is reminiscent of games like Hotline Miami, which I thoroughly enjoyed. You play top-down and make your way through the levels, defeating enemies along the way. Most enemies die in one hit, but some can take a few hits before dying. The downside is that you die in one hit as well, which adds more of a challenge. It causes you to plan your moves more strategically in order to avoid death. At the same time, reaction speed is incredibly important, as you’ll never know what could go wrong. This leads to some fast-paced action and exciting combat. For those familiar with Hotline Miami, you already know how brutal this type of gameplay can be; that being said, wiping out groups of enemies in tense situations feels incredibly rewarding. Thankfully, there are occasional checkpoints, so you won’t have to start the entire stage over again. Having to restart a checkpoint multiple times can be annoying, but you learn from your mistakes and use that knowledge to your advantage.

Harry and Judy both have a melee attack, a movement ability, and three special abilities. You can also pick up ranged weapons from enemies, including guns and hatchets. Harry uses a sword and can dash through broken walls, while Judy uses a chain and can teleport through fences. The special abilities use energy from a meter around the character portrait. You gain energy by killing enemies or sometimes from breaking crates. Harry can turn invisible for a short time, stop time temporarily, and send out a force wave. Judy can temporarily mind control an enemy to turn them on their allies, launch a black hole, and send out clones of herself to distract enemies. Whichever ability you have selected is labeled on the meter to signify its cost. For example, if invisibility costs six bars of energy, the eye symbol will sit next to the sixth bar. 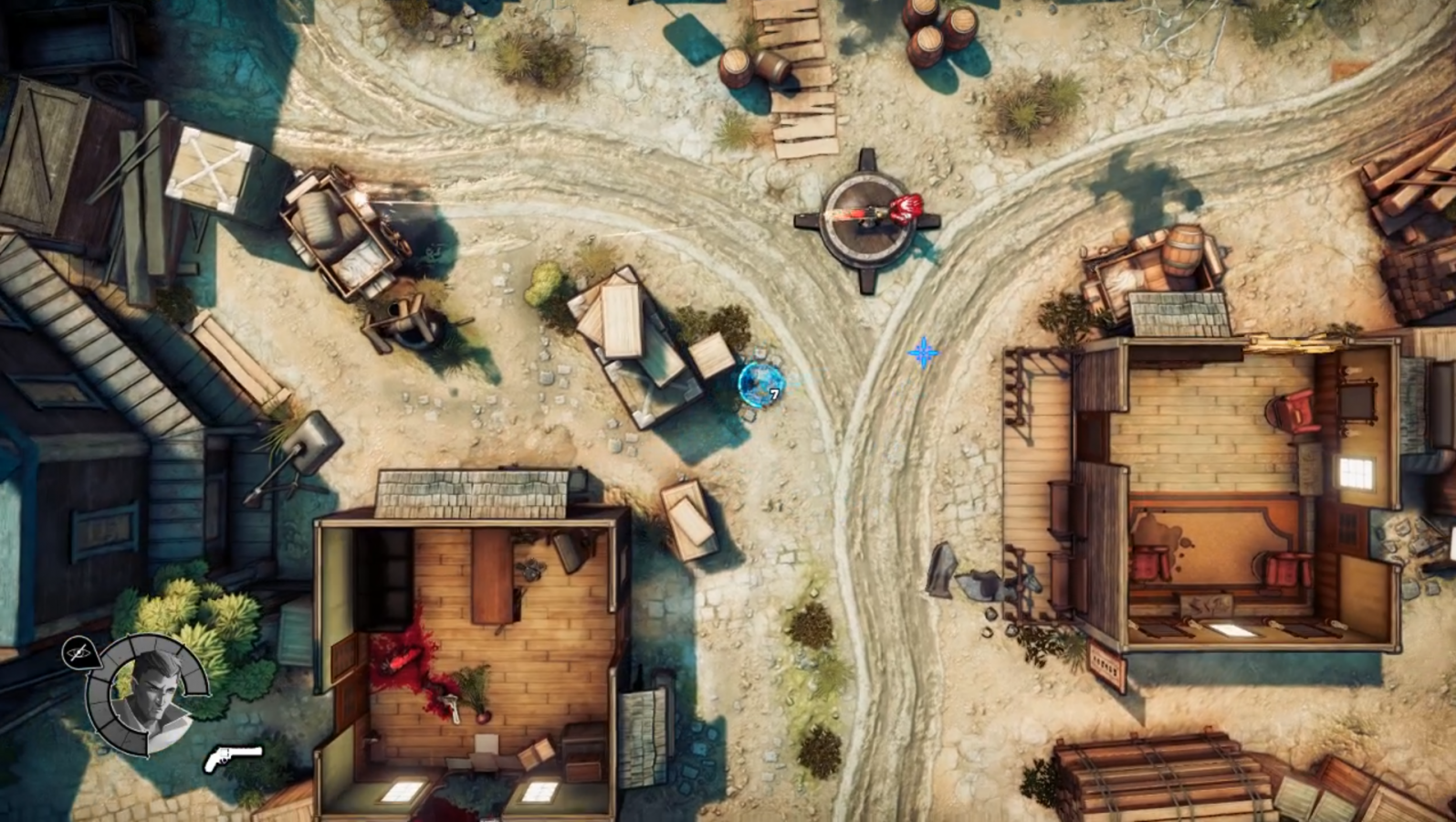 As you play, you’ll level up and unlock upgrades. Each ability has its own upgrade tree that unlock as you level up. For example, mind control might get the first upgrade at level one, but the next one might not unlock until level four. You have three choices in each upgrade; they include some combination of reducing the cost to activate, increasing range, increasing area of effect, increasing the duration, etc. You can respec the upgrades between levels at no cost, which I found interesting. It allows you to test out different setups until you find what works best for you or for the level you’re starting. Perks are obtained as you play, including from chests. Each character can only equip one perk, but there are some nice options. I personally opted for one that allows me to absorb one extra bullet before dying. It saved me plenty of times. I do want to mention that when I started the demo, my characters started at level eleven, so I didn’t have the full experience of starting from level one.

The game has a local co-op mode, but I only focused on solo play. God’s Trigger makes sure that you don’t miss out on both characters when you’re playing solo. By pressing the Q key, you can instantly swap between Harry and Judy. They are each better suited for different scenarios, so this feature is incredibly helpful. I loved getting to change-up my strategy based on the situation. It feels like a tag-team sort of combat, allowing both characters to make up for what the other lacks. 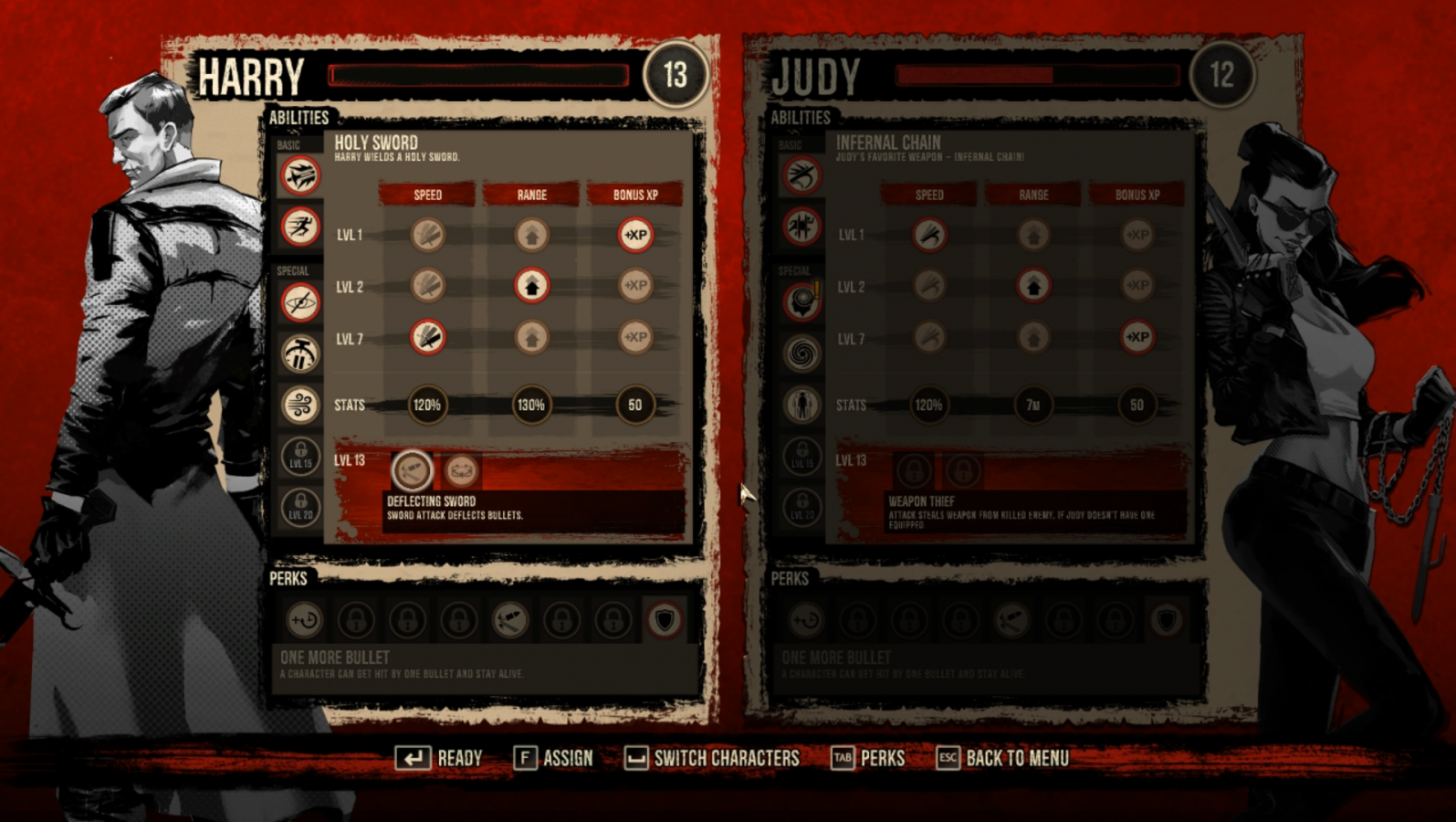 As for the sound design, it kept me immersed with no problems. The voice acting from Harry, Judy, and enemies alike are all clear and feel real. The sounds of combat are crisp and dense in a way that might make you cringe a little, but not in a bad way. The background music sets the tone of the levels and the game as a whole. The combined feeling of tense action and slight moments of respite are all captured as you work your way through the levels.

God’s Trigger’s demo was only four levels long, but it gave me a great idea of what the rest of the game will be like. When it ended partway through chapter one, I have to admit that I was disappointed. Not because I wasn’t enjoying the game, but because I was bummed that it was already over. I didn’t want to say goodbye to Harry and Judy yet. On the bright side, they’ll be back on April 18th, and I can’t wait to join them in their quest to stop the apocalypse once again. When the time comes, I’ll be ready to lead Harry and Judy as we let nothing from Heaven, Hell, or Earth stop us!