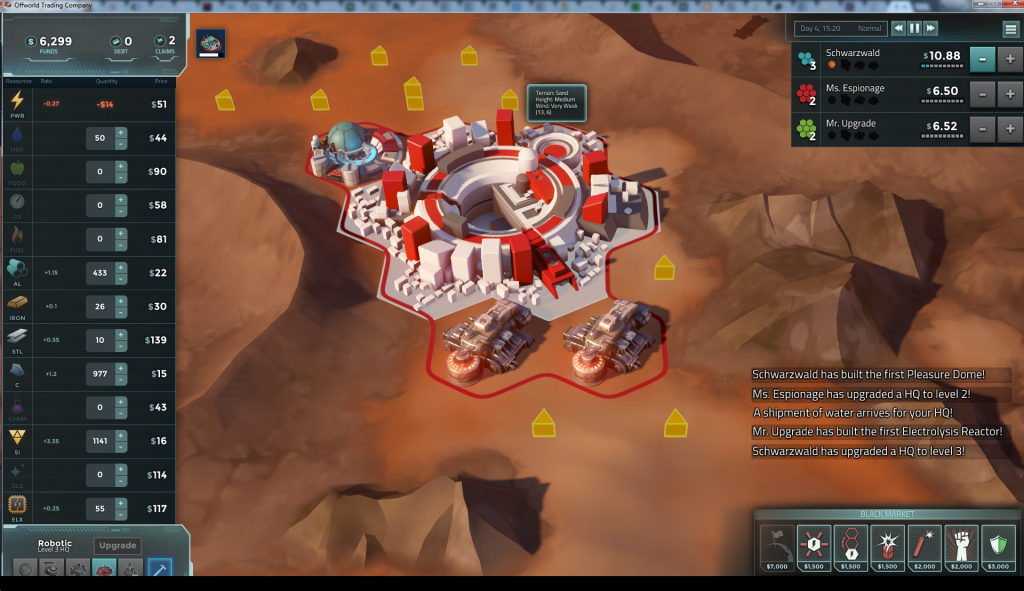 Take a real-time strategy game, complete with live head-to-head multiplayer. Yes, as usual, your goal is to absolutely dominate your opposition and be the last man standing – but this time, things are different. You’ve got no ravenous horde of alien beasties to send swarming at your opponents. Or high-tech military gunships. Not even some vikings! But you do have something your opponents fear more than all of those things put together: the ability to absolutely destroy the price of steel at any time. Which you do, repeatedly, while progressively working your way towards a hostile takeover of their respective companies. What we have here is a quick sky-view summary of Offworld Trading Company, courtesy of Mohawk Games and Stardock Entertainment. It’s currently in Steam Early Access, and it’s shaping up to be not just the beginnings of what feels like a new RTS genre, but it’s doing so while actually bringing fun to the table. Making a new genre? Easy. Making it enjoyable to play? That’s more of a trick.

A distinct lack of windows, but really – if you’ve seen Mars once, you’ve seen it a million times.

The backstory of Offworld Trading Company is straightforward – humanity went to Mars to colonize the planet, and the effort failed miserably. Now we’re giving it a second go, except this time around we’re trying it with private corporations rather than some idyllic United Nations routine. Except it’s not just a single company that’s won the rights to the mineral-gathering land-grabbing, but a variety of companies – and they’re all on a mission to out-perform, out-produce, and ultimately conquer their competitors. Add in a bit of regulation, an otherwise open market, and a heavy helping of market-manipulation and other underhanded tactics, and hell… now you have yourself a game. The entirety of the competition in Offworld Trading Company is economic in nature – even the more aggressive aspects like ‘sabotage’ ultimately come down to targeting disabling of enemy manufacturing facilities, carefully timed to shut them out of production while you make your moves on the market at large.

The real meat of the game centers around the various commodities that can be harvested or produced in your newly staked out martian territory. There are the fundamentals, like oxygen, food and energy on the simplest end of the scale. On the other end, there’s electronics, the production of which requires a lot of investment and a variety of resources to make (silicon, glass, carbon, etc). Other than the most basic resources, most of these need to be harvested from the planet surface, where they are scattered around in various clusters of intensity – and each unclaimed resource can be claimed by any other player that sees them and who stakes one of their (limited number of) claims on the area. The further the distance the claim from the player’s home base, the longer it takes to retrieve harvested/produced goods – but at the same time, once a claim is staked, it’s typically taken off the table entirely for other players. While all of this is going on, the prices of commodities on the market are fluctuating, responding to the actions of all the players as they buy and sell. If everyone is buying out steel, the price will start skyrocketing. At the same time, if someone dumps a massive amount of commodities on the market, they become insanely cheap for everyone.

While the commodity production and manipulation is the heart and soul of the strategy in Offworld, there are other tools at a budding company’s disposal. Opponent’s factories can be sabotaged, or their workers can be stoked into an uprising. There’s an upgrade race that carries on with the corporate headquarters, unlocking more and more claims that can be used to build additional factories on precious resources. There are patent wars to fight, bidding wars that take place over opportunities, debts that can accrue, prices that can be artificially manipulated by malicious means.. in other words, a very broad range of dirty business tricks that can be relied on. And during all of this, players have to deal with the ever-present threat of being bought out by one of their rivals – a prospect which becomes far easier for an opponent to pull off if they just wait for business to go south for a little bit, and for what was supposed to be temporary and tactical debt to pile on up.

Gameplay-wise, Offworld feels very ‘complete’ as it is. I’ve been playing entire games from start to finish with minimal interruption, though so far the AI has seemed a little bit on the easy side. Human versus human play has eluded me so far, but the game seems as if it’s going to be absolutely frantic to play against living, breathing opponents. What’s really surprising is that, even without the more traditional aspects of an RTS being present – there are no soldiers to build and deploy – the game still manages to demand considerable moment-to-moment attention. It’s important to keep tabs on just what commodities you and your opponent are both focusing on, the market prices at the moment, what commodities are available and where they’re located, and more. Graphically, the game is a bit on the plain side – headquarters are represented by stark monochrome buildings that aren’t adorned with so much as windows – and the audio is particularly lackluster. Considering the rest of the game seems solid in both concept and execution – and again, this is expressly an Early Access title, from a respectable publisher – that’s less of a concern.

All told, Offworld Trading Company is shaping up to be a solid contender in the general RTS genre. While the fundamental concepts and focus of competition remains solid, the ultimate test will be seeing if Mohawk Games is able to pull it all off while keeping the conflict appropriately balanced, rather than becoming a predictable click-fest with only a narrow variety of viable options. For now, though, it’s definitely a title worth keeping an eye on, at least for any gamer looking for a new take on strategic multiplayer competition.