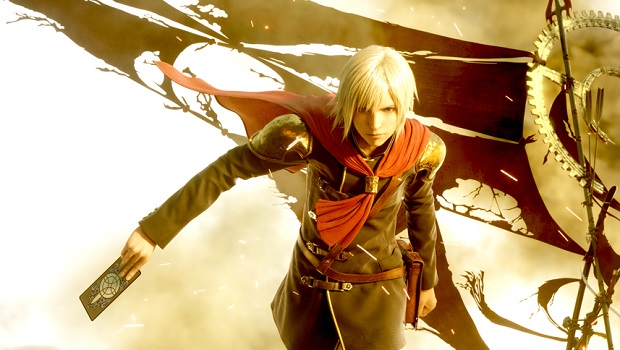 As earnest of an attempt as Square-Enix made in bringing Final Fantasy Type-0 to the States, the PlayStation Portable game’s transition to HD only magnifies the cut corners seen in a handheld game. What might have been a fine game on a PSP is filled with issues that may have been caused by the game’s transition to consoles, but many of which seem to just be inherent to the game’s design and direction.

Type-0’s opening moments hint at a more war-torn and gritty Final Fantasy than the series is known for. Civilians are seen slaughtered in the streets, while soldiers are forced to watch their brothers-in-arms die, resting on the backs of dying chocobos. You’re led to believe that Type-0 will find a darker place for the series that forgoes Final Fantasy’s occasional silliness and lighthearted humor, and for what it’s worth, the game does have an interesting perspective of survivor’s guilt and the weight of war on soldiers. However, Type-0’s inability to convey much of its weightier themes comes from a deeply rooted problem it has with exposition and establishing potentially interesting characters.

Type-0 makes a poor first impression in its first hours as it begins bombarding players with pages of jargon that it takes no time elaborate on, frontloading the game’s opening moments with tons of information, but with little exposition. Rather than making an effort to weave explanations into its narrative, Square-Enix treats players to documentary esque slideshows narrated by a disembodied voice, but never bothers to clarify the cause for the war you’ll find yourself thrown into, nor the roles that most of the people you’ll see play within the ongoing battle you’re participating in. This isn’t helped by poor cutscene pacing and moments where some events seem to be cut short, even as dialogue is still going on. Entire events within Type-0’s narrative go unseen with Square-Enix being content to tell, not show, important moments well after the fact.

To its credit, Type-0 does try to use the naiveté of the game’s player characters in order to have them ask questions and get extra clarity. Throughout the story, you’ll play as a group of 14 students collectively referred to as Class Zero. These kids are part of an elite set of soldiers that, under the orders of a woman they all refer to as their mother, embark on missions assigned to them as part of their attending a school called Akademeia.

Each member of Class Zero specializes in a different fighting style, but outside of their combat capabilities, Type-0 does almost nothing to make nearly any of them stand out as characters. The game’s plot only allows for focus on a select few of them, while the others are boiled down to one-dimensional characteristics and their respective fighting specializations. The game’s bloated cast is made all the more apparent by how arbitrarily characters are swapped in and out of scenes in order to make appearances and carry on the illusion that every member actually has a distinct personality and role within the group. It makes Class Zero feel more like a hive mind rather than actual individuals.

What little emotional involvement the characters have with one another is often robbed of any sort of meaning by the game’s cast-wide stilted voice acting. Somehow, every single line is delivered without any sort of sincerity and comes off as incredibly wooden. In the moments that a character’s perfomrance is more passionate, it often feels like overreaching. Type-0’s performances never hit a middle ground of believability, and are often cringe-worthy.

Type-0’s incapacity to establish a genuine connection between player and its characters cuts off many of the game’s more interesting themes and relationships at the knees, and leaves much of its worth up to its action-oriented combat. Type-0’s set up has players taking all 14 members of Class Zero into graded levels that require players to adapt to multiple playstyles rapidly, as you’ll often play as all 14 of them in any given mission.

Players start out with a base party of any three members they choose, each of which will be replaced by another Class Zero member as they’re taken out, with defeated characters being out of commission until the end of the level. As such, you have to be comfortable playing with any of the characters, as you never know when you’ll have to change from your favorite to one you’re less skilled with. How quickly characters can be taken out makes it difficult to specialize, and actually makes doing so counterproductive. Type-0 requires that you adjust to what you have access to, rather than how you actually want to play. Some characters are more adept at magic and ranged abilities, while the more tank-like characters are capable of taking out enemies at close distances. You’ll never know what you’ll be stuck with, so you have to learn the basics of each character at the very least. This setup makes Type-0 a punishing game, but never one that feels unfair. The size of the cast allows for some pretty varied fighting styles across the board, even if it consistently prevents the narrative from gaining any substance.

The game’s action combat is fast-paced, and sometimes can be a lot of fun. Losing your favorite character for a mission requires you to experiment with other members’ playstyle, and each play distinctly enough to make the act of playing as any one of them interesting, helping to keep the game from ever feeling too repetitive. However, while Type-0 has a pretty solid foundation for a great battle system, playing it with a controller that has two analog sticks proves to be the remaster’s greatest undoing, as the game’s camera seems to have gone unadjusted for analog control.

Despite being able to move the camera with the right analog stick, you’ll still have to fight against it as it constantly repositions itself behind the player’s back, rather than staying where you leave it. This constant power struggle between you and the camera’s default position makes combat an ongoing hassle, preventing you from ever being able to simply move the camera as long as you’re in motion. You’ll even see the camera shaking as you walk through small corridors as it tries to stay at your back, making it sometimes difficult to navigate your way through missions, or even in Akademeia when you’re not in combat.

Outside of missions, you’re given free time to socialize with all of Class Zero,  as well as take on side missions. While these conversations and sidequests help you gain experience and supplies, each of them feel completely insubstantial and indicative of the game’s handheld roots in that they’re conducive to short bursts of play. It’s not helped that missions are bogged down by extensive backtracking between the game’s hubworld and Akademeia, making them feel more tedious than a meaningful use of your time.

In the jump from PSP to consoles, Type-0 has gotten a pretty significant facelift. Along with upscaling the game to a resolution appropriate for a television, the members of Class Zero each get new models and the game’s environments have also been touched up. This is all at odds with the fact that most of the NPCs in the game still retain old models from the handheld version, making the game’s lack of visual parity jarring and especially apparent during dialogue between characters outside of your party. Even after the visual update, much of the PSP’s animations seem to still be in place, with many characters coming off as stiff as many of the same animations are repeated throughout.

When you haven’t played Final Fantasy Type-0 as it was initially developed on PSP, it’s hard to gauge how much of the problems that are found in the HD remaster are native to the source material and how much of it comes from the process of bringing a game that was clearly not built to be a console game to your television. But ultimately, it doesn’t matter either way. Final Fantasy Type-0 HD is an incoherent and frustrating mess regardless of whether it was that way originally or not.

No amount of visual updates can mask the fact that Type-0 was clearly never designed to be on consoles. What great ideas it has are buried under a story that’s rendered meaningless and a camera that prevents you from seeing most of them in the first place.