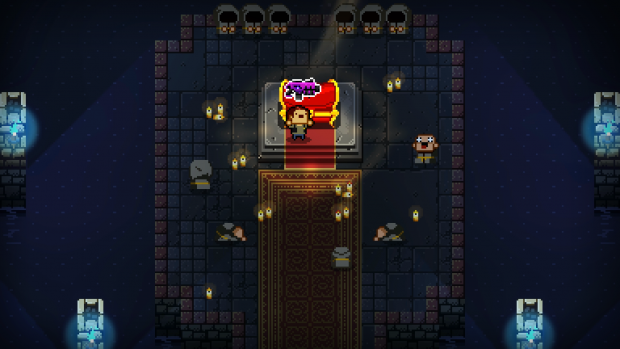 There’s something incredibly addicting about roguelikes. Whether it’s the overwhelming odds or the encouragement that comes from climbing up the learning curve, there’s a satisfying quality that stems from the idea that the next attempt is likely to go slightly better.

Enter the Gungeon has that quality in spades. Inspired by The Binding of Isaac, Enter the Gungeon is a procedurally generated dungeon crawler that constantly forces players to adapt. As a twin-stick shoot-‘em-up, players select a hero and attempt to progress as deep into the Gungeon as possible, avoiding an increasing barrage of enemy fire while dishing it out themselves. Map layouts, enemies and power-ups are entirely randomized, so while the core mechanics remain familiar, the ever-changing parameters allow players to grow their skillsets rather than learning to exploit the game. As the developers put it, “players get better at the game, not at the boards” – and with the challenge that Enter the Gungeon brings, mastering the game is critical to succeeding.

Of course, players never feel ill-equipped to handle each Gungeon’s hellish assaults thanks to a great array of moves. Heroes may enter a room and quickly become inundated by an army of enemies, only to dodge roll out of fire and flip a table to take cover, all with a press of a button. And for those situations when fleeing just isn’t possible, clicking L3 and R3 simultaneously allows players to fire blanks to explosively clear out all enemies within a nearby radius. It’s intense and players never stop feeling like a total badass.

Helping to complement Enter the Gungeon’s empowering nature and varied experiences is a huge selection of weaponry. Over 200 unique guns are available, and with all weapon chests containing a random gun, there’s a huge element of surprise and acclimation each time you play. During my play session, weapons seemed to vary greatly, ranging from powerful Gatling guns capable of all-out offensive assault, to the silly yet fierce Cactus gun that quickly sprinkles foes with piercing needles.

Pairing weapons together is also a strategy unto itself. While only one gun can be used at a time, some guns may prove useful to switch between for maximum effectiveness. The example used by the developers at Dodge Roll involved a gun capable of spraying gasoline, followed up with a flamethrower that can set the room ablaze. With such a wide variety of weapons available, there is huge potential for some devastating combinations available to creative players.

My play time with Enter the Gungeon was brief, but gave the perfect example of what to expect from the game’s action-packed bullet hell. Even though I died on only the second floor of the Gungeon, I concluded the session feeling much wiser as a player and anxious to give it another go. Enter the Gungeon looks to excel at empowering players and creating a fresh experience each time it’s played. Look for it on PS4, PC, Mac and Linux in 2016.

For more on Enter the Gungeon, as well as all of our PSX coverage, be sure to check back to Gaming Trend.