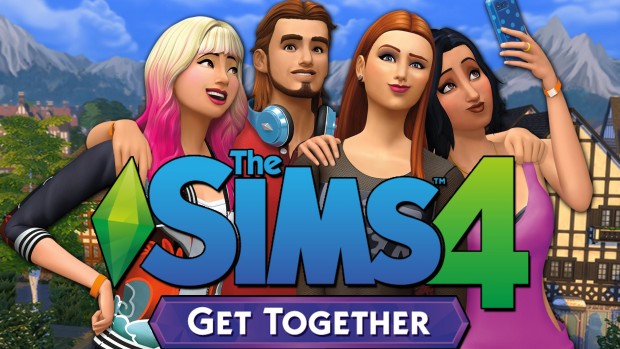 The Sims 4 had a less-than-stellar launch, and was missing many gameplay features Sim-heads were looking for. Through patches and updates, many missing things have been added to the base game, and The Sims 4 is now on its way to becoming a staple of the Sims franchise. Adding new features, items, and ways to play, the Get Together expansion, has some great ideas but falls short of being amazing.

The biggest feature of Get Together is its clubs portion. Being able to join a club, or even make your own, has some great effects on how you play. You can join up to three clubs at any time as long as you meet the requirements. There are clubs for children who love to play and use imagination, popular clubs that are snooty and like to try on clothes, clubs that love the outdoors, and so much more.

The system is streamlined and simple to use, but has a surprising amount of depth. All clubs have unique rules or requirements to join, such as having a certain skill over level two, or starting a fight with a rival gang. While in the club you have to follow the rules set forth, or you’ll make the other members mad. It is a great way to socialize and make new Sim-friends with the same likes or dislikes.

Each club can also have a clubhouse, which can be a cafe, nightclub, or the new ruins, where your club meets up. You can even add doors that are locked to anyone who is not a member. If you love building, you can even build your own clubhouse, which is extremely rewarding, and add all the stuff your club likes. The simplicity of the club system feels amazing, and is easily one of the best mechanics any Sims expansion has put out.

You can also create your own club that pays off for your Sims in more than just social ways, like with boosts and perks.. You can choose what your club likes to do, such as a fishing club who love to fish and read, or a goth club that drinks coffee and has a sad vibe. After playing with the system I can confidently say it is well done and has mass potential. In no time I had created a fight club that fought, was angry, and hung out at a bar.

You can choose what the club does, what they are allowed to do in a meeting, and what is disallowed. In my fight club, which I named “The Sim of All Fears,” we loved to fight, be nasty, and skinny dip, while disallowing any flirting, listening to music, or dancing. There are so many options, that I found myself going from what made sense to having fun and creating scenarios that were more engaging. The system is robust, but still user-friendly and allows you to make clubs that play how you want, which becomes an extremely powerful tool.

There are also great perks to having or being in a club. One of the best uses of clubs I found is to find Sims to get things done for you. If you have a messy Sim or house, create a cleaning club that loves to fix things and tidy up your house. Get a gathering at your house and watch them clean and fix up your house for free. You can also buy club perks as you gain points and unlock things like size, vibes, and boosts. This is where the club system gets helpful for moving your Sims forward. Having the flirt vibe on can help your Sim mingle and possibly find a spouse, while having a boost active will help with upgrading your skills. If I wanted to max out the new DJ skill I simply made a new club, bought a turntable and bought that boost. In no time I had fully leveled, but more importantly, my sim had made friends, traveled around the town, and even had some great stories in my Sims world. That is where the clubs really succeed: you can use them to get what you want, but it integrates it into the world in such a great way I found myself loving clubs and using them all the time.

There are, however, a few problems I ran into with clubs. The simplest thing is the lack of icons; it may be small but I felt let down having to use the same DJ icon as the default group, even though my club was rivals with them. I also wish there was a better way to have a hierarchy with a leader, rather than something like managers, so you could work your way up the ladder much like how the careers work in the Get to Work expansion. Although these are small I wish they were implemented. The last complaint could be a deal breaker, it all revolves around clubs, and only adds a few new items that are not club related. If clubs do not interest you, there is little to none that will excite you about this expansion.

Although clubs can work even if you solely play as a family, clubs revolve around social aspects, which means you might need to leave your comfort zone to get the full experience out of this expansion . I found ways to love the Sims clubs, but for a new player to the series, it doesn’t have as much content compared to the Pets expansions or a work-related expansion. It seems to be aimed at the hardcore Sim players, and doesn’t do much to pull new players in. What it does, it does well, but I don’t see this bringing in new players or players that haven’t made the leap from the Sims 3 to 4.

Not only with clubs, but there are also new items and features in Get Together that I thought were well implemented.  Of course there is the mandatory furniture and clothes that do not do much to gameplay but there are also great additions that make this expansion shine. The new walk-in closets are great for trying on clothes and picking out wardrobes, and the jumping platform allows your Sims to swan dive into the pool. There are also more practical things, like the DJ booths that go with the new DJ skill. These can start out simple, but as you level your Sims you can  upgrade these DJ sets to have lights and displays. The DJ skill itself is also fun and allows you to make tips, hype crowds, and get Sims dancing and socializing. Also included are dance floors, which can even light up and bolster the new dancing skill. You can now choose to show off new moves as you level, have dance offs, and even do perfectly synchronized dances with your club. Both the DJ and dancing skills are great additions to the current set, and allow great ways to show off and interact with Sims.

There are also interactions with these items that have some great use, such as the ability to urinate or nap in the bushes when no bathrooms are available, or make-out and woohoo in the walk-in closet when other Sims are around. My favorite of the new items has to be the bonfire where you can hang out with your club, play guitar, or even burn items in your Sim’s inventory. The new items that are in the game are well executed, but I was let down by the number of items included and would have liked to see more.

The last big feature in Get Together is the new town of Windenburg. Inspired by Europe, this town has a nice mix of modern and historic places. All the new places have items that go well with the clubs aspect, such as a nightclub with a dancefloor and DJ booth, or great fishing spots that suit a bonfire party perfectly. The town really does shine and has amenities such as cafes, haunted locations, and old ruins which are perfect for exploring. Just like in previous expansions the town really showcases the new features to the best of their abilities, but Windenburg is something even more special — it inspired me and gave me a sense I was in a new part of the world, not just another town. It is laid out very neatly, and is set-up well for having a night out. No other Sim town has felt so memorable in the past, and the developers did a great job making a town to not only show off the clubs and new features, but just added a great new location to the Sims in general.

The Sims 4: Get Together

The Sims 4: Get Together utilizes the new club system to have new experiences, ways to play, and is a great social feature. Although it is a great expansion and allows for new and exciting gameplay, it fails to bring enough to the table for new players or people looking to get back to the Sims franchise.

Growing up in a small Colorado town, Bryan has always had plenty of time to play games. PC is his first choice of tech followed by the PS4. Graduating at 16 Bryan knew he wanted to be a writer and wanted to combine his love of games into that and found Gaming Trend in 2012 where he quickly became a member and started writing for them as soon as he could. He is still at Gaming Trend, but now has 2 kids, a puppy, and a lot less time to play the games he loves, but he always finds a way to get back into gaming.
Related Articles: The Sims 4: Get Together
Share
Tweet
Share
Submit