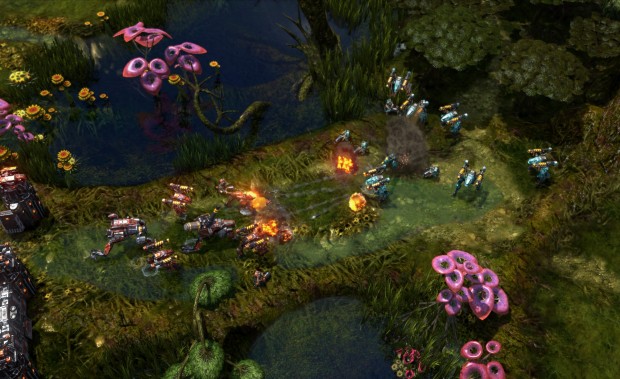 The RTS genre is one that I think is desperately in need of reinvention. Not considering a few really great titles, the genre has laid stagnant for a very long time. There hasn’t been a transfusion of new ideas or a developer really wishing to push this style of games forward in a significant way in a few years. While I don’t think Grey Goo is the revolutionary title the genre needs to reinvigorate itself, it does admirably bring some new ideas to the table.

To be perfectly frank, when I first started the campaign I wasn’t really impressed. The story throws around a lot of things and expects you to keep up without fully explaining what is happening. I haven’t delved too far in, so maybe it gets better, but that’s not what I saw. It definitely has the potential for something, there just wasn’t anything especially spectacular about what I saw.

That lack of surprises translates to the gameplay. Starting the game, I felt like I was just going through the motions. There are a few somewhat unique touches to the base building, like the ability to drop hubs across the map to build structures, but nothing that really gave the oomph I was looking for. Everything I did I felt like I had done in other games like Command & Conquer or Starcraft a million times before, especially because everything feels overly simple.

There’s really not much here I haven’t done in other games already.

There’s only one resource to collect, the variety of units is low, and the way you push your group forward technologically is fairly generic. Because the story and gameplay weren’t capturing me very much, I decided to head for some skirmishes to try out the different races available for play. There are three… aliens called the Beta, us Humans, and the really special one called the Grey Goo. Where the Humans and Beta don’t explore many new gameplay dynamics, playing as the Goo immediately captured me.

There’s no base building when you play as the Goo. Instead you start the game as a giant blob of the titular substance and start roaming around the map. Your objective is to build up your initial blob (called a “Mother Goo”) so that you can split it into other blobs that you can use to create units or “research” new tech. It’s really fun, because it creates a very mobile experience where you’re trying to keep track of all the pieces of a puzzle you’re assembling at different places.

The greatest bit in my opinion of course is when the armies of your enemies come running at you. You have the same standard unit types as the other factions, but your “headquarters” (your Mother Goos) are also powerful methods of attacking even if they move fairly slowly. Just roll them over other units and the Goo will absorb them… it provides me with a particular source of glee as I see all of my enemies disappearing into the Goo as my slow moving grey blob consumes everything in it’s path.

The mobility and unpredictability of this faction is doubtless the greatest facet of this game, and while I haven’t played the game to it’s fullest just yet, but I can’t wait to see if the later stages of the campaign really take advantage of the ideas I explored in skirmish battles where I played as the Goo. The mobility of the faction changes the way the game is played, and it’s the only time while playing that I didn’t feel like I was just playing an amalgamation of ideas from the past.