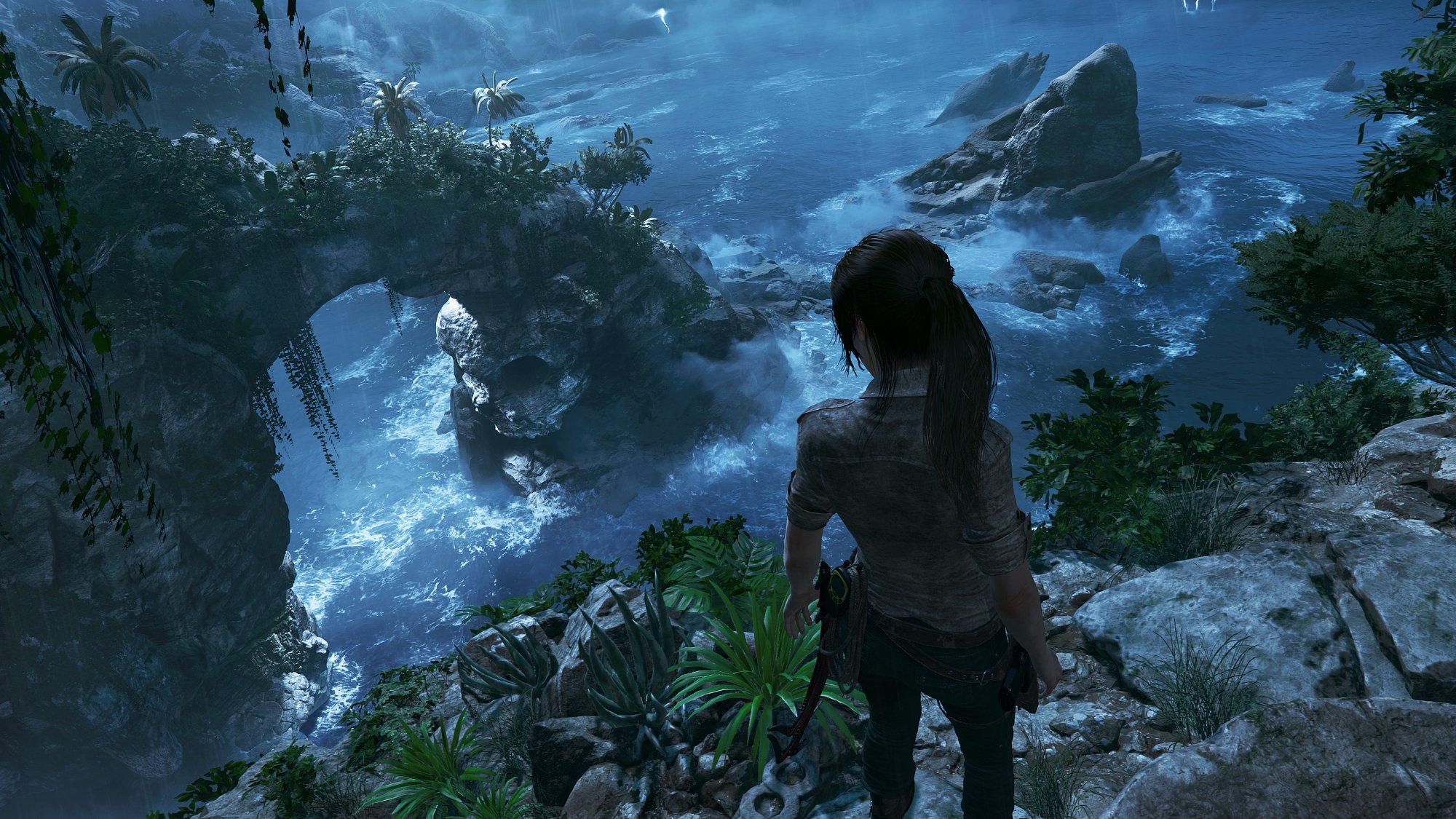 I got some quality hands-on time with Shadow of the Tomb Raider, which opens where Rise of the Tomb Raider left off, and Lara is plotting her next move. She’s figured out the location of the Hidden City has to be, but Trinity is already there. After donning a sugar skull mask and cowl, so as to blend in with the festivities around Día de Muertos, Lara stealthily gathers intel before sneaking past Trinity’s security, infiltrate an underground tomb, and acquire the artifact at its heart before they are able to. The game is butter smooth, seamlessly transitioning between cutscenes and gameplay, and does so in gorgeous 4K.

While finding the first tomb wasn’t terribly challenging, the narrative itself immersed me in the action, getting inside required no small bit of dexterity and planning. Lara is, fortunately, athletic enough to leap across chasms, cling to walls with her pickaxe, repel down drops, and build up momentum to swing herself to far ledges. Even I, a relative stranger to the Xbox controller, found the button mapping to be simple and pretty easy to get used to, but skillful button use alone isn’t enough to stay alive. Shadow of the Tomb Raider will constantly test your observations and reactions, requiring you to think on your feet to spot nearly-hidden ways forward as you overcome ledges which crumble under your hands and feet, bats which fly at you and threaten your grip, and traps hidden by the ancients. While exploration this early on was pretty linear Eidos Montréal really did make everything feel dangerous, building suspense, causing you to react, and always keeping you on high alert.

If Rise of the Tomb Raider brought tombs back to the game, Shadow makes them come alive. The first tomb is massive, ancient, and every bit as deadly as you’d hope, and I was hardly inside before a flooded chamber signaled the return to a long-forgotten Tomb Raider tradition: Swimming. Far from a relaxing day in the sun, diving is a tense experience, requiring you to navigate passageways, collect underwater items, struggle through claustrophobic openings, and do all this while managing your breath. Brief cinematic scenes, woven right into gameplay, add a great deal of suspense and tension to the entire experience, as Lara struggles through tiny passageways, starts as eel-like fish snap their jaws threateningly in her face, and moves in panicked, jerky motions with the need for air. There isn’t a visible breath bar or meter while diving, but a combination of visual and audio clues do a brilliant job of signaling when it’s time to surface, and I wasn’t the only one anxiously holding my breath while playing.

Observation, resourcefulness, timing, and reflexes are all equally important for Lara’s unique brand of archeology. Suspended platforms slowly sink under her weight, and timing can mean the difference between catching a ledge, the disturbance causing the sound of an ancient bell to echo throughout the dark chamber, or plunging to a rocky death leagues below. Arrows become tools, allowing Lara to attach a line to rope-wrapped beams, creating zip lines or giving her leverage to destroy some of the less ancient, more rickety structures within the tomb.

In the belly of the first tomb lies a massive mural which depicts three great tragedies: A tsunami, a storm, and an earthquake. Lara marvel at this before turning her attention to the stunning artifact at the temple’s heart: A jeweled dagger. Panicked by echo of voices, signaling that others are approaching, Lara grabs the dagger and runs, fighting her way out of the heavily guarded dig, as a powerful tremor wracks the earth under her feet. Lara has a number of weapons at her disposal, from her trusty bow and arrow and pickaxes to a shotgun, and Lara can switch between stealthily picking off isolated enemies while sneaking through the jungle’s ample foliage, or diving with guns blazing.

While all the messaging around this title says that Shadow of the Tomb Raider will be the game where Lara becomes the tomb raider she was meant to be, she’s still a victim of circumstance at the start. Sure, her high-energy, high-impact archeology skills are polished to a shine, but she still hasn’t grasped the bigger picture, and results in her to rushing in where even Trinity dares not tread. It’s not long before Lara is apprehended, and a terrible truth is revealed: By rushing blindly in, looting the tomb, and thinking only of staying one step ahead of Trinity, Lara has triggered something catastrophic, the impact of which may well doom humanity as a whole. It’s an exciting twist for the Tomb Raider series; it’s not simply good versus bad, as Lara herself has unwittingly triggered a series of apocalyptic events, and now must struggle to undo the damage she’s done.

During the event, I heard a lot about how these are some of the biggest maps ever created for a Tomb Raider game, and how players will have a whole lot of freedom to explore, choose their own approach to combat, and even use fear tactics to overcome their opponents, but little of this was present in the early part of the game. The experience was quite rewarding, beautiful, and filled with suspense, but also quite linear; there was generally only one way forward, and in such a confined space, it was nearly impossible to stealthily pick off your enemies without triggering a full-on firefight. This was an exciting and promising first look at Shadow of the Tomb Raider, and I’m hoping that E3 will show us more of the tactical jungle warfare which Lara is to master.