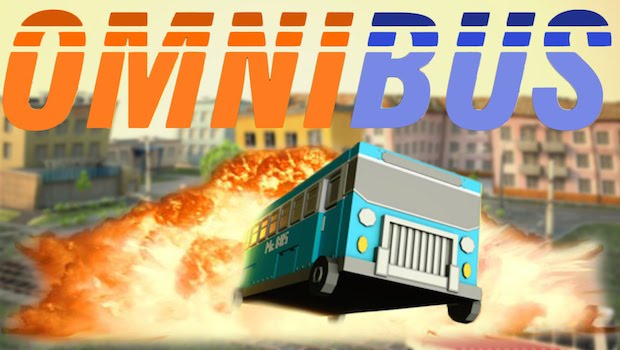 Heroes come in many shapes and forms. Some in capes, some in tights, some even in a squirrel outfit. Omnibus doesn’t need any of that though, as it is just that: a bus, capable of moving omnidirectionally and saving the day.

Omnibus is a new physics-based game that centers around the titular vehicle and his bus companions. There’s many problems that the world is facing, and only the Omnibus can solve them all.

You move through an overworld map, reminiscent of Super Mario Bros. 3, to select levels to play through. Each main hub has a theme, from a metropolitan city to the wild west, and even into outer space.

The Omnibus can only drive, so it’s the way in which you solve these different levels that creates some cool moments. Many of them involve some manner of bouncing off bumpers and jump pads to launch the Omnibus into a target.

In one level, I was launching the Omnibus off a giant ramp to take the head off a statue, in a fun callback to The Simpsons. In another, I was up against a number of banditos in buses, and had to pick up a power-up that surrounded my Omnibus with bumpers to bounce them off the plateau we were on.

Those bumpers and jump pads aren’t always a good thing, though. In one of my favorite levels, I had to drive up the side of a skyscraper to ram a giant monkey off the top, while avoiding the bumpers and launchers on the side of the building to stay vertical. In others, bumpers will bounce you out of the play zone, resulting in a game over and a restart.

A single play of any level can go from good to bad pretty fast, but the game lets you instantly reset and start again, alleviating some of the frustration of a bumper gone awry.

The style of Omnibus is also well-suited to the gameplay, with a mix of blocky, muted colors and retro-3D graphics giving it a simple and easy-to-interpret aesthetic, which you really need when you’re going 90 mph around an arena with three other busses.

Omnibus has a unique style and presentation to it, and with a bit of humor and charm behind it, it won’t be a surprise when this quickly becomes a streaming sensation. You can almost picture the videos of hilarious solutions to levels happening while playing it, and that’s a very good thing.

Look for Omnibus later this year on Steam for PC.