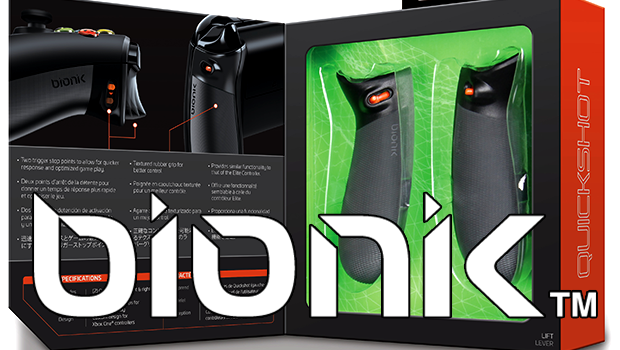 Gamers, both serious and casual alike, are constantly seeking to customize their experiences, aiming to improve their performance or to simply make their play sessions more convenient and more comfortable. A new company, Bionik Gaming, has made it their mission to provide improved experiences and immersion in gaming by bringing a host of sleek and practical third party gaming accessories to the market. Earlier this week, we got a first look at some of these accessories, including several newly announced add-ons for the Nintendo Switch system.

Perhaps the highlight of Bionik’s new add-ons are those for the Switch, which are not on the market just yet. The Tetra Power Dock appears both practical and flashy, looking quite like a piece of modern art when equipped with the more colorful varieties of Joy-Cons. This small tower both holds and charges up to four Joy-Cons at the same time. The Rapid Charge Kit, Bionik’s charging adaptor for the Switch, is slightly smaller than the official Switch adaptor, and features a detachable cord, 15v output and will retail for $25, $5 less than Nintendo’s official product.

For those looking to play on the go, Bionik offers the Power Plate, a portable battery specifically designed for the Switch. The battery features sliders which allow you to attach Joy-Cons in the same way they connect to the Switch itself. On a single charge, the Power Plate is capable of charging the Joy-Cons three times, or a Switch once. “I travel with two,” Crystal Dugan, head of marketing for Bionik, explained. “I love Breath of the Wild, and the Switch is just so power thirty.” The Power Plate charges through its own dock, and can be connected to the Switch via a USB C to USB C cable, allowing rapid changing the Switch even while being played. The Power Plate features an LED display, which allows you to easily switch between charging Joy-Cons and charging the Switch itself.

I also got to try out the Quickshot Grip for the Xbox One. Compatible with all Xbox controllers, except for the Elite Controller, the Quickshot features a textured grip and a throttle switch for the trigger. The textured grip not only makes the controller feel more stable in your hands, it also helps combat the sweaty palms which often accompany long play sessions. Turning on the throttle provides more resistance for the trigger buttons, allowing you more control over your FPS experience. The Quickshot is installed by prying off the outside of the standard controller grip, which is only slightly challenging, thanks to the included prying tool, and easily snaps into place. I sent a pair of grips home with a friend to try them out on an extended Titanfall campaign. He reported that while the throttled trigger didn’t seem to have a great deal of impact in heavy firefights, it feels useful for snipers thirsty for headshots.

The Quickshot has a textured grip and a trigger throttle, perfect for snipers

Finally, I got to sit down with the Mantis clip on-ear headphones for PlaySation VR. These speakers clip onto the headset and provide impressive sound without causing ear fatigue. I constantly struggle with finding secure, comfortable positions for most VR gear, since I have a smaller head than most gamers. I was impressed by how easy it was to adjust the Mantis to my ears, as well as by the quality of sound provided, even without the bulky, ear-encompassing headphones I’ve become accustomed to with VR.

The Mantis on-ear headphones easily clip to the PSVR headgear

While a few accessories are already available at their website, Bionik Gaming will soon launch a whole host of accessories, including but not limited to the products above, to give gamers more control over their experiences. Future add-ons include gear for the Nintendo Switch, PlayStation 4, Xbox One, Samsung VR, Oculus Rift, PC and mobile devices, with products ranging from ten foot, tangle-free braided cables for the Xbox One and PS4 to a compact VR power kit featuring break-away cables.