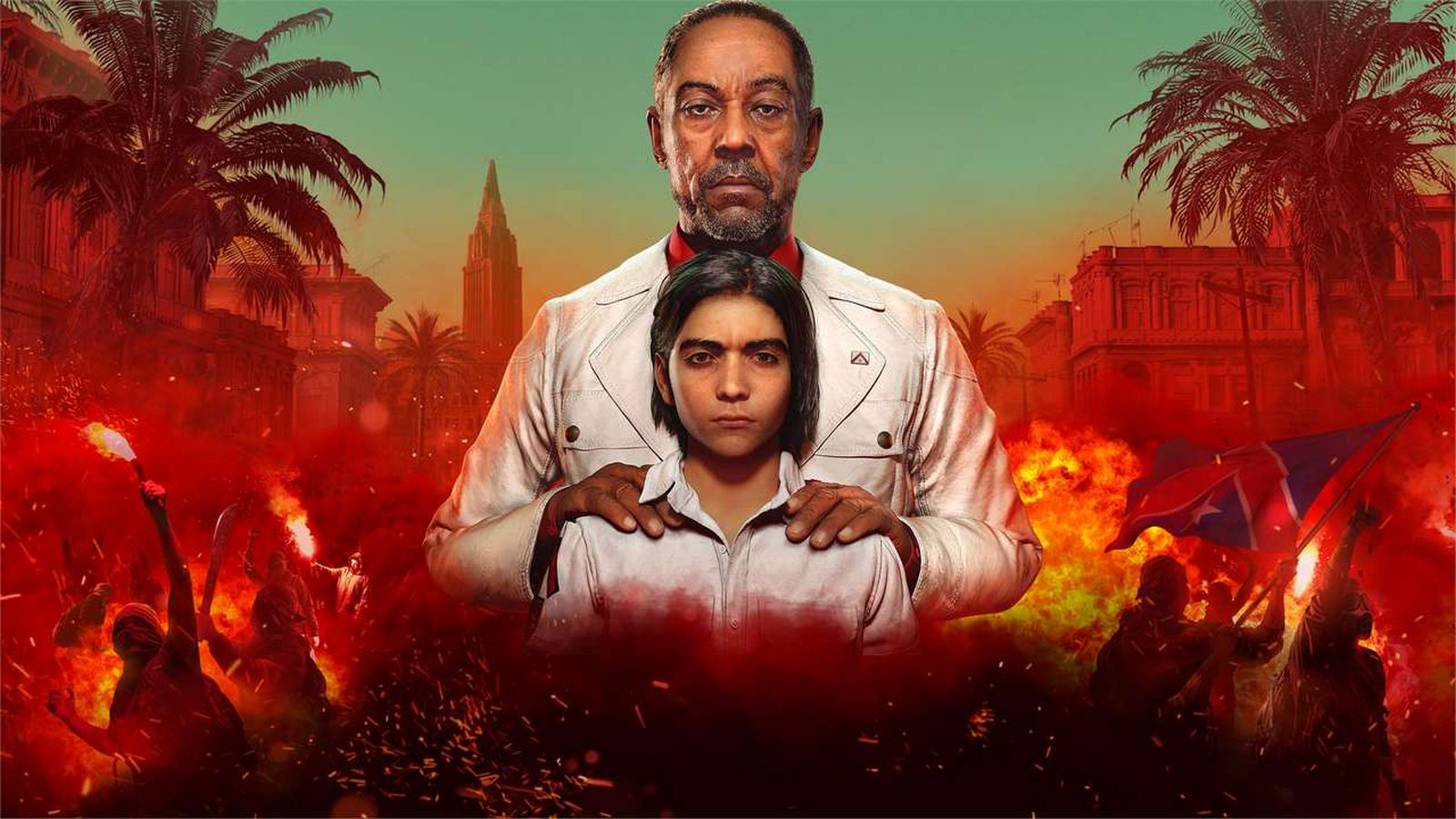 What would you give to cure cancer? If you’ve watched a loved one suffer with it, you’d give almost anything. Or would you? What if I told you that the cancer treatment you are using is being harvested by literal slavery backed by a military dictatorship fueled by brutality and death? Maybe the ends don’t justify the means. That’s the central thrust of Far Cry 6, at least as far as the hands-on preview we’ve recently had suggests.

A brutal dictator named Armando Castillo rules the fictional South American country of Yara with an iron fist. This island has been cut off from the world for decades, and Castillo’s brutal regime has become the norm for the Yaran citizenry. His dictatorship is built on a single brilliant product: Vivero. Vivero is a radical cancer treatment grown exclusively in Yara, and it forms the basis of the island’s economy. Castillo insists that the end justifies the means, and that when cancer is eradicated from the world, nobody will care how it was done. As a Yaran who has watched your friends suffer and die, you have a different perspective.

Far Cry 6 follows the life of Dani, a reluctant member of the guerilla forces opposing the Castillo regime. It’s not an unfamiliar story if you’ve played previous Far Cry games, but there are a lot of changes under the hood that make it very different. Let’s start off with the island of Yara itself.

Our hands-on experience was wide open, and we started from the very beginning of the game, but even with nearly six hours of play time, we barely scratched the surface. The journey begins on the small island of Esperanza, which serves as the story foundation for how Dani got involved in the guerilla movement. It should come as no surprise that it wasn’t an embossed invitation but I won’t say more so as not to spoil the story.

As Dani comes face to face with the cruelty of Castillo’s ambitions, she (or he — it’s an option) flees Esperanza and lands on Santuario Island. Isolated from the mainland, this is where the remnants of the guerilla fighters are tucked away, trying to mount a defense against the overwhelming military forces under Castillo. This island serves as a tutorial of sorts, introducing you to all of the new mechanics, of which there are quite a few.

Previous Far Cry games have focused on leveling up your character, mostly through picking skills to invest in with perk points to grow your strength. Far Cry 5 diverged a bit from the formula, focusing on completing challenges to build, but Far Cry 6 takes a completely different approach. Instead, the game focuses far more heavily on your equipment, with each piece of gear offering bonuses to various skills. For example, a “munitions jersey” is a chest gear piece that improves soft target, blast, and armor piercing defense. There are also additional set bonuses if you collect and equip all five pieces of this gear, so you’ll want to keep your eyes peeled. 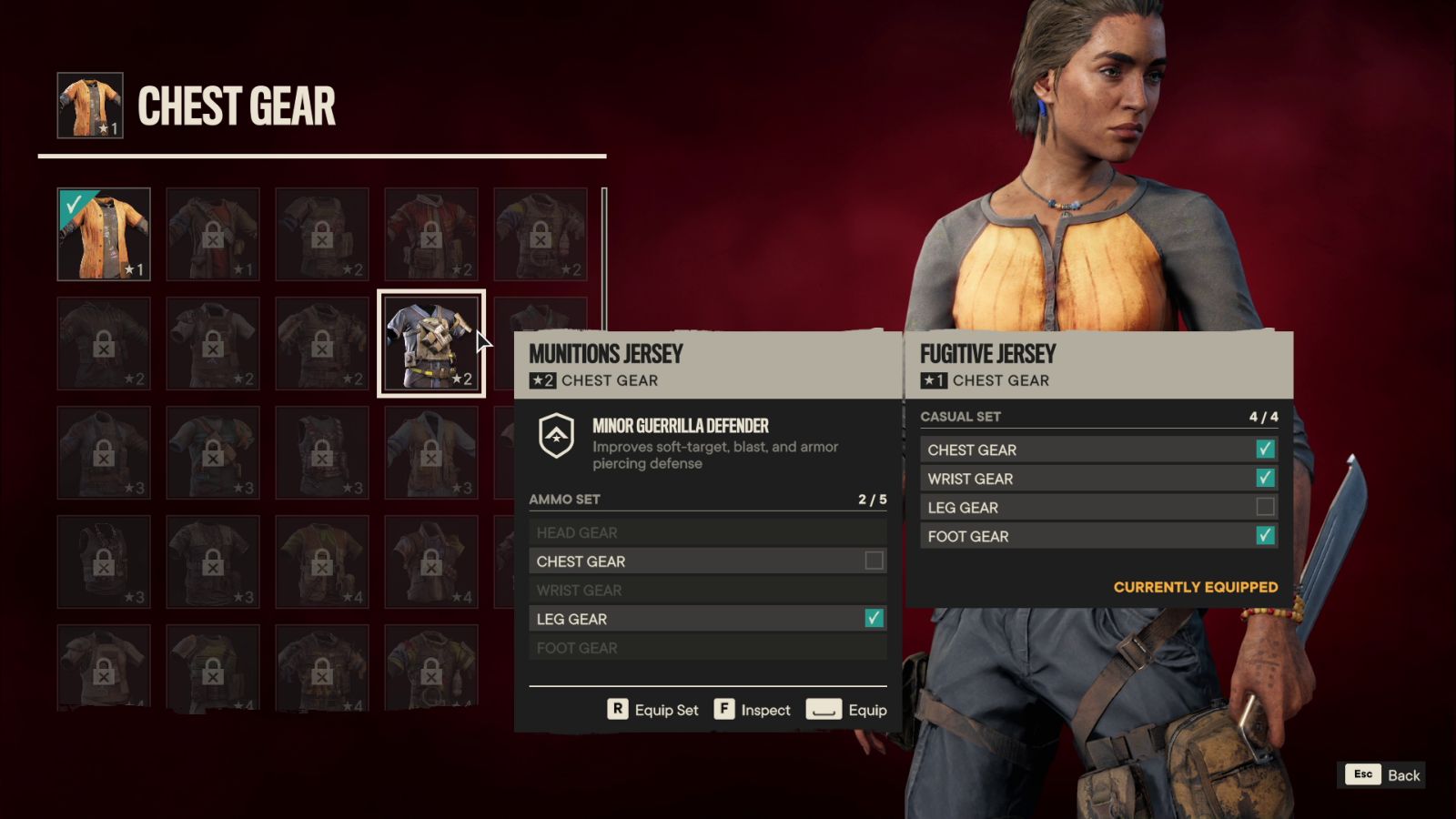 Weapons are changing as well. Each weapon has seven traits — damage, velocity, accuracy, stealth, handling, rate of fire, and magazine size, none of which is all that new, but what’s different is how the mods you attach operate. For example, it was very easy to abuse suppressors in previous games — not here as they overheat, making your gun go loud at the worst possible time. Similarly, not every guard is susceptible to the same type of ammunition, with armored guards requiring (you guessed it) armor-piercing rounds to take down. That’s not to say you can’t use standard rounds, but you are going to burn through a lot more of them, and this time around ammo seems more scarce. 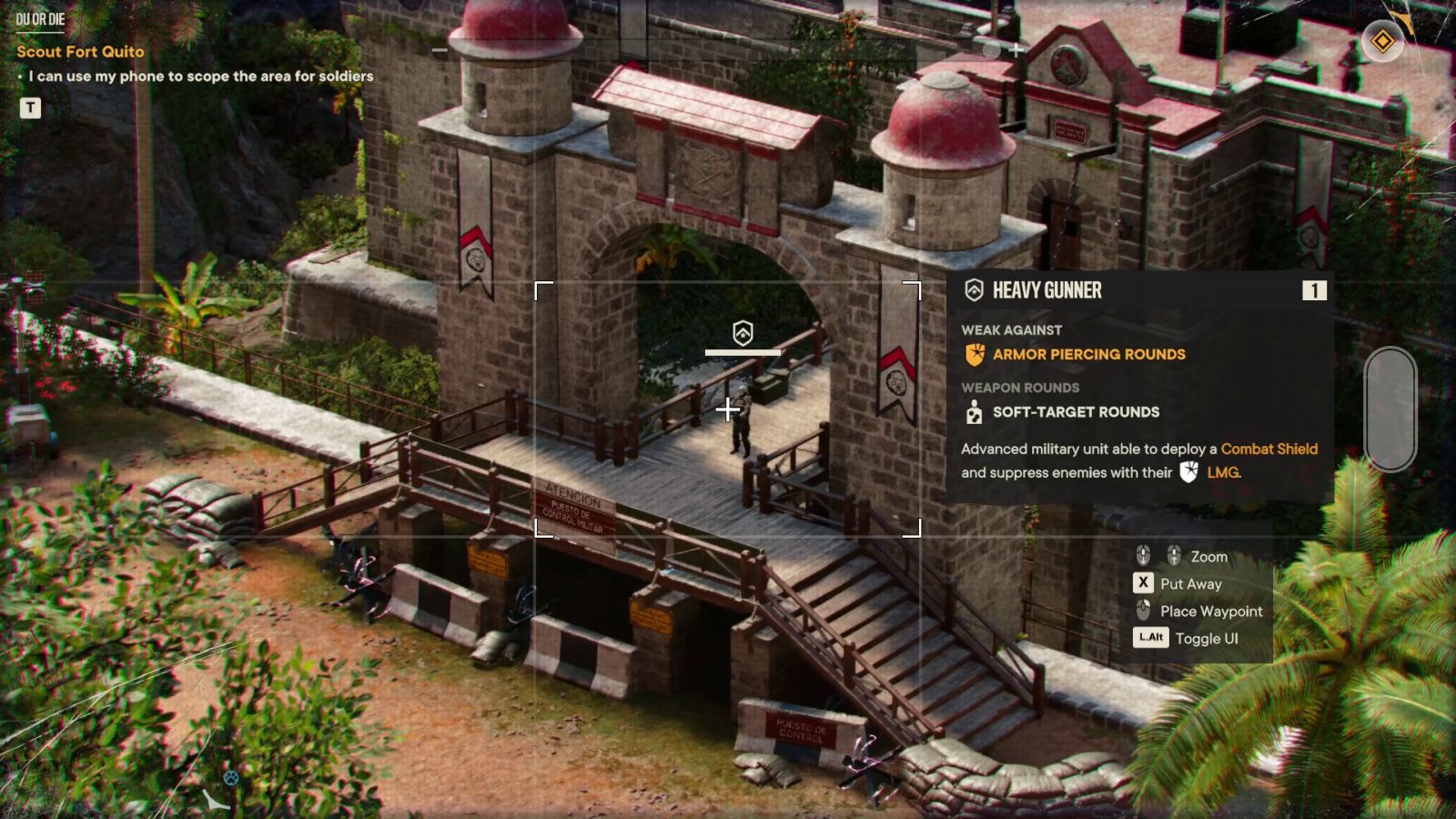 Instead of heading to the local black market to buy things, most of the time you’ll be collecting materials yourself and then crafting them at a crafting bench. Sticking with the suppressor theme, there are eight muzzles alone to choose from, with each having pros and cons. For example, the “American suppressor” slightly reduces weapon noise, slightly impairs effective range, drops velocity a little bit, and is very quick to overheat. Yep, that tracks. A Russian suppressor also slightly reduces weapon noise, but greatly impairs effective range and velocity, being slightly less quick to overheat as a tradeoff. And that’s what it all comes down to — tradeoffs. Each attachment, every scope, receiver, stock and every other piece of equipment comes with a huge amount of pros and cons to weigh before you use them. Similarly, every weapon is a choice. When attacking the Viviro Nueve Plantation, do you rely on high-penetration weapons to blow up explosive barrels to burn the place down, or do you go up close and personal with a flamethrower for a more personalized touch? The choice is yours.

Because the island of Yara has been cut off for so long, you can expect that even the military is using barely-functional gear. Little more than you’d find at the Salvation Army Surplus, most of the equipment you’ll scavenge is built from cobbled together parts. This is called “Resolver” crafting. Inspired by the real-world Cuban philosophy of repurposing and reusing everything (as they have been embargoed for entirely too long), a Yaran minigun might be built out of a moped engine with sawed off gun barrels welded onto it. The people of this fictional island are nothing if not resourceful. That leads me to the Supremos.

Supremos are “resolvered” backpacks that can be…well, just about anything you want them to be. They can be modded to belch flames at your foes, or launch a barrage of missiles. They can even be a mobile field surgeon kit, which is excellent for cooperative play. These Supremos have a fairly lengthy cooldown, so you’ll need to save them for the right time. 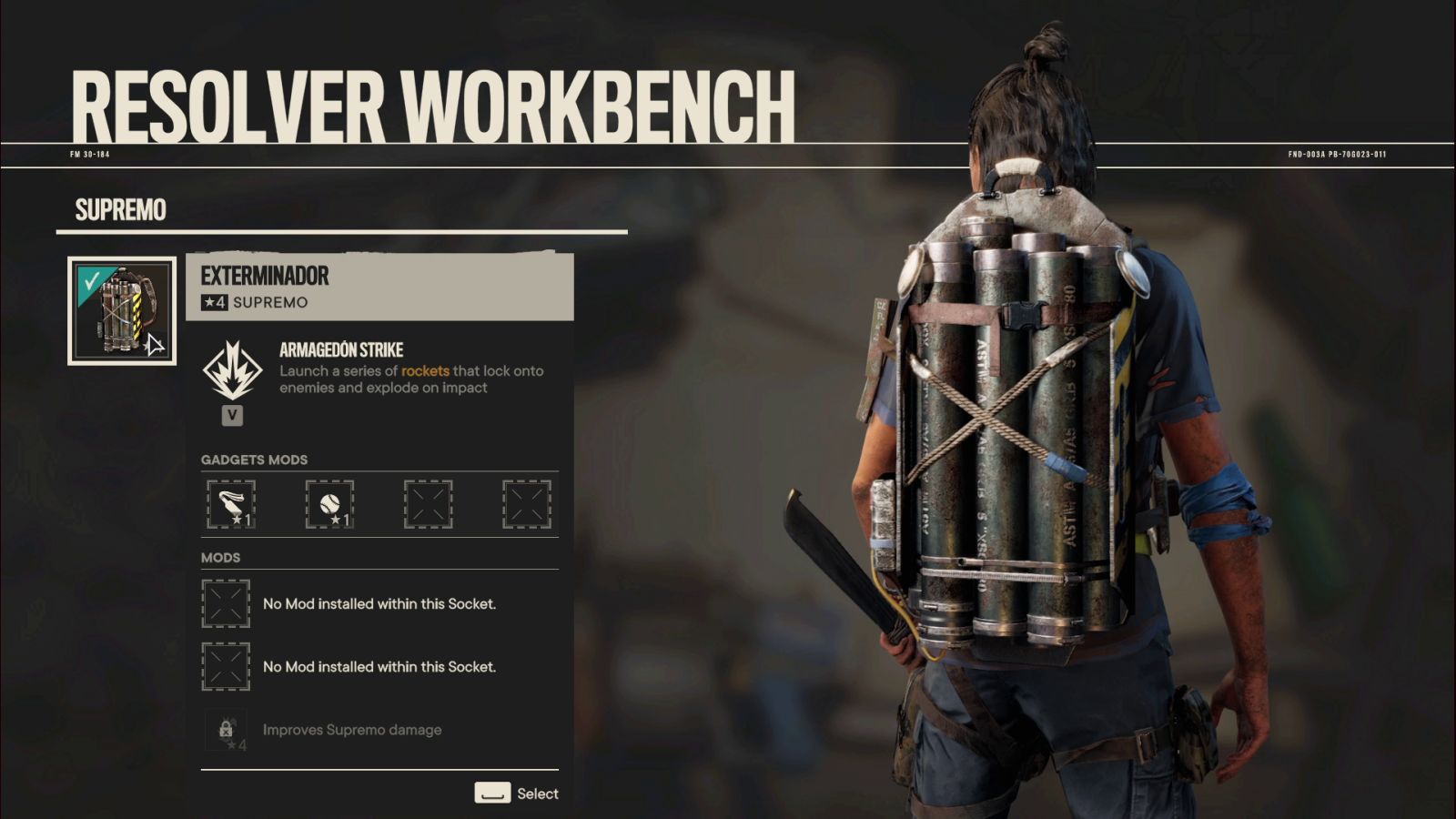 No matter what you think of Ubisoft’s open worlds, you can’t deny that they can write some excellent characters. Juan Cortez is a mentor of sorts who you’d totally share a beer with, Jonrón is one of Yara’s craziest people on the island, and Clara is a tough-as-nails leader with some cojones, but it’s the head honcho himself that really seems to steal the spotlight. Right out of the gate you’ll come face to face with Antón Castillo himself. Giancarlo Esposito does a fantastic job of embodying a man who is driven by his lust for power, with a willingness to sacrifice anything and anyone in his bid to create a lasting legacy for both him and his son Diego. While we didn’t get far enough to see how that’ll play out, it’s already clear that Diego might not share in his father’s vicious enthusiasm. 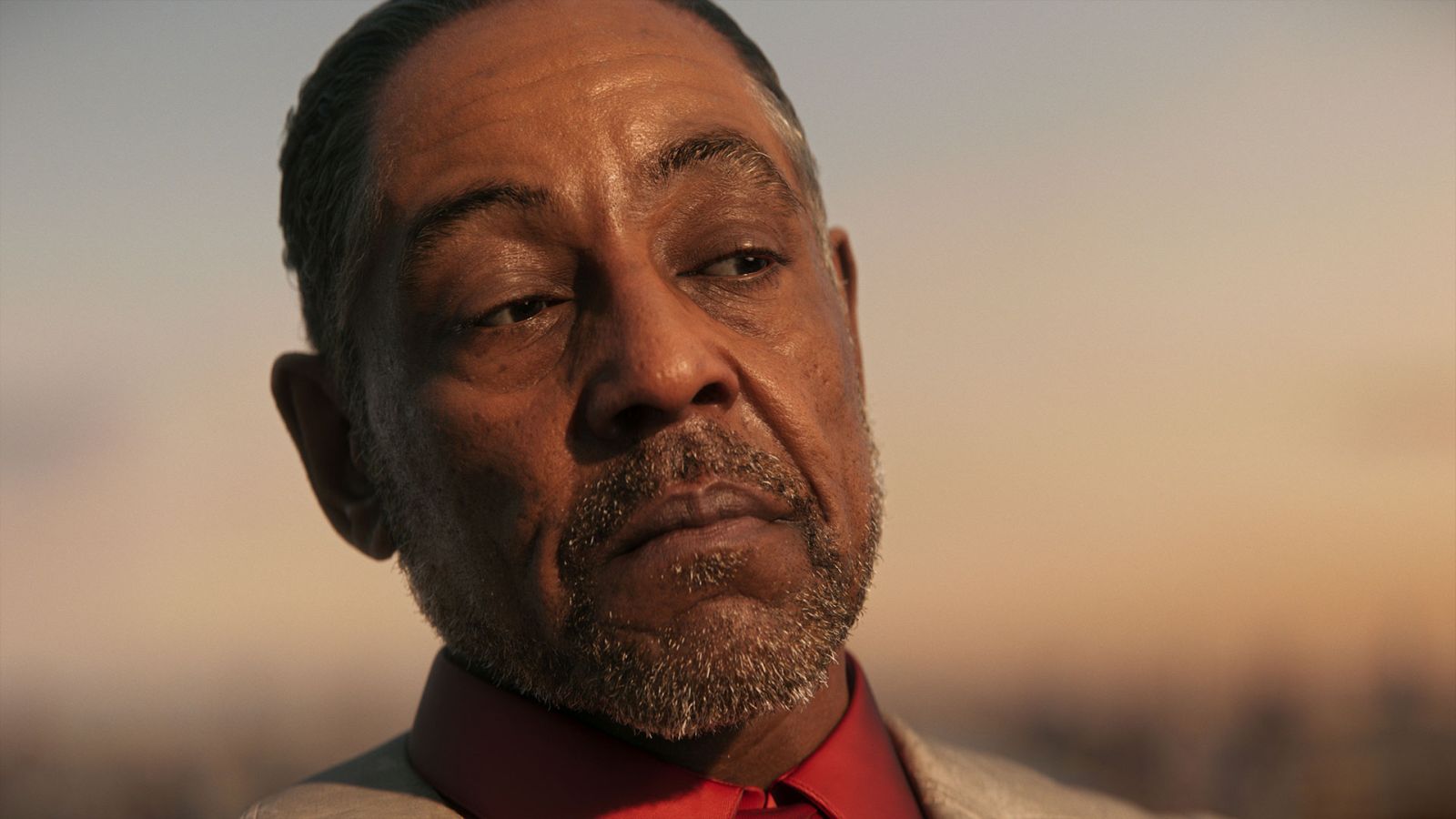 While the human characters are fantastic, it’s the littlest members of your team that really take the cake. During my time with the game I recruited three Amigos to the cause. The first was a massive crocodile named Guapo. He is hardly a stealthy character, but he doesn’t frequently leave bodies behind, so no fuss no muss. The next beasty to join my team was little Chorizo. Chorizo is an enthusiastic little puppy with mobility issues that are solved with a cute little cobbled-together wheelchair attachment for his back legs. Undeterred, this little guy will distract enemies, and if threatened, will even try to bite at them — nothing slows him down. The final recruit to join the crew was easily the most fearsome — Chicharrón. Yes, a chicharrón is normally a pork rind, but in this case Chicharrón is a massive prize-fighting rooster. How scary can a rooster be? Well, this one is equipped with massive steel-tipped talons that will absolutely mess up anything he comes in contact with — he’s an absolute beast! There are other companions to discover, but what we’ve seen so far are equal parts fun and fearsome. They all get power-ups as well, though I didn’t get far enough to unlock any. 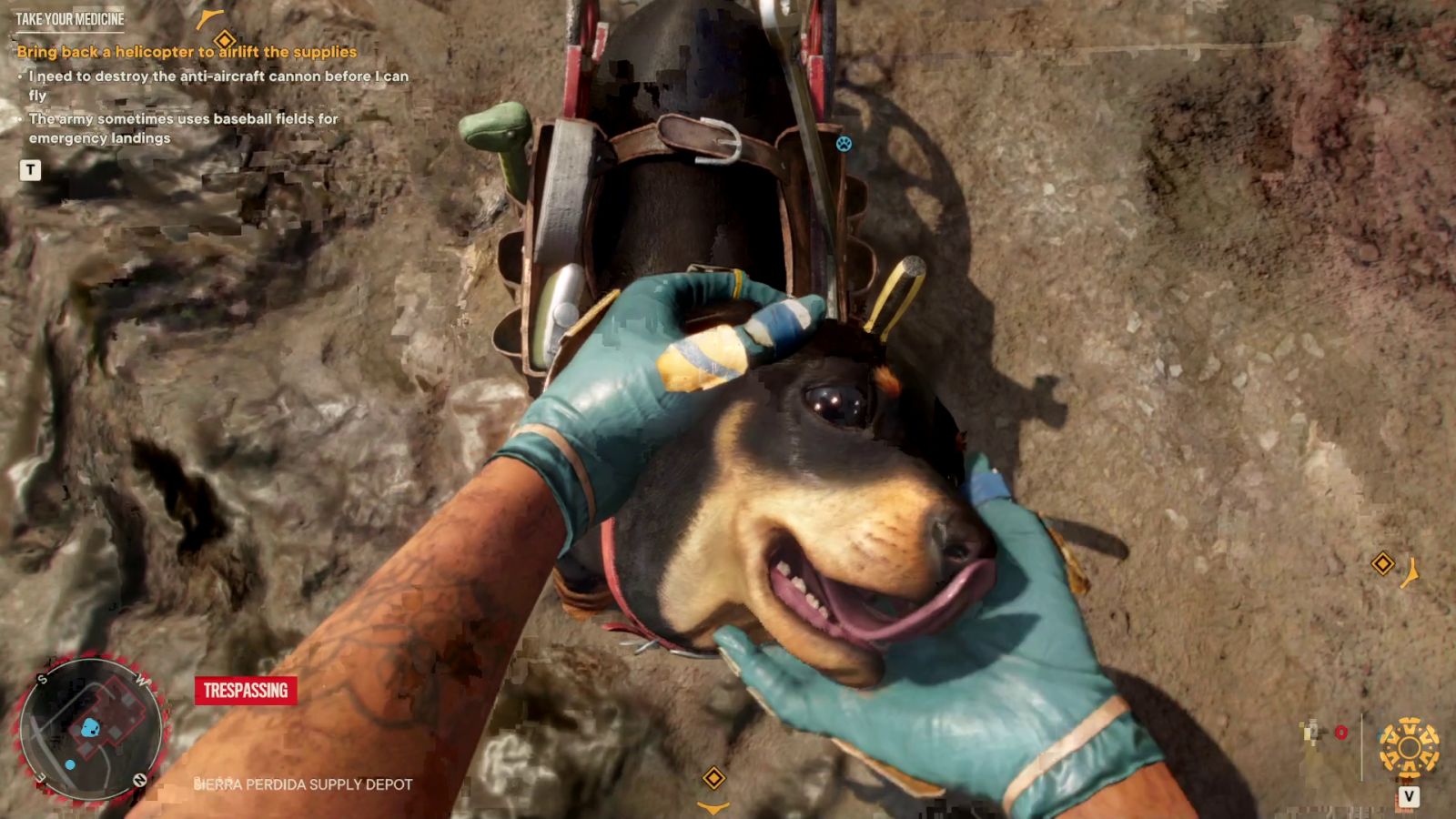 The final bit of playtime was a bit more brief, but we got to try out Far Cry 6 in cooperative mode. The game is even more fun with a second player. We tackled missions together, planning out our assaults, teaming up for vehicular action, or splitting the work as a sniper and ground-level assault team. It’ll be interesting to see how, if at all, the game changes with a second player over the long haul, but what little bit of time we did get was a blast.

Regardless of single or multiplayer, the core gameplay loop feels like it revolves around a few central elements. Your equipment is clearly the new tentpole of your character growth, pushing you to fight the situation with the right weapons and armaments for the job instead of just grinding out enough levels to tackle it. The second piece is about growing your legend on the island of Yara. Freeing outposts and helping folks will grow your influence, building the resistance, and giving you access to more equipment to do the work. As you push forward, Castillo will push back, so it’ll be interesting to see how that plays out.

There’s so much that we barely scratched in half a day of play. I hardly even got to play with the guerilla camp that you can build up, growing your vendors and adding new functions. The treasure hunts that lie all over the world will be fun distractions that could uncover the best goodies in the game. I even got a wingsuit that let me fly all over the island, as long as I started from high enough. Far Cry 6 feels like it’s the best and most complete open world the series has seen to date. I for one look forward to hearing Chorizo’s little squeaky wheels behind me the whole time while I uncover all of its secrets.