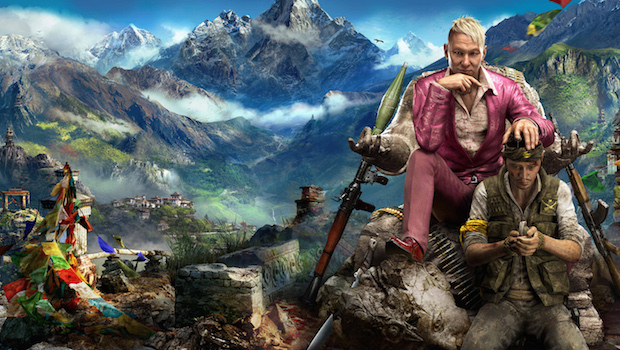 Far Cry 3’s release back in November 2012 surprised many people. At that point, a majority of people had written off the series after the lackluster second installment. But the third iteration of Far Cry ended up impressing many people, establishing a slightly silly atmosphere coupled with some very fun gameplay mechanics.  When Ubisoft announced Far Cry 4, the question arose as to if they could keep the series alive. Was Far Cry 3 simply a one hit wonder with the game mechanics only holding up through one 15-20 hour experience? Last week, I was able to get some hands on time with Far Cry 4, which gave a glimpse into a possible answer for that question.

One disappointing aspect of Far Cry 3 was its narrative, one that came off a bit more serious than what the gameplay facilitated. That persisted throughout the story leading up to one of the worst endings in recent memory, which saw you choosing between two black and white choices, only one of which made any sense. While it is impossible to say what the ending of Far Cry 4 will be, that serious story seems to have made a return. Your character’s name is Ajay Ghale, a man whose father was very popular in Kyrat, the setting of Far Cry 4. The father’s name is Mohan Ghale, and he was a large figure head in The Golden Path. The Golden Path are a group of armed forces who are fighting the government takeover being led by the malevolent Pagan Min.

Past that opening premise, you begin to see Ajay Ghale interacting with multiple people in the world of Far Cry 4. Early on, Ajay establishes a relationship with two characters by the names of Amita and Sabal. The introduction of these two end up being the opening of a large decision to be made. The choices are pretty simple, align with Amita’s plan to take down Pagan Min’s regime or instead side with Sabal. Amita has a much more realistic approach as she has heard there will be an attack on a group of men, she wants to wait out that attack and gain the Intel these men have after they are killed; whereas Sabal has a more harmonious and hopeful plan of helping out the group and instead fighting off the attackers. From there you begin to unlock a variety of missions with a multitude of people.

While the beginning of the story may be lacking in comedy, the radio inside of every vehicle is not. Once you enter any of the many trucks within Far Cry 4, you will begin to hear the witty radio DJ of Kyrat. According to Mark Thompson, Narrative Director for Far Cry 4, the crew behind Far Cry 4 knew that one unique way to add life to the world was by having a comedic radio host. To achieve that, they set out on a mission to find someone that can ad-lib certain lines but still remain clever and in-character.

Ubisoft found just that in Hindi comedian Hasan Minhaj. During my three to four hours with Far Cry 4, I heard a variety of lines uttered from the speakers that put a smile on my face or made me burst out in laughter. Thompson said, while laughing “I had so many fights with the legal department about the stuff that came out of his mouth.” Unfortunately, the amount of lines from Hasan are a bit unclear at this point, but we do know that there is around 175 percent more dialogue in Far Cry 4 as opposed to Far Cry 3. Thompson concluded his statement by saying he told Hasaan “The way we win is if somebody is driving to a mission and you start talking on the radio and when they arrive at the mission they stop before starting it just to hear what you are saying.” In more than one situation, I did just that.

The interface itself has seen a nice beef up over the last Far Cry. While Far Cry 3’s menu system was far from bad, it did have a few issues. Far Cry 4 rectifies a majority of those issues while laying a stunning Indian culture-inspired visual style over the UI. With gorgeous blue sand sliding across the screen, it is now much easier to hop from crafting to the upgrade screen and then back into action with just a few button presses. There is also very little to no downtime in waiting for the next screen to appear, meaning each menu snaps onto your screen quickly.

The solid visuals of the interface persist into the actual game as the art in Far Cry 4 is equally impressive. Every aspect of the game’s look captures the setting through lush, exotic jungles, which are aplenty. Environments and creatures alike shine with an exquisite amount of detail. The only real worry is that Far Cry 4’s enemies seem to be lacking variety, with many looking the same as the one you just killed. The map on which the artist’s hard work lays seems to be around the same size as in Far Cry 3, possibly a bit larger.

Apart from size itself, there does seem to be more to do with many outposts still waiting to be captured, radio towers waiting to be climbed, and even certain karma situations that arise. These situations will boost your karma meter and typically have you joining beside some fellow Golden Path members in hopes of achieving whatever their current objective may be. The visuals are accompanied by thumping sound design, which never ceases to impress. Each weapon has its own powerful sound that manages to add life to the machinery in your hand.

As for which machine you want in your hand, you have multiple options. The standard weapons everyone expects in an action game are present, your AK’s, MP’s, etc. But one of the more interesting options you have available to you are the signature weapons. Thompson stated that these weapons add incentive to completing side activities and are “extreme versions of standard weapons.” One of the items you can unlock contains 500 bullets and tears through everything within its path. He continued with “A smart player would take the time to get them once they become available.”

In Far Cry 3, co-op was a very linear and forgettable experience. In Far Cry 4, however, the co-op is much more seamless and allows players to jump in and out of the open world. There was not a whole lot of co-op shown at the preview event, and it is hard to judge when you are connecting to other players sitting just steps away from you, but it ran very smoothly in my experience. Activities lend themselves well to having multiple people in the game beside you. There are some extremely large outposts, named Fortresses, which contain a plethora of enemies. These gargantuan buildings are near impossible to bring down by your lonesome. Bringing in some friends is really the only way to take down these Fortresses, and doing so ends up bringing about a great amount of satisfaction.

As for the much-lauded gameplay in the Far Cry series, it returns in full force for Far Cry 4. It is clear Ubisoft Montreal recognized the successes of Far Cry 3 and brought them directly over into Far Cry 4, including the healing, climbing, crafting, and upgrade systems; most of all, though, playing the game is simply fun. Part of that fun is a testament to the controls, which provide little to no frustration and work effortlessly as an instrument to propel the game forward.

Far Cry 4’s release is coming up much quicker than expected, as it is now a little over a month away from its November 18, 2014 release date. Despite the build shown at the preview event being four weeks old, it is clear that the game is ready to hit store shelves. While some questions continue to arise about how the story will unfold, the same great gameplay manages to return from Far Cry 3 and is built upon by tighter controls and smart co-op. There is also a nice new presentation overlay and splendid visuals for our eyes to behold.

Far Cry 4’s release may be fast approaching, but if it could get here sooner, I would be grateful.