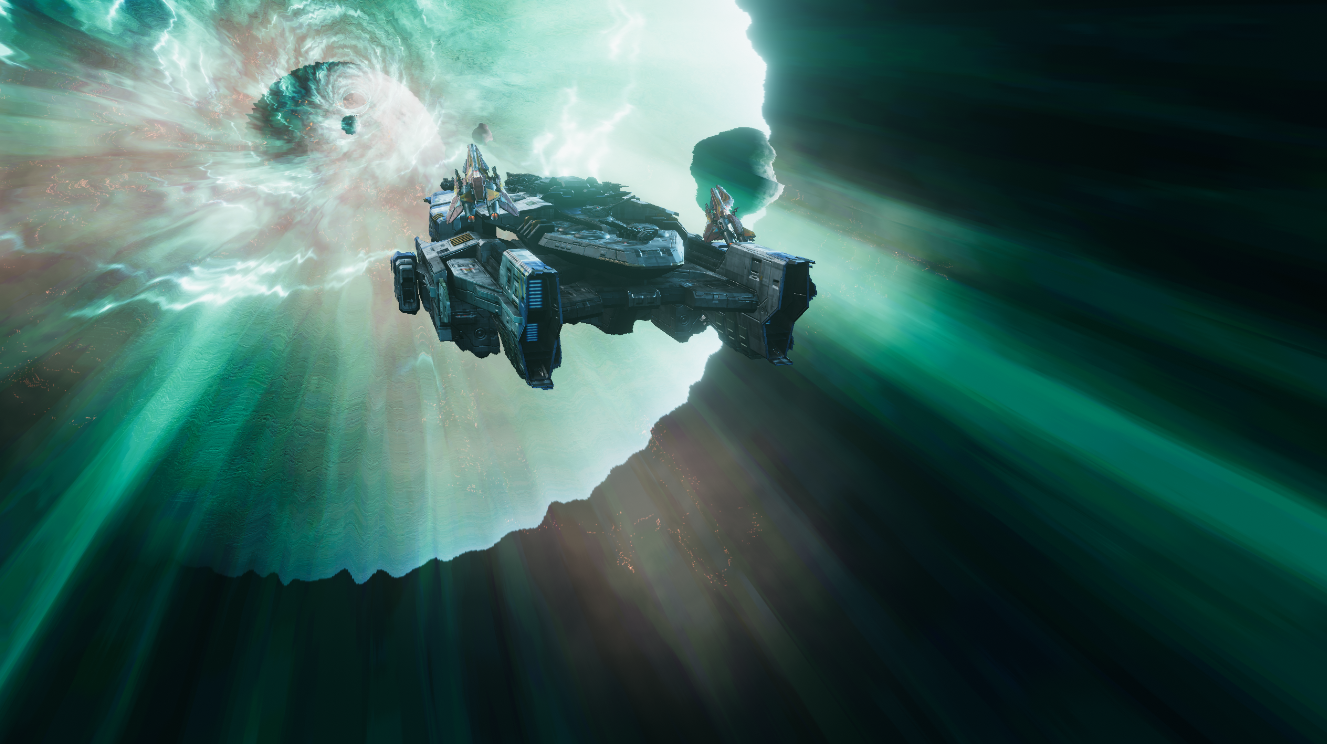 Falling Frontier is an upcoming strategy game from the developers Stutter Fox Studios, and published by Hooded Horse. It is a self-described modern sci-fi RTS with a depth familiar to fans of the 4X (exploration, exploitation, expansion and extermination) genre. The game is set on the frontier of deep space exploration two hundred years from now. The player is tasked with expanding the control of their selected planet along with creating and protecting supply networks between different colonies.

Physicalized resources are the buzzword term used to describe the game’s unique features, but the system the term describes is worth the attention. All resources in the game have physical models and actually have to travel from place to place. This means that supply lines have to be set up between different colonies and ships to ensure the survival and productivity of the player’s fleet. It also means that supply lines can be intercepted in real-time, which is true of both of the player’s own lines and that of the AI’s. Players can create quotas on each of their bases, ships and stations to ensure that existing supply chains continue to ship resources. Although these shipments are automated, they still run on the physicalized system. Coupled with the sleek UI design, this resource system looks addicting and fun to manipulate. 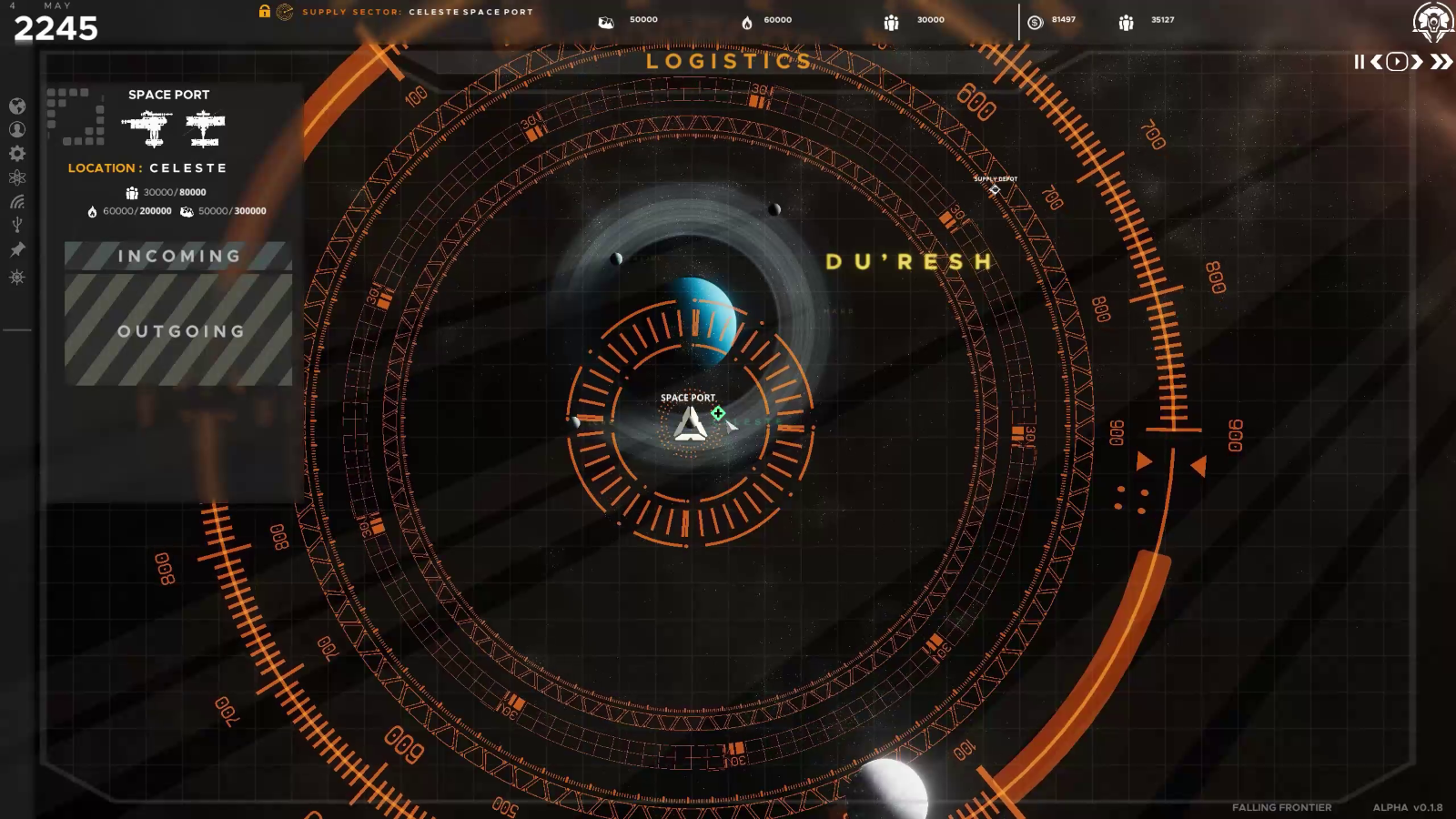 Exploration in the game is all dictated by line of sight. Probes are incredibly important in Falling Frontier, and they can only be sent to places that are in line of sight of their original location. Probes send back information about resources, wreckage, new celestial bodies, or enemy ships. Sometimes the probes do not send back information, however, this can happen when the probe breaks down or is destroyed. When the probe is destroyed it is not clear to the player as one can never be sure that it did not just break. This keeps the player in suspense, but not completely without options. Space flight looks great here with ships spewing out beautifully detailed particle effects while cruising. When initiating their jump drives, the ships have a weighty animation reminiscent of Star Wars star destroyers zooming into frame. Except here, the ships look sleeker and accelerate less suddenly.

Combat in the game has the advantage of utilizing those particle effects mentioned above, but it shines due to the customization available for each ship as well as the simulated projectile system employed by the game. Ships can be customized inside and out; weapons and chassis on the exterior can be swapped out for others, while jump drives, hull integrity, and storage units can be developed on the interior. Each ship has its own character depending on how the player chooses to customize it, so battles will stay fresh. The projectiles in the game are all simulated in real time rather than precalculated; this means that every shot has the potential to penetrate through targets, ricochet off of materials, and react according to different situations. The developers say they put fun factor over everything while still valuing the sense of realism that they are going for, and it shows. 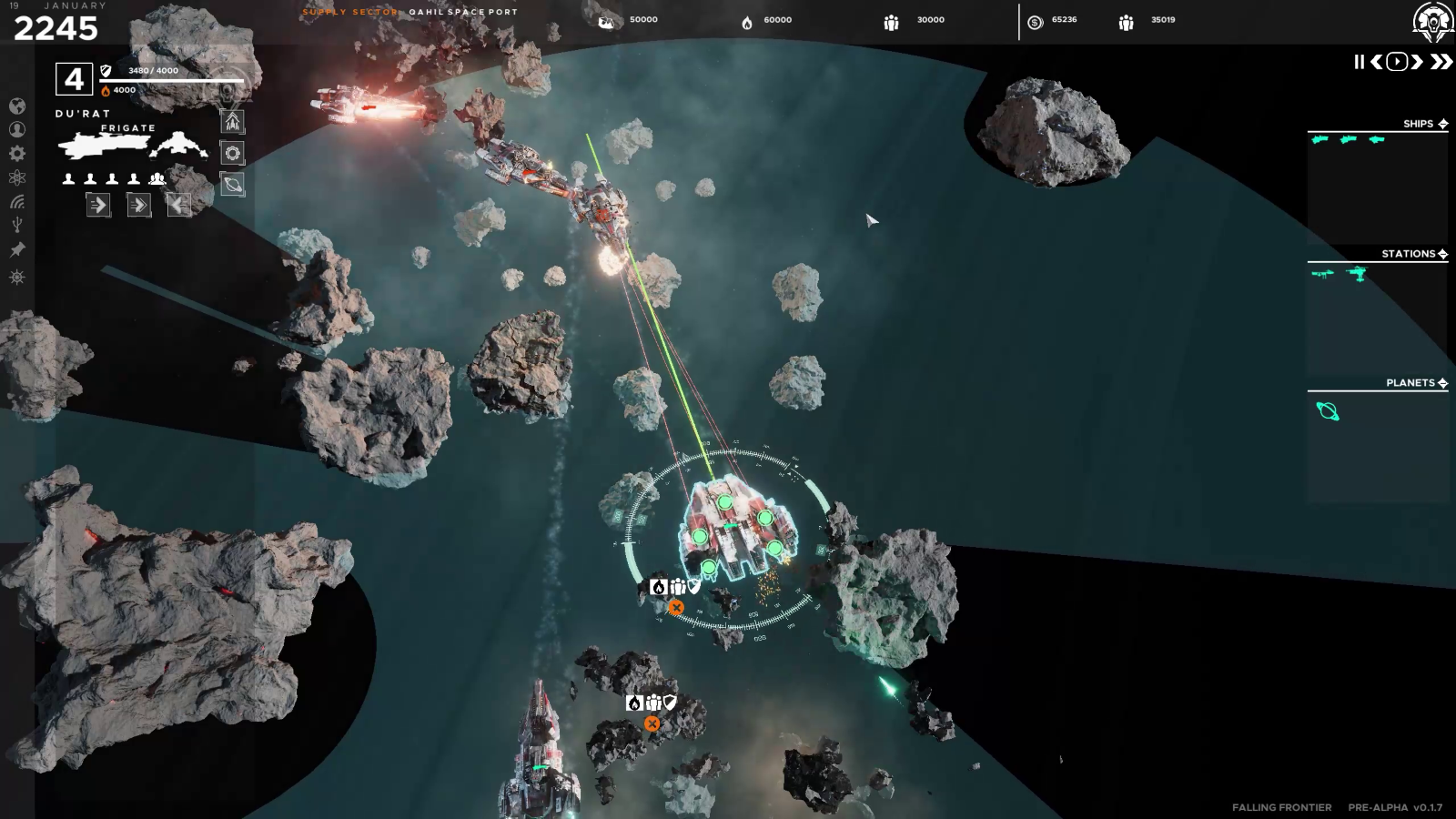 Something not always at the forefront of other RTS games is a deep tax system, but that did not stop Stutter Fox Studios from including one here. Everyone pays taxes in your crews and colonies, but those who are in space receive tax cuts for serving in the hazards of the unknown. When you make the decision to attack a supply line, or send more troops on a rescue mission to salvage citizens and supplies, Falling Frontier asks you to make a decision not just about lives but about revenue as well. Here is a video explaining the economics systems with more detail:

Until now, the developers have never announced this to the public, but the 1.0 build of the game will come with a Scenario Creator that allows for players to build their own maps out with celestial bodies including stars, planets, gas giants, asteroids, and more. Almost everything will be customizable including the color and sizes of stars, the types of planets added, and the names of systems and areas. The developer mentioned that this newly announced game mode is still largely “function over form,” but the UI is already in line with that of the main experience and looks great.

Falling Frontier is slated for a 2021 release date on Steam, and it looks like a must have for fans of RTS and 4X experiences.

For gaming news and all your E3 coverage, stay tuned to Gaming Trend.