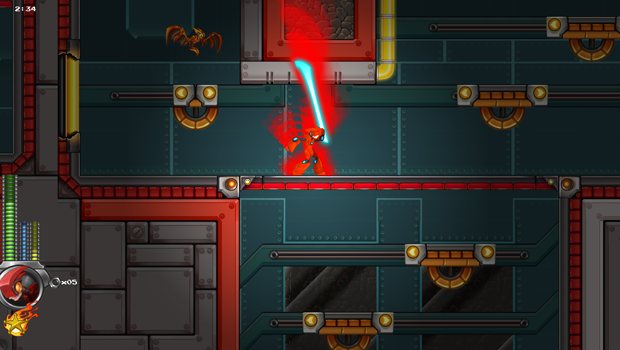 At this point it’s safe to say that “roguelike” has made its way into most gamers’ lexicons. Dynamic level generation, punishing difficulty (often with permadeath features) and more are associated with the term, which is now being used to describe titles in more and more diverse genres. Batterystaple Games seems seeks to bring some of that roguelike experience to the platformer genre, courtesy of its successfully kickstarted title Echoes of Eridu. I managed to sit down and spend some time with the alpha build of this one to see just how the progress is coming along. The fast take? Echoes of Eridu is off to a good start, combining some classic 2D platformer action with decent chiptunes music and a loot/customization system that’s starting to show off some of its potential.

Echoes of Eridu has some big expectations to live up to. Rogue Legacy already brought some of the dynamic-content, quasi-permadeath experience to the platformer genre, and managed to pull off one of the funnest indie games of the year as a result. Add in the fact that the Kickstarter page explicitly compares the title to Mega Man X – one of the most critically acclaimed 2D platformers of all time – and it’s clear that they have their work cut out for them. We’re talking games that not only had fantastic gameplay, but some great graphics, good music, and even an engaging story. Obviously an alpha isn’t going to be quite up to that level, but so far it looks like the team is working its way towards a solid title.

The gameplay itself is pretty straightforward. You start off by selecting one of (currently) two different characters – the projectile-equipped Nina, or Ace, whose main attack of choice is melee sword-swinging. Alternate and special attacks are available as well, as well as a few slots to place discovered upgrades into – after all, what’s the point of a roguelike game with no loot to speak of? These upgrades primarily alter the base statistics of the characters – speed enhancement, damage enhancement, and so on, though it’s also possible to change alternate attacks as well, opening up the possibility of serious customization as work progresses on the title. As it stands, the gameplay I’ve seen in the game was pretty tight considering the stage of development it’s in. With controller in hand I quickly was able to run around, slicing up enemies, jumping from platform to platform, finding secret rooms and even getting in some upside-down anti-gravity action here and there.

Right now, the enemy AI you run up against is a bit on the simplistic side – enemies shoot, they chase, but there’s little else to them beyond that at the moment, with bosses in particular coming across as placeholders (the ones I ran into have merely been larger, more dangerous versions of the critters already running around in the game as trash mobs.) The maps, however, are already starting to show some impressive progress – the layouts of some of the areas are well thought out, requiring careful jumps in order to proceed, without feeling unfair. I’ve even discovered some secret rooms here and there, finding little caches of additional loot to add to my ever-growing pile of enhancements while making my way through these alpha-level stages. In addition to those rooms, environmental hazards abound – there’s lava and other health-sapping threats to avoid in addition to the monsters, as well as the tried-and-true gaps in the ground that can send your character falling to their death if care isn’t taken.

Graphically the game is shaping up nicely – a bit simplistic on the animation so far, and with only a small tileset at the ready, but what’s actually present is nicely crafted, having a kind of 2D Phantasy Star inspiration going on. Heavy on the glowing, the neon, and the high-tech feel in general. The music also helps set that high-tech mood, since chiptunes are thus far the order of the day – something I welcome, being a big fan of that style of music ever since its inception. The audio is a bit lacking right now, but that’s no surprise for an alpha; outside of games where the audio takes center stage for the gameplay, it’s rare to find a game that finds its audio ‘voice’ until around the end of its pre-release development life.

It’s no easy task to put together a roguelike platformer with Mega Man X inspirations, but so far Echoes of Eridu looks like it holds a lot of promise. We’ll be keeping an eye on this one as the development progresses towards its inevitable release, and as more monsters, unlocks, map-randomization and more make their way into the game.