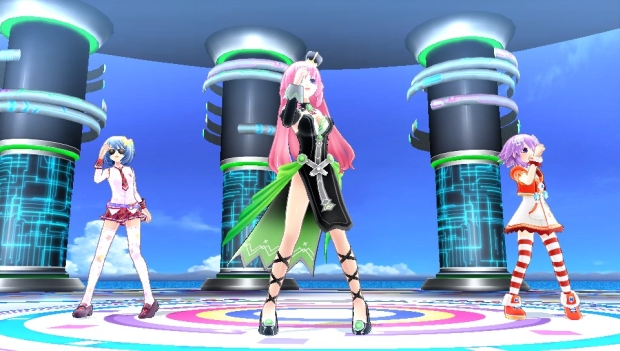 Occasionally you hear of a concept so crazy that you think that there’s no way that it can work. When Final Fantasy X-2 was released with the concept of a pop band switching the characters’ wardrobe to change their class and abilities while fighting enemies and leveling up, it actually worked. While the concept was odd, the game supported the mechanics. The Hyperdimension Neptunia series has had its fair share of parody and strangeness, but it had a solid RPG experience behind it. I was expecting something similar with Hyperdimension Neptunia PP, but after popping the card into the slot, I experienced something unexpected.

The latest problem in the land of Gameindustri where the four main characters, or goddesses, live doesn’t involve monsters lurking about. Instead, pop stars have become too popular and people are listening to music instead of playing games! Because of that, the goddesses (also called CPUs) decide that they should all try to become pop stars. All good musicians need a manager, and you have been whisked out of your bedroom into their virtual world to lead them, the day before your summer vacation and the latest major gaming release hits the shelves. Lucky you!

Directing a female to be a pop sensation should be fun, right? Well, it is great if you like menu choices. You start with one CPU, helping her to earn popularity and increase her stats like trust, vocals, rhythm, expression, and knowledge. If you have them work for the day, they can take part in an ad campaign, record a song, or try to recruit other CPUs to join the current lineup. Lessons in voice training, dancing, rehearsing songs, practicing their concert routine, or studying books can be taken. Each of these helps to increase their stats and get better at performing.

Training to be a pop star is tough work though, increasing their stress. If their stress level goes all the way up to 100%, the game is over and you lose. To relax they can take three days off to reduce a large amount of stress, refresh by taking just a day off, or interact with other CPUs by the day by spending time in the park or some other location that they decide upon. You can also spend time with the CPUs and try to get to know them more intimately.

Eventually to gain fans they need to perform concerts. However, they need stat called Guts, which is basically courage, to be able to have the confidence to perform in front of a large audience. Concerts are the only truly interactive part of the game. When you perform a concert, you pick out the stage, song, and starting position of each CPU. You learn songs as you continue through the game, but the list is small and repetitive. During the concert they sing and dance while you add effects and control the camera. It’s kind of like the camera mode in the Dead or Alive Xtreme Beach Volleyball games, except a little less creepy. The better your camera work and effects timing, the more you please the crowd, helping you gain more fans in the region you are in. The CPUs have different popularity in each of the four regions, so you may have to take a day to travel to different regions to get popular enough in all regions.

You win by increasing the popularity of the CPUs to overtake the other groups, especially the most popular MOB48. You have to do it in a certain time period though, or else you will lose. Each action takes a “day” of game time, but in all honesty most take a couple of minutes. The only real interaction you have with these characters is text on the screen. It wouldn’t be so bad if the CPUs had something important to say, but I swear these are the some of the most soft, spoiled, and obnoxious “goddesses” ever. It doesn’t help that your decisions don’t feel like they have much weight, but the constant complaining gets old quickly.

Unlimited Concert mode lets you put on concerts constantly, and a Viewer mode lets you view the CPUs in their different outfits. It also lets you use the touch screen to “poke” them, making it even creepier than the camera mode of DOA Xtreme Beach Volleyball. The less said about these modes, the better.

I have a hard time recommending Hyperdimension Neptunia PP to anyone but the most avid fan of the series, and even then I hesitate. The game feels like a cheap mobile game where all you do is select menus to progress your characters without having to do anything to determine how much they increase their stats. I’ve felt more interaction while reading a choose your own adventure book. Buyer beware.